Is News Still Fit to Print?

As newspapers nationwide continue to cut back on printing to save money, the Pittsburgh Post-Gazette has retained at least some print element of its publication. 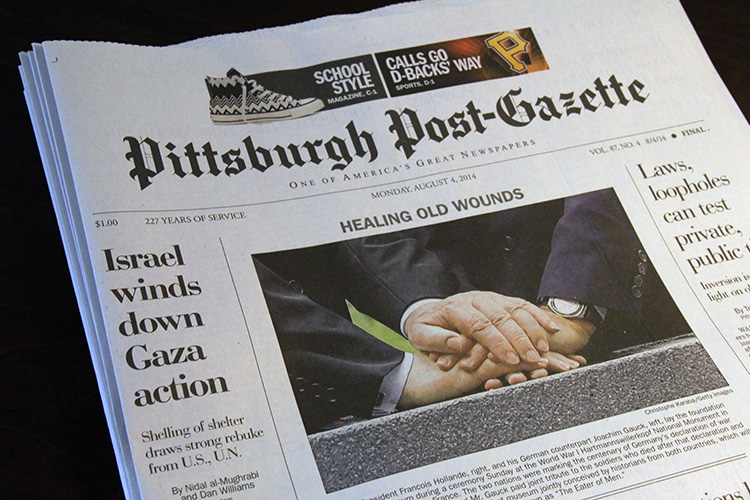 photo by can pac swire via flickr creative commons

It’s been a point of local pride that Pittsburgh has retained two major daily newspapers, providing competition and differing perspectives for consumers.

Across the country, newspapers have been closing or going online-only in response to rising print costs and digital use; other publications have reduced the number of editions they print each week. In late June, the Pittsburgh Post-Gazette joined the latter group, announcing it would cut two unspecified days of printing. The move comes on the heels of the Pittsburgh Tribune-Review’s 2016 announcement that it would stop publishing a print edition altogether. A digital copy of both papers will continue to be available online seven days a week.

“We believe we have the best digital platforms,” said Allan Block, chairman of Block Communications, which owns the Post-Gazette, at the time. “We are maintaining our news department and the quality of the Post-Gazette. We have no plans to cut back our commitment…”

The news was a major blow to PG employees, many of whom took to social media to express their disappointment — frustrations exacerbated by a heated union dispute earlier this year between employees and the Block family. Michael A. Fuoco, an enterprise reporter at the PG and president of the Newspaper Guild of Pittsburgh, said in an email: “While I’m disappointed it has come to this, the public needs to realize we journalists will still be working and publishing our work seven days a week, it’s just that two of them won’t be in print.”

What does this mean for the future of print? According to Andrew Conte, head of Point Park University’s Media Innovation Center and a former Trib employee and current contributor to the paper, more print cuts will likely come.

“It’s not hard to imagine the newspaper cutting back more days in the future — or moving away from delivering or printing a paper altogether,” Conte said in a statement. “Newspapers have been losing money on printing and delivery for years.

“Based on trends, it’s not hard to imagine Pittsburgh — like many American cities — will be without any printed newspaper in the near future,” Conte said.