Plus, the JACK Quartet pushes boundaries at The Warhol and the red carpet awaits at Lights! Glamour! Action! 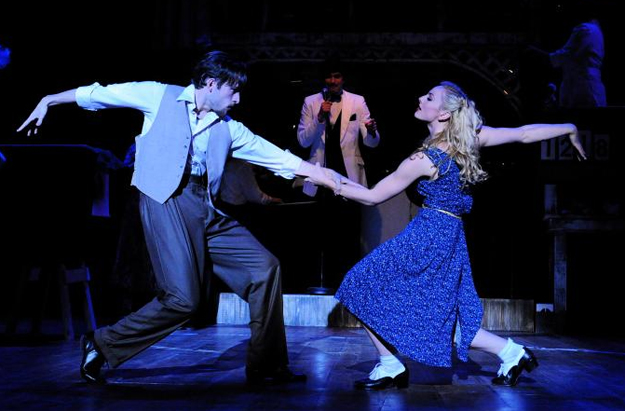 UNUSUAL STUFF, FROM OAKLAND TO DOWNTOWN TO WASHINGTON
Spring and winter are currently locked in their annual deathgrip, wherein moments of sunshine and thaw are broken up by the angry return of snow and plummeting temperatures at the exact moment you decided it was warm enough to leave your winter coat at home. The point? Don’t chance it. Find indoor activities. Like seeing a show at the theater, for instance. A trio of unorthodox choices awaits.

Point Park’s Conservatory Theatre Co. has a world premiere called Marathon 33 to offer; the show focuses on Depression-era dance marathons and “[mixes] elements of vaudeville theater, burlesque, music hall and new media with a heavy dose of sadism and masochism,” as they put it.

Meanwhile, envelope-pushers Off the Wall Theatre, based in Washington, Pa., are presenting And Baby Makes Seven, a decidedly out-there domestic comedy about the perils of introducing a surrogate child into a relationship when the partners already have several imaginary children running around the house … or something like that.

Even the Public Theater is thinking outside the box with Freud’s Last Session (opening next weekend), an imaginary meeting between the staunch atheist psychotherapist Sigmund Freud and outspoken Christian writer C.S. Lewis.

(UNUSUAL) ENHANCEMENTS TO YOUR OSCAR EXPERIENCE
For most, the only extra step they take to prep for the Academy Awards is buying the indulgent kind of microwaveable popcorn at Giant Eagle. Or maybe plunking down 10 bucks in a massive Oscar pool at the office. Well, this year will be different. Grab a cocktail dress or a black tie and head down to the Pittsburgh Film Office’s swank “Lights! Glamour! Action!” Oscar-night party at Heinz Field to watch the stars in style. Or, for a more educational approach, check out the workshop and celebration hosted by Steeltown Entertainment Project and the Sen. John Heinz History Center.

Get all the details and enter to win two tickets to "Lights! Glamour! Action!" in this week’s After Dark!

THE SLIGHTLY UNUSUAL JACK QUARTET PLAYS AT THE WARHOL
Pitt's Music on the Edge shows can vary greatly from performance to performance; the series has dealt with everything from bizarre compositions played on one-of-a-kind instruments to lush concertos. Next on the slate is an appearance by JACK Quartet, a group of string virtuosos out of Rochester’s famed Eastman School of Music. The four are almost solely focused on pushing the boundaries of their medium, frequently premiering new works (as they will at this concert, when they debut a composition by Pitt’s own Amy Williams).

Their eclectic and interdisciplinary concerts are in high demand worldwide; later this year, they’ll embark on a ramble around the globe with pianist Maurizio Pollini that will take them to locales such as Switzerland and Japan. But thanks to Music on the Edge, you can catch the Quartet at The Andy Warhol Museum this Saturday.

In Theaters This Weekend: While most people will be catching up on their Oscar movies this weekend in anticipation of Sunday’s awards show, you’re already set … right? No scampering out to the theater for last-minute showings of The Artist or Hugo, no on-demand purchases of The Help or Beginners. You’ve seen ’em all! In fact, you’re only worried about new releases, like the Navy SEAL flick Act of Valor, the Jennifer Aniston romcom Wanderlust, the Amanda Seyfried thriller Gone and Tyler Perry’s Good Deeds …  aren’t you? Either way, PM Film Editor Sean Collier has you covered. He’ll appear on the 102.5 WDVE Morning Show Friday at 7:15 a.m. to review Act of Valor and Wanderlust — and give his Oscar picks, too. One way or another, get to the cinema! And tune in Friday morning to 102.5 FM or DVE.com!

This weekend, check out the Monroeville Home Show, a four-day extravaganza of displays, free samples and how-to seminars. Discover the latest tools and trends in contemporary gardening and remodeling—and get that sledgehammer ready. Click here for more.

This article appears in the February 2012 issue of PMWeekend.
Categories: Things To Do