From a young age, Eric Silver had a knack for investing. But the lessons he learned in college inspired him to take another route: establish an online startup that provides impartial facts about anything from Volvos to tents. 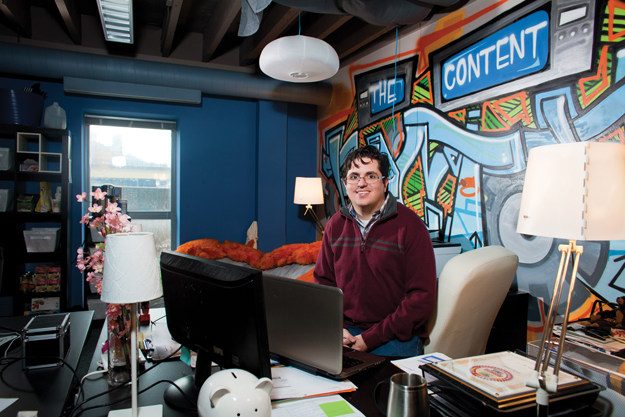 At the moment, Eric Silver is the founder of Pikimal (pronounced “pick ’em all”), a startup based on the North Shore. But Silver has already lived several lives. He grew up in California’s Bay Area, traded stocks as a teenager and attended Carnegie Mellon’s Tepper School of Business. In a hairpin turn, Silver served a two-year stint in Armenia with the Peace Corps. Upon returning, he worked in marketing for ModCloth, the popular vintage clothing company that was birthed in a CMU dorm. He left the company in 2009, moved to the East End and bought a house with his fiancée, Kelly Chase. And following a motorcycle accident, he came up with Pikimal and founded the company in 2010. Got all that?

At 34, Silver is an energetic, good-humored entrepreneur with a passion for innovative business. Pikimal is a website designed as a decision engine that uses consumer input to help you choose the best products; similar to Consumer Reports, it allows shoppers to sort, compare and review unbiased facts and specifications of thousands of products. Whether you’re researching TVs, ski boots or cars, Pikimal helps consumers make the best buying decisions. Silver spoke with Pittsburgh Magazine about the origins of his plucky little business.

So why try a startup in Pittsburgh?
I like it. [Laughs] My fiancée and I bought a house here. I could never have bought a house in the Bay Area. I think it’s an enormous advantage for us to be in Pittsburgh instead of Boston or Silicon Valley. While it could be challenging to hire an experienced startup executive team in Pittsburgh, we haven’t had any trouble yet. Money is at a premium, but you’re also trying to find people who are talented and diverse.

Where did you come up with the idea for Pikimal?
It’s hard to figure out for sure what the moment of inspiration was. I was taking marketing classes, and I realized that people are hacked [by advertising]. A marketer knows how to convince people to buy something that’s not in their best interest. We thought the Web was going to fix that — but when you look at the Web now, you see the opposite. We’re trying to figure out how to create an engine that’s not driven by advertising.

It’s a very unique name, kind of like a Pokémon character. From where did the name originate?
[Laughs] “Piki” is meant to be a “Wiki” for “picking.” It’s all of the items combined with all the preferences of the masses.

Where did you find the capital for a startup?
I went out to fundraise. Something like 95 percent [of our income] came from the West Coast. Capital is pretty mobile.

What are the unique pleasures of having an Internet startup?
I like the complexity — I probably thrive on it. But my hope is to give something back to people that is just as simple as Wikipedia. What we’re doing is fun — it’s nice to be in an environment where there are problems that no one’s solved before. But there’s another part of this story. I’ve also been an investor for local startups. When I was a kid, my grandfather died and left me about $7,000. I invested in some shares, and that stock did very well. I started going to UCLA in 1995 and started investing again. The truth is, it didn’t change my life at all. I really thought it would. If you had asked me what I wanted to be when I was 15, I would’ve said, “Rich.” But it didn’t matter. So I joined the Peace Corps. It speaks of some real turmoil. What are my values? What do I want to do now with my life? When I started Pikimal, we originally thought it would be a not-for-profit. But it’s harder to do big things as a not-for-profit — it was really hard to raise money.

But the funding worked out.
We actually raised more than we were looking for. I went out [to the West Coast] to raise a quarter-million dollars, and I raised $2 million. I received a call from an investor, who said that we needed to move faster. At first I was worried — but then he said, “We think you need more money.” It’s the kind of phone call you love to get.