Inside Choderwood: A Hidden Oasis on the Allegheny River

Steve Choder and Jody Noble-Choder have created a secret garden within their whimsical riverside retreat tucked in the middle of an urban area. 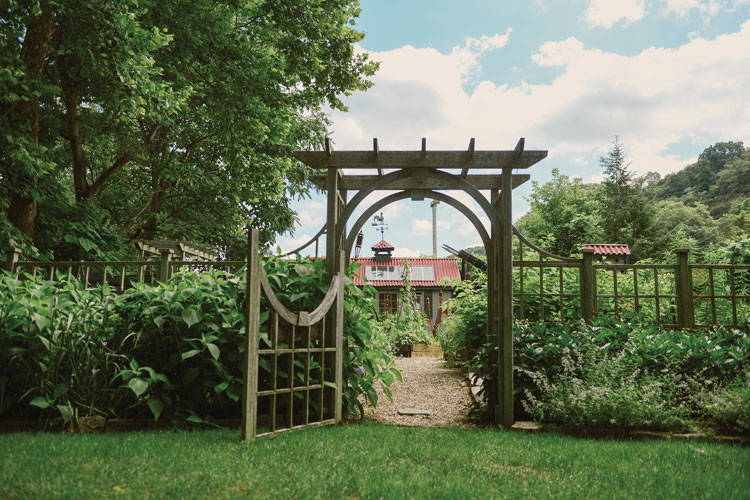 Daily commuters of Allegheny River Boulevard probably think they know every detail of where the artery intersects with Washington Boulevard — the cars that back up on the ramp leading to the Highland Park Bridge around rush hour, the nearby entrance to the Pittsburgh Zoo & PPG Aquarium and, on the riverside overlooking the Allegheny, a former asphalt-making plant owned by the city of Pittsburgh.

But if you turn into the industrial-looking parking lot sitting at the crossroads of the busy intersection, you’ll see that it’s not a dead end. There’s a lane connected to it. And that lane leads to a 9-foot-tall fence with a cheerful mural on it that at once welcomes you to Choderwood and also shields it from view. 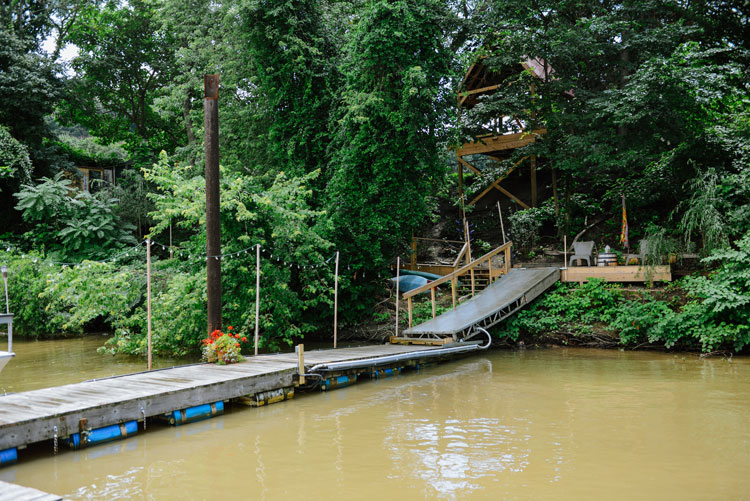 Stretching across almost an acre of property, Choderwood is the whimsical riverfront retreat owned by Steve Choder and Jody Noble-Choder that plays host to a variety of weddings, corporate getaways and other events.

“It’s a great spot,” says Caroline Wentling, a member of the Garden Club of Allegheny County and the Garden Club of America, who fell in love with the property years ago while on a tour that included Choderwood. “There’s something secret and magical about it that is just special. I love reconnecting back to the river.”

The couple felt the same pull in 2001 when they bought the property, which includes one of a pair of twin brick Foursquare houses built by the U.S. Army Corps of Engineers in 1908 for the Lock and Dam No. 2’s day-shift and night-shift lock masters. 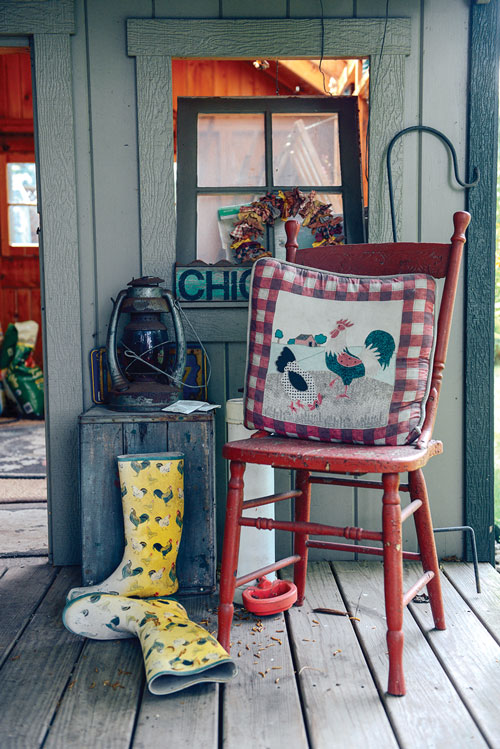 “This was the early 1900s, and to make sure the lock and dams were continuously operated, [the Army Corps] would build these twin houses, because in the early 1900s people were still running around in horse-drawn carriages and they needed people to be there 24/7,” says Jody, who has researched the history of the home.

At the time, Steve and Jody had no intention of moving from their home in Point Breeze, but after learning the property, by then a private residence, was for sale — and peering through the cracks of the fence surrounding the wooded land to view snoop further — they were hooked.

“We came in and Steve, Mr. Practical, started saying all the stuff I normally say, like, ‘Oh my God, this is the coolest thing. We’ve got to buy this,’” Jody recalls. “I was like, ‘Hey, those are my lines.’ The next thing I knew, we bought it.” 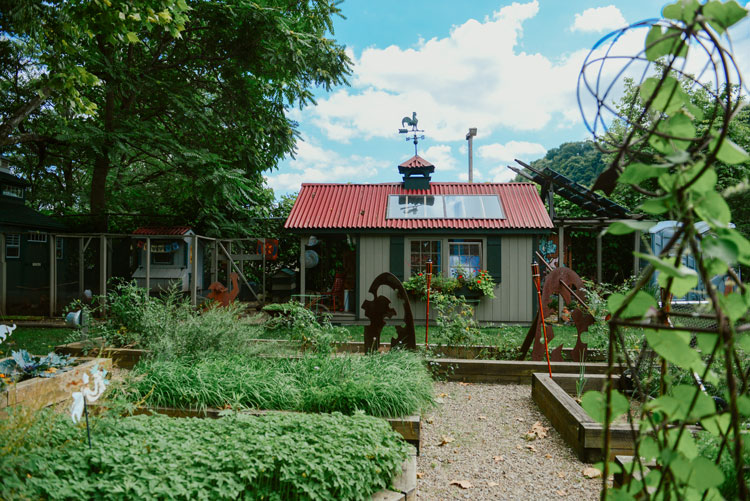 Once they moved in, Jody, who grew up in a rural area of Lower Burrell, and Steve, a self-avowed “city guy” from Squirrel Hill, immediately started enhancing the property with flowers, vegetable gardens, ponds and streams, creating a green oasis in an otherwise urban area.

To maximize the three-story home’s view of the river, the couple added floor-to-ceiling windows on the former front porch. While the property already had a large greenhouse containing a heated pool, the couple built a long pergola to the building that, in the spring and summer, is covered with climbing purple wisteria. It’s a charming walk that leads to the raised garden beds growing, among other things, sage, thyme, chives, tomatoes and zucchini.

The streams and ponds built by Steve — “Steve’s quite the pond master,” Jody says — are dotted with sculptures (including a mermaid bathing in a pond), quirky signs and pieces of artwork found at art shows, estate sales and antiquing jaunts. 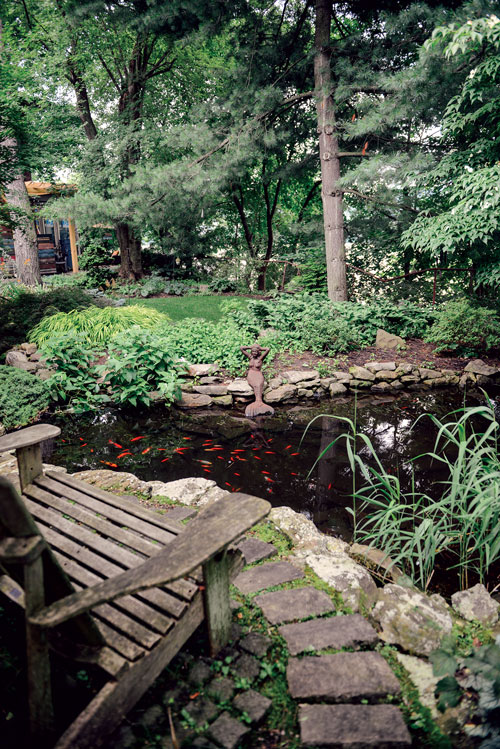 Azaleas, Lenten roses and pink and blue Hydrangeas surround one of the koi ponds, which is bordered by a patio made of bricks Steve collected over time from various demolition projects around the city, in particular from where all the redevelopment is happening in East Liberty. “If I see a rock on the side of the road, I might grab it,” Steve jokes.

Adding to the charm are Zoey and Cody, the couple’s friendly rescue dogs, 10 chickens (Jody calls chickens addicting and has a lavish coop for them) and four ducks — Jill, Elliott, Aflac and a nameless duck. At night, Jody uses a flashlight to guide the ducks into their own coop. The chickens, she says, are smart enough to put themselves to bed. 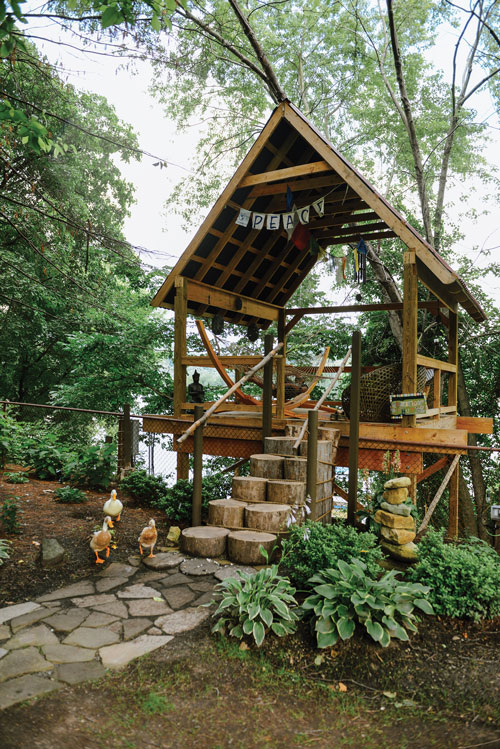 Situated high in the leafy trees and overlooking the river is a meditation hut, where couples often say their wedding vows. An Amish-built garden shed lighted by solar panels houses Jody’s tools, while a wooden riverwalk, erected with help from Steve, leads to the shore where a firepit and a pair of kayaks await.

People can’t help commenting on it.

“It’s interesting, you come in from a completely ugly industrial area, then you walk through the fence and it just changes immediately,” Steve says. “People ask, ‘Where am I?’”
Still, the couple had no plans to share the property they jokingly dubbed Choderwood — after Linwood, a camp Steve attended as a youth — with anyone other than friends and family.

But then life, and their career paths, threw them a curveball. Within months of each other in 2013, Steve and Jody lost their corporate jobs, or Jody likes to say, they were “corporate re-orged right out the door.”

Jody, now 61, had spent more than 20 years as a corporate lawyer. Steve, now 66, was the director of narcotic addiction at a facility. Neither of them was sure what they wanted to do next.

“We were still trying to figure out what we going to do when we grew up,” Jody says. 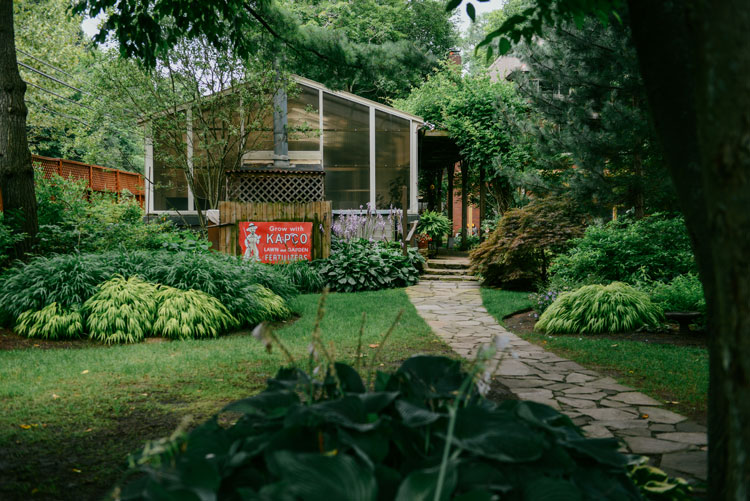 Then Nada Mercer, a cousin of Steve’s who owns Schnoodleberry Farm, a wedding and event venue in Butler County, suggested they open their home to the public — and Choderwood the business was born.

The couple began their next life phase by listing their property on Airbnb.  Unbeknownst to Jody, even before they were corporate re-orged, Steve had been looking into purchasing a houseboat. He had seen a houseboat used as a floating bed and breakfast in Florida and thought it was a great idea.

“We just said, you know what, why aren’t we doing this? This is ridiculous that Pittsburgh doesn’t have this,” Steve says. “We have the rivers here. Let’s do it.” 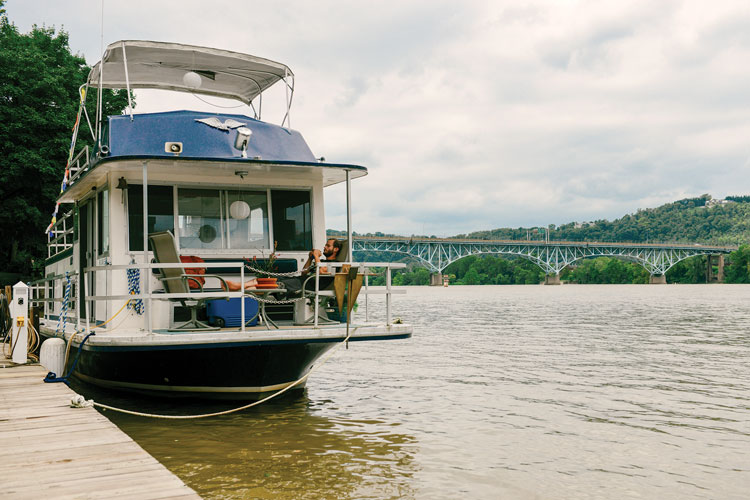 After an extensive search of Craig’sList, the couple became the owners of two houseboats — which they named the Namaste and the BoHo — in the winter of 2013-14. They also found a used set of docks on Neville Island that they installed on their property with the help of a consultant. The work took months.

​Choderwood began to receive its first guests. As far as the couple knew, they were the only houseboat bed and breakfast in Pittsburgh — and they loved it. Although they entertained people from across the world, including a United Nations colonel from Brussels, Jody says 95 percent of their houseboat guests were Pittsburghers looking for an escape or for some sort of connection to the river. 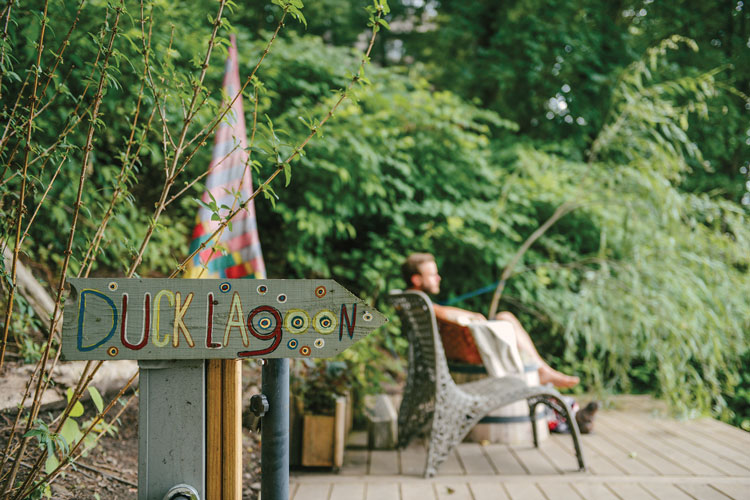 Their first guest was a writer from Highland Park who craved a space to clear to her mind. Another couple from Lawrenceville spent the day relaxing on the river for their 47th wedding anniversary. Then there was the husband and wife from the North Side who wanted a romantic overnight getaway that wasn’t too far away from their young son with special needs. When the wife left the next morning, she thanked Steve and Jody with tears of joy in her eyes, Jody says.

“It was just so nice to be able to give people that experience,” she says. “The weird thing about this property is, it’s so unique, with the history of the lockmaster’s house and the gardening, we feel like its caretakers. We really enjoy sharing it with people.”

The Airbnb venture was short-lived, however. Because Pittsburgh has no zoning category for short-term stays such as the one the couple was operating on their property, they were forced to close the houseboat portion of their business in 2015. 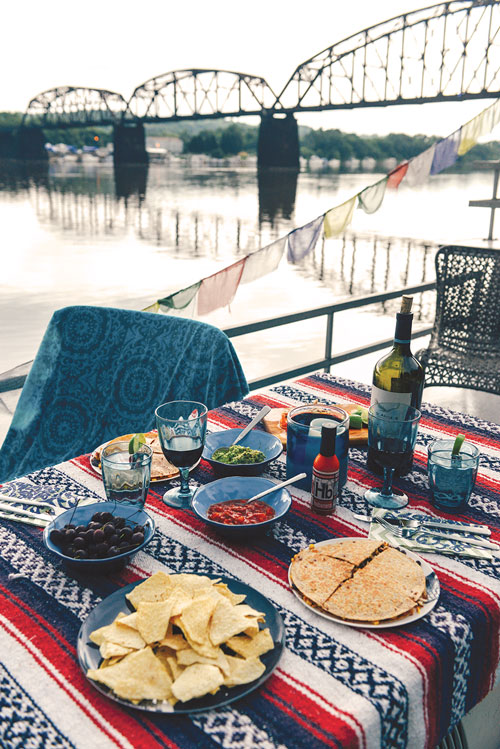 They are hopeful Pittsburgh’s new Riverfront Zoning — which, among other things, affects residential and commercial developments and encourages access to the rivers — that slowly is making its way through City Council will allow them to once again operate a houseboat bed and breakfast.

“The city is totally behind us,” Steve says. “We are fitting completely into their mission and vision of the city with access to the river. What could be bad?”

They also are making plans for the future. Steve in particular gets a gleam in his eye as he talks about his dream of opening a tiny house hotel, either on their current land or on a different riverfront property. Like the houseboat B&B, it would be a first for Pittsburgh, but the couple believes it will up Pittsburgh’s desirability as an edgy, must-visit city.

“It’s something brand new,” Steve says. “There’s no zoning for it, so again you have to break into the heads and minds of the city to say, OK, you’ve dealt with Uber, Lyft, food trucks, all these new components, let’s keep going. If you want to be a cool city like Seattle, we have to keep going. We can’t just stop — we’re on the cusp.”

This article appears in the June 2018 issue of Home & Garden.
Categories: From the Magazine, HOME + Design, Hot Reads