Inside a Pittsburgh Home That Takes You All Around the World

A service-oriented couple has transformed a home on the South Side into a dream abode showcasing their personalities — and their worldwide travels. 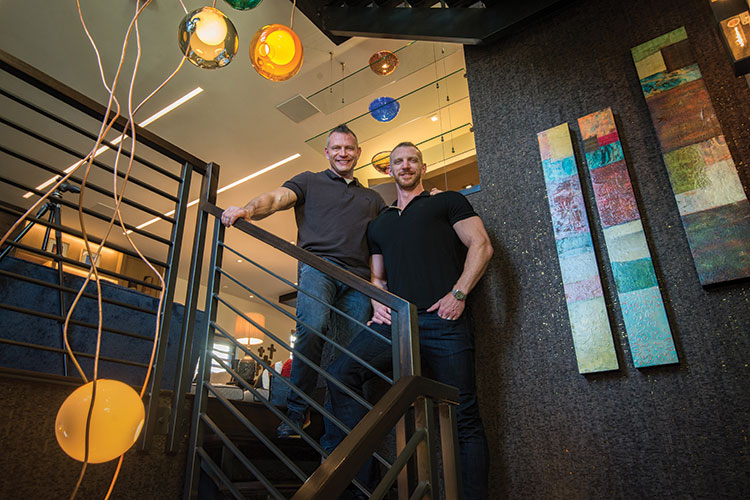 On their first date seven years ago, they compared which countries they had visited. Between the two of them, they’re now up to 63.

But no matter where they travel, they give back. 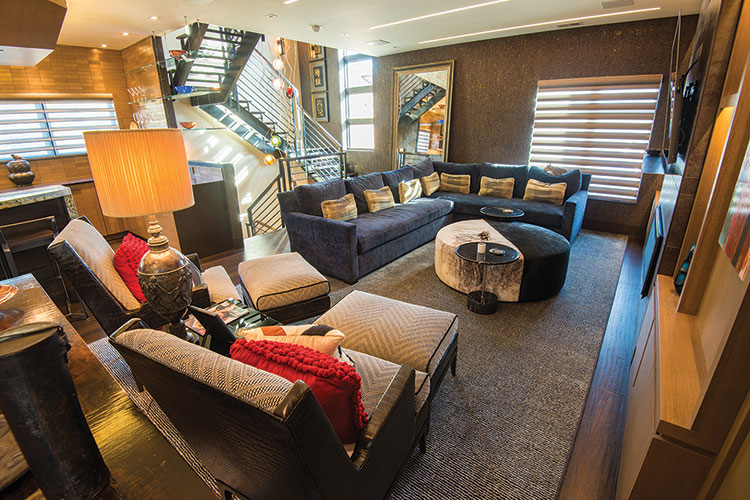 The home’s living room is comfortable and stylish.

“Tim has a joke — he says there’s no vacation I can’t ruin with an orphanage,” Gerber says.

When they went to Romania, they packed eight hockey bags with supplies for underprivileged kids. They sponsor an orphanage in Rwanda they visit about once a year. When they spent Christmas in Cancun, they asked the concierge where they could go to help kids in need. After the concierge pointed them to a nearby orphanage, they went to Walmart, filled two shopping carts with presents and supplies, and spent the rest of the day playing soccer with the kids.

“Who wants to sit at a resort on Christmas?” Gerber asks. 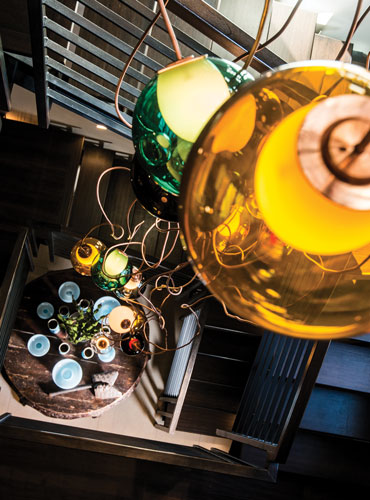 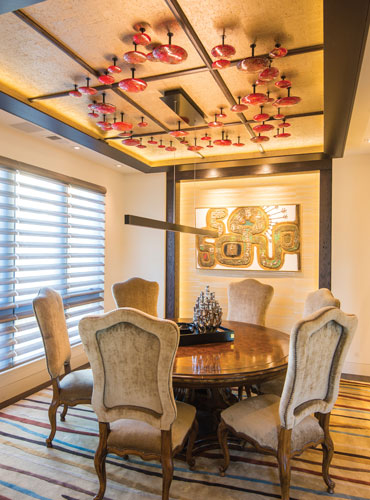 (left) A light fixture with 27 hand-blown glass pendants hangs from the ceiling through the center of the floating staircase down all four floors of the home. (right) Hand-blown glass discs create a sense of roses on the dining room ceiling so that the couple can dine “subrosa,” an idea that originated in Ancient Rome.

“Tim and I both grew up in super modest and humble settings,” he adds. “Tim was raised by a single mom; my dad worked three jobs to make ends meet. People think it’s something noteworthy to pack another bag to take stuff, but it’s because we’re not used to it.”

Their jet-setting ways are indicative of their home life. It’s luxurious, but everything about it is personal, from the leather floors in the walk-in closet to the specially designed light fixture that dangles through the floating staircase weaving through all four floors of their home. And it speaks volumes about them.

“[When I travel for work], I can’t wait to get back to Pittsburgh, back to Tim,” Gerber says. 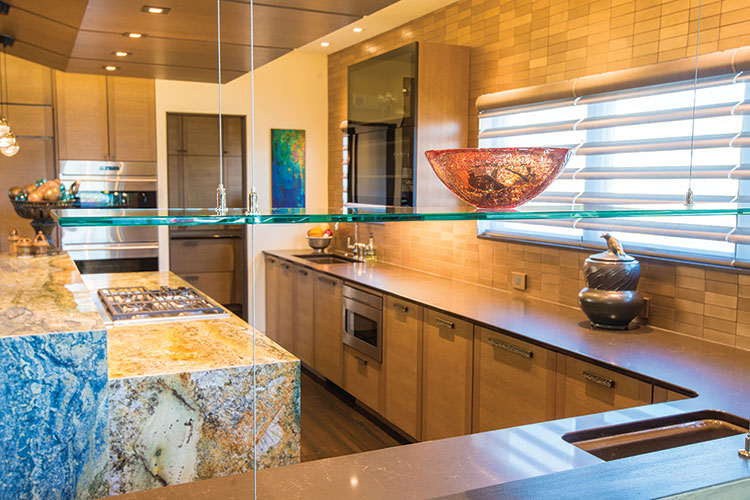 The streamlined kitchen with a blue granite island and white oak cabinets with cast bronze hardware.

When Gerber and Mantel moved to Pittsburgh for Mantel’s job in 2016, they planned to live in corporate housing for two months while they searched for a permanent place. They ended up in the 800-square-foot apartment for 14 months.

First, they had difficulty finding an ideal space; Pittsburgh’s large stock of older fixer-uppers was different from what they were used to coming from Minnesota. Then, once they decided to finish the South Side townhome under construction that was basically an empty shell, the detailed design and features they wanted to include took much longer than a generic build would.

One thing they say helped the process was hiring Vicci Franz of Vicci Franz Interior Design.

“The reason we got a designer, the reason we got Vicci, was we were told a designer could bring two different peoples’ tastes together,” Gerber says. “She drafted all the plans. She was the one that was the maestro.” 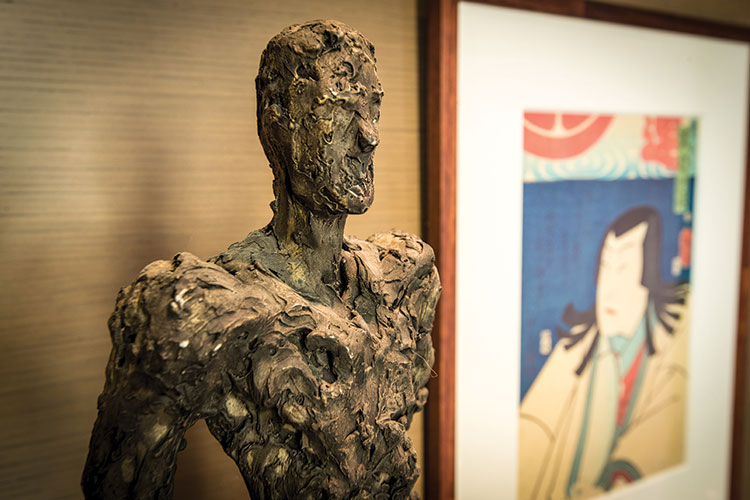 Franz melded earthy elements, which speak more to Gerber, and more streamlined, modern materials and design elements that evoke Mantel’s tastes. In the kitchen, for example, a blue granite countertop from Classic Rock Fabrication with striations of earthtones combined with mitred edges to make it look as though the island is carved from a single piece of stone complements the cast bronze hardware on the white oak cabinets by Pittsburgh Specialty Cabinet Co.

“I think it’s the tension between the design elements that makes it so pretty,” Franz says. “It’s very comfortable in there even though it’s refined.

“It’s a nice mix of contemporary style with rustic accents, which is on point now, and some darker tones,” she says of the overall design. “A lot of people do a lot of white, which I love myself, but this was a nice deviation from that with a lot of bronze tones, which was exciting. It’s a little different.” 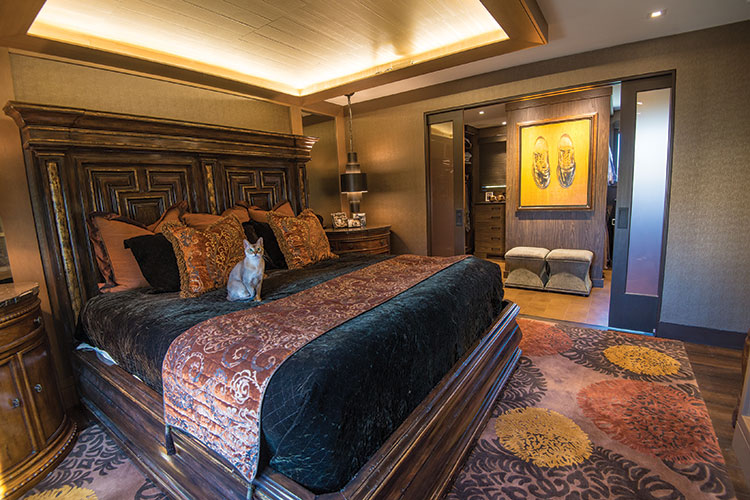 Knowing how badly they wanted the design to help them feel at home, Franz worked hard to provide a sense of place, especially in the open-concept second floor containing the living room, kitchen and dining room.

On the ceiling over the kitchen, custom fabricated wood elements, indirect lighting and decorative pendants come together to create a cloud design. The dining room’s area rug and a coffered ceiling above a round table, as well as two special features, draw the eye to that section of the space.

A dramatic piece of art adorns the recessed niche behind the table accented by a rustic wood arch and hand-painted and hand-stitched wallpaper.

“When you’re designing, most rooms are boxes, so to create an accent area, I did it with the arch and the lighting and this beautiful paper,” Franz says. “It’s a wonderful opportunity to showcase the artwork they had.”

Above the dining room table is a special request from Gerber that Franz brought to life. Hand-blown glass discs with standoffs behind them, extending them to different lengths and making them appear three-dimensional, evoke a plethora of roses. The light fixture in the room has up lighting and down lighting, illuminating the design.

“There’s a phrase in Latin, subrosa,” Gerber says. “In Ancient Rome, dining rooms were adorned with roses on the ceiling, and because the dining room was where they made their grand plans; anything that said subrosa was very private. I told that story to Vicci and she imagined the design.” 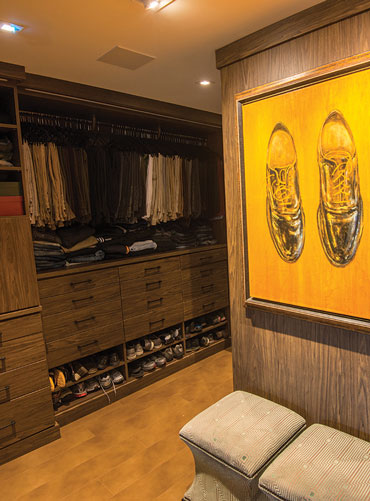 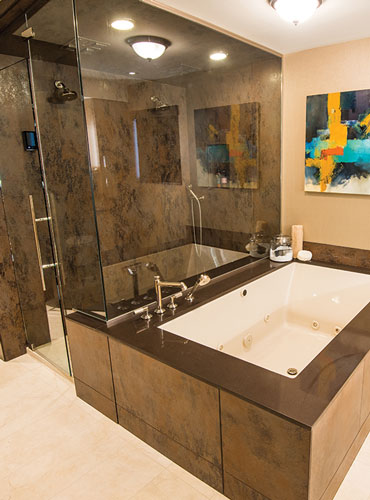 In addition to being beautiful, the whole space is incredibly streamlined.

“Because it’s a small footprint, every inch counts,” says Franz. The home is 3,200 square feet spread over four floors, plus three outdoor spaces.

For example, the bathrooms contain wall-mounted toilets with recessed tanks.

The guest room/family room downstairs has a large, wall-mounted television as well as a mini fridge.

“It’s convenient,” Franz says. “I think that’s the biggest thing when you have multiple levels. Do you want to go up two flights of stairs to go to the bathroom or get a drink?”

In the kitchen, double ovens, a wine cooler and a beverage cooler from Don’s Appliances are built into the custom cabinetry and concealed behind wood panels. Electrical outlets can be found in hidden receptacles that easily pop out of the wall when necessary. 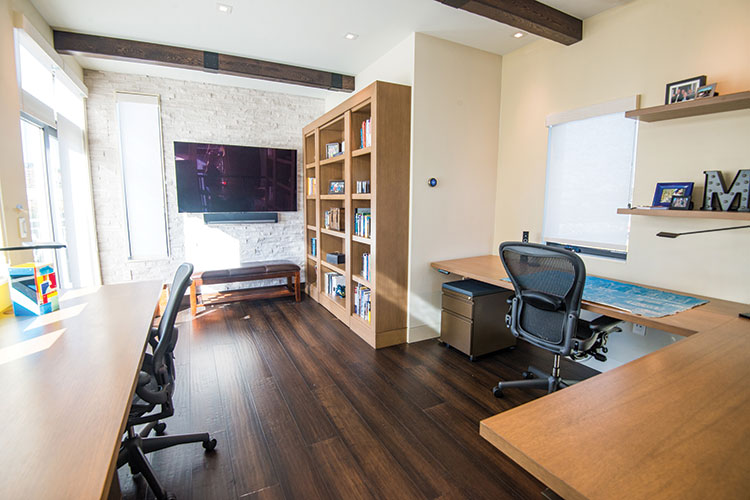 Gerber’s office contains a bookshelf with a hidden section that opens to a half bath.

In the master bedroom, the space contains room for a king bed and a his-and-his divided walk-in custom closet by Closets by Tom with a leather floor, which is warmer to the touch than tile, and a conveniently located washer and dryer behind a mirrored door.

In the en-suite master bath, a glass double shower, with slab-sized tile from floor to ceiling and a remote-controlled rain showerhead, as well as a normal showerhead and hand spray, fits comfortably next to a soaker jetted tub. A piece of art in the hallway, visible from the soaker tub, is from Borelli-Edwards Galleries in Lawrenceville, which supplied artwork throughout the home. Once again mixing beauty and function, the bathroom contains frosted bronze beveled glass tile that reflects the light, large format metallic tile and an edge-lit mirror with a nightlight feature that stretches over the double sinks.

A floating staircase connects all four floors, and in the center hangs another piece of dramatic art: an organic copper light fixture with 27 hand-blown glass pendants; the entire piece stretches from the ceiling down to the home’s ground floor.

“Tim kept saying, ‘I want something dramatic,’” Franz says. She showed him a picture of an installation in Europe, and he fell in love with it. They designed a unique fixture that would extend 30 feet with asymmetrical organic stems and glass shades comprised of a decorative colored shade and an internal frosted shade, which help to diffuse the light’s LED lamps. 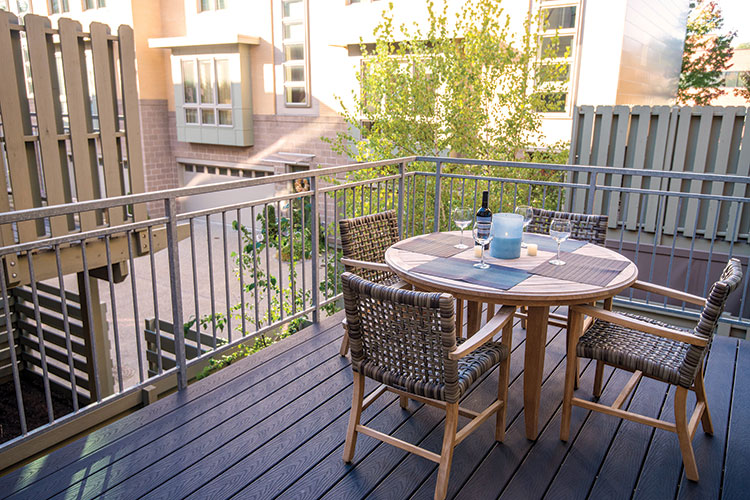 The home has three outdoor areas that expand the living space.

In the living room, Franz arranged a mix of new furniture, a custom ottoman with hair on the hide, and club chairs with a black-and-white chevron pattern and alligator-embossed leather as a nod to the couple’s travels and artwork from Africa.

“I don’t see it as just one style, that’s what I love about this house — it’s just them,” Franz says.

Along those lines, the couple’s favorite items in their new abode aren’t priceless artifacts: one is an oil portrait a friend painted of them standing on the border of Rwanda and Tanzania and the other is a Buddha sculpture that originated in the 1500s in Burma that Mantel discovered at an antique area in Bangkok.

“I think what actually made [the home’s design] work was it wasn’t about taste or stuff,” Mantel says. “We need to be able to bring people into the space and entertain and live.”

For their recent two-year wedding anniversary, they hosted a combination house-warming/anniversary party for their family and friends, many from out of state.
“We’d talk on the phone and say bridges and hills, and they had no idea of the crazy geography,” Gerber says.

But, as it seems everyone does, the couple has a Pittsburgh connection.

“Matt’s great-great-grandfather homesteaded here, before leaving for Oregon on the Oregon Trail,” Franz says. His great-great-aunt is buried at St. Paul Lutheran Church in Allison Park. 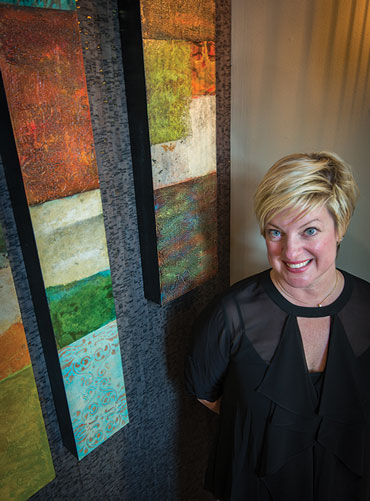 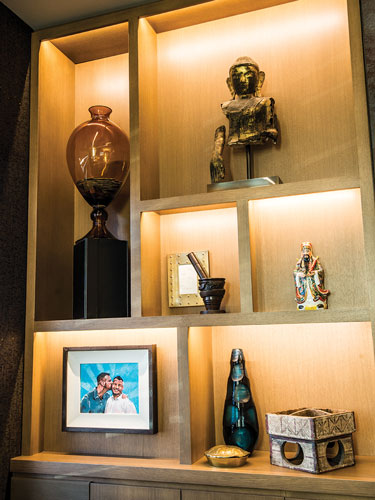 In addition to comfort and style, privacy is important. Gerber is the executive director for FitOps Foundation, which helps veterans struggling with the transition back to civilian life become personal trainers, and he runs the nonprofit out of their home; the couple added the home’s fourth floor to serve as his office space. A frosted pocket door (again saving space) separates their bedroom from co-workers or guests passing through the house. A section of the office bookcase, with custom cabinetry by Pittsburgh Specialty Cabinet Co., opens to a hidden half bath.

Because the couple travels frequently, their home is outfitted so that they can keep an eye on things from anywhere. Hunter Douglas window treatments, lighting, security and temperature can be controlled through a HiTechnology system through an app on their phones.

“Whether we’re coming or going, we get in and out fast,” Mantel says. “I think the living situation has made us really efficient, and it has allowed us to spend time working or traveling or spending time with family or friends.

“We’re excited to be in this space because we’re always looking for items to bring back to our home.”

This article appears in the January 2018 issue of Pittsburgh Magazine.
Categories: From the Magazine, HOME + Design, Hot Reads