Influx of Red, White and Blue Coming to City of Black and Gold

The National Flag Foundation is bringing the Star Spangled Banner’s history and colors to the Koppers Building –– and on some nights, it will be visible for miles. 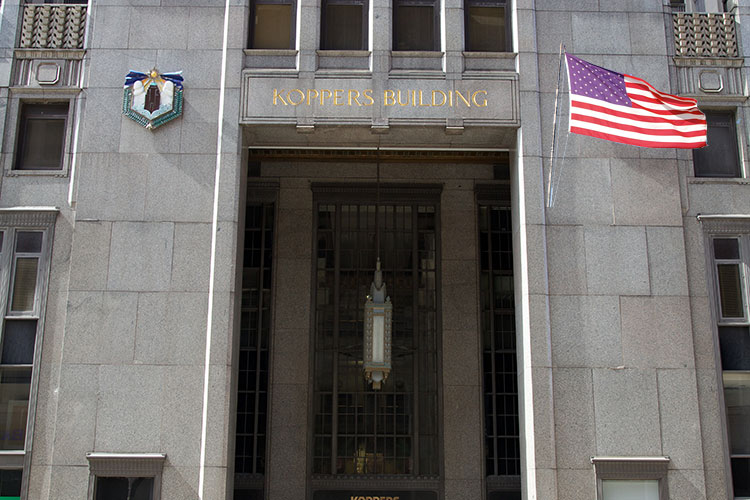 The National Flag Foundation (NFF) is moving its headquarters and opening its American Flag Education Center in the first floor of the Koppers Building Downtown.

The most visible aspect of the new center will be a lighting system that will brighten the Pittsburgh skyline with the colors of the American flag. As part of a rental agreement with Rugby Realty CO., which owns the Koppers Building, the building's usual green roof-top light display will be colored red, white and blue on anniversaries of significant historic events and national celebrations. The light installation is scheduled to be completed this August.

“It reminds people to fly the flag on patriotic holidays,” says NFF Executive Director Brian Goerke. “It’s also a reminder that we have a free exhibition on the first floor of the Koppers Building.”

The Thomas Marshall Foundation, created by the former head of the National Flag Foundation, donated $250,000 help create the new center. The venue will free and open to the public in the first half of 2019.

The 1,1000-square-foot space will feature several permanent exhibits and a rotating collection of more than 700 pieces of flag memorabilia.  Certain displays will be digital and interactive, including a “flag stories” exhibit featuring first-person accounts from veterans, celebrities and citizens about what the flag means to them. There also will be a showcase of flags from around the world and an area designated to flag etiquette and care.

“This organization has a historic past including a connection to many U.S. presidents, involvement at the Federal level regarding the Flag Code as well as a relationship with over 7,000 U.S. schools to help foster knowledge, good citizenship and patriotism among our young people,” Romel Nickolas, chairman of the National Flag Foundation, says.“It is these relationships and character-shaping values that are the tenants of our organization, built upon respect for our flag, our country and the values that unite us as one.”