A recent post of mine over at That’s Church, this one about inevitable financial ruin of the Port Authority of Allegheny County, has created quite a bit of comment dialogue, Twitter feedback, and even emails to me personally about the situation. 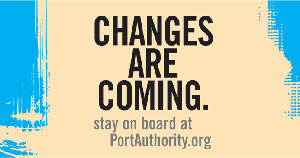 Having read all of those comments and feedback and emails, I can say one thing for certain — no one has any idea what the heck is really going on and how it can possibly be fixed.

I have had emails and tweets that say essentially, "The union wanted to make certain cutbacks, but the management rejected them."

I have had emails that said, "The management wanted to make certain cuts, but the union rejected them."

There are those that blame the State government for not ponying up more money.

There are those that blame the County government for not ponying up the drink tax money.

There are those that look at the $530 million connector (which was originally supposed to cost $350 million) being built under the river and throw up in their mouths a little.

There are those, like me, that wonder if the Port Authority ever counted the change that was sitting around in those barrels in some warehouse somewhere or other. I mean, has PAT ever heard of CoinStar?! One barrel at a time, go get your money, PAT.

I’ve had comments applauding my opinion, which is that ULTIMATE blame must lie with the management, and I’ve had name-calling comments and comments claiming I’m using my audience irresponsibly when it comes to political matters.

Regardless, so many fingers pointing all over the darn place, we’ve started using our toes.

Maybe there is actually a LOT of blame to spread around? Maybe the unions need to realize that they’re aggressively negotiating their way out of having jobs? Maybe the bus drivers need to realize that they are bus drivers? Not that there’s anything wrong with that. I mean, my child has claimed on many an occasion that he might like to be a bus driver when he grows up, but I hope he doesn’t expect to earn six figures as a bus driver, as some of our Port Authority drivers are incredibly doing. Call me crazy, but I don’t think a bus driver should be earning more than the Mayor, whose job is much more difficult and much more important.

Part of running a business, any business, is managing your payroll costs. My husband is regularly obsessing over his payroll, managing overtime, ensuring his percentages are allowing him to remain afloat. It would appear that the Port Authority has done a miserable job of managing overtime pay and/or absenteeism. I have a hunch it’s hard to fire a union employee for absenteeism. Is that the union’s fault for asking for such rules or the management’s fault for agreeing to them? Did the chicken come first or the egg?

Then you add legacy costs into the equation and you’re sinking so fast the fishies are all, "Look at it go!"

End result? A flailing, failing, sinking public transportation system that will soon be unaffordable for the average rider to use.

There are many transportation systems in the country encountering similar problems; but there must be some that are getting it right. Can we learn from them?

I hope for the sake of Pittsburgh, that the unions, the management, and the government all take some blame from the big blame pot and rest it on their own shoulders, realizing that it is in everyone’s best interest to fix this problem and fast, because when it comes to the point where public transportation is no longer affordable, something’s gotta give.

And something’s gotta give soon, or Burghers will all be riding elephants to work. Sure they’re cheap, but they’re slow as honey and I hear they’ve got a stink of an exhaust system.

This article appears in the June 2010 issue of PittGirl.
Categories: PittGirl