In the Frame: Julie Sokolow Sees the Future

After making films focused on Pittsburgh, Sokolow is rising through the ranks of U.S. women documentarians. 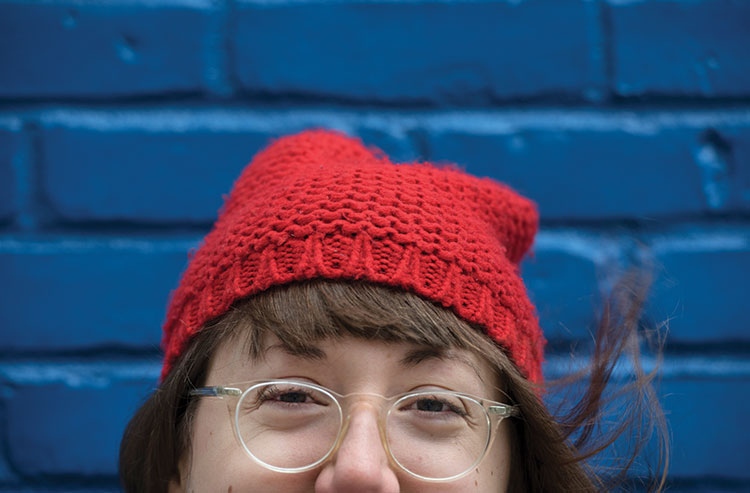 On one of the darkest dawns of late November, Julie Sokolow locks her Bloomfield apartment, shoulders a worn nylon backpack and heads towards the University of Pittsburgh Cathedral of Learning for a speaking gig at the University Honors College. With her dark bangs sweeping huge round eyeglasses, she blends easily with the graduate students converging on Oakland. 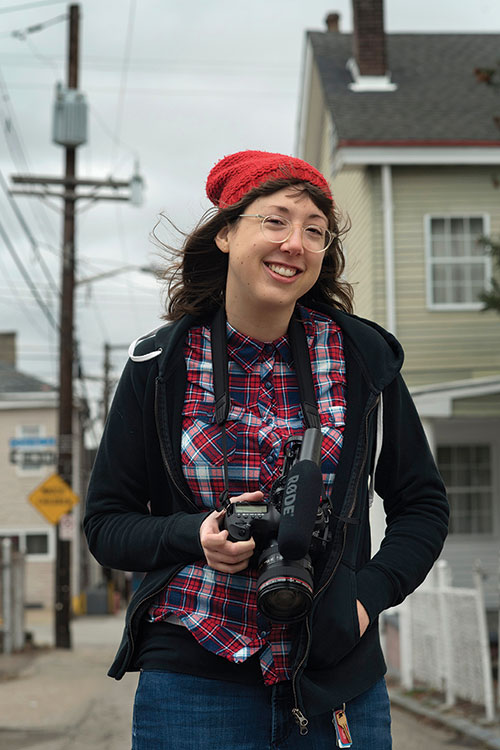 But Sokolow, 29, is heading in a different professional direction. The documentary filmmaker and her backpack have just returned from a whirlwind week in Manhattan, meeting execs from Amazon Studios, the Sundance Institute and other top producers. After seven years of work and numerous movies and videos made in Pittsburgh, Sokolow is building a national reputation as a filmmaker with a heart and a conscience.

Sokolow’s most recent film, “Woman on Fire,” was selected for screening at the 2016 DOC NYC, a top showcase for documentary films. Her profile of Brooke Guinan, an outspoken transgender New York City firefighter, was signature Sokolow: an honest look at a character with a unique personal story. 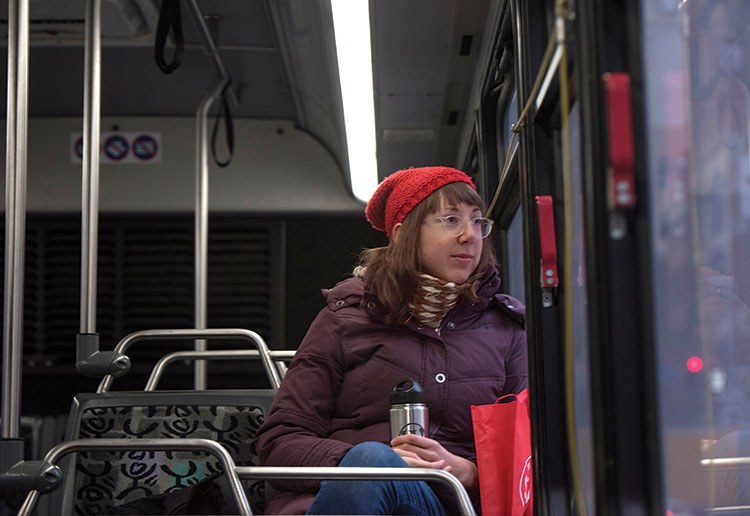 Locally, Sokolow has covered this ground before. Her previous full-length documentary, “Aspie Seeks Love,” (2015) shadowed Pittsburgher David Matthews as he struggled to connect with women due to issues related to a diagnosis of Asperger’s Syndrome. “Healthy Artists,” her short profiles of local uninsured or underinsured artists surviving without health care, gained the attention of the New York Times. And “Street Doctor,” which followed Dr. Jim Withers as he cared for the city’s homeless, went viral, attracting a million views on social media. San Jose’s Cinequest Film Festival chose her documentary on Pittsburgher John Riegert to screen this month; Pittsburgh’s film community will honor Sokolow in April, with Steeltown Entertainment’s Indie Award.

Some documentaries are contrarians, exposing criminality with the camera. Sokolow chooses to go deep and one-on-one. Speaking with Pitt undergraduates on that November morning, Sokolow offered a simple artistic statement. 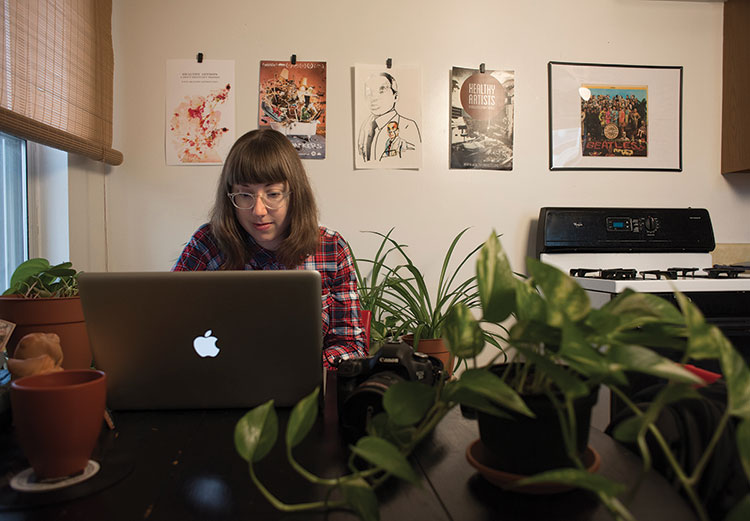 “I only make films of folks I admire,” she explains. “My first question is, ‘How did you get to be so cool?’” Her straightforward curiosity and a near-constant smile draw Sokolow into a relationship with her subjects. When she hears one Pitt student mention his drone, she makes an immediate connection. “I need to know how to use that!” she tells him.

“She has a way of making of you feel comfortable. That’s a talent,” observes firefighter Guinan, who allowed Sokolow to film her during the course of a year for “Woman on Fire.”

“She connects with people in a way to bring down their walls. Her job as a filmmaker is to push, to tell the story. There were things [in her film] I wasn’t super comfortable with, but she was getting the true truth.” 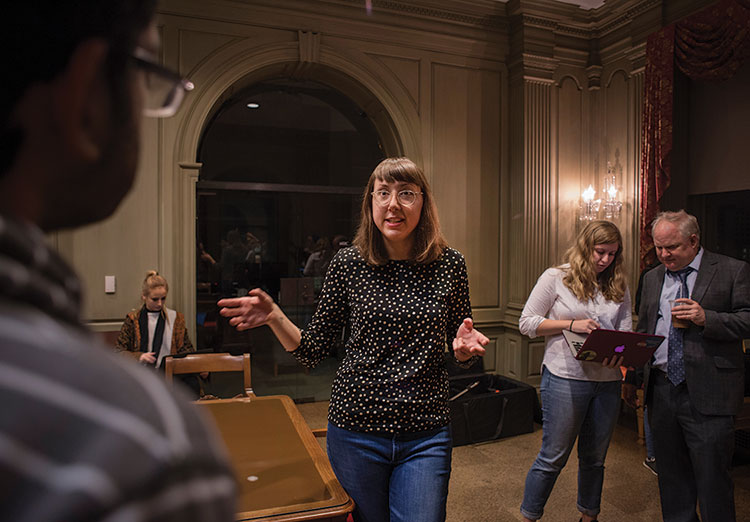 “Am I drawn to portray outsiders?” Sokolow considers the question. Growing up in Holmdel, N.J., “I was a punky teenager, a benchwarmer. I got to see things from an outsider perspective. I felt excluded, but also empowered. That was a unique vantage point. When I see people with even more of that perspective, either by choice or forced on them by a prejudiced society, I feel admiration. They’re being true to themselves.”

Sokolow earned degrees in psychology, creative writing and philosophy as well as a certificate in film studies from the Pitt University Honors College in 2010. A fan of dark suburban comedies, Sokolow says she likes Netflix’s “Lady Dynamite” and the work of writer-filmmaker Miranda July. Nationally, she says, “There’s no lack of examples” of successful women filmmakers. In Pittsburgh, her home since receiving a Pitt scholarship, she’s had fewer female colleagues and a longer and lonelier road. 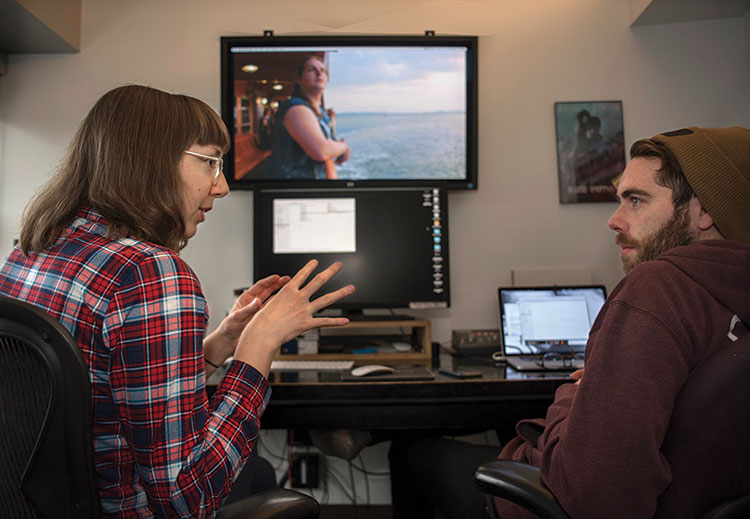 Danny Yourd of Animal Media Group, a Pittsburgh-based production company, has worked with Sokolow since 2014, when she asked him to review footage for “Aspie Seeks Love.” Animal already was a rising player in the documentary community, having produced “Blood Brother,” Pittsburgher Steve Hoover’s much-honored film about AIDS orphans in India; It received Sundance Film Festival’s top awards in 2013. Helping Sokolow to refine “Aspie” convinced Yourd that she had the grit to succeed.

“Making a documentary takes at least a year — maybe 10,” he says. “I see that passion in her. She’s smart. She’s not afraid to get criticized — but she can overrule others and tell the story her way. She finds a way to be super-intimate with the subject. That takes a lot of talent.”

And patience. Sokolow spent four years on “Aspie,” filming, producing and later editing at a desk in her bedroom. By contrast, “Woman on Fire” moved more quickly. In late 2014, she read Brooke Guinan’s story — a third-generation firefighter transitioning to a woman, whose father survived the 9/11 tragedy. She emailed Guinan in New York, asking for a conversation.

“On the phone she was so relatable and wonderful,” says Guinan. “We’re the same age and have the same views on a lot of things — we’re liberal, radical sort of people. She wasn’t interested in telling a preconceived story. So we got together for a couple of days. She met my father and a few others. Then she sent me a three-minute trailer to show what the film would look like. Everything about it was amazing. It sounded authentic to me. So we both decided to commit to the thing.”

Sokolow tunneled in. “I’d get on Amtrak with all my equipment and go up to New York. I stayed at Brooke’s. It took over my life, for better or worse.” The trips were Sokolow’s introduction to the dirty, dangerous work of firefighting, the male-dominated firehouse culture and the Guinan family. “It was exciting. I felt myself evolving,” she recalls. Exactly two years later, the film debuted at DOC NYC, with Guinan’s husband and parents in attendance. 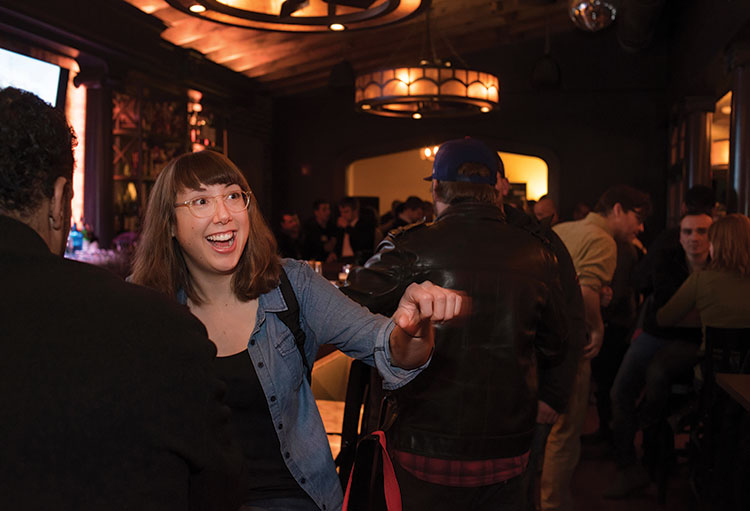 “It was the culmination of two years of endless work,” Sokolow says with a laugh. With the backing of Yourd, who produced the project, and Animal, which financed it, the completed film was one of more than 1,600 submissions selected for DOC NYC. Reviews were positive; the Village Voice called the film “just what a great social awareness doc should be — equal parts heartwarming and infuriating.”

More important, the festival landed Sokolow a group audience with major film producers in professional speed-dating sessions that she likens to “a little tap dance.” She awaits final word on a distribution deal for the film shortly.

What’s next? For her next project, Sokolow is considering a turn towards narrative; she says she’s in early stages of development on a screenplay for a fiction feature she plans to direct.

“I’m eager to have a moment to catch my breath,” she says. “I’ve been making lots of films in the past five or six years. In the documentary process, you have to become an extrovert, and strangers become friends. Then you go into your cubicle and bang your head against the wall. You find out what story you have to tell based on what film you capture. So, writing a script, then going out to film the story, reverses that process.” 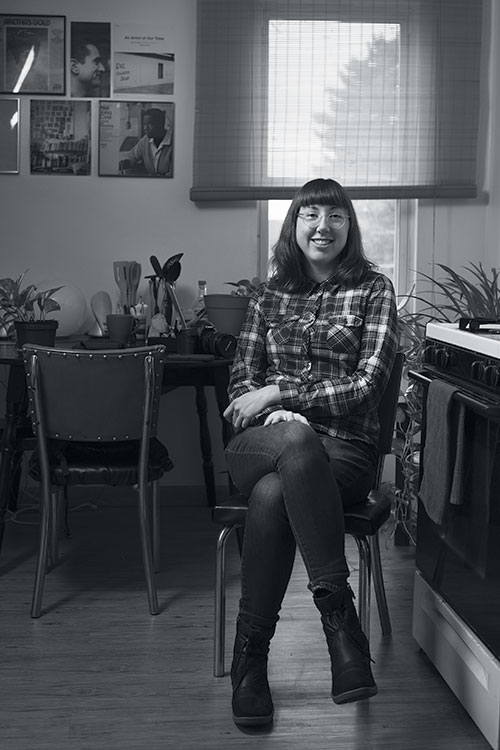 Though Pittsburgh’s filmmaking cohort is small, Sokolow says it feels like home. The lifestyle is not glamorous. “I live minimally to have creative issues prioritized,” she explains. “I can’t even think about having a cat!” Still, she says she would like to have the ability to stay in town and secure local funding for her next film. Her work and accomplishments here prompted judges to include her among the 2013 40 Under 40 awardees honored by Pittsburgh Magazine and PUMP. “Opportunities tend to present themselves here. It’s where I found my voice, a group identity, a community.”

One of those opportunities may be the release of a new music album. Sokolow says she’s got a body of new songs ready to go; her first solo effort, Something About Violins, was picked up by prestigious indie label Western Vinyl in 2006. For now, though, she says, “I want to make space in my life for the unknown.”

Christine H. O’Toole is a frequent PM contributor as well as an active travel writer who writes about Pittsburgh, the region and the world.

This article appears in the March 2017 issue of Pittsburgh Magazine.
Categories: Arts & Entertainment, From the Magazine, Hot Reads