In ‘Rehabilitation of the Hill,’ Filmmaking is a Community Project

Filmmaker Demetrius Wren, the University of Pittsburgh and the Steeltown Entertainment Project have teamed up to give students and Hill District residents an opportunity to break into the business. 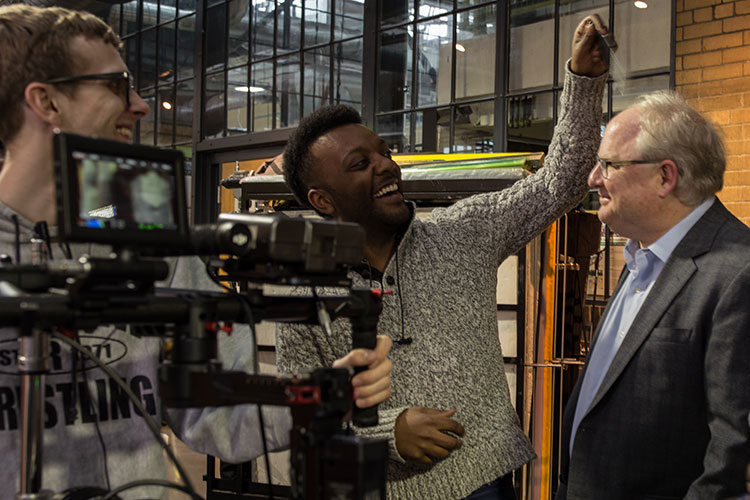 Pittsburgh has a history as a hotspot for film, from “Night of the Living Dead” in 1968 to “Fences” in 2016, and Pittsburghers delight when famed actors and actresses explore the Steel City while filming in the area. But for those who want to work behind the scenes, big films are often beyond their reach. Instead, filmmakers bring their own crews to Pittsburgh, depriving locals of the chance to work on a professional set.

The oft-cited reason — not only in the case of Pittsburgh, but for any film crew venturing outside of Hollywood — is a lack of experience among local workers. But as anyone who’s gone job-hunting is well aware, needing experience to get experience is a vicious cycle. Demetrius Wren and the Steeltown Entertainment Project are working to grant local students that much-needed experience, offering aspiring filmmakers and community members a chance to work on their latest project, “Rehabilitation of the Hill.”

The project began a few years ago, when Wren, an indie writer and director, met with actor and filmmaker Harry Lennix, who has long had a penchant for stories about people returning to change their former communities. Lennix was curious to see what would happen if a person succeeded in such an endeavor — but still wasn’t happy. 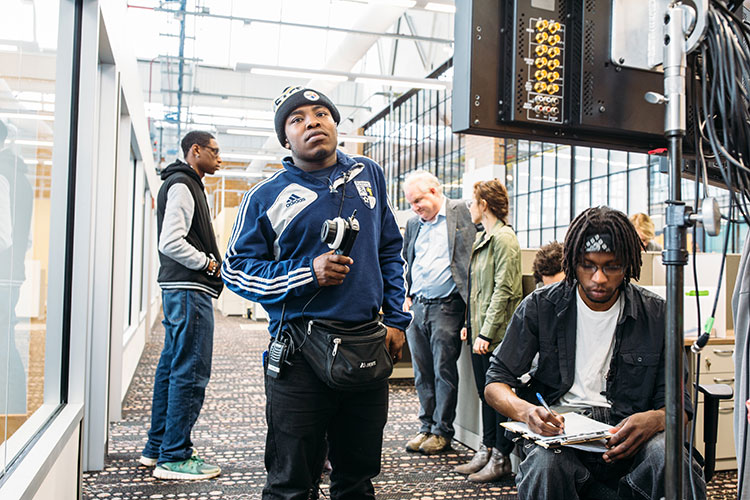 Wren wrote the screenplay and wanted to set it in Pittsburgh because of family ties to the area. His father-in-law worked in the Hill District. Wren’s wife, Christina, is an actress and producer raised in Pittsburgh; she has appeared in the films “Man of Steel” and “Batman v Superman: Dawn of Justice,” among others.

“I would go to his office and see the Hill District, and I was a huge fan of Billy Strayhorn and folks from the Hill District,” Wren says. “But I felt, I’m not from Pittsburgh, so I need to partner with an organization that can introduce me to people.” 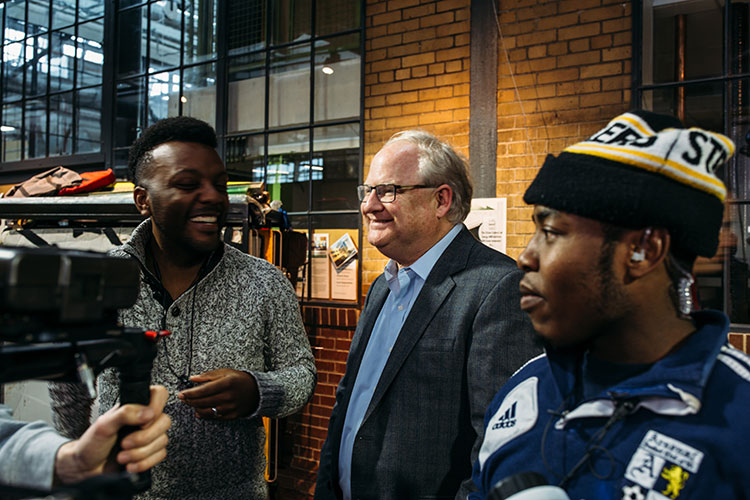 Enter Steeltown Entertainment Industry, a nonprofit organization dedicated to fostering the regional entertainment sector. It supports and develops talent through training and learning experiences and connects with industry professionals to help bring projects to the area. They awarded Wren the Steeltown Indie Grant. Then, when Wren sat down with Steeltown president Carl Kurlander, they decided to combine their visions to make Wren’s project a teaching film.

Kurlander is also a visiting distinguished senior lecturer and faculty advisor at Pitt; he brought the idea to the university as part of its “Year of Diversity” programming. Pitt hired Wren to teach a four-hour Friday class that splits its time between learning about film and working on an actual film set.

After filming began on March 16, his students spent part of their Fridays on set, shadowing different positions to get a better understanding of what various roles do and how they work together.

“It’s a lot more hands on,” Pitt sophomore Quinn Huang says. “A lot of Demetrius’ class is so focused on connecting what you watch [with] how to actually bring it to life. It’s much more practical — but not technical.”

Demetrius also wanted to involve the community, so he reached out to Hill House, a community outreach program, to create a series of five workshops about filmmaking. Sixty people showed up to the first workshop. Those who attended two or more workshops were permitted to work on set as second- or third-tier positions, assisting and shadowing keys (positions filled by local professionals). 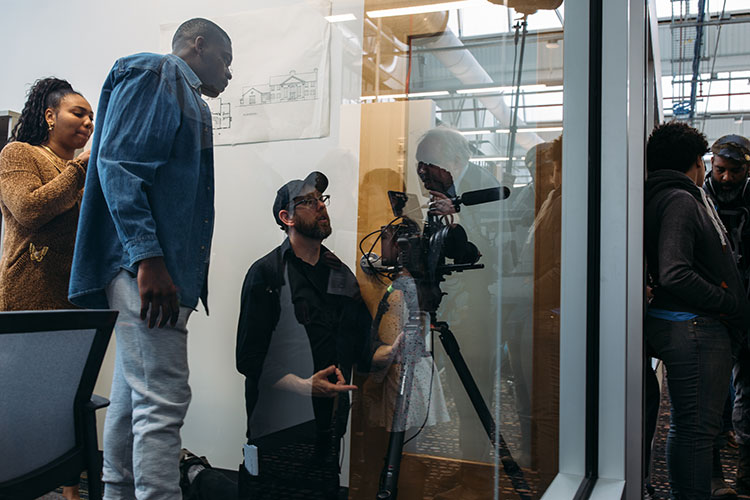 “I had interest after high school, but I didn’t know where to go or what to do,” Point Park graduate Mercedes Williams says. “It’s been on my mind — like, I need to get in this kind of arena. I want to learn a bit more and see what I can bring to fruition from this experience.”

Williams works in the Hill District and got an email from Hill House about the opportunity. She’s been rotating through roles each week; she’s spent time in the art department dressing the stage, shadowing the assistant director and working on the camera team. However, roles tend to be fluid based on need.

“I just hope that once this film is over there will be more opportunities to continue learning,” Williams says.

While Wren’s class at Pitt is primarily comprised of filmmakers who already have a focus, workshop attendees come from a wide range of backgrounds, from high school students to retirees. Many, like Williams, were just looking for an opportunity, which is difficult to find but necessary to get a foot in the door of the entertainment industry.

To benefit them more directly, Wren geared the workshops towards giving them an overview of the positions on set beyond more well-known roles.

“Very few people know about what the boom operator does or how to be an assistant camera person — to work your way up to be a cinematographer,” Wren says. “These entry positions are quite needed and might be their way to get onto a big movie set when it comes here.”

Members of Steeltown are also involved, from the “Reel Teens” — part of Steeltown’s Youth & Media Program — to independent students looking for a way to learn more. Victor Gariseb, a high school senior who moved to the Hill District from Namibia, became interested in film after making a short with friends after class. His teacher pointed him to Steeltown; after weeks of working with them, he met with Wren and Kurlander. Now, he’s working on their set. 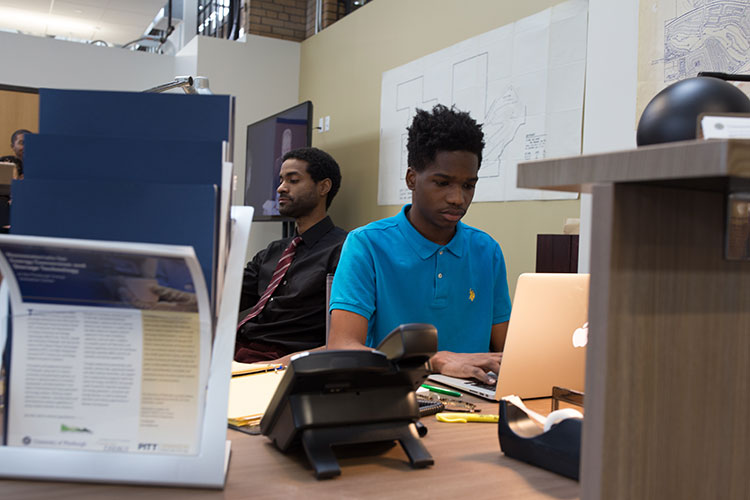 The efforts to help the Pittsburgh film community reflect the plot of the movie, which echos Lennix’s initial idea. The narrative follows Kelly (Christina Wren), a young woman who lives in the Hill District. She likes her community the way it is and clashes with Gwen (Kelsey Packard), who returns home for her grandmother’s 85th birthday with money, power and the desire to change the Hill District for the better.

In reality, Wren’s project with Pitt and Steeltown has not met with any such clashes, sticking instead to effecting positive change. It’s opened up the opportunities that Wren had hoped to create and he’s met with enthusiasm and generosity from the community — which has come together in a crowdfunding campaign to raise $15,000 of the film's $100,000 budget.

Wren and Steeltown aren’t taking any salary from the movie. Whatever profits are made will be put towards future projects, further investing in local talent and industry. Everyone on set — with the exception of Lennix — has connections to Pittsburgh, and they’re learning faster than Wren expected. They’re also connecting and mixing with people they wouldn’t have otherwise known, fostering a community of people that fulfills Wren’s conception of film as the people’s art.

“It’s not about how much money was spent on it, how huge the actors are. It’s a story being told,” Gariseb says. “We’re bringing out the beauty of the Hill District.”