In honor of an old-fashioned doctor

Just last week, as our Top Doctors issue was wrapping up, I read that my childhood physician, Dr. Robert Potter, had died. I was scanning the obituaries over my morning coffee when I saw his photo. Despite his silver hair, I immediately recognized his kind eyes and smile. He died of complications from pneumonia at his winter home in Florida. He was 80.

I grew up in the ‘60s—when doctors still made house calls—and Dr. Potter made thousands over the years. When I was four, I had scarlet fever, and Dr. Potter came to our house, carrying his old-fashioned black leather medical bag. He also stopped by when my brother and I had measles and mumps. Dr. Potter was a hero to our family. He came to the rescue—even late at night—to provide the best medical care and peace of mind to my worried parents. He made it a point to get to know his patients—a true family physician who at times cared for three generations of the same family.

Dr. Potter’s expertise in medicine extended beyond his West View office. He also was the school physician for the North Hills School District and was an early practitioner in sports medicine before it became a specialty. As team physician, he began walking the sidelines at North Hills’ football games in 1958 and continued with the team for 27 years. He cared for a series of North Hills football stars who went on to pro careers, 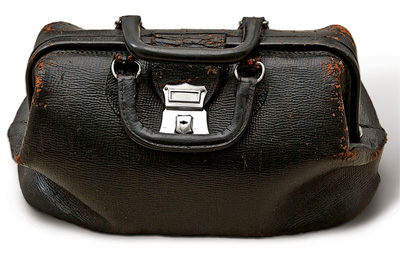 including Bills safety Mark Kelso, and the Steelers’ Thom Dornbrook, Steve Fedell and Bob Soleau. In 1999, he was inducted into the school’s Hall of Fame.

To me, Dr. Potter was a “top doctor” of his day—before the concept of physician lists, rankings and surveys became commonplace. Pittsburgh magazine is proud to salute the “top doctors” of today, and we are proud to be part of a city that is home to world-class medicine and pioneering research.

Still, many of the doctors in this issue have gone beyond our expectations: A few months ago, a team of 13 physicians and medical personnel from Allegheny General Hospital made a “house call” to Haiti. Drs. Richard Ray, Mark Sangimino, Eric Johnson and Mike Beckett, to name a few, risked their own safety to help victims of the earthquake-ravaged nation. They mended broken bones and soothed broken hearts. They saved lives. Their story, “Healing to Haiti,” will surely inspire you.

This article appears in the May 2010 issue of Pittsburgh Magazine.