I Now Pronounce Us Husband and Wife

Looking for a way to make your wedding more personal? Forgo an officiant and go the route of a self-uniting wedding. 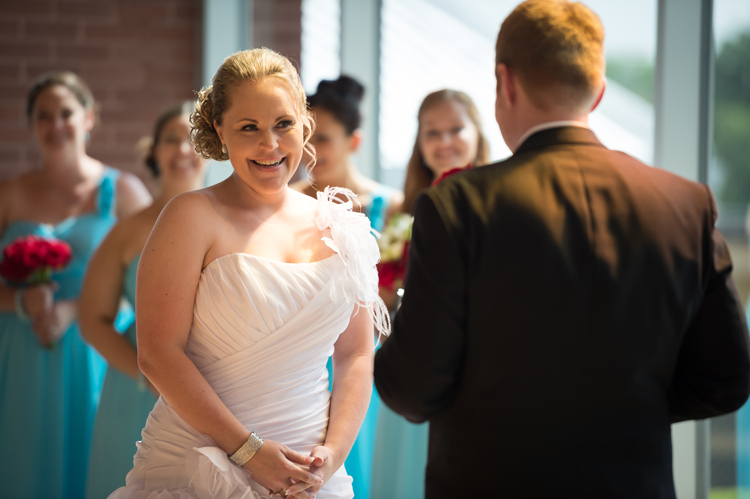 Brian Baur and Stacie Conley wanted to make all aspects of their July 11, 2015 wedding day as personal as possible. They chose the chapel at Robert Morris University, where they met as undergrads, for the ceremony site, and they chose to get a self-uniting marriage license to essentially declare themselves husband and wife.

“There’s not as many guidelines for the actual wedding ceremony [in a self-uniting wedding],” Brian says. “You still apply for a marriage license, but you have to essentially check a certain box when you're filling out the application, and once they issue the license all you need to do is say, ‘I take you, Stacie, to be my wife’ and she says that back to me and you need two witnesses … We thought that was a very interesting way of personalizing it.” 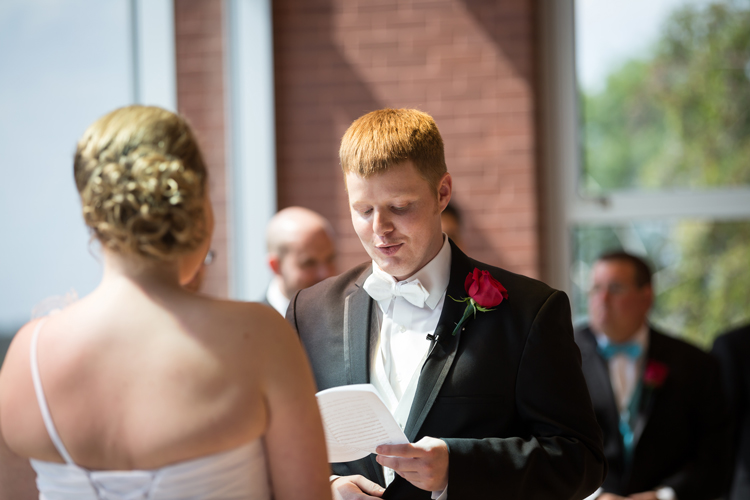 Baur, a partner at EventuresWeddings, says one of his clients opted for a self-uniting wedding a few years ago, and he and Stacie liked the idea.

Their wedding still included some traditions — Stacie’s father accompanied her down the aisle, and they had a traditional bridal party. Brian and Stacie wrote their own vows.

Brian’s mother and a friend of Stacie’s gave readings, but the texts were original and based on personal references to the couple. One of the pair’s favorite television shows is “The Big Bang Theory,” and the text written by Stacie’s friend referred to the character of Sheldon, a scientist, and manipulating an equation to find love.

“It really meant a lot to us,” Brian says. “The wedding day and especially the wedding ceremony reflected us.” 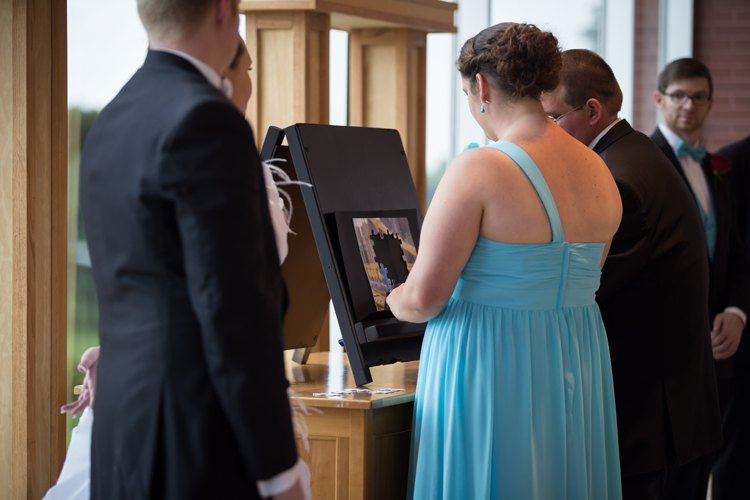 Instead of a unity candle, the couple chose to have a unity puzzle. During the ceremony, various family members added pieces of the puzzle, which formed a picture of Brian and Stacie. Brian’s business partner, who “facilitated” during the ceremony to keep the proceedings moving, spoke of how life is like a puzzle. He said the two of them together complete their puzzle but must work to make sure the pieces fit.

Baur says the ceremony length was similar to that of weddings with officiants.

“I don’t want to say it’s shorter because we’ve seen some ceremonies be 15 or 20 minutes depending on what couples want to do,” he says. “It can be two minutes if all you want to say is, ‘I take you Stacie to be my wife, I take you Brian to be my husband,’ but we wanted it to be a little longer than two minutes.”

Baur says the reaction was positive from those who may not have been familiar with self-uniting weddings.

“They all thought the ceremony was seamless,” he says. “Everybody liked the ceremony and said it was a very nice representation of us. We’re not religious, we’re not involved in any church, so this was more us.” 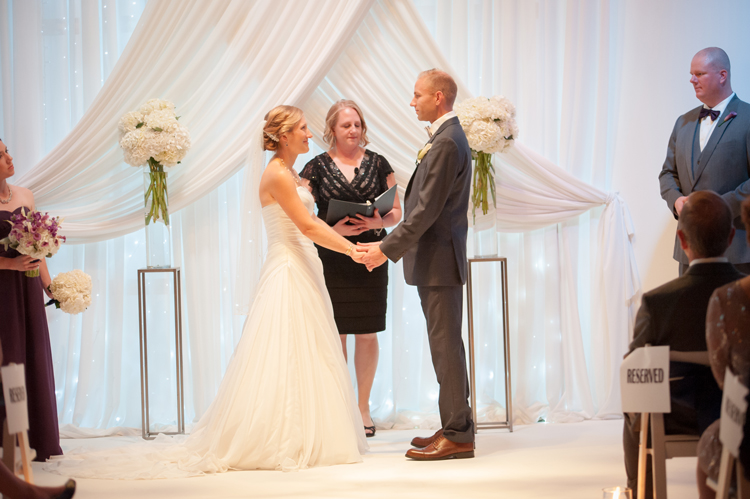 Emily Rentschler and Craig Drobek weren’t aware of self-uniting marriages until they interviewed the woman they later hired as their wedding coordinator — Heather Herrington of Flawless Executions.

“We did a little research … and it seemed like a great option for us,” Emily says. “Neither of us are members of a church here in Pittsburgh … so we didn’t really love the idea of finding a random person online to marry us. When this opportunity presented itself, we thought it would be great.”

The pair had their ceremony and reception at J. Verno Studios in the South Side on Oct. 11, 2015. Craig’s sister, Tina, served as emcee. 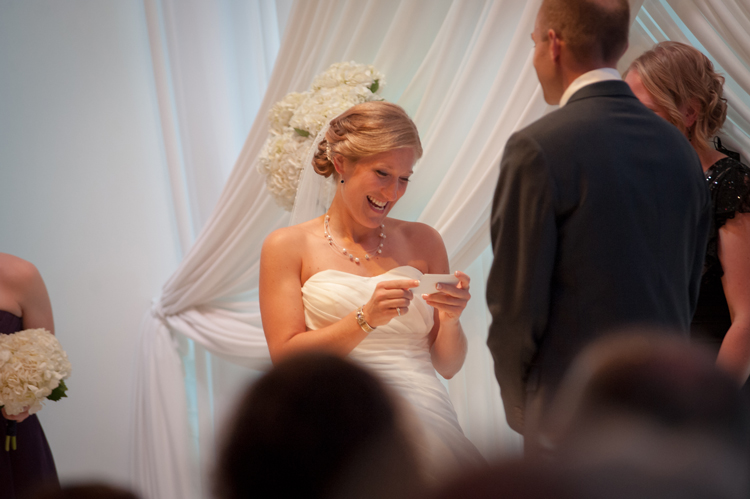 “We had somebody kind of leading the ceremony so we didn’t have to be up there orchestrating the whole thing,” Emily says. “We wrote a whole script for her to explain it to our guests and what is it and why we chose to do it.”

The couple also wrote their own vows, asked family members to give readings (the poem “Love” by Roy Croft and a modern wedding blessing) and included a traditional procession down the aisle.

They weren’t sure how they were going to handle the end of the ceremony when an officiant traditionally says: “I now pronounce you husband and wife” because they didn’t intend for Tina to make such an official pronouncement. Instead, they wrote closing words for her to recite:

“We never live so intensely as when we love strongly, we never realize ourselves so vividly as when we are in full glow of love for others. May all the years to come be filled with moments to celebrate and renew your love. Please seal your love with a kiss.” 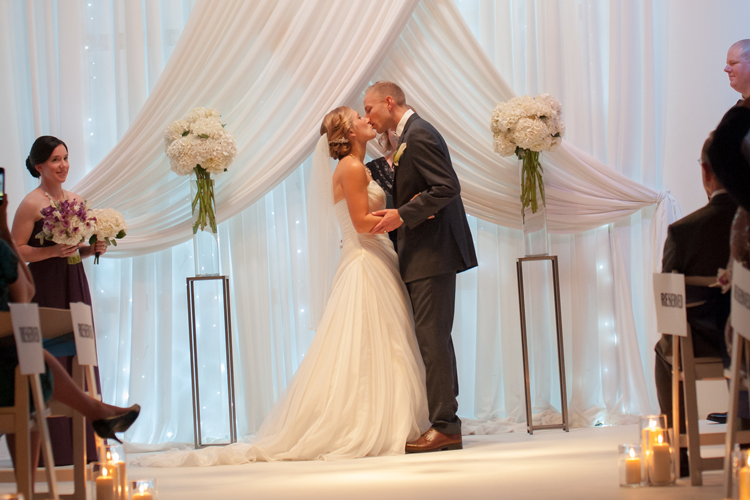