I Don't Drive On Diaper-Wearing Bridges

Have you ever exited the Squirrel Hill tunnels inbound and noticed that bridge with the mini bridge under it? The Greenfield Bridge. You know, that bridge with the giant nets under it, netting which is always pregnant with boulders the size of watermelons? Watermelon-sized boulders that weren’t placed there by the boulder-fairy but by the bridge itself shedding concrete matter? 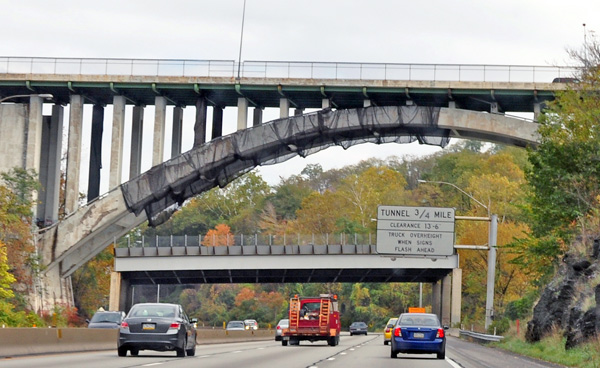 Did you ever stop to say to yourself, “Hmm. Let’s see. That bridge is in such a state of THE SKY IS FREAKING FALLING that they not only suspended nets to catch the giant chunks of probably pretty important concrete that are regularly falling from it, but they’ve also taken the extraordinary measure of building a raised concrete platform under it in an effort to catch the chunks of bridge that the net might miss. I wonder how much longer until the entire bridge comes down and I wonder if they built that little platform to withstand the weight of it. I think I’m not going to drive on that bridge anymore and when I have to drive under it, I’m going to floor the gas pedal so hard it weeps.”

The Greenfield Bridge is undergoing an evaluation to see if it is safe, if it can be repaired or if it needs to be rebuilt. It will be a couple of weeks before we hear the verdict. In the meantime, we’ve been treated to 15 minute stoppages as they have taken down the netting and replaced it.

Even though the federal government has classified the bridge as "structurally deficient," it’s still safe to drive on, by government standards, because while there are giant chunks of bridge matter falling from it, it’s just cosmetic. Just a flesh wound. They say.

I reject this on account of I don’t believe a bridge should poop enough concrete that it needs to wear a diaper.

So I’m gearing up for the city being told the bridge needs to be rebuilt and by “gearing up” I mean “planning alternate routes that will not bring me within five miles of the hell that is known as the Parkway East.”

This article appears in the April 2010 issue of PittGirl.
Categories: PittGirl