Bill Vanwie will help you keep current on Steelers and Pirates gear, as he vends near the stadiums. 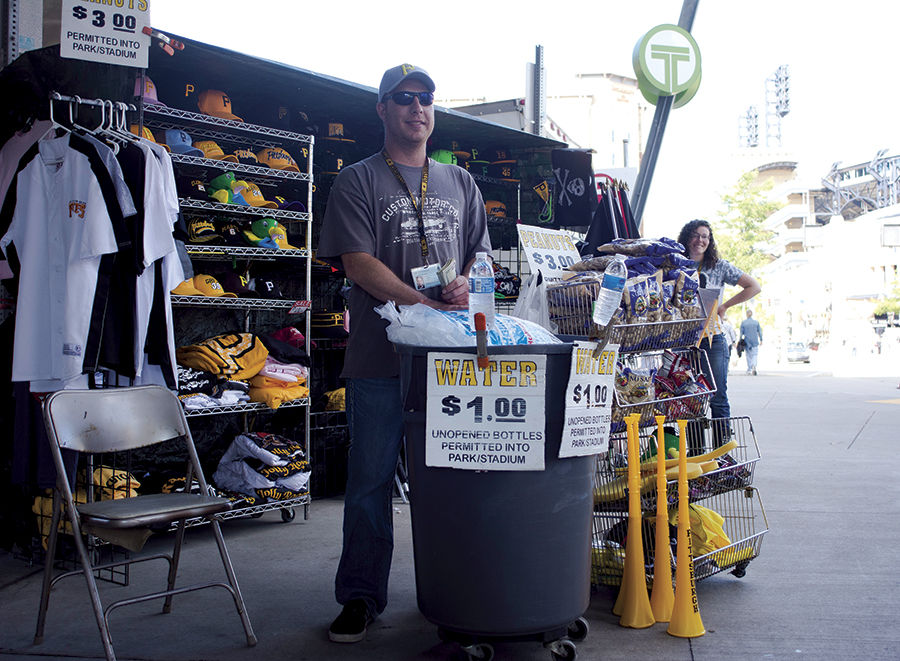 How did you get your start?
I waited tables and [tended bar for] 20 years in about 10 different states . . . My friend told me there was [a] City Council meeting about legalizing vending in the city for the first time. They had all these food trucks and people selling shaved ice outside the tennis courts on the North Side; no one had any permits. The [council] wanted to legalize so they could charge to vend and tax it. [Once you get a spot], if you follow all the rules and pay your fee, you can keep that spot.

And you have had the same spot outside PNC Park [at Sixth Street and Fort Duquesne Boulevard] since you started vending?
Since they built the stadium. I actually have a few spots now. I do Steelers, Pirates and Pitt [football] . . . I used to have a taco cart . . . and we had a hot dog cart in Market Square for two-and-a-half years. And I had another [vending spot] on Liberty and Fifth Avenue for two years. We had a soup cart there. I wanted to be the Soup Nazi of Pittsburgh.

How do you obtain the Pirates T-shirts and other items you sell?
I have about 10 different wholesalers. I have a couple of good friends who have been doing it for years. When licensing changes, a lot of companies have to sell everything. If you go to trade shows in Vegas, you can buy $20,000 worth of Steelers stuff.

How much of your time is spent on the bureaucratic process of permits and such?
Through the years, we’ve had our ups and downs. Lately, it’s been fairly OK. The thing that’s not very nice is that we’ll pay all this money for permits for different stands, and people will . . . set a few bags of stuff on the corner and try to sell it with no permit. They’ll cut you off and sell at the end of the game. I hire details of [off-duty] city police officers to patrol the area to see that no one is selling without a permit. I’ll pay for that out of [my] pocket.

This article appears in the July 2014 issue of Pittsburgh Magazine.
Categories: Business