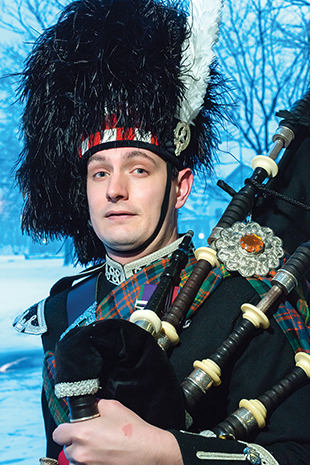 How did you start playing the bagpipes?
I’m originally from a small village in Northern Ireland called Ballygowan, and I heard a pipe band play when I was about 3 or 4 years old. I guess I just liked it and started taking lessons when I was 7 years old.

How many students are in CMU’s bagpiping program at any given time?
Well, that depends on how you look at it. There are currently three [with] a major [in bagpiping]; they are getting a degree in music with the bagpipe as their first instrument. And then there [are] 12 to 15 [who] are doing the bagpipe as a course — as a credit, to a degree. Then there are about 20 who are just taking lessons.

What draws those who are not music majors to the class?
There [are] the people who are getting their degree in … whatever it might be, they just decide … they’ve got this opportunity to learn the bagpipe, and they just take it up. And then there are the other ones who might have played a bit in high school before they came here … The university also has a very good pipe band, [the Carnegie Mellon University Pipes and Drums], so there are a lot of people who come to the university to play with the pipe band.

What gigs can a bagpiper get?
There is a huge demand for pipers at weddings and funerals — and also at large corporate events. It’s quite common to have a piper play. There is the whole kind of military thing as well. Pipers play at police and fire service events.

Where can one rehearse the bagpipes without waking up the whole campus?
In the University Center, there is a bagpipe room. It’s pretty much soundproof.

This article appears in the February 2014 issue of Pittsburgh Magazine.
Categories: Community Feature