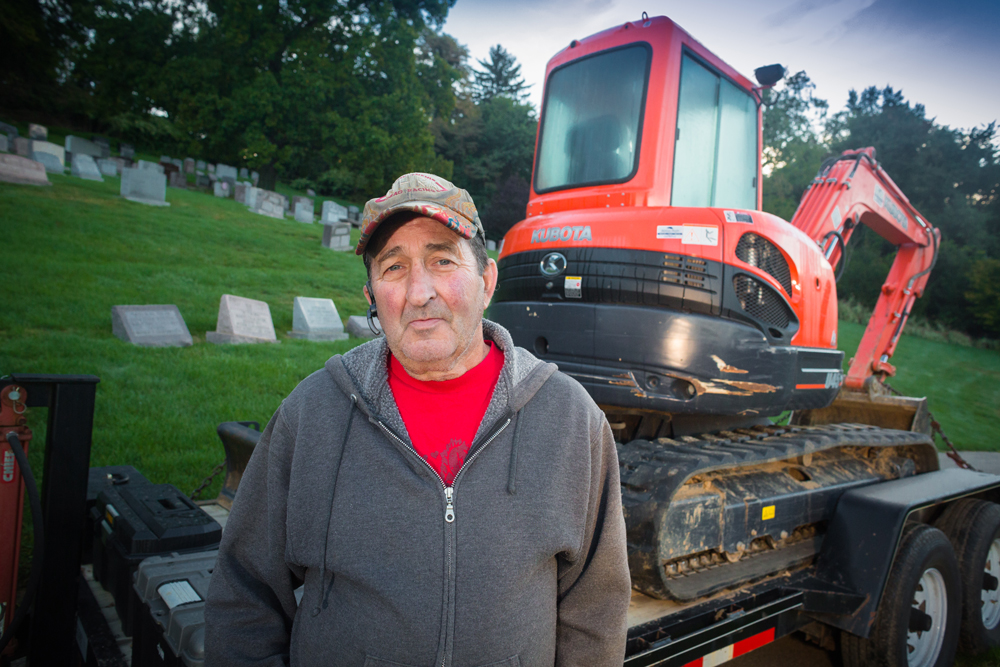 How did you start digging graves?
My dad and two uncles owned a tombstone and monument company. One day, a woman who owned one of the cemeteries on Cemetery Lane [in Ross Township] called in a panic because her gravedigger had quit right before a funeral. My dad asked me if I wanted to earn some money, and I spent eight hours digging with a pick and shovel. She gave me $100. It was the late ’60s, so I felt like a millionaire.

How many cemeteries do you service now?
About 30.

What’s a typical job like?
The funeral director gives us a day and time. The church then sends over a work order giving us the name and address of the person and the plot where they are being buried. Usually, I will go out and do a dry run to see the spot. I stick around for the funeral in case anything goes wrong.

What kinds of things go wrong?
The way pallbearers step up to the grave, you have an open piece of ground on either side. I have seen people stick their foot in and fall down on their rear ends. We now put aluminum boards on either side. You’re dealing with people at the worst times, and they’re stressed and distracted, so we make sure there are no gopher holes on the way to the gravesite.

What’s the oddest thing you have seen during a burial service?
This one time, as the priest was saying the prayer, these two gentlemen stood next to each other. Well, I shouldn’t call them gentlemen; they were a couple of fools. As the priest is speaking, one says, “Mom promised me the house” and the other says, “No, Mom promised me the house.” One pushed the other one, and the other pushed him [back]. I wasn’t sure what to do, so I just called the police.

You service the Penn Forest Natural Burial Cemetery in Penn Hills, an eco-minded cemetery where vaults are not allowed and each body is housed in a biodegradable casket, if any. Is it strange to bury someone just in a cloth shroud?
No, that’s the way they did it in the old, old days. I look at [standard burials] and think, “That costs a lot of money.” I see where [cemetery owner] Pete [McQuillin] and his clients are coming from. They think, “Why am I being put in a box and then another concrete box? Why not just go natural?” Pete has sold an awful lot of plots.