City and state officials have commissioned two local artists to begin the process of designing the bridge’s new aesthetics. Here’s how you can share your opinion on the project. 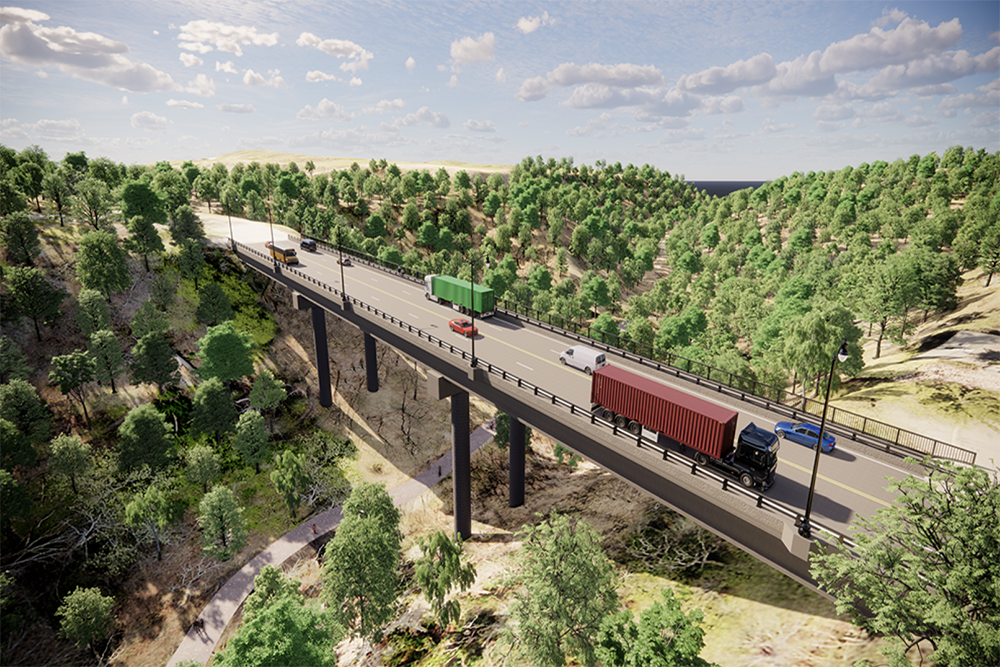 The newest components of the downed Fern Hollow Bridge are being hoisted into place — a pair of 100-ton steel beams.

The beams, which officials say are the longest ever used in the Pittsburgh area, traveled more than five hours from Blair County to Frick Park, where the construction of a new bridge has been in the works since the existing structure collapsed in January, injuring 10 and prompting discussion over the reliability of the city’s infrastructure.

But even amid ample talk of these massive beams and other industrial elements — including the 770-ton crane that helped move them into place — there’s also discussion of aesthetics.

In conjunction with other organizations such as the Federal Highway Administration, the Office for Public Art, Swank Construction Company and HDR Inc., city and state officials have named artists who will “deliver public art that captures the spirit of Pittsburgh while remaining sensitive to the intimate setting of Frick Park and the surrounding natural area,” according to a press release.

John Peña will provide artwork to enhance the pedestrian and cyclist bridge-user experience, and Carin Mincemoyer will integrate artwork that augments the trail-user experience below the Fern Hollow Bridge.

In a statement, the city said that emergency declarations signed earlier this year by Governor Tom Wolf and Mayor Ed Gainey allowed the city to immediately turn the Fern Hollow Bridge Replacement Project over to PennDOT for management of design and construction. This meant work on repairs could begin right away — something of great importance to the more than 14,000 travelers who have been detoured around the site for most of this year.

But even though these emergency declarations expedited the overall design and construction process, the accelerated timeline did not allow for robust community engagement, the city says. It hopes to further engage the community in the bridge’s rebuilding efforts by gathering comments from the public to determine what they would like to see, or what they envision when it comes to art on the new bridge.

Residents are encouraged to offer their insights on how the artists can best represent the community and its relationship with the bridge.

People can share a memory, personal story or historical fact about the bridge, park or the adjacent neighborhood with the team, as well as identify any community groups or members the artists should take into consideration during the first phase of work.

Construction of the new bridge could be done as early as the end of this year — supply chain shortages and other potential obstacles permitting.