PittGirl confronts her wildest fears on the raging rapids of the Mon River. 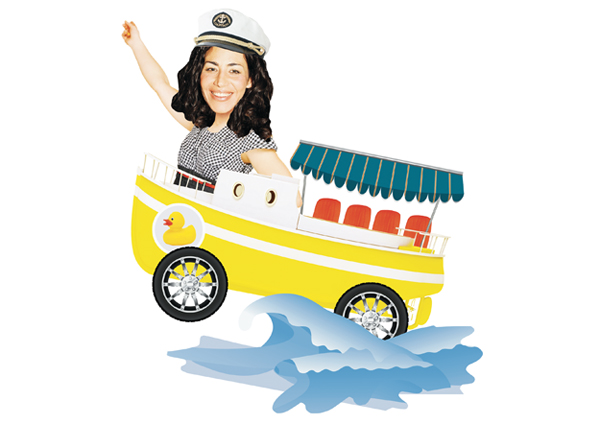 It came from over the loudspeaker: "We’re going to be going into the river very shortly here and … ” I have no idea how the rest of that sentence went because, internally, alarms were going off—loud alarms and sirens whose whoop-whoops drowned out the voice of our Just Ducky tour guide, who was probably finishing that sentence with, “ … we’re all going to die.”  The tiny people in my brain were running around frantically pushing giant red buttons and engaging emergency procedures. Defcon 1. Water. Lock it down. Bail out. PANIC.

And panic I did. Inside. On the outside, I couldn’t allow my children to see that their mother feared for her life. We’re in a truck that’s going to turn into a boat. Isn’t that neat? Just wait. You’re going to love this, kids! Quack! In the face of sheer terror, my fake, blinding smile would have put Miss America to shame. Also, I wish for world peace.

Before entering the water, the land portion of the tour was chock-full of interesting facts about Pittsburgh—ones that I wasn’t aware of—that were relayed in an upbeat, good-humored manner by tour guide Ray Brooks, a 20-something Pittsburgher whose running commentary captivated the audience.

I learned that Grant Street’s street level was once higher than it currently is. Much higher.

I learned that the Smithfield Street Bridge is the third bridge in that location. The first was made of wood and was called the Monongahela Bridge before it burnt down in 1845’s Great Fire of Pittsburgh. What are the chances of me ever crossing a bridge that long made of wood? … Is negative infinity a number?

I learned that, outside of New York, the Cultural District has the most theaters in a concentrated area.

I was so captivated by hearing facts about Pittsburgh that I almost forgot we would be entering water at some point during the trip. Until Ray started with, “We’re going to be going into the river very shortly here and … ”

I hate boats. I will never take a cruise because the chances of me swimming to a distant shore after the rogue wave hits are less then negative infinity (again, assuming that number even exists). If I were on a yacht, I’d probably hang onto a random beam like a desperate koala bear. Fishing boats? No. Ferries? No. Kayak? Ha!

Heading from the Mon Wharf into the Monongahela River was terrifying enough for me as the truck-turned-boat caused a large splash and an internal horror-movie scream that I’m pretty sure several fish heard. But I smiled on. Isn’t this fun? If I puke, it has nothing to do with fear, kids!

Ray’s bubbling personality and enthusiasm for the information he was relaying calmed me down enough to start enjoying the ride. My grip on the edge of the boat loosened a bit. This isn’t too terrible! Look how pretty the city is from here. I can see …

“Would any of you kids like to take a turn driving the boat?”

Defcon 1. My grip on the edge of sanity now slackened as a 9-year-old boy was given permission to drive the boat. My life now rested in the hands of a boy who hadn’t been on earth an entire decade. I resisted the urge to ask to see his boating license.

The laughing passengers quacked happily at a passing boat. I prayed fervently for deliverance from this evil. Then they let a baby drive. God has a cruel sense of humor.

A child who hadn’t been alive for a whole year yet was now holding my fate in his chubby hands—one of them on the wheel, the other gripping a sippy cup of juice. I reached for a life vest, telling my children, “I just want to feel how squishy it is! Everything is fine! Look at the cute baby!”

Ray eventually parked us safely on land, where I finally admitted it was an experience worth the fear. I learned a lot. I’m proud I did it. I’m proud I survived. I’m proud I resisted the urge to shout, “Hallelujah, I’m alive! I am suing all of yinz guys for emotional trauma. You, too, little baby!”

This article appears in the October 2011 issue of Pittsburgh Magazine.
Categories: From the Magazine, Hot Reads, PittGirl