Now you don't need to have the personality disorder and compromised morals of a Hollywood star in order to party on the red carpet like one. 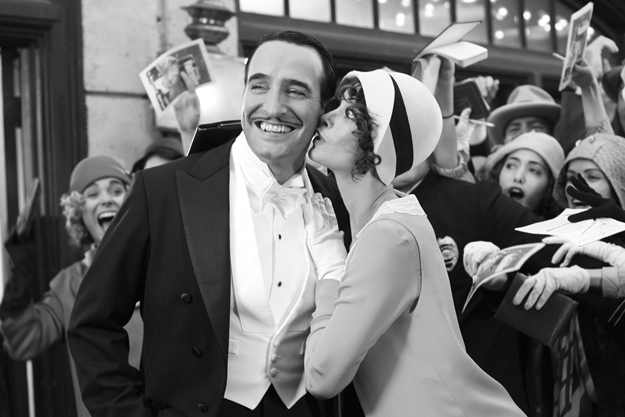 Jean Dujardin and Berenice Bejo in The Artist

It’s Oscar weekend. I open with this reminder because, as Pittsburgh’s resident movie guy (okay, there are a few more, but still,) I’ve had to remind pretty much everyone I know that yes, the ceremonies are this Sunday. There’s not much buzz surrounding Hollywood’s great big back-pat this year. For one, this season was devoid of an Avatar or Lord of the Rings populist powerhouse, or even a particularly beloved underdog like The King’s Speech or Slumdog Millionaire. And then there’s the fact that the hosting gig has defaulted, once again, to Billy Crystal.

Even more sobering, all the top prognosticators agree that all the awards are basically foregone conclusions. (Spoiler alert, for those who are highly invested in who wins and yet have apparently read nothing about the race so far.) The Artist will win Best Picture. Its lead, Jean Dujardin, will be taking Best Actor. The ladies from The Help are going to win their respective categories — Viola Davis for Best Actress and Octavia Spencer for Best Supporting Actress. There’s a razor-thin chance that creepy old man Max von Sydow, recently of Extremely Loud and Incredibly Close (and most famously of Ingmar Bergman’s The Seventh Seal), could steal Best Supporting Actor away from Christopher Plummer’s turn in Beginners, but probably not.

So the night itself has all the suspense and mystery of a phoned-in dinner theater murder mystery. Your office Oscar pool is going to come down to who randomly selects the Best Documentary Short Subject correctly. And unless Woody Allen wins Best Original Screenplay for Midnight in Paris and goes completely off the rails, the evening’s speeches aren’t likely to spice things up, either.

So how to spice up this year’s Academy Awards? Get out to one of a pair of spiffy Oscar events our fair city has to offer.

Young Filmmakers Workshop
High- and middle-school students and their parents can check out a celebration of Pittsburgh’s Hollywood connection at the Heinz History Center. The Center and Steeltown Entertainment Project are putting together the afternoon, which will feature a one-hour filmmaking seminar and screenings of Carl Kurlander’s My Tale of Two Cities, about his return from Hollywood to Pittsburgh, and the short Pittsburgh: Hollywood’s Best Kept Secret.

Young aspiring filmmakers can learn a thing or two and discover just how they can make their big-screen ambitions become a reality, without venturing too far beyond their backyard. And grown-ups, this is not just a baby-sitting mission; My Tale of Two Cities is more than worth seeing. Kurlander, the screenwriter behind St. Elmo’s Fire, mirrors his personal transformation with that of his city’s; his story landed him on Oprah a few years ago. The whole thing is part of the larger “Take a Shot at Changing the World” contest, with cash prizes for proud young ‘Burgh filmmakers.

Highmark Presents Lights! Glamour! Action!
Those with red-carpet dreams, however, would be better served at the Pittsburgh Film Office’s annual “Highmark Presents Lights! Glamour! Action!” party, a swank celebration of all things ritzy. The Heinz Field event is a fundraiser for the PFO, which helps keep all those Hollywood productions rolling through town; if you’ve ever gloated (as I have) over the fact that you live in Gotham City, you have them to thank.

Speaking of Batman and company, one of the big-ticket items in the annual silent auction is a Dark Knight Rises poster autographed by the cast and crew of Christopher Nolan’s superhero epic. The auction is enough to attract film buffs all on its own, but has a number of items for music lovers as well — including a backstage meet-and-greet with local rocker Bret Micheals at a forthcoming concert.

The black-tie optional event is wrapped around a big-screen viewing of the Oscars themselves, along with the opportunity to mingle in style with fellow aficionados. Spring for the VIP ticket and you can get in an hour and a half earlier for an exclusive champagne reception and — music to every ‘Burghers ears — free valet parking.