How to Make the Best Eggnog Ever

This holiday, get reacquainted with the exotic origins and extraordinary flavor of vanilla. 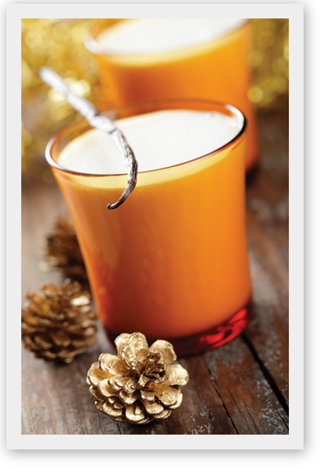 With its rich, deep taste, vanilla is one of the most popular flavors in the world. During the holidays, countless recipes are enhanced by its flavor. Yet despite its complexity on the palate, the word “vanilla” has somehow evolved to signify something less than exotic; it can be used as a synonym for plainness. It’s hard to understand why. In the world of spices, vanilla is expensive—and, therefore, precious; its cost is second only to saffron.

From its early history as an ingredient prized by Aztec royalty to its cultivation in modern times—beyond Mexico, every single flower on the vanilla plant must be pollinated by hand—little about the spice is ordinary. The vanilla plant, an orchid that produces a pod fruit usually referred to as a “bean,” has historical origins that can be traced back at least 1,000 years to the Eastern Coast of Mexico (near Veracruz). Here, the Totonac Indians cultivated the plant in the jungle and sent it north to the Aztecs, where it was ground up with cacao beans and other spices to create the world’s first chocolate drink.

The first Europeans to taste it were the Spanish; they called it vainilla, which loosely translates to “sheath” or “husk,” an accurate descriptor for the plant’s long, narrow bean. Its cultivation failed in Europe, however, until a Belgian botanist realized that Melipona bees (the plant’s natural pollinators) did not exist outside Mexico, and managed to pollinate the plant by hand in the late-1830s.

The first large-scale production of vanilla took root on the French island of Réunion in the Indian Ocean, which was also known as the Île Bourbon (named after the Bourbons, the royal family of France); thus, the prized vanilla produced here today is known as Bourbon vanilla. Ultimately, most cultivation of this type of vanilla moved to the much-larger nearby island of Madagascar, and that’s where the best-known American producers, such as Nielsen-Massey, source their Bourbon vanilla.

Growing the plant is just one part of a laborious process. It’s careful curing and conditioning of the vanilla bean through cycles of wet and dry heat, then aging, that creates the spice’s intricate flavors, which can range from smooth and rich to spicy and sweet to flowery and woody. The meticulously processed pods are then chopped and strained with a mixture of water and alcohol, and aged to make vanilla extract—a key ingredient in festive December recipes.

Adapted from a recipe of a well-known vanilla extract brand, McCormick, this easy pound cake delivers a sweet, satisfying slice of vanilla flavor.

Preheat oven to 325 degrees. In a large bowl, combine two cups flour, one teaspoon baking powder, one-quarter teaspoon salt and one-eighth teaspoon ground nutmeg. Separately, beat one cup (two sticks) of softened butter with one-and-one-quarter cups sugar in a large bowl using an electric mixer on medium speed for five minutes (until light and fluffy). Beat in four eggs, one at a time. Gradually beat in half of the flour mixture. Add five teaspoons pure vanilla extract, then beat in remaining flour. Pour batter into a greased and floured 9-by-5-by-3-inch loaf pan. Bake for 60 to 65 minutes or until toothpick inserted into center comes out clean. Cool on wire rack and serve with ice cream. Serves 12.

Combine first three ingredients in a large saucepan; stir well. Cook over medium-low heat until thoroughly heated (do not boil). Combine eggs and sugar in a medium bowl; stir with a wire whisk until well blended. Gradually stir about one-fourth of hot mixture into egg mixture; add to remaining hot mixture, stirring constantly. Cook mixture over low heat, stirring constantly, 20 minutes or until mixture is slightly thickened and reaches 160 degrees.

Meditating over the quality of the vanilla extract in your cupboard might not be at the top of your to-do list during this busy, festive time of year. But for the curious, questions linger: Is it worth spending the extra cash to buy real vanilla extract? What exactly is artificial vanilla flavoring? What’s the difference Madagascar vanilla and Mexican vanilla? Read on to find out.

Flavor: A compound called vanillin is the primary flavor component of vanilla beans—but they also contain more than 200 volatile compounds that contribute minor flavor notes such as honey, caramel, butter, tobacco, dried-fruit and clove. This is what makes true vanilla so superior to artificial-vanilla flavoring made with synthetic vanillin—a byproduct of liquid waste from soft-wood pulp used in paper manufacture. Synthetic vanillin can also be produced from sources such as coal-tar extracts, and it’s commonly used in soft drinks as well as in commercial candy bars and ice-cream products. Because it’s less expensive, about 90 percent of the vanilla flavoring consumed in the United States is artificial. For the best results in home baking, avoid the artificial flavoring and always use pure vanilla extract.

Varieties: Bourbon vanilla grown in Madagascar is smooth and rich, with a sweet flavor that’s perfectly suited to baking; this type accounts for 60 percent of the world’s vanilla. It’s perhaps the easiest high-quality vanilla extract to find for purchase; locally, Penzeys Spices (1729 Penn Ave., Strip District; 412/434-0570, penzeys.com) has its own brand of Bourbon vanilla. Mexican vanilla has a reputation for its fine, complex flavor with a hint of spiciness or sharpness. Tahitian vanilla is distinctly flowery and aromatic. The latter two types can be harder to find in stores but can be found online in various forms (check williams-sonoma.com). McCormick, the most common supermarket brand of pure vanilla extract, doesn’t specify the origins of its vanilla beans, but U.S. regulations ensure that any label saying “pure vanilla extract” delivers the real deal (with no artificial flavors).

Vanilla extract must contain at least 35 percent alcohol—vanillin and other flavor compounds are more soluble in alcohol than in water—and this diminishes subtle flavors. Working with vanilla beans adds only a bit more work to a recipe and can yield a more intense vanilla fragrance and flavor.

To use, simply slit the beans in half, scrape out the seeds with the tip of a spoon and add them to a recipe (try them in cheesecake or flan). You can find whole vanilla beans locally at Penzeys.