How to Make a Mt. Washington Wedding Proposal Even Better

A lot of grooms-to-be propose on Mt. Washington. Not many decorate beforehand. 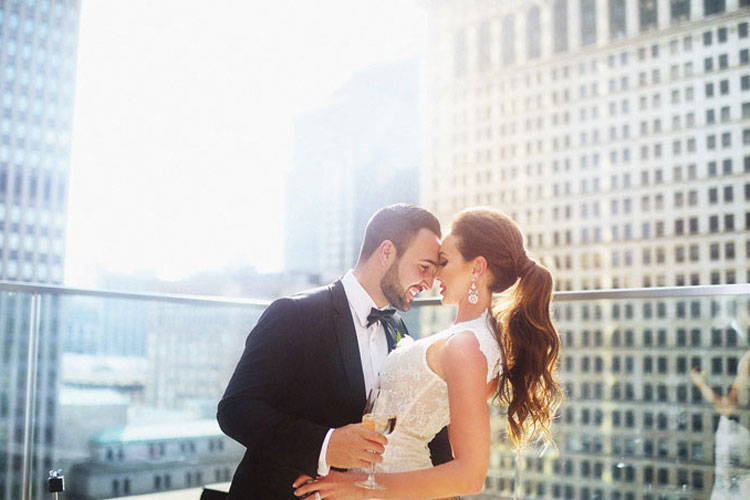 Gerry Raymond and his girlfriend, Kara Kisty, had a “date night” once a week, but he had a little something special planned for this one.

On this particular night, he suggested they get dressed up and go to the Capital Grille, where they’d had their first date a little more than two years before. It was a Tuesday night, so Kara thought it was a little odd to get dressed up, and she definitely wasn’t expecting a proposal.

“We were going on a lot of trips so I thought he was always going to propose maybe on one of the trips … but he never did,” Kara says. “But he works a lot and gets random days off, and I’m a special ed teacher, at the time I was getting my masters, so I didn’t have school the next day.”

When they arrived at the Capital Grille, she remarked they were sitting in the same booth where they had their first date. Gerry smiled and said he had planned that.

Still, she didn’t suspect anything too unusual because Gerry was typically an attentive boyfriend, bringing home flowers and generally acting romantically.

Then he suggested they get drinks; he told her he had rented a car service and got a hotel room for the night, so they wouldn’t have to drive. When he suggested a bar on Mt. Washington, she questioned him again — it wasn’t a neighborhood they typically patronized.

But once they arrived at the overlook, she knew; Gerry had enlisted a friend to make sure the spot looked extra special that night. 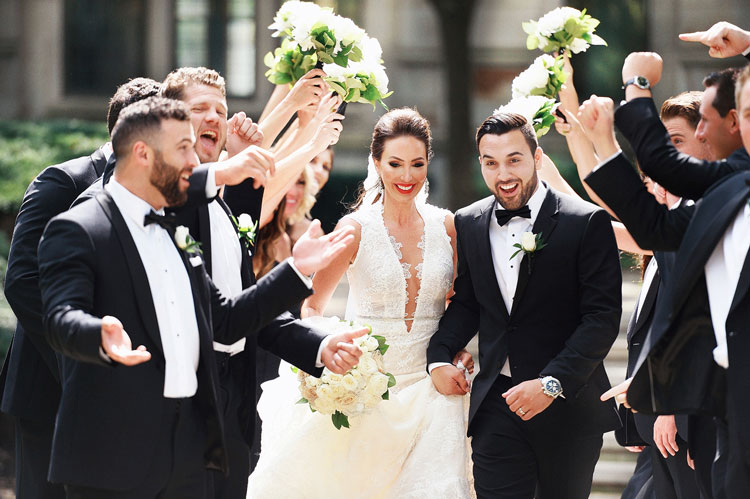 “He had a million candles all the way lined down with like a million roses and rose petals and our song [“Thinking Out Loud” by Ed Sheeran] blasting over the speakers,” she says.

A table with Champagne, roses and signs that spelled out “Will you marry me,” as well as a photographer to capture the moment, all were waiting.

A crowd had gathered, waiting for the couple to arrive. After she said yes, everyone erupted into applause.

More surprises awaited. Gerry suggested they go to Sienna Mercato Downtown for drinks, and when they arrived at the rooftop bar, Il Tetto, she found all of their friends waiting to celebrate with them.

“I wouldn’t have had it any other way because you could tell he put so much thought into it,” Kara says.

Gerry and Kara married on Aug. 26 at Heinz Memorial Chapel with a reception at Hotel Monaco. 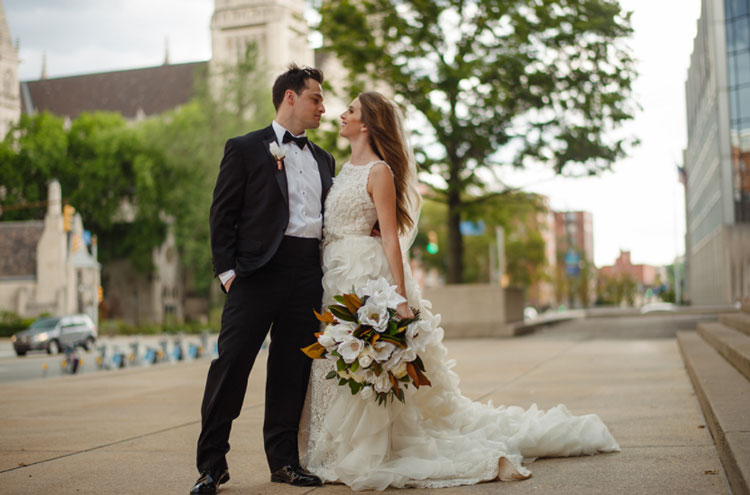 Photos by Michael Will Photography

John Scialabba and Stephenie Anderson also had an audience for their Mt. Washington proposal, albeit a smaller one.

John had suggested they go to a church Stephenie loved, St. Mary of the Mount, for Mass one November day in 2015. On the way up Mt. Washington, John was so nervous he almost ran into a police car turning in front of him.

“It was not a good start to the night,” Stephenie says.

“Even though I knew she was going to say yes — we had talked about getting married — it’s still the most nervewracking moment of your life,” John says.

He convinced Stephenie to head out on the overlook before church, and it was there he told her he couldn’t wait another minute, another hour, another day before asking her to be his wife.

Then, to their amusement, their moment was interrupted when someone standing on their balcony across the street let out a “whoo!” 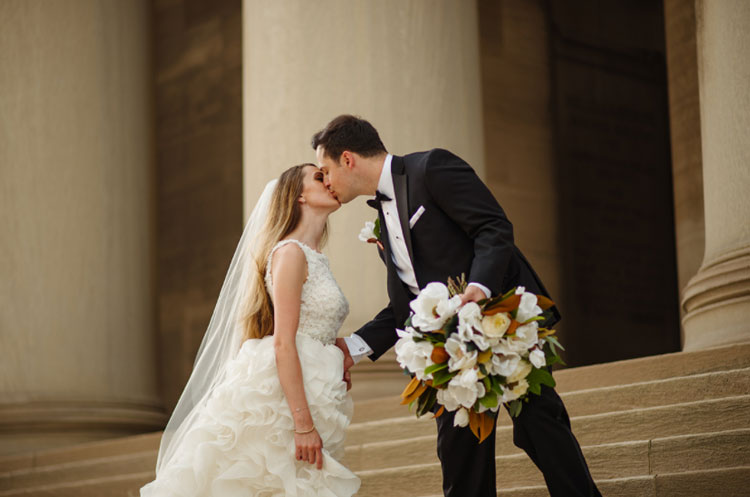 “The first person to know we were engaged was some random guy on his balcony screaming, ‘Yeah!’ and clapping,” Stephenie says.

“It was probably his fifth [proposal] that day, he just sits up and screams at people,” John says with a laugh.

The couple went to Le Mont to celebrate and ending up sitting next to a couple who had also got engaged on Mt. Washington; they were celebrating their anniversary and bought John and Stephenie a bottle of Champagne.

“Everyone has their own story,” John says.

John and Stephenie married on Aug. 19 at St. Paul Cathedral with a reception in the Carnegie Music Hall foyer. 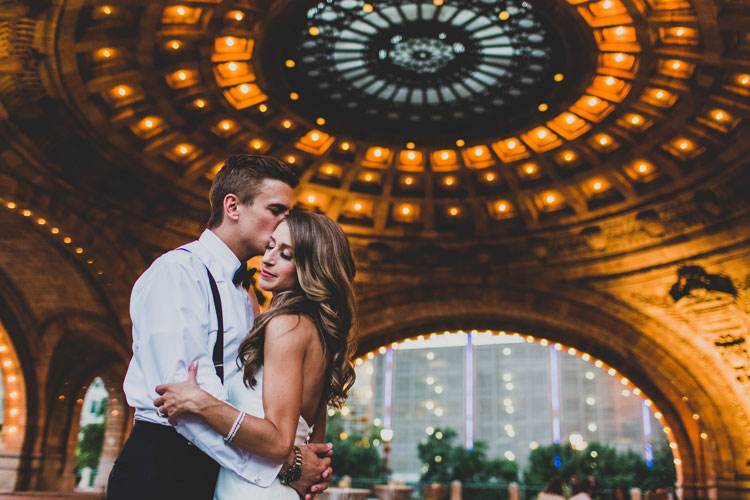 Zach Herd had been trying to ask Mallory Souleret’s father’s permission to marry his daughter for months. But something always got in the way.

“We live in Atlanta, and I wanted to ask her dad in person. I didn’t want to do it over the phone,” he says.

But when Mallory’s family came to visit the couple, Zach couldn’t get her father alone. When the couple went to her parents’ house for Christmas, it seemed that every time Zach did get Mallory’s dad alone, her mother would appear.

Finally, Zach asked her dad to help him with something on their bikes in the basement.

“He showed me how to change a gear, and he could tell that I was sort of distant, not paying attention, and finally I said, ‘I didn’t really want to talk about this. I love your daughter and really want to spend the rest of my life with her, and I want to ask your permission to ask her to marry me,’” Zach says. “And he smiled and said, ‘I've been waiting a long time for this occasion,’ and I said, ‘You’ve been waiting a long time!’”

Oh, by the way, Zach added, it’s happening in about 20 minutes. 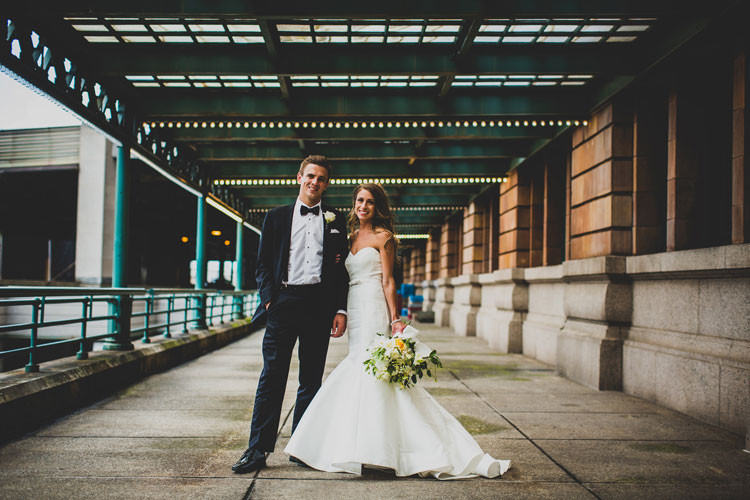 That night, the couple was headed to a friend’s birthday party in Oakmont. On the way, Zach told Mallory he wanted to stop and see another friend who lived on Mt. Washington while they were in town.

They parked in front of their friend’s house, conveniently located near the Mt. Washington overlooks, and Zach suggested they stop and see the city view. Still, his plans were almost thwarted. First, Mallory said they probably shouldn’t delay if they wanted to make it to the party. Then, she realized she had to take an antibiotic because she’d had bronchitis the week before. She needed to take the medicine with food, so she grabbed a package of saltines to bring with her onto the overlook, despite Zach’s protests.

Finally, as they were gazing out at the city, Zach got down on one knee, asked her to marry him, and promptly put the ring on the wrong finger.

But Mallory, through tears, said yes.

She says now she should have sensed he was nervous on the drive from Atlanta that day, but she wasn’t suspecting a proposal.

“I knew that he wanted to ask my dad and my parents are pretty bad at keeping secrets and my dad never hinted at anything so I figured it wasn’t going to happen [until after the holidays],” she says.

But both say it ended up being perfect timing — and the perfect spot.

“It was a really clear night, and it was nice because we had spent a lot of time up there going up and down on the incline and looking at the city,” Mallory says. “I was born and raised in Pittsburgh, and he used to live in Pittsburgh, too. It was just a very nice place to do it.”

The couple married on July 8 at Baldwin Community United Methodist Church, with a reception at The Pennsylvanian, Downtown.