How to Go From Baby to Big Kid Room

Local interior designers share their tips for transforming a nursery into a flexible forever space that will grow with your children. 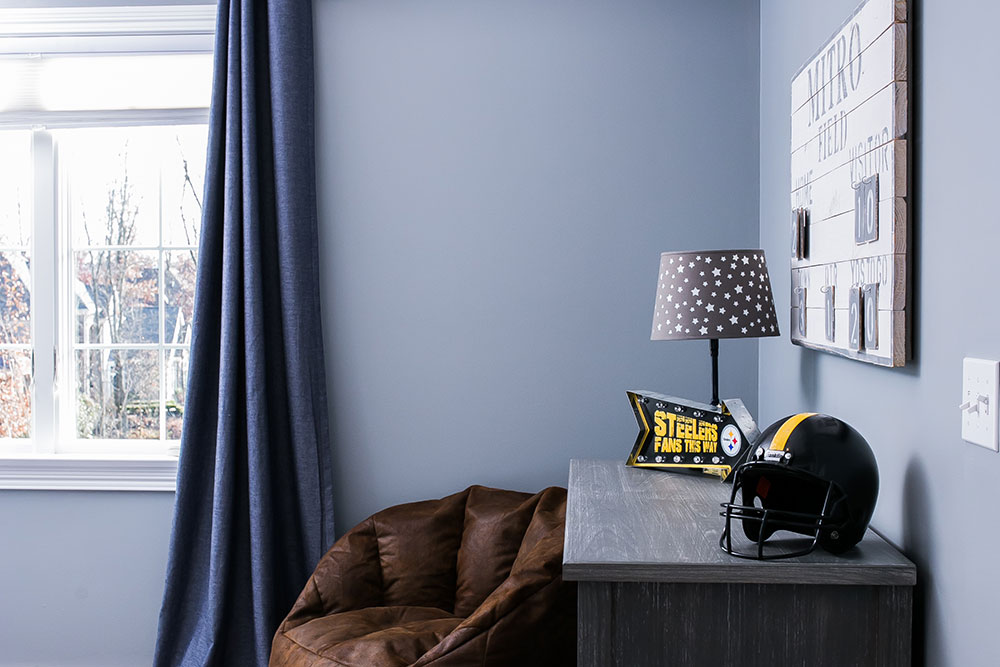 Full-grown design clients may not always know what they want, but they tend to know what they like. Modern or traditional. Rustic or glam. Vibrant shades or earth tones.

Tots and tikes, on the other hand, are a fickle lot. How do you decorate the room of a client who loves butterflies one day and basketball the next? Or who absolutely refuses to let you move even one brick of LEGO architecture?

For three Pittsburgh-area designers who have some experience with this age — both clients and their own kids — the answer is “flexibility.”

Timeless, durable foundation pieces and easy-to-update decor ensure that even the most extravagant nursery can be transformed and take a bedroom from toddlerhood into middle school and beyond.

“Kids’ rooms are one of my favorite things to do,” says Betsy Wentz, owner of Studio B Interior Design in Sewickley, who has a growing number of kids’ rooms in her portfolio. “I think people are putting more energy, time and money into their kids’ rooms now.”

And she isn’t complaining because, well, they’re an awful lot of fun to tackle, even if you’re not a professional.

Not convinced? Here are some professional tips for making over your kid’s room. 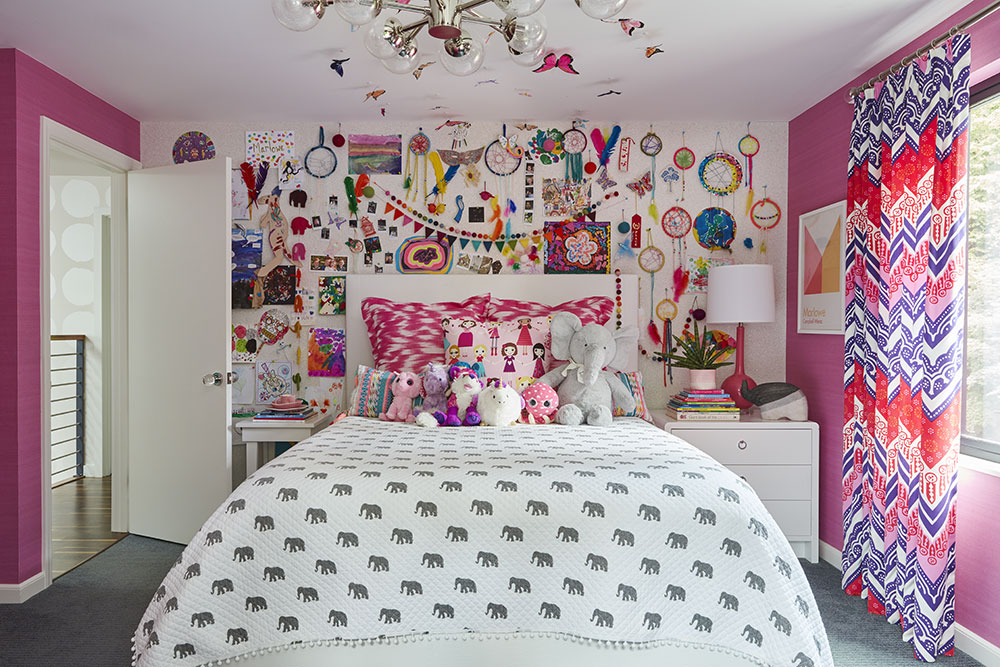 DREAMCATCHERS TAKE CENTER STAGE IN THIS ROOM BY STUDIO B INTERIOR DESIGN.

Like any good bedroom design, a kid’s room should begin with the basics: furniture and flooring.

For soon-to-be parents decorating their first nursery, Gail Wright, owner of Gail Wright at Home in Jefferson Hills, suggests investing in quality furniture with neutral finishes — such as whites, wood tones and even metallics — that will last for years.

“I hear people say, ‘I don’t want to spend a lot of money on kids furniture because my kids are just going to destroy it,’” Wright says. “But higher-quality pieces will withstand wear and tear. We’ve had my daughter’s furniture for five years. She’s rough on it, and it still looks brand new.”

She also encourages clients to forgo baby-specific items, particularly a changing table, an expensive piece that she says can be replaced by a good dresser with a changing pad on top.

Lauren Piasecki, one of the founding partners of Black Cherry Design in Lawrenceville, typically urges her clients to skip the traditional and often uncomfortable rocking chair in favor of something more stylish and cushy. The piece can later transition from a prime place for parents to feed their babies to a soft spot for teens to lounge with a book. Opting for a slipcovered design also allows the colors and prints to change with the rest of the decor.

But for those parents who have already made — and are perhaps even regretting — their nursery purchases, Piasecki believes the solution is to add vintage.

Vintage furniture is solidly made, often cheaper than new and can be quickly updated with a coat of paint, she says.

Of course, furniture is not the only big-ticket item parents need to consider when designing their child’s room. What sits under the furniture is just as important.

For homeowners with hardwood, flooring is fairly straightforward. Area rugs can be swapped out as the child ages. As for those with carpeting, the design decision is likely to last for a decade or more. That’s why Wentz opts for charcoal, which works no matter the age, gender or color scheme.

“It goes with everything and doesn’t show anything,” she says. She’s used it in each of her own children’s rooms.

EVERYTHING IN ITS PLACE 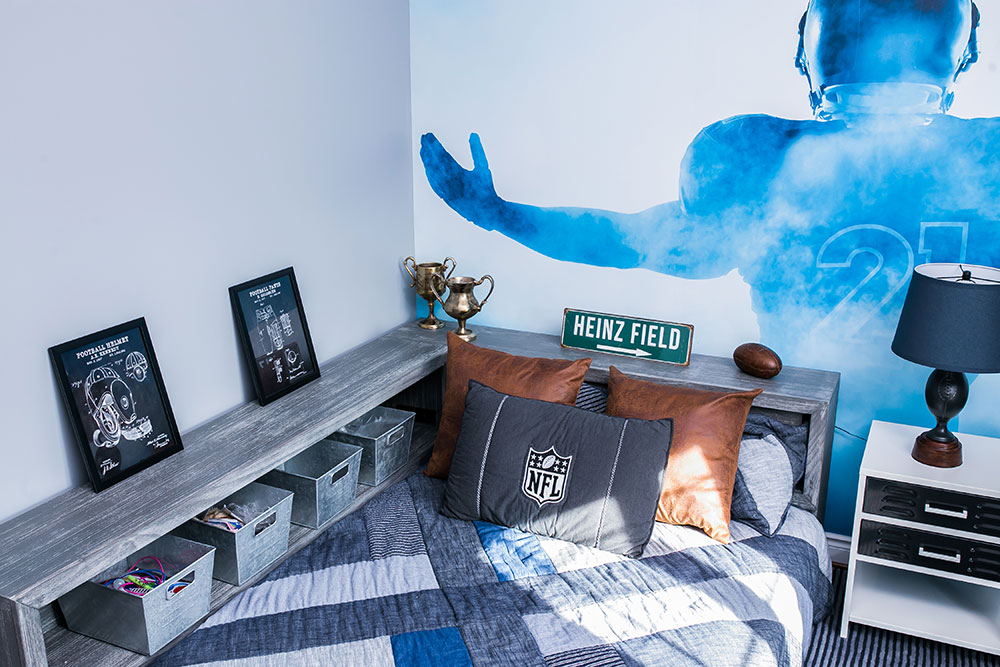 STORAGE IS KEY IN THIS ROOM BY GAIL WRIGHT

Not so long ago, Stan Adamik, Piasecki’s design partner at Black Cherry, found himself in a familiar parental conundrum. He had a pint-sized client with an enormous stuffed animal collection, and very little space to store them.

Instead of going the traditional route and packing them into a closet bin or piling them into a toy hammock, he decided to display them, building a shelving unit and effectively turning storage into decor.

“I thought it was so smart, corralling all of that stuff in one place,” Piasecki says.

Because if it’s one thing a kid’s room always needs more of, it’s storage. It’s why Piasecki almost always opts for a closet organizer, particularly in older-era construction.

“Your typical, older Pittsburgh house will have a shelf with a rod,” she says.

That just doesn’t cut it in a kid’s room, where clothes and toys are generally at maximum capacity. She prefers to fill at least part of the closet space with shelves, which can house color-coded bins so that everything has a place when playtime ends.

Wright has the same dedication to storage. Instead of open nightstands, she brings in pieces with drawers; when buying an ottoman, it’s always a storage ottoman; if the room doesn’t have space for traditional shelving, she opts for floating shelves.

“Every piece of furniture I try to make pull double duty,” she says.

NOW FOR THE FUN PART 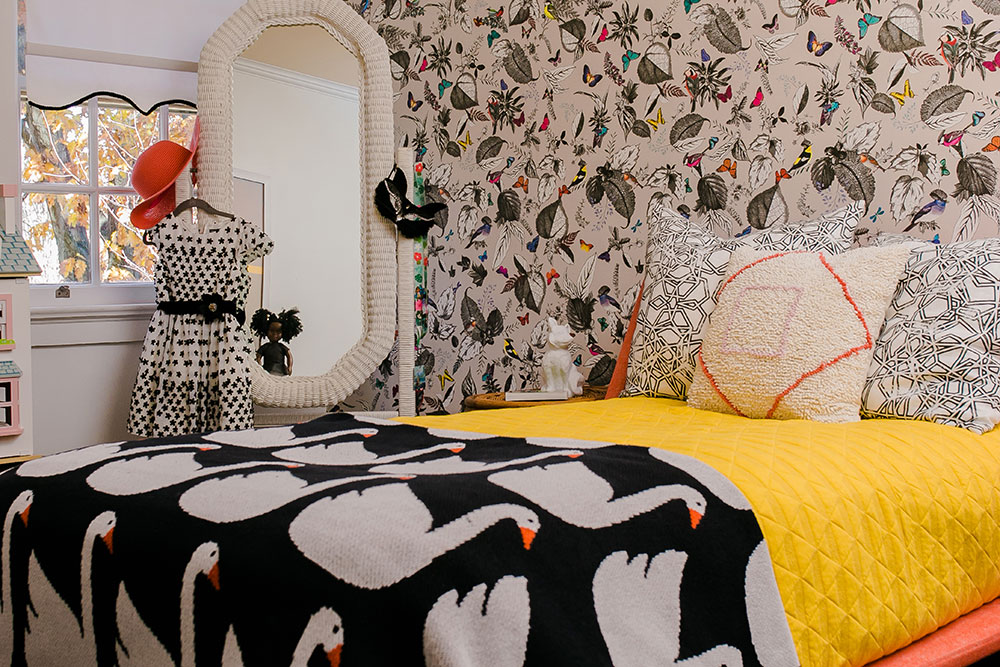 WALLPAPER IS AN EASY WAY TO ADD PERSONALITY TO A ROOM, LIKE IN THIS ONE BLACK CHERRY DESIGNER STAN ADAMIK CREATED FOR HIS DAUGHTER.

When kids aren’t happy with the way their room looks, they tend to take matters into their own hands, hanging their favorite pictures, posters and knickknacks using a questionable array of hardware, including tape, tacks and staples.

So, for years, Wentz has been using a creative workaround that allows kids to be the designers of their own rooms without breaking the budget or ruining the drywall. She covers one wall, floor to ceiling, in cork. Then she covers the cork in wallpaper. Updating decor becomes as easy as grabbing a new pushpin and can be altered on a whim.

Her 7-year-old daughter’s wall is currently covered in homemade dream catchers. Her 16-year-old son recently swapped his swimming medals out for his lacrosse schedule and a list of potential colleges.

“They know it’s their space, and they can do whatever they want,” Wentz says.

“They’re a fun way to add a lot of personality, but it’s not so permanent,” she says.

She sells her own line of temporary wallpaper, stamped with original designs, on her website in kid-friendly motifs such as palm trees, stripes, flowers and scalloped fish scales.

Swapping out pictures and photos in existing frames and adding fresh area rugs, throw pillows, comforters and curtains are also quick and thrifty ways to update on the fly. Wentz likes to use indoor/outdoor fabrics on curtains and comforters because they tend to be anti-fade and anti-stain or, in other words, practically kidproof.

Ultimately, Piasecki says, design is about creating an environment you want to live in, so kids should have a say in the space where they’re likely to spend the majority of their time.

“Get them involved,” she says. “Every other room in the house can be your taste; let their room be what they want.”