How to Eat Your Vegetables 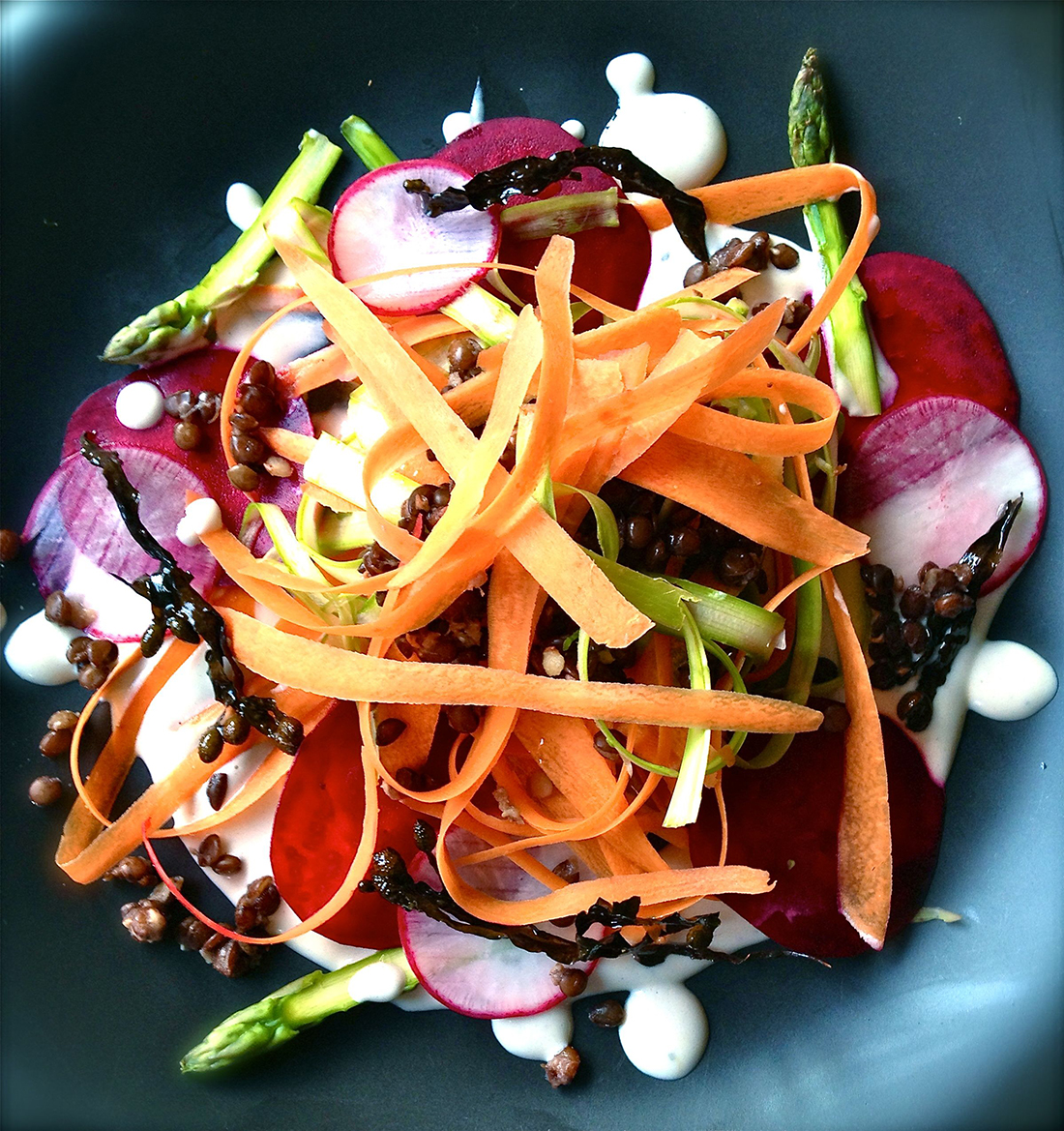 Here we are in a situation approaching fantasy … in agreeing to a rendezvous, the two accomplices lead us to an unexpected pleasure garden …The scent is ravishing… the duo throbs with life.

No, I’m not reading a “novel” with Fabio on the cover. Who needs Fabio and Christian Grey if you have Alain Passard? Those are just a few quotes from his book, The Art of Cooking with Vegetables. Clearly the man loves his vegetables. And he’s clearly French.

I first read about Alain Passard while on a plane to France in the early 2000s. It was an article featuring his kitchen garden long before that kind of thing became de rigueur. His Michelin three-star restaurant, L’Arpege, while not strictly vegetarian, was one of the first to focus its menu on vegetables. I’ve been following him ever since, which is actually a lot more difficult than following today’s “rock star” chefs.

Last year, to celebrate the 25th anniversary of L’Arpege, he released his book — a slim volume with 48 recipes accompanied with his own minimalist collages instead of photographs — eschewing the maximalist photography-recipe-tomes that are so popular today. Passard’s recipes spoke for themselves.

I’m only half exaggerating when I say that I read this book with the same heart-pounding anticipation that someone else might have reading The Hunger Games. Each recipe is simple, beautiful and surprising.

Pink grapefruit and peas. Beets with lavender and blackberries. Bananas with curry and sage. He describes his book as an “homage to vegetables,” and it is. In the introductory paragraphs to each of the 48 recipes, there is no irony in the unabashed romanticism of Passard describing the ingredients and the sensual flavors their combination creates.

I love this book.

I think it’s important to note that this book does not have any dogmatic theme outside of cooking with the seasons. In other words, it doesn’t call itself a “vegetarian cookbook.” Even though all the recipes qualify for that categorization.

The –ism is not what's important. The vegetables are.

I don’t discount the utility of meat analogues or (less so) cheese doppelgangers, but their prevalence often overwhelms “vegetarian/vegan” cooking, which misses the point entirely in my book. 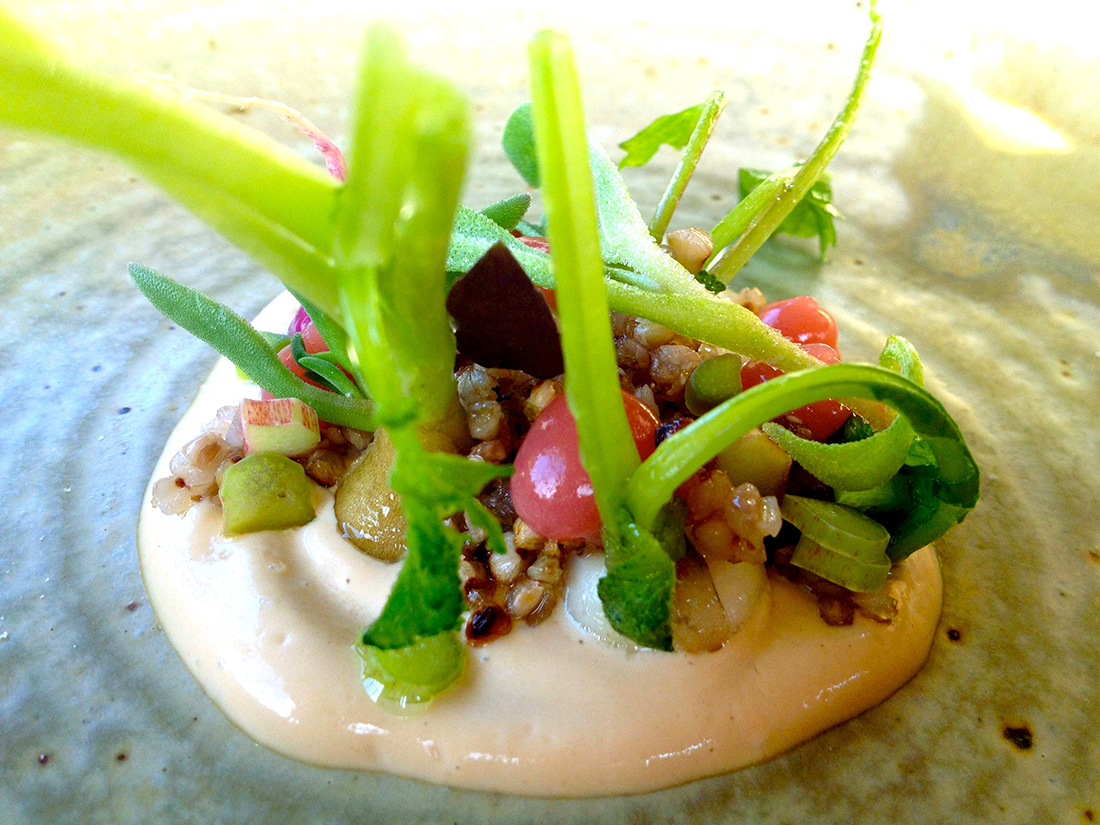 This brings me to my dinner on Monday night at chef Kevin Sousa’s once-a-month vegetarian table at Harvard & Highland. Alternatively, I like to call it The Vegetable Table, because labels so often elicit bias and dismissal, and I would love for non-vegetarians to experience vegetables like this – to open their horizons to possibilities they haven’t imagined.

The six beautiful vegetable courses I had certainly surpass any diet qualification. Vegetables not as an afterthought or an accent, but as the star.

The first course was a salad of baby radishes, baby rhubarb and buckwheat with a cashew vinaigrette. It was the perfect palate teaser. The velvety tart cashew dressing was a great counterpoint to the crispness of the baby vegetables. I loved it so much I decided to try it at home. The recipe below, while naturally not as good as Sousa’s, is a pretty wonderful approximation. 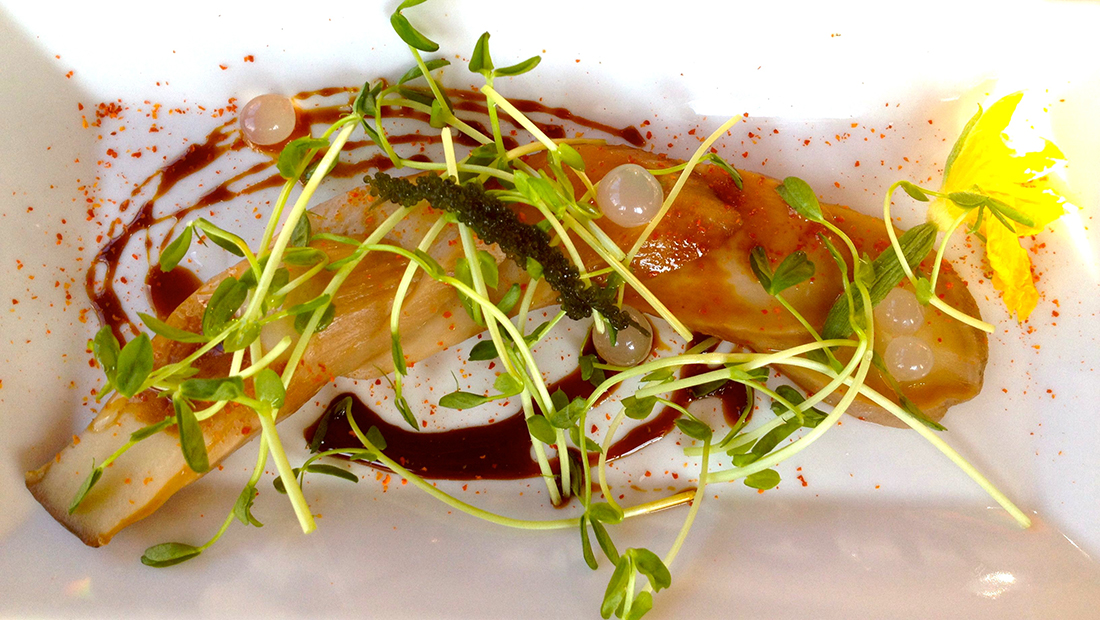 The second course was a “sashimi” of king trumpet mushrooms poached in dashi made with konbu, with a soy-wasabi sauce and dusted with my favorite hot pepper blend, ichimi togarashi. With lychee pearls and seaweed popping, each sweet, spicy, salty, umami-filled bite of the mushrooms was perfect. This was my favorite course, and I wished there was more. 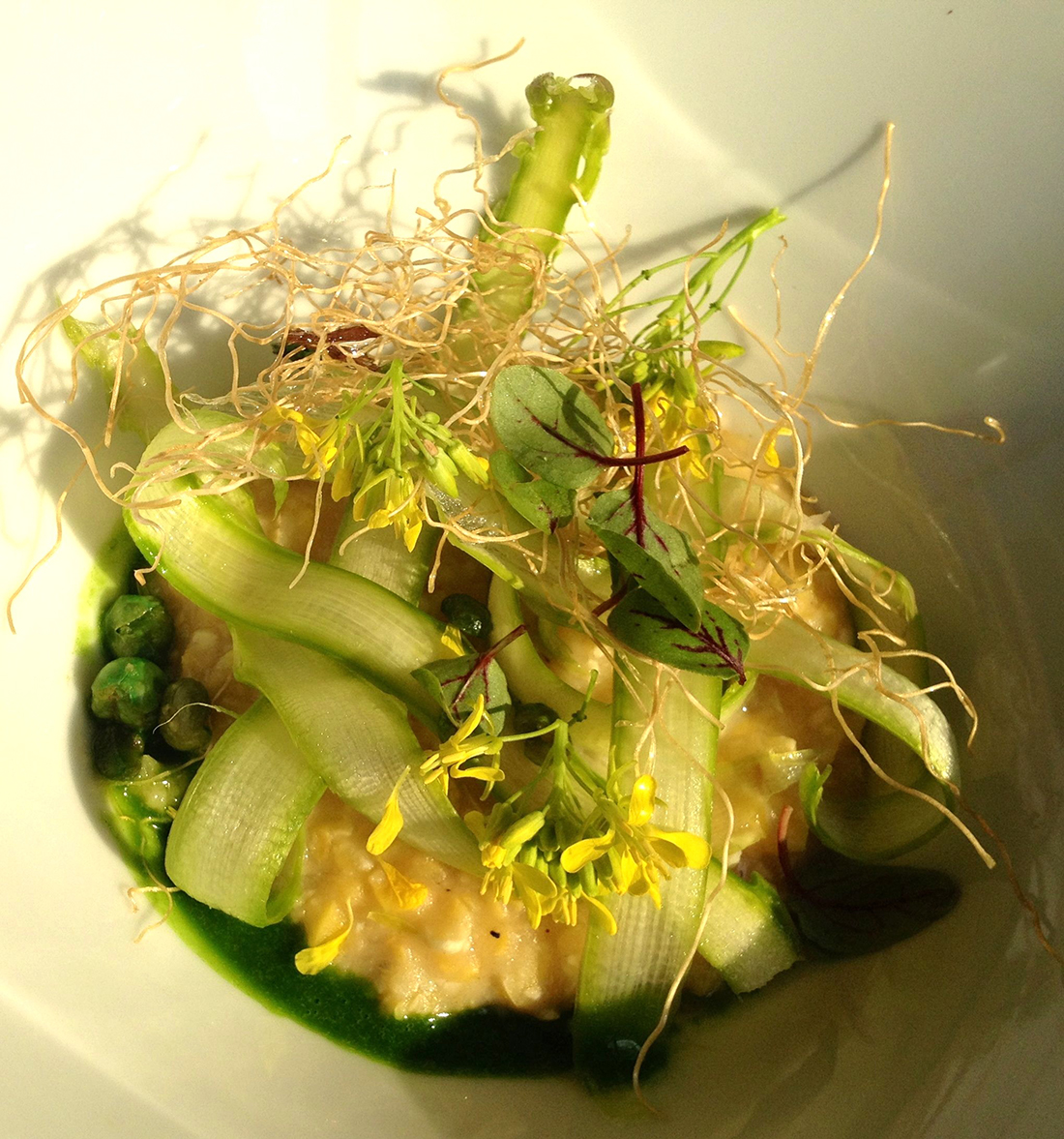 The third course was a polenta made with fermented hominy cooked in oat milk and topped with ribbons of asparagus, peas, broccoli raab flowers and arugula puree. Creamy, sweet, bitter, crunchy — the tangy and creamy polenta paired amazingly with the slightly astringent arugula puree and the crunch of the vegetables.

The fourth course was tofu en papillote with morel, fava beans and ramps, with a lemony sauce soubise that you could never tell was made with soy milk. Finished table-side, the creamy French-ification of tofu was decadent.

There were two dessert courses featuring two ingredients I love: avocado and coconut. 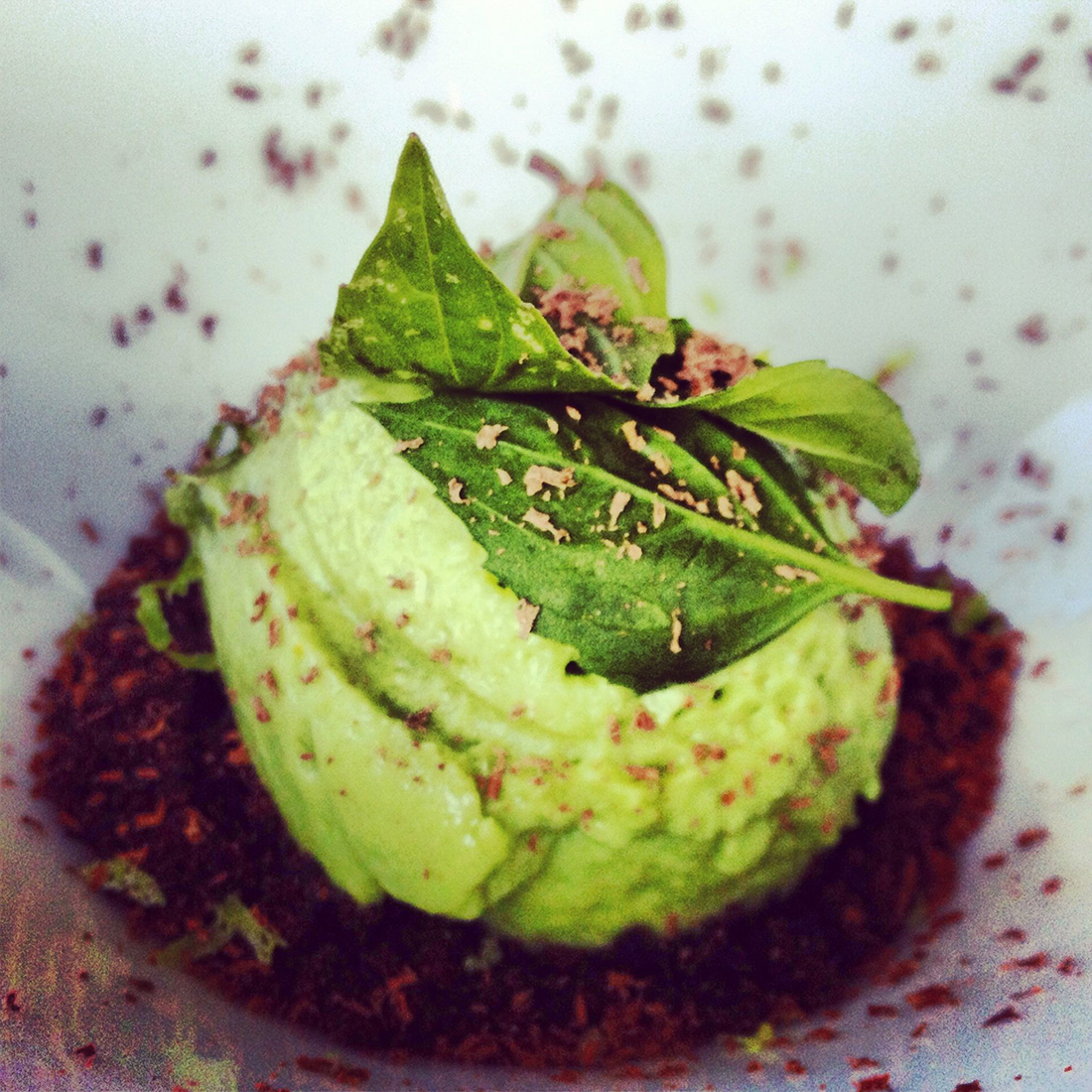 The first dessert was an avocado ice cream thickened with agar-agar over crumbled chocolate cookies. I loved this. I grew up with avocado traditionally prepared as a sweet. Dessert at home was often cubed avocadoes with cold milk and sugar. Avocado ice cream is a standard treat and I’ve missed it so much. This dish brought me home.

The second dessert did so as well – a silky banana confection that was a cross between pudding and mousse enrobed in a veil of coconut tapioca puree with a hint of chicory.

Each course was intelligent, artful and pleasurable.

In all their glory, we dined on vegetables. Not “vegetarian food.” As it should be. 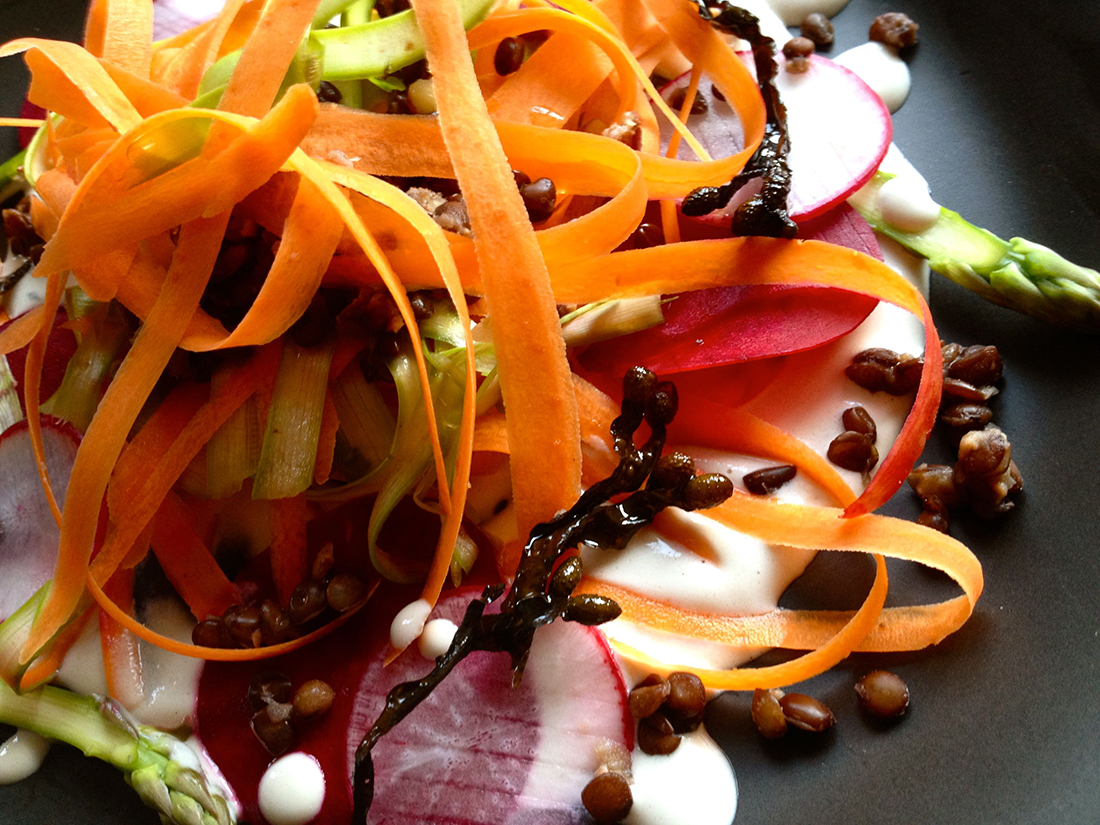 Place everything in a blender and blend until smooth. You must blend it until the consistency is not grainy.

I served this with ribbons of carrots and asparagus, beets and radishes sliced thin, plus French lentils and crisp fried sea oak (a type of sea vegetable). This is a wonderful dressing to serve with hearty vegetables that will hold up to the creaminess. It will also pair well tossed with romaine.