How the Pirates Made a City Believe

‘There’s a huge difference between rooting for a team and believing in it.’ 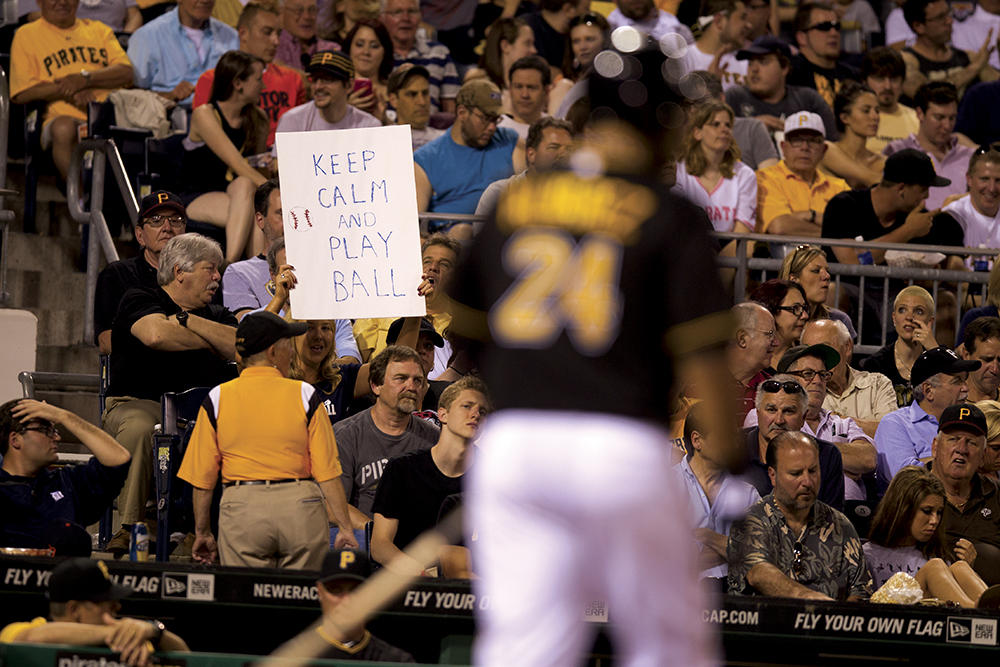 Baseball, now more than ever, is played by the season, and from the beginning of the winter meetings, every season is uncertain. Do we have enough pitching? Will our big free agents earn their money? The beauty of the 162-game schedule is that eventually every question will be answered.

For the Pirates, for nearly 20 seasons, those questions were moot. Who really believed we were one live arm away from contending with the Reds and Cards? We all remember the bad old days of 2010, when we lost 105 games and fans righteously boycotted the team. Management’s talent evaluation was awful (Brad Lincoln and Jeff Clement will save us!), and it refused to spend money while pocketing the league’s revenue-sharing windfall. I recall losing to the Brewers on Earth Day, 20-0, and walking out of the park wondering if what I’d seen had really happened. Irate Fan, one clever shirt read and we all knew how it felt.

When I say “all,” I mean the 1,000 fans who showed up for a weeknight game in April against the Cubs back then. Make that 500 — because at least half of those were Cubs fans making the road trip to snatch up easy tickets. We weren’t diehards because we were already dead, conditioned to expect the worst. We’d come to dread the call to the bullpen, the wailing siren and flashing ambulance lights that announced washed-up closer Octavio Dotel. After one game, I was dragging myself back over the Clemente Bridge, glumly lost in thought, when my wife had to remind me we’d just won.

There’s a huge difference between rooting for a team and believing in it. We rooted for the bad old Pirates because they were ours and because every time they took the field, they were underdogs. We weren’t dumb enough to think Ronny Cedeno and a lineup of triple-A players getting paid the league minimum were a real team. Management wrote off those seasons, paying themselves and socking away draft picks while the fans suffered.

Those seasons were the price we paid for 2013. Being dead last in 2010 gave us Gerrit Cole, and the money management saved let us pay Russell Martin and Francisco Liriano, two free agents who came up huge. Young bloods Starling Marte and Jeff Locke had brilliant first halves, as did untested closer Jason Grilli and retread set-up man Mark Melancon. Finally, after shelling out $80 million, we had enough quality players to complement the core of the 2011 and 2012 clubs that thrilled us in mid-season — Cutch, A.J., Pedro and Neil Walker.

Oh, there were disappointments — J-Mac was awful, Wandy was hurt again, Barmes hit under .200 much of the year — but in 2013 someone always stepped up. Early on, 25th man Jeanmar Gomez came through, and when Locke tanked, Charlie Morton came back strong. Jordy Mercer spelled Barmes at short and had some huge hits. Travis Snider came through with crazy walk-offs. Late-August trade acquisition Marlon Byrd solidified the middle of the lineup, while Justin Morneau contributed with his glove. When Marte hurt his hand, Jose Tabata came in and raked. For once Cutch and A.J. didn’t have to carry the whole load. As the wins piled up, we began to realize this team wasn’t going to fade.

Now instead of fearing the worst, we had come to expect the best. We would clinch against the Cubs with a late home run from Marte and Morneau’s wacky relay to nail a runner at home. We would sweep the hated Reds that last weekend to get the Wild Card game here at PNC, and serenade Johnny Cueto so he would drop the ball and then give up that dinger to Marlon Byrd. We would humiliate the Reds so badly they would finally fire Dusty Baker, whose pitchers loved to throw at Cutch. In Game 3 of the NLDS, as we were beating the Cards, in the stands we turned to one another, wide-eyed, to prove this was all actually happening. It was. It did.

For the whole summer and well into October, as the Steelers stumbled, the Pirates owned the city. They may still. When I logged onto their presale and tried to get tickets for Opening Day, all they had was standing room. And that’s good. There’s room on the bandwagon for everyone. But don’t just come for Opening Day. I want to see you at those weeknight games in April. We’ll tell those Cubs fans where they can go.

Nationally acclaimed author and Pirates fan Stewart O'Nan grew up playing all kinds of ball on the field behind Linden School in Point Breeze. He and his brother John went to the last games at Forbes Field and the first at Three Rivers Stadium. With Stephen King, he co-wrote “Faithful: Two Diehard Boston Red Sox Fans Chronicle the Historic 2004 Season.” A resident of suburban Pittsburgh, he had the pleasure of being at both PNC Park for the Pirates' playoff games and at Fenway for this year’s World Series clincher.