How Pittsburgh's Authors and Small Presses are Flourishing

While some fear what the future brings for books, it’s plainly evident that by embracing new capabilities, local writers have all the tools to succeed. 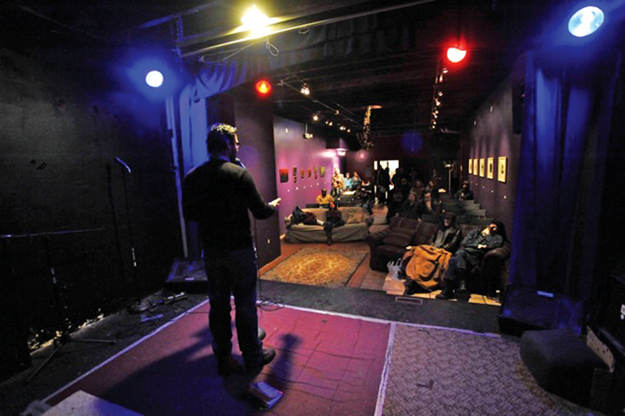 A writer recites excerpts of his work at ModernFormations Gallery. Photo by Jim Judkis.

Building a community through touring is important; a community of artists and small presses is important,” Jerome Crooks declares before shot-gunning a cheeseburger in the Midway Travel Plaza parking lot. Crooks and fellow poet Jason Baldinger have embarked on a small reading tour to promote The Whiskey Rebellion, a collection of poetry the pair co-wrote. In September, they read on stages and in bookshop basements in Baltimore, Washington D.C., Philadelphia and Brooklyn.

Crooks is not the only one in Pittsburgh’s small-press community with a sanguine outlook on the future of books. Daniel McCloskey, who runs Cyberpunk Apocalypse, a writers collective and publishing concern, sees the new technology of e-readers and e-zines as the logical evolution of books as we know them.

“Whether it was the advent of the Gutenberg press or the Xerox machine, technology that allows cheaper printing has always meant a literary revolution is on the horizon. Already I’ve seen what could be the beginnings of a renaissance. Steampunk Tales was originally published only to iPhone and is an example of a fiction rag that would not exist without e-reader technology.”

More and more local writers and publishers are incorporating new technology into the publishing and promotion of their books. Justin Hopper, author of Public Record, which incorporated an iPhone app as an extension of the reader’s experience of the poems, sees the new technology not as destroyer but as a generator for the local scene.

“I feel as though I hear more about local literary happenings and publications now than I ever did before. I think it’s a part of a revitalization to the public face of the literary community through social media and a renewed sense of importance. There seems to be a confidence level amongst local publishers, writers, and readers that perhaps wasn’t there before. Through Facebook, Twitter [and other e-media platforms], local writers and publishers are able to directly get the word out about publications and events.”

Margaret Bashaar, editor of Hyacinth Girl Press, asserts, “The Internet allows me to reach people much more easily than I could have even 10 years ago. I think the problem is that we’re having trouble finding a balance. People have started using the Internet heavily, and all of a sudden everyone, is crying that it’s the end of publishing on paper. That’s just not the case. It’s the end of only publishing on paper.”

Publishing e-zines and poetry blogs certainly has its advantages over traditional magazine publishing. Tracy Certo of local mainstay Pop City points out, “If we make a mistake, there’s a quick fix. We’re relatively inexpensive to produce, easy to access and we come up in a lot of Internet searches.” However, she says there’s a downside: “the lack of visibility around town. You see newspapers and magazines when they hit the stands,” which isn’t possible online.

Along with the new technology comes new methods of writing as well as publishing. Much like traditional forms such as haiku and sonnets which are limited to specific syllable counts, Jason Baldinger believes “things like poems on Twitter even create a new form when the poet is limited to a certain number of characters.”

We are experiencing something of a renewal in the local literary community. While the chain stores that facilitated the demise of indie bookshops are now disappearing, the landscape is opening for the return of small shops such as The Copacetic Comics Co., which also stocks fiction, nonfiction and poetry as well as comics; and The Big Idea, which specializes in political publications and zines.

Annual events such as SPF (Pittsburgh’s small press festival), the Pittsburgh Zine Fair, and PIX (the Pittsburgh Indy Comics Expo) all point to the rejuvenation of Pittsburgh book culture.

As Jerome Crooks says, “The community has to come together to promote itself.” If the larger structures of the publishing industry are shifting, and in some cases crumbling, then it’s up to our local wordslingers to band together and promote Pittsburgh as a vibrant literary scene. Crooks and Baldinger’s small tour, the first of many (they hope), is meant to promote not only their book, but also Pittsburgh itself.

They made use of Facebook to book and promote the tour, and have plans to release an iTunes and Kindle version of Whiskey Rebellion. They also have a trunk full of the book itself, ready put directly into the hands of eager new readers.

MORE FROM THOSE INVOLVED WITH PITTSBURGH'S LITERARY ARTS:

Daniel McCloskey, Cyberpunk Apocalypse: The Cyberpunk Apocalypse’s role in the Pittsburgh literary scene is always developing. We try to provide a venue for writers to make connections with other writers, a contact for out of town writers, and a place for writers to work. By housing writers together, and having monthly show-and-tell events we try to get everyone to peer pressure one another into working harder, being more inventive, and making better work. The Zine of the Month Club is our newest addition to the project. It’s designed as another way to encourage out put by writers we respect and want to support. It’s only been going on a few months now, but we have over 60 subscribers. The audience is diverse — some are writers or comic artists that just like to see what other people are up to. Some are supporters of the Cyberpunk Apocalypse, and some are the same kind of people that might subscribe to McSweeneys or other literary publications and are curious to see what this project develops into. We chose to use Kickstarter because it provided a convenient advertising package that we were having trouble providing on our own. The experience has been good.

Margaret Bashaar – Hyacinth Girl Press:  I love the Internet — I’m on it all the time — but I genuinely do not believe that it is the ideal space for poetry. There are online journals that are doing amazing things using the strengths of computers and online publishing (Whale Sound, Goblin Fruit, and Menacing Hedge come to mind) and I truly admire publications that use the internet in an innovative way, but it is my firm belief that poetry belongs in a more physical space. Honestly, I also simply enjoy reading poetry on the page more than I ever will enjoy reading it on a screen, no matter how many bells and whistles a computer can throw my way. I also enjoy the artistry of book design. I love physically creating a book. Hell, I still use typewriters when I write. There is something to be said for the physical artifact, the visceral feel of a thing in your hands. Hyacinth Girl Press is a press, as I like to say, of “science and spirituality with a secondary focus on environmentalism”, and I genuinely do see poetry as a sort of magic.
Justin Hopper, Public Record and Jackdaw Shivers Press: The idea behind the tech aspect of Public Record was to find a way to spatialize writing; to make it site-specific and to create a per formative element that was outside the realm of the poetry reading. And, most importantly, it was to find a way to create writing that has the same kind of subtle permanence as the stories I was trying to tell: To have it linger in the atmosphere, rather than be tied to the presence of a performer, a piece of paper, or even an audience member. I don’t know that this kind of merging of old and new media will be any kind of norm – technology, on the whole, is too gadgety and ephemeral. But I do think that we’re heading into an interesting period when more writing will be experienced in ways specific to its subject matter: Like Simon Armitage and, separately, the sculptor Steve Dilworth, both of whom have created their poetry carved into the landscape; or Caroline Bergvall, whose writing is often experienced as sited art installations; or any number of writers whose work inhabits, and is often created via, an exclusively digital realm.
This article appears in the December 2011 issue of Pittsburgh Magazine.
Categories: Arts & Entertainment