Filled with original details, the turreted home in Crafton has updated amenities. 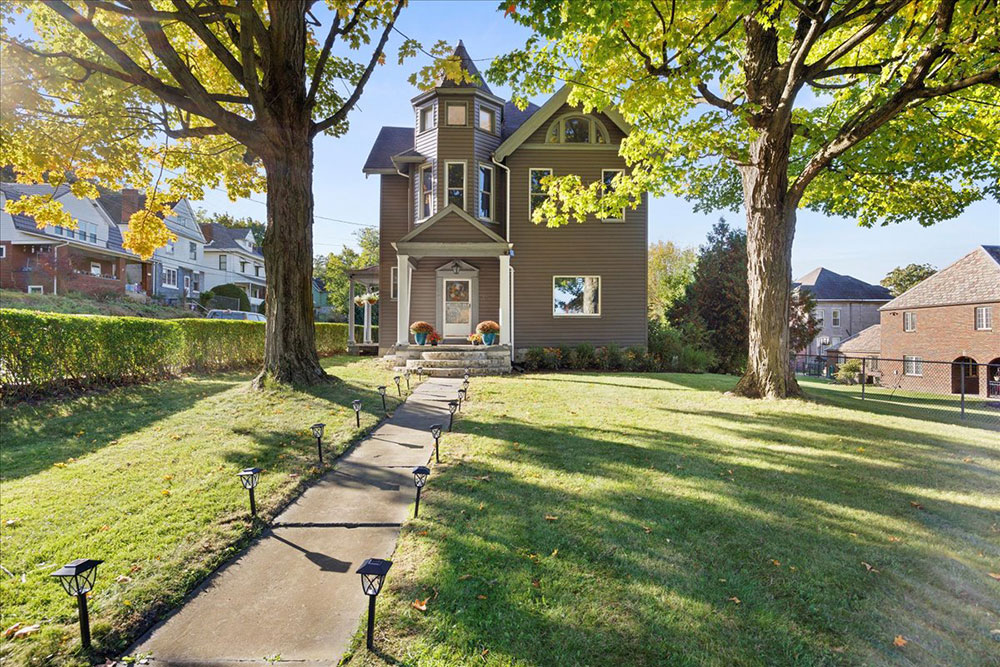 When they bought their century-old Victorican in Crafton four years ago, first-time home buyers Bre and Mike Cleary quickly learned the toils of home ownership after a plumbing issue forced them to completely remodel their bathroom not long after they moved in.

“We were a little naive,” Bre says. “We wanted a little fixer-upper. Little did we know how much we were going to get into. We were 26, 27 years old.”

Despite that, and in the years since, their fondness for 92 E. Steuben St. never wavered. The house was one of the first that the couple looked at; Bre immediately fell in love with it, and Mike was close behind her. 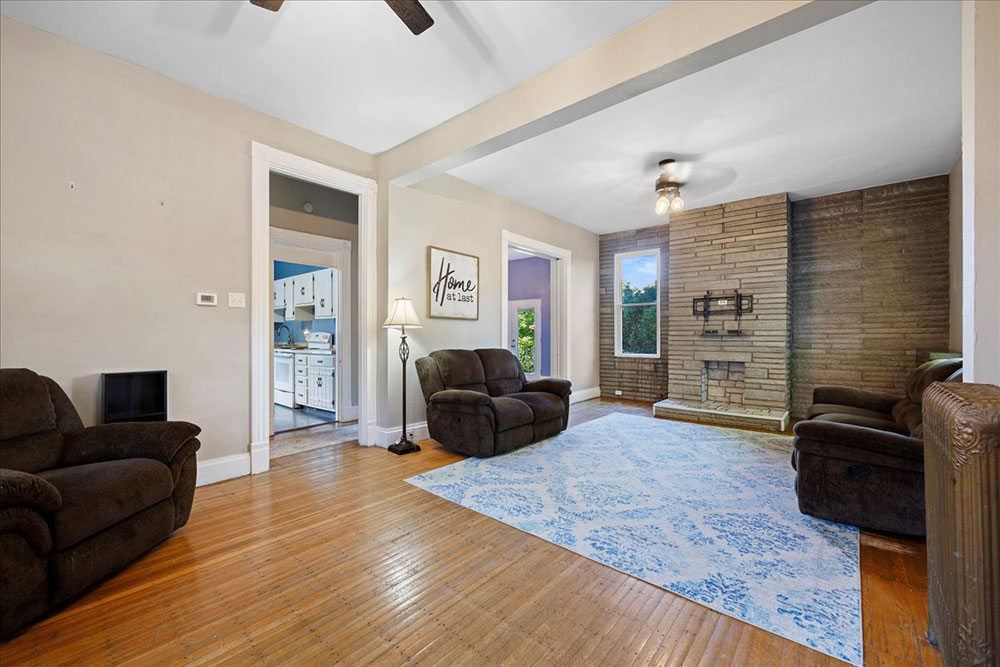 At the time, they had no idea how much their lives would change while living there. Beyond growing their family in the home, the couple says the projects they took on around the house inspired a career change for Mike.

“My husband worked in the oil fields when we bought the house. He is in the plumbing industry now,” Bre says. “It made him change his entire career path; he loves it and we learned a lot along the way.”

Having outgrown the location, the couple put the home on the market for $239,000 (MLS#1580560, Lu Ryan, Howard Hanna Real Estate, howardhanna.com). It went under agreement this week. 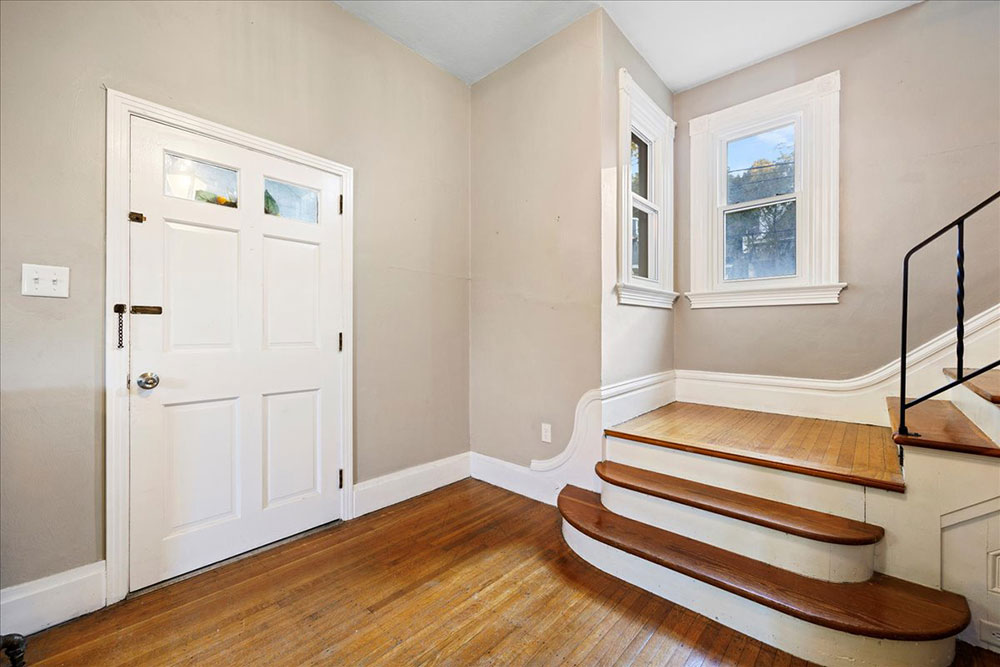 Built in 1893, the four-bedroom, two-full-bath home was one of the first in the community. It boasts high ceilings, an open floor plan that spans three stories and more than 2,800 square feet of living space. Sitting back from the sidewalk, the house has a long, lighted pathway that leads to a sweet porch that sits directly below an enchanting two-story turret.

Inside, original hardwood floors and high baseboards highlight the interior design. The 22-by-14 square-foot living room is flooded with natural light, thanks to several windows. It also features a distinctive fireplace covered with small ledgestone. 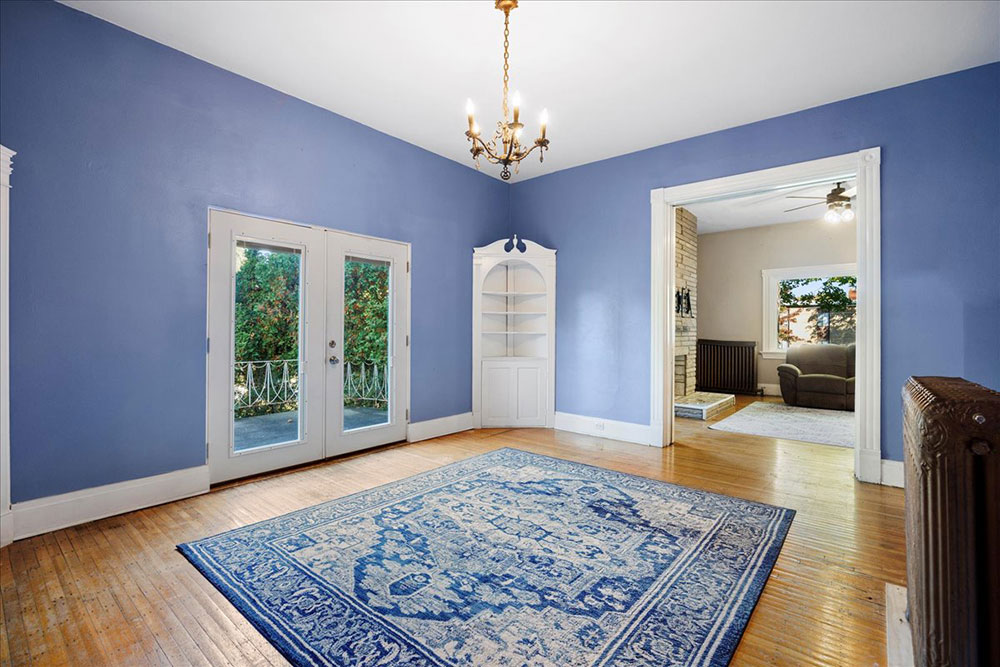 The dining room is painted a delightful shade of blue that Bre credits to the former owners.

“We hardly touched any of the paint in the house,” she says. “The dining room is Periwinkle Blue and we kept it because we loved it. It just fits with the home.”

The room also has a built-in corner cabinet on two ends, as well as original brass heating radiators that bring a charming touch to the room. A pair of double doors open to the side patio, where mature trees offer shade for outdoor entertaining and grilling. 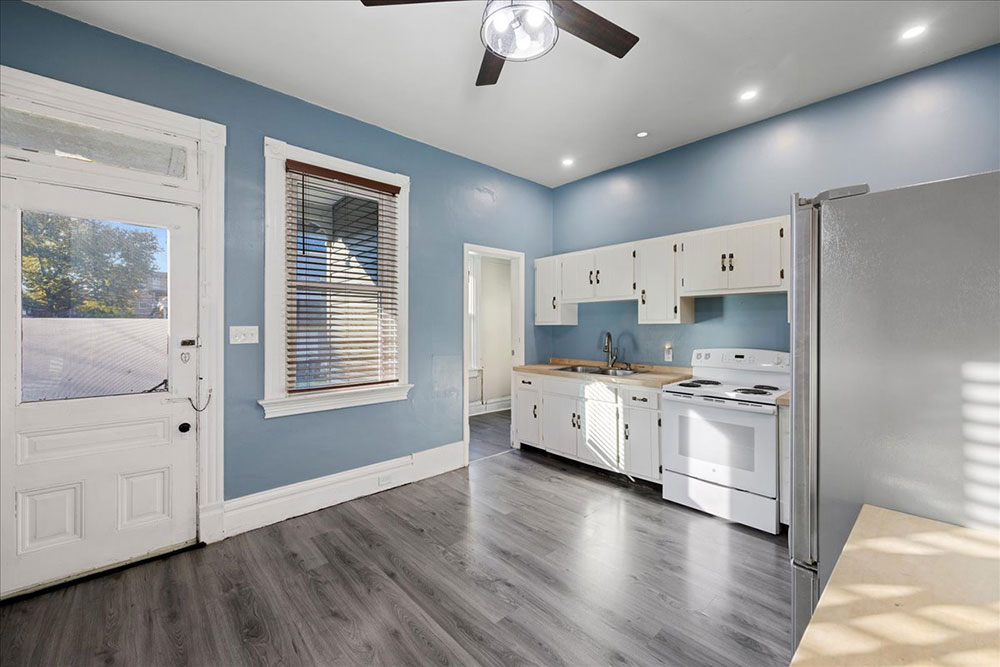 Featuring butcher-block countertops, the kitchen has a back staircase that leads to the second floor. The solid wood cabinets were painted white by a previous owner, Bre says. Luxury vinyl plank flooring gives the room an upgraded feel, as does a stainless steel French door-style refrigerator.

A full bathroom on the first floor features an alcove tub, single vanity and toilet. The tall wainscoting is painted a bright white.

On the second floor are four large bedrooms measuring from 14-by-11 to 18-by-13 square feet, respectively. The hallway’s original stained woodwork features a rosette detail complemented by tall baseboards. 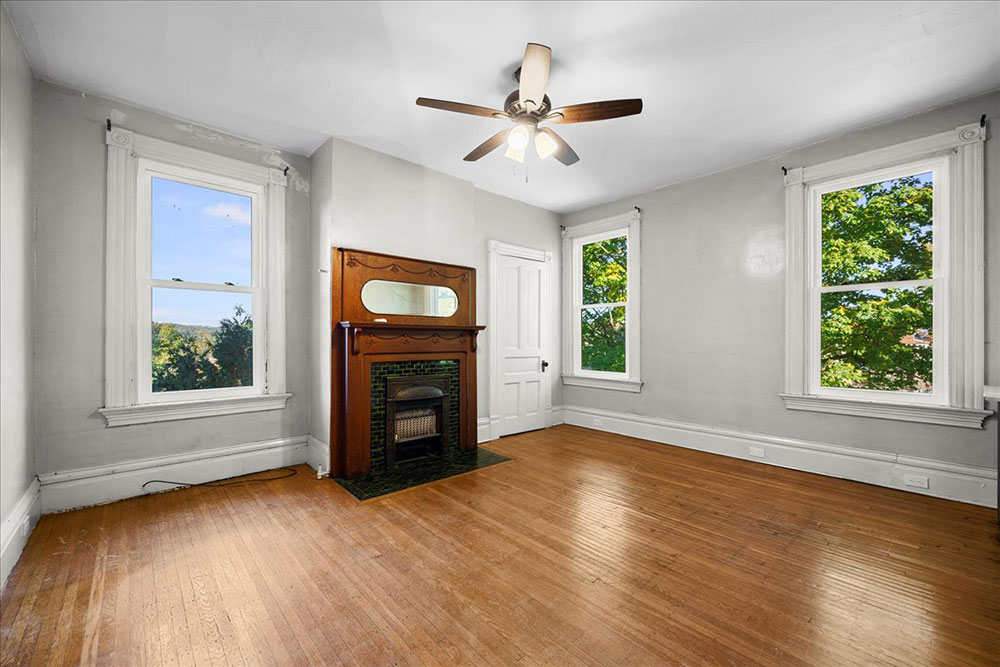 Each bedroom has the original oak floors. Featuring a trio of windows, the primary bedroom features a spectacular original gas fireplace with a carved oak façade and mirror mantel that dates to the late 1800s. The firebox is surrounded by green ceramic tile.

Their daughter’s room was another project the couple tackled.

“It used to have a drop ceiling,” Bre says. “We never touched it, but when we went to remodel the space we found that the original ceiling plaster was falling.” 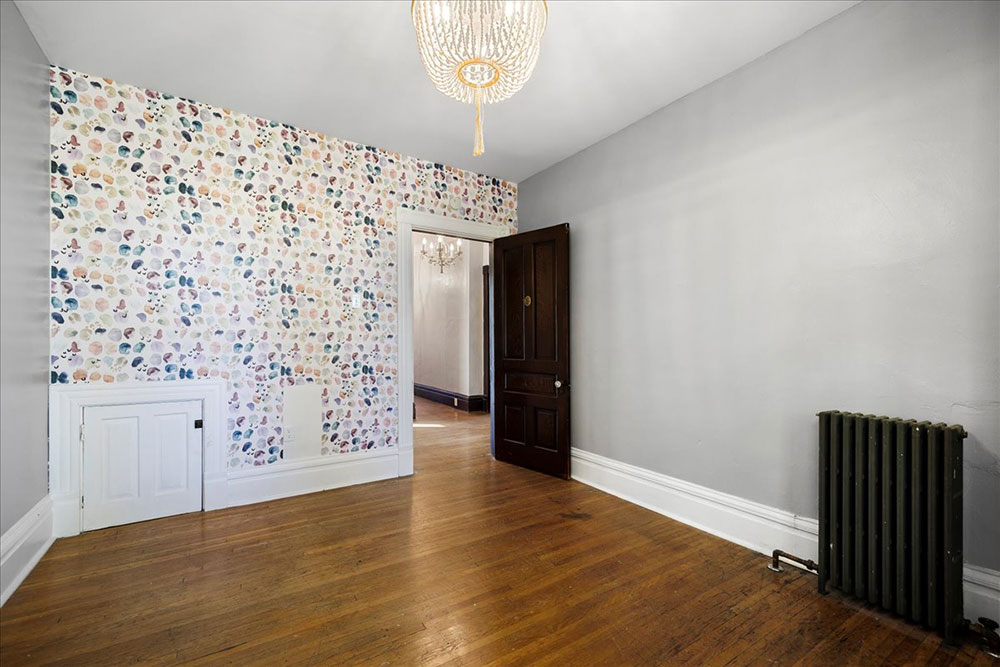 The couple removed and replaced the ceiling, and also installed a darling chandelier and charming wallpaper for their now 2-year-old daughter.

“She was the reason we did a lot of the improvements,” Bre says. “We pulled all of the knob-and-tube [wiring] out of the house when we found out we were expecting. We did not feel comfortable bringing a newborn home without a new service. It was a pretty big project.” 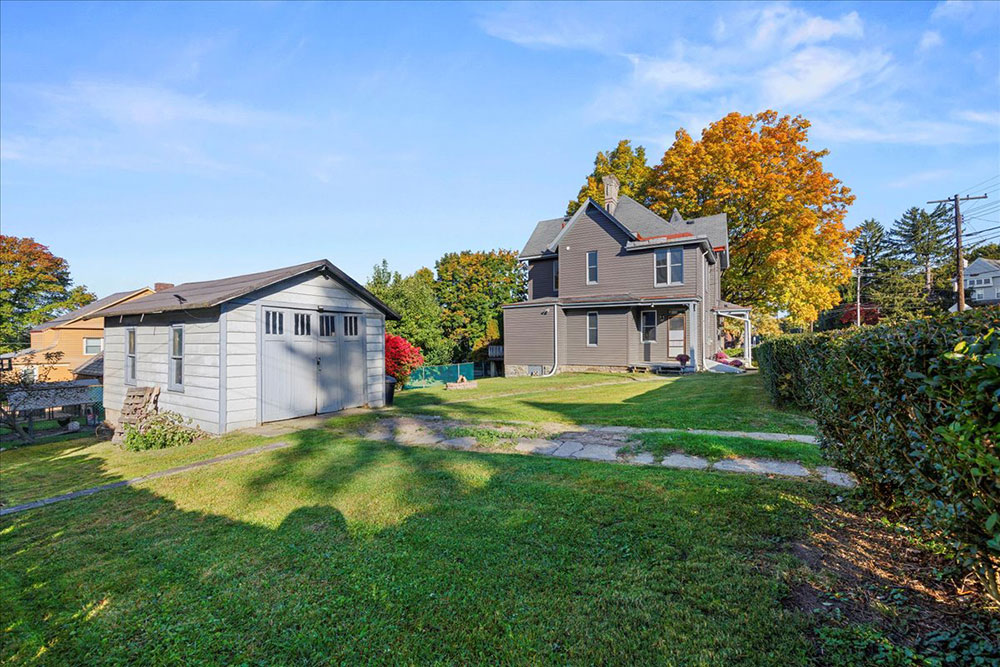 The second floor also features the bathroom the couple remodeled early in their tenure at the home. Along with new tile, it has a new vanity and fixtures.

The well-maintained backyard is flat and includes a separate garage with street access. There’s also a small planting bed and a firepit.

“We loved that house,” Mike says. “We hope the next owners will care for it as much as we did.”

About: Crafton (craftonborough.com)
Population: 5,770
Planes, Trains & Automobiles: A 20-minute commute to the airport.
Schools: Carlynton School District
Neighborhood: Full of rich housing stock rooted in history, Crafton was named after James S. Craft, an attorney who was originally granted the land. His son, Charles, sold parcels of the land, which was incorporated into a borough in 1892.