How Many Steps Would You Climb for Unique Wedding Photos?

Pittsburgh has 739 sets of public staircases, and you can get photographs on them that are just as breathtaking as the ones you could get on more iconic spots like Mt. Washington. 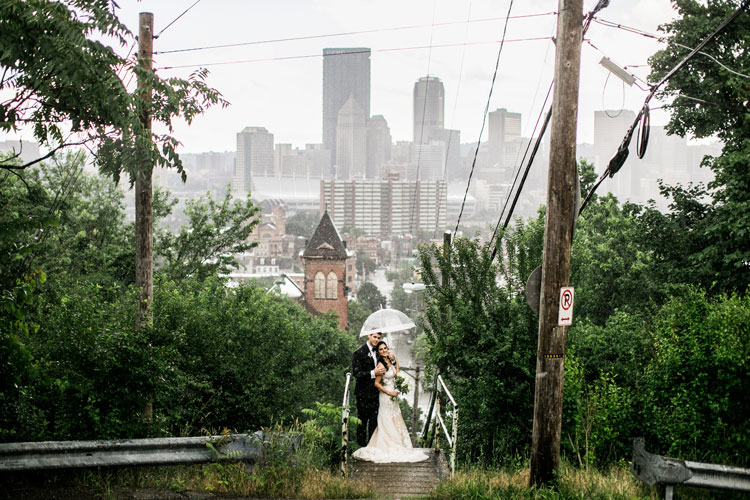 For couples who want to capture Pittsburgh in their wedding photos, there are a few favorite spots: the view from Mt. Washington or the Clemente Bridge.

But for those looking for a less polished, and often less frequented, part of the city that’s just as much a part of its fabric, one of the 739 sets of public city steps can serve as the perfect spot. 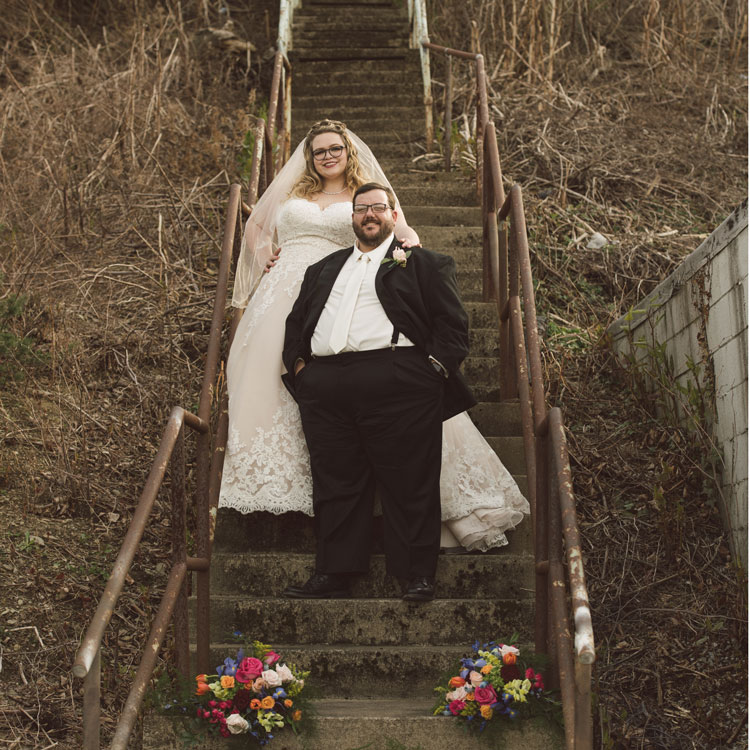 After Carrie Hillmar and William Krausmann’s wedding on April 21, 2018, at Sampson’s Mills Presbyterian Church in White Oak, they headed over to the South Side to take photos with their wedding party before their reception at J. Verno Studios.

Some city steps nearby spoke to them.

“We were getting pictures [near] the train track — there’s a unique view of Oakland there and the city so we walked there,” Carrie says, noting that photo with the skyline behind them ended up being her favorite from the day. 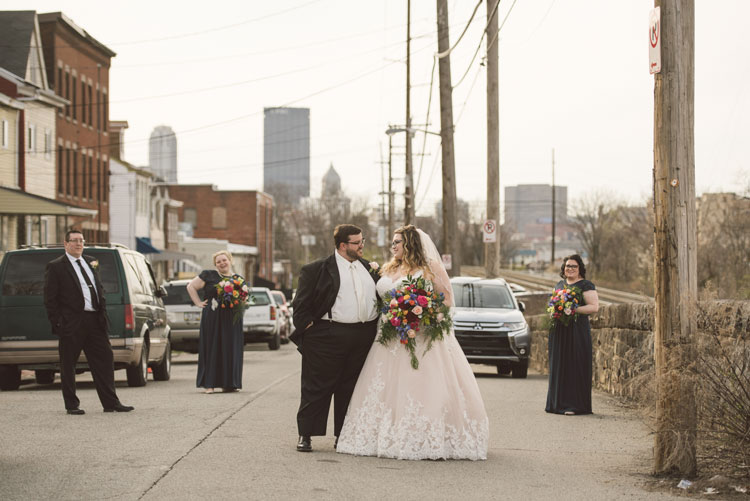 She noticed some city steps nearby, and she says the sort of “grittiness” of the unrefined steps combined with their formalwear and colorful flowers spoke to her.

“I liked the contrast there, and I felt like that was very much the vibe of a lot of the pictures,” she says; in addition to train tracks, the couple also posed in front of graffiti. “I feel like that’s very on trend. It’s not the same as when our parents got married.”

The couple is from Pittsburgh, and when they saw the city steps it seemed like a natural spot to take photos. 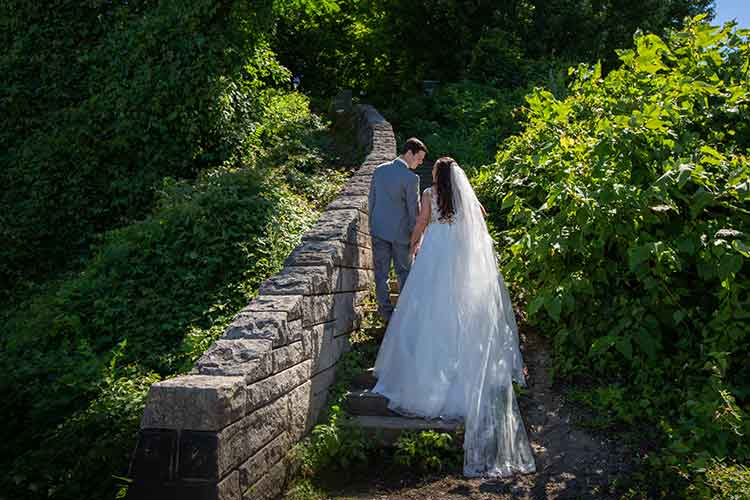 Kelsie Mozzoni and Daniel LaBarbera, who married on July 7, 2018, incorporated Pittsburgh throughout their wedding with an industrial theme.

Instead of black and gold, they used metallic colors throughout, with metal flower accents and wires incorporated into their centerpieces and bouquets. They even named their reception tables at the Heinz History Center after the city’s bridges. 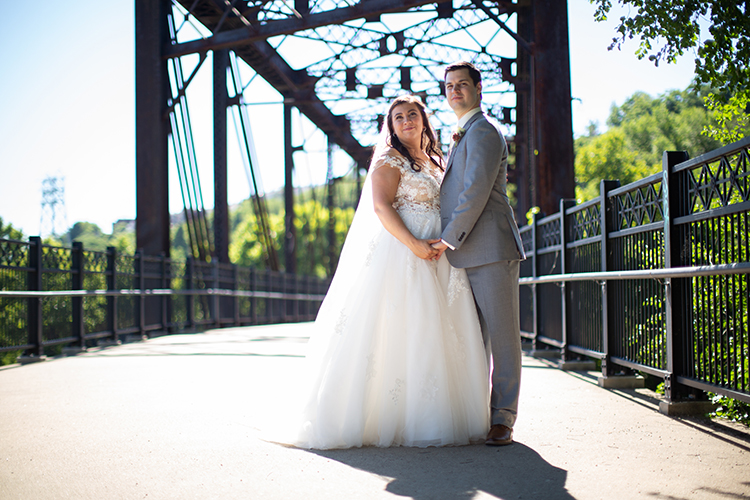 After their ceremony at Heinz Memorial Chapel, they took photos in Oakland then headed for a spot Kelsie had discovered on Pinterest and through Google searches of lesser known photo spots — Washington’s Landing. The couple took photos on stone steps surrounded by greenery and on a pedestrian bridge over the river.

“I think the landscape [of Washington’s Landing] is really unique, and it does a good job of really showing the steel industry and the fact that Pittsburgh is becoming more green,” Kelsie says. “It’s a place you can find a lot of different levels of scenery where you can find old and new Pittsburgh.” 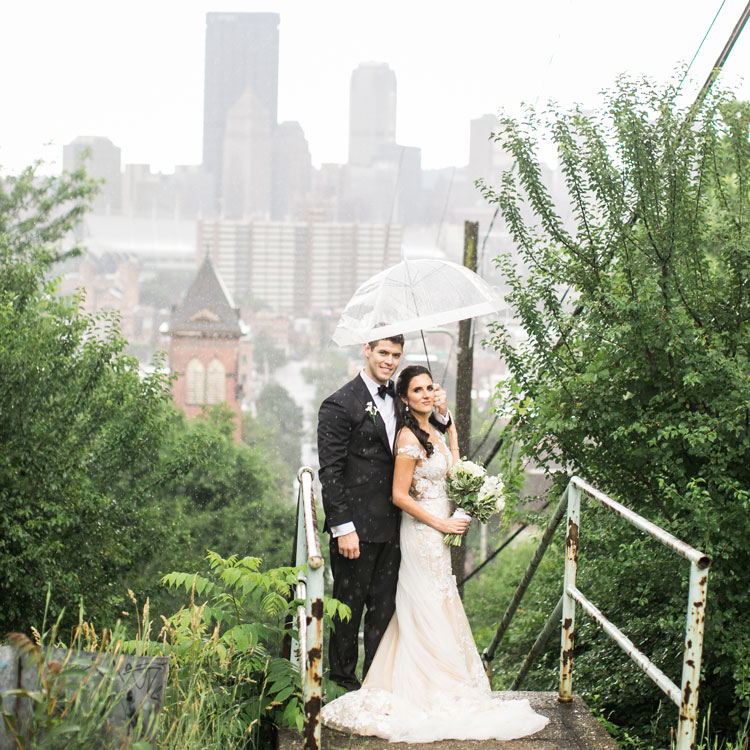 It was Amanda McGaughey and Jeremy Papp’s wedding photographer, Steven Dray, who pointed them toward a set of city steps on the North Side.

After their ceremony on June 23, 2018, at St. Peter Church on the North Side, the couple climbed to a spot Dray knew of.

“The North Side has so many little hidden places that are gems,” Amanda says. “It’s easy for people to say, ‘Let’s go to Mt. Washington, and let’s go here,’ but Steven does a really good job at finding things that are specific to you and finding the vibe you’re looking for, so it was awesome.” 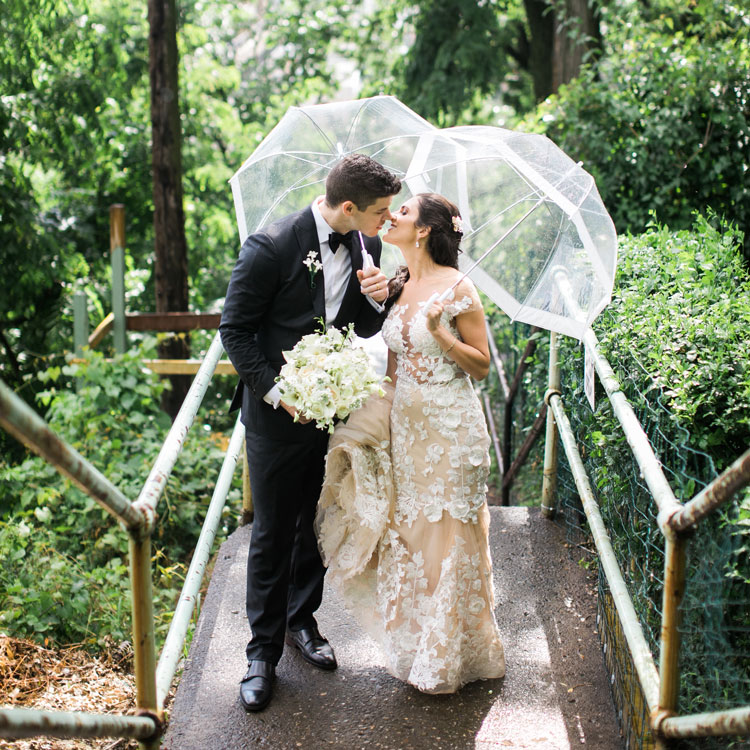 Amanda and Jeremy chose the Mattress Factory museum on the North Side for their reception because it is such a great spot to incorporate the city; you can even get photos inside an open area of the venue with the city skyline in the background.

Amanda says the city steps fit perfectly with what they wanted on their wedding day.

“It’s a different perspective of Pittsburgh you don’t necessarily see advertised or shown a lot,” she says. “It’s nice to see different views of the city, especially up on the high hill. It just has a great landscape.”