How CMU Tech is Driving NASA's Mission to Mars 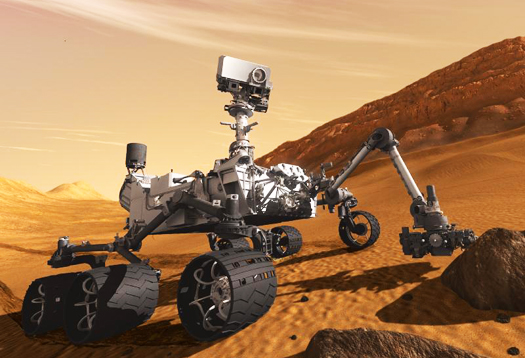 CMU SOFTWARE BEING UTILIZED BY CURIOSITY ROVER
One of the bigger, non-Olympic news stories of the last few weeks had little to do with other countries and everything to do with other planets, as NASA’s Curiosity rover landed on Mars. Its mission? To investigate the possibility of life on Earth’s red neighbor — and, thanks to software from Carnegie Mellon University, any extra-terrestrial life the rover may encounter will be subjected to some good old Pittsburgh driving.

Tony Stentz, director of the National Robotics Engineering Center at CMU, developed Field D, the software used by the rover to navigate the Martian surface. The software allows the rover to create maps of the terrain it encounters, calculate new courses and retrace its steps, if necessary. The system was originally developed in 2000, with previous versions utilized on the Mars rovers Spirit and Opportunity.

No word as to whether or not the rover started saving its parking spaces with chairs yet (or inexplicably slowing down when approaching tunnels).

RMU PROFESSOR EXPLORES USE OF NANOPARTICLES IN CANCER RESEARCH
Pittsburgh is already a city leading the way in medical innovation. Now, a new improvement in fighting disease may be coming to the Steel City and beyond, thanks to a method of cancer treatment explored by Robert Morris University professor Gavin Buxton.

Buxton’s method utilizes nanoparticles. By combining water-repellent particles with water-soluble particles in different ways, Buxton hopes to create more effective chemotherapy treatments. By concentrating the drug on cancerous cells and steering them away from healthy areas, Buxton hopes to drastically reduce the ill-effects that chemotherapy drugs have on patients.

Buxton and co-author Nigel Clarke of the University of Sheffield (UK) recently published their early findings and plan to further explore how nanoparticles can be used in new ways.

FORBES RECOGNIZES THREE LOCAL SCHOOLS
While Pittsburgh’s already known as a college town, here’s proof that some local schools measure up nationally: Forbes magazine’s annual America’s Best Colleges list included three of our urban schools in its lineup of 650 colleges — Carnegie Mellon University ranked at 69, the University of Pittsburgh came in at 265 and Duquesne University landed in 420. Additionally, Duquesne was recognized as a top research institution (No. 153 out of 266).

Forbes rates the schools based on such factors as student perspective, post-graduate success, four-year graduation rate and low levels of debt.

This article appears in the August 2012 issue of Great Minds.
Categories: Great Minds