How ’Bout Them Apples

Rich in history and flavor, apples are late-autumn’s long-enduring. 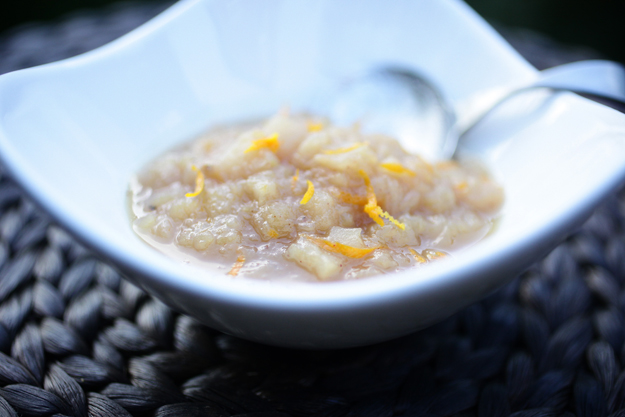 Despite having exotic variety names like Mutsu, Empire and Northern Spy, apples are a simple food. A perfectly sweet, crisp slice can hardly be improved upon—unless you’re in the mood for a spoonful of chunky peanut butter or wedge of sharp cheddar alongside it. Even when cooked, apples are at their best when combined with just a few ingredients.

The many varieties we enjoy today have been thousands of years in the making. The fruits have a peculiar tendency not to follow through to type: Plant a seed from a Granny Smith, and it will yield a tree that grows a different kind of apple. Grafting a particular apple tree onto rootstock is the only way to be certain what sort of fruiting tree will result. The Romans, who grew certain types of apples for flavor and texture, were the first group to successfully graft.

Today, there are more than 7,000 named varieties of apples—many of which were discovered by sheer serendipity. Seedling orchards are common in the United States, thanks, in part, to Johnny Appleseed (learn more about him in the sidebar). Several hundred new varieties best suited to the native environment originated here.

For example, the York Imperial, a processing apple that stores very well, was discovered in York, Pa., when a farmer noticed that kids were returning to his land in the cold months to dig up apples they’d filched at harvest and buried in the leaves. And all of the world’s Golden Delicious apples came from a tree planted in West Virginia.

In the 19th century, however, the apples in this region weren’t necessarily grown for eating or cooking: Pennsylvania had an apple yield of 10 million barrels during the 1890s, making it the top U.S. producer at the time. But most of the fruit was used to produce applejack, fermented apple juice that was one of the most popular beverages of the era.

Today, the Keystone State is still among the country’s top producers. So, this fall, enjoy the bounty by eating apples grown in our backyard.

Any Way You Slice It

Apple pie is a popular dessert pick for Thanksgiving, but cooking apples isn’t the only way to enjoy them. If you had no other reason to move to western Pennsylvania, consider the Stayman Winesap apple: Sweet and slightly tart, firm and juicy, it’s ideal for eating and is mainly grown in the mid-Atlantic states: Pennsylvania, West Virginia, Virginia and Maryland.

The harvesting season for Staymans begins in mid-October at many regional farms, including Trax Farms, Schramm’s Farm Market and Soergel Orchards. Visiting local farms allows you to taste a number of apples and discover your favorite. After all, it’s not just the Stayman Winesap that should inspire local apple-lovers to thank their lucky stars—it’s the diversity in nearby orchards, where more than a dozen delicious varieties are grown each year.

By buying locally grown produce, you’re supporting our farmers and a long tradition of apple growers here in western Pennsylvania. In fact, the apple trees here made history: John Chapman, aka Johnny Appleseed, got many of the apple seeds he spread far and wide in western Pennsylvania. He scored his seeds for free by pulling them from pomace—the apple seeds and skin left over after the pressing of juice—at local cider mills. Legend has it that, afterward, he left town by floating down the Ohio River with two canoes fastened together, one filled with apple seed, planting them wherever he stopped.

Inspired by the flavors of chutney, this sauce pairs well with grilled or roasted poultry—try it with leftover Thanksgiving turkey.

In a medium saucepan, combine the following ingredients: one-quarter cup white wine vinegar; one-quarter cup apple juice; three cups of peeled, cored and chopped tart cooking apples (like Granny Smith); one small yellow onion, halved and cut into two pieces; a 2-inch piece of ginger, peeled and halved lengthwise; one teaspoon grated orange peel; and one-eighth teaspoon each of cinnamon, nutmeg, white pepper and cardamom. Bring the mixture to a boil, reduce heat, cover and simmer for 30 minutes. Remove the pieces of onion and ginger and discard. Over low heat, add two tablespoons of brown sugar to the mixture and stir, uncovered, for several more minutes (until completely thickened). Allow the mixture to cool and store in an airtight container. Makes approximately one cup.