How a Slaughterhouse in Lawrenceville Became a Home —And a Dojo

After close to a year’s worth of construction, the historic Union Provision Building — recognizable for the sculpture of a star and a bird connected by a chain on its exterior — is now a living space, woodworking shop and home to Allegheny Aikido. 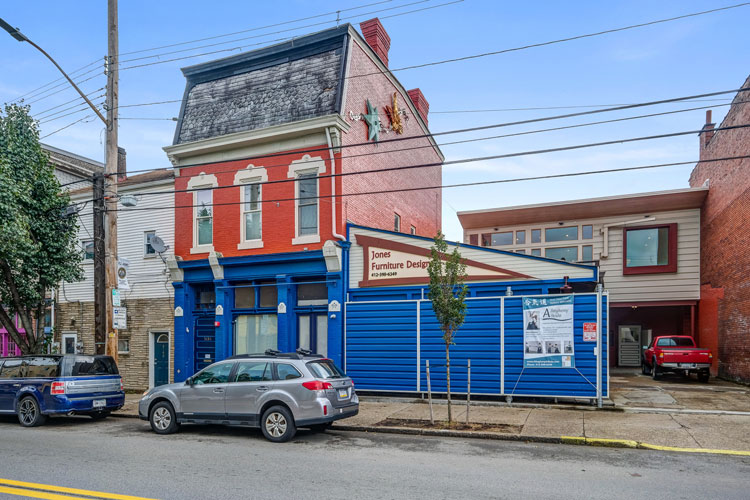 Along the 51st block of Butler Street in Lawrenceville is the Union Provision Building, easily recognizable for an exterior sculpture on the side of the building depicting a star and a bird connected by a silver chain.

In 1895, it housed a butcher shop and a slaughterhouse. Today, the building is a home, wood-working shop and an Aikido studio.

Garth Jones and his late business partner, Don Reed, originally bought the property in 2001 with plans to make into a woodworking shop and a small artist gallery.

While they made small changes here and there — including tearing out the old meat lockers and adding woodworking tools — the plan was never to do a big renovation project. Instead, the goal was to do enough to keep it standing.

“We had to do something to keep the building from falling down around out ears,” Jones recalls. 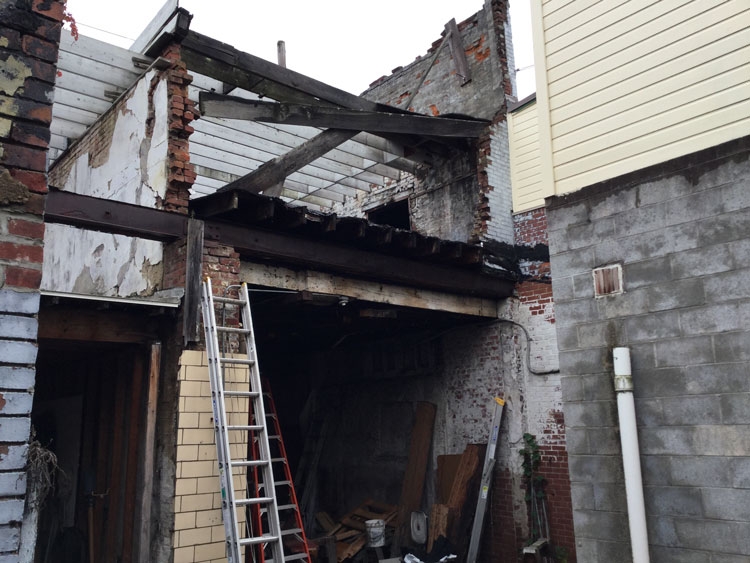 That all changed in 2015. At the time, Jones and his wife, Tara Meyer, were living in Squirrel Hill and also renting a space in the area to run Allegheny Aikido. They noticed things about their current home that weren’t going to change — such as the size of the kitchen — and started giving serious consideration to renovating the old slaughterhouse into a home and dojo.The building also is the home of Jones' longtime artisan furniture business, Jones Furniture Designs.

mossArchitects was hired to do “phase zero concept sketches, just to get a wild guess to see if we could even remotely afford it,” Jones says.

After the couple decided renovation was possible, mossArchitects closely oversaw the project's design for two years. Jones credits mossArchitects president Andrew Moss with making their dreams for the building a reality.

"He had the vision to see what could become of the old place and what stands now is the result of that vision,” he says.

The couple also hired Venetia-based Prime 1 Builders to do the construction work, which began in March 2017 and finished up 11 months later. Dan Meade, founder and president of Prime 1, says parts of the building were semi-dilapidated, which made the construction a challenge at times as portions of the century-old building crumbled while they worked.

"We literally had to tear down the top two floors of the refrigeration building and get down to the original first floor and then start from there," he says. "We were able to find good solid walls to build off of." 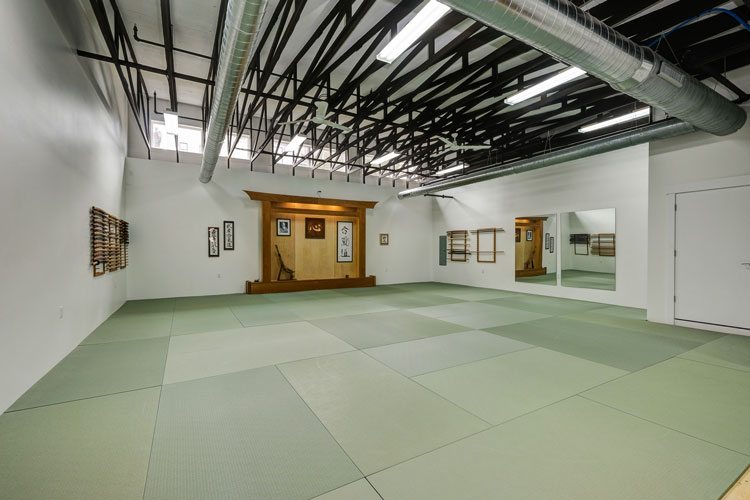 The couple made it their mission to preserve and refurbish what they could of the original three-story building while bringing it up to code by adding new HVAC and a sprinkler system. While they had hoped to preserve the original brick walls from the smoke house for the Aikido studio, they soon realized the crumbling bricks would need to be rebuilt. One of the few things salvaged from the old slaughterhouse were two heavy steel doors from the smokehouse, which now hang on an exterior wall between the entrance to the shop and the Aikido studio.

The old part of the house —once the slaughterhouse’s living quarters — still has its original floors, although they’re now painted an ocean-blue in the hallways and a fire-engine red in the guest room and Jones’s office space.

The red floors are a leftover from an artist who once rented the space. Jones and Meyer say they let him paint the floors and decided that if they didn’t like it, they would just paint over it when the artist left. Ultimately, the color stayed and later spread to other rooms in that portion of the house. 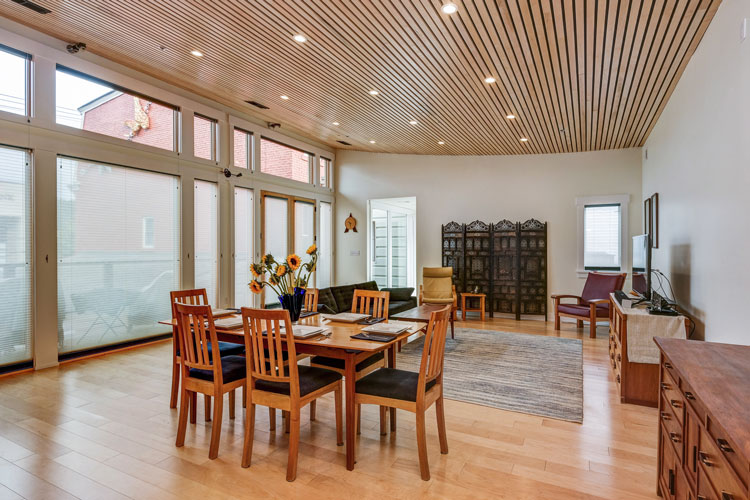 The space above the wood shop — where the couple make their home — also had to be almost completely redone. What used to be dead space and a small office for Jones was transformed into a more than 2,000-square-foot living area. 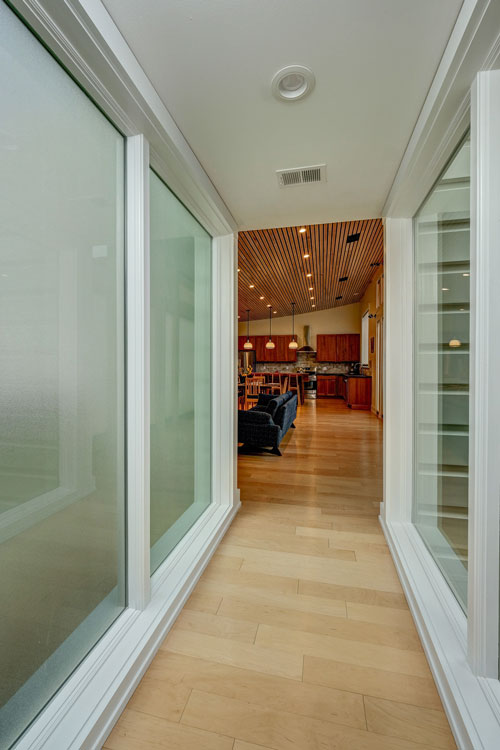 Another challenge was finding a way to join the old portion of the house with the new portion overtop of the woodshop. Prime 1 was able to connect the two structures with a glass-walled bridge, designed by mossArchitects, which also creates a dramatic entry to the second-floor home.

“It was an interesting and complicated puzzle,” Jones says.

Meade adds he enjoyed working with Jones on finding ways to blend the building's new contemporary interior with its historic origins.

"Working closely with the owner was probably the best part," he says. "He's a very enthusiastic guy." 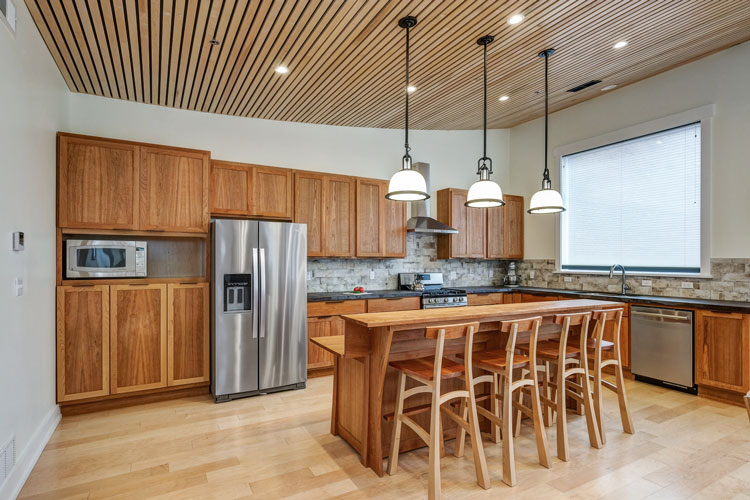 One of the home’s standout features is the curved ceiling in the open-concept living room and kitchen. Completing the space is furniture made by Jones himself in his professional studio, including the kitchen island, cabinets and television stand.

Because the living space is on the second level, the couple added an elevator for convenience sake. Their personal splurge, according to Jones, was an indoor hot tub. Located on the second floor in the remodeled home area, the hot tub is supported by the original steel beams of the slaughterhouse located directly below.

Although Lawrenceville is one of Pittsburgh’s trendiest neighborhoods, the couple says they don’t have much problem with noise or space. The building sits back 45 feet from the road, leaving plenty of room for a long driveway. There’s also a covered storage area that holds supplies for the shop, as well as a sailboat and a pair of kayaks built by Jones. 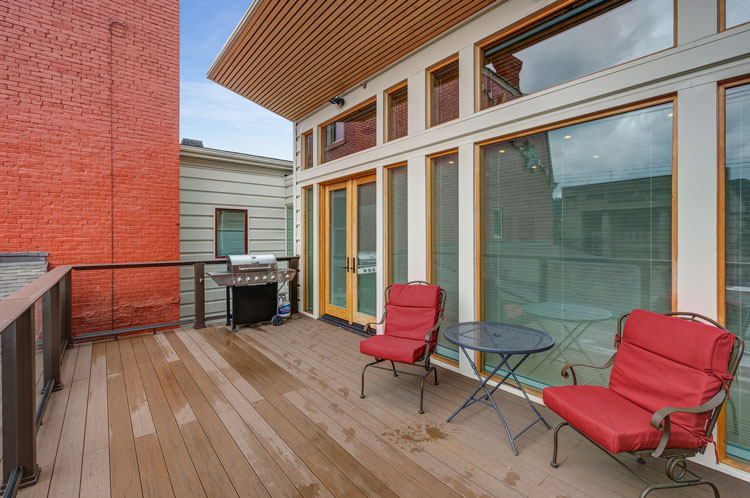 Overtop of the storage area is a deck overlooking Butler Street. Inside is a great room with a wall of floor-to-ceiling windows.

Like every renovation, once the big stuff is completed, there is always something else to work on, Jones says.

This article appears in the February 2019 issue of Nest.
Categories: Nest