How a President Turned Pittsburgh into a City of Pancakes

Recounting the Pittsburgh visits (and pancake preferences) of the former first family. 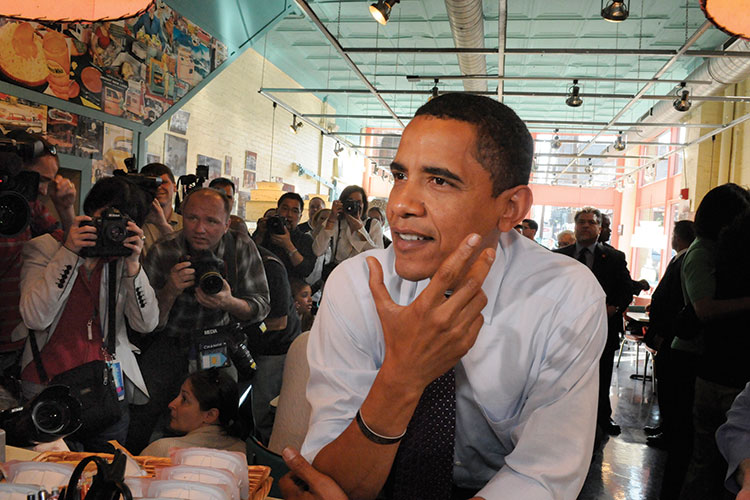 U.S. Presidents come and go, but it’s hard to predict what any of them will be remembered for most in western Pennsylvania.

Old No. 1, George Washington, passed through this part of the world several times before becoming President; the best story may be that of his first trip in 1753, when he fell off a raft into the freezing Allegheny River. Honest No. 16, Abe Lincoln, stopped in Pittsburgh only once, in 1861; for many years, the fact that the hotel bed he slept in had disappeared was the most intriguing aspect of the tale. (It was eventually found in South Park in 2006.)

Slim No. 44, Barack Obama, has been to Pittsburgh many times. In 2006, then-U.S. Sen. Obama came to Pittsburgh to offer support for Democrat Bob Casey Jr., who was running for the U.S. Senate against incumbent Republican Rick Santorum.

Since then, Obama has returned often: for campaign events, to kick off a six-day bus tour in March 2008, to talk about manufacturing and military families in nearby Washington, Pa. In 2008, he held a town hall meeting at the Community College of Beaver County in Monaca. He stopped in 2011 to visit the Carnegie Mellon University National Robotics Engineering Center in Lawrenceville. And in October, he came to be part of the White House Frontiers Conference on innovation, science and technology at Pitt and CMU.

But what do many people remember about Barack and Michelle Obama in Pittsburgh? That they loved the big, thin pancakes at Pamela’s Diner.

It started on April 22, 2008, the day of the Pennsylvania primaries. Barack and his wife Michelle planned to have breakfast at Pamela’s Diner in the Strip; members of the press tagged along too. Pam Cohen and Gail Klingensmith, who own and run four of the six P&G Diners in town, received brief notice that the political process would run through their Strip District diner that morning. They both got there as quickly as they could — and had a moment that would change their lives.

“We sat at the yellow Formica table in the middle of the diner,” remembers Gail. “I was in the kitchen making the pancakes,” says Pam. “There were Secret Service men watching my every move.”

At the end of the breakfast, a reporter tossed out a question. The Pittsburgh Post-Gazette reported that Obama said, “Before I answer this question, these really were maybe the best pancakes I’ve tasted in a very long time. Get some take-out. You don’t even need syrup on them. They’ve got [these] crispy edges.”

It was the beginning of a friendship with Pam and Gail that continued throughout the Obama years. In 2009, Cohen and Klingensmith were invited to the White House to make pancakes at a Gold Star mothers breakfast on Memorial Day. They then became informal ambassadors for the city, travelling to D.C. for White House Christmas parties, the second inauguration and Pittsburgh Penguins recognitions; they also attended all of the Obamas’ subsequent Pittsburgh appearances as VIPs.

In September 2009, when the president hosted world leaders in our city for the G-20 Summit, the first lady took several of her staff for pancakes at one of the other P&G Diners (inside the Lincoln Pharmacy in Millvale). “Big black cars pulled up,” recalls Jennifer Cohen, Pam’s sister, who runs the landmark family pharmacy. “And then Michelle Obama walked in.” Gail and Pam had been tipped off and arrived several minutes later.

Pancakes were frequently mentioned on subsequent visits from the former first family. It’s a warm and comforting way to think of a city once known mostly for smoky skies and dirty steel mills: Pittsburgh, City of Pancakes.

This article appears in the May 2017 issue of Pittsburgh Magazine.
Categories: From the Magazine, Hot Reads, Rick Sebak