How a Former Church Became a Hallowed Home

Remie Ferreira spent three years turning a 165-year-old former church on the South Side into a home with modern amenities, while still retaining its historic character. 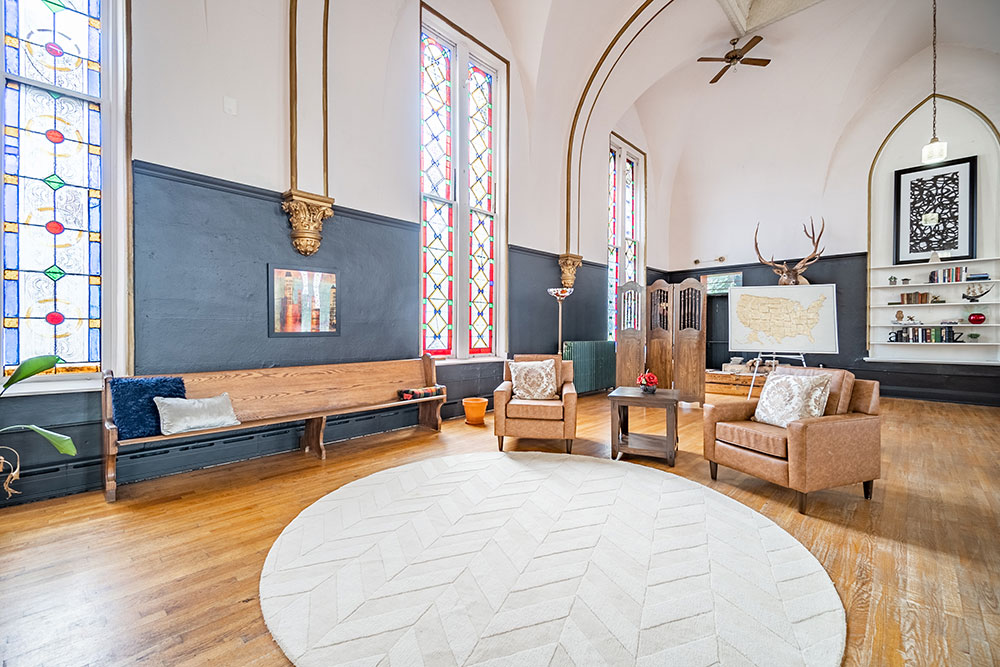 Shortly after Remie Ferreira listed his home, a 165-year-old former church in the heart of the South Side, for sale near the end of July, it started getting noticed on social media.

“I was surprised. It went viral,” he recalls.

Upon seeing the red brick building’s striking features, which stand out even in a neighborhood as architecturally significant as the South Side, it’s not hard to imagine why. A historic landmark — which throughout the years has been home to the Gypsy Cafe and Fresh from the Farm Juices —  the building retains its Gothic Revival roots (ornate buttresses, soaring ceilings) yet has been transformed into a lofty, open-concept home outfitted with modern amenities.

On the Facebook page For the Love of Old Houses, a post with the home’s listing garnered more than 5,000 shares and over 2,600 comments from people across the country marveling over the 4,800-square-foot space, sharing ideas for they would do with it (event venue was a popular choice) or simply wondering about the heating bill.

But thoughts of creating an internet stir were far from Ferreira’s mind three years ago. 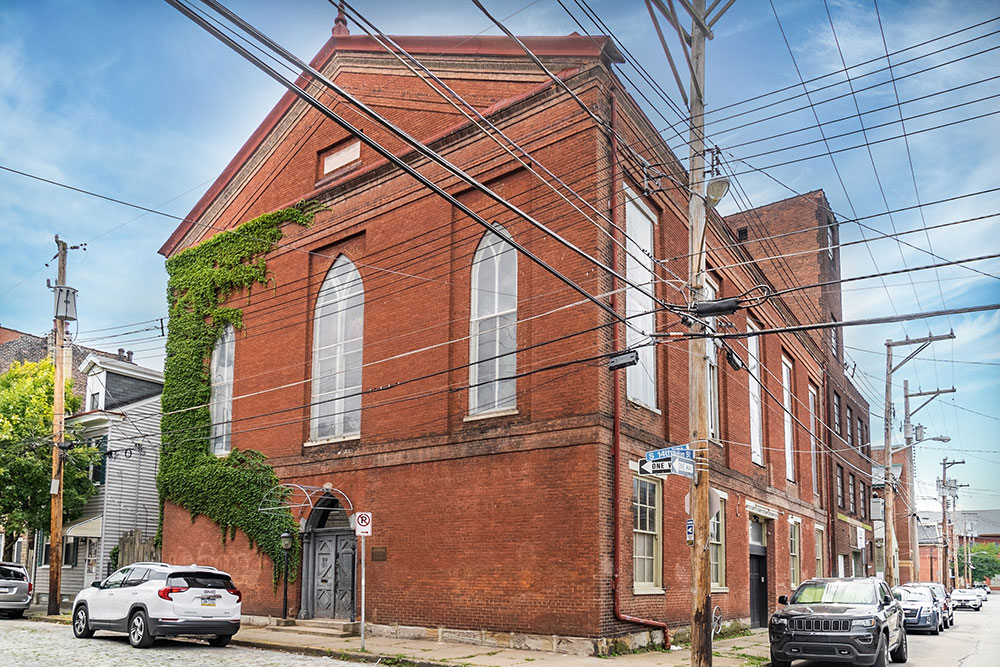 In 2017, he was living in the suburbs of North Hills and searching for the right property to rehab. After a home purchase in Sewickley fell through, Ferreira was visiting architect Jody Schurman — who offered his professional guidance throughout the house-hunting process — at Lab 8 Designs on the South Side when the project found him.

Walking by the former First Associated Reformed Presbyterian Church on South 14th Street, Ferreira noted the building — where he once took a date during its Gypsy Cafe days — was for sale. A sign on it said “Call the Irishman,” the catchphrase for Harry O’Brien, a real estate agent with Pittsburgh-based Carlson Associates whose specialty is residential and multi-unit investment properties around the South Side. Ferreira calls him a local legend.

So he called the Irishman. 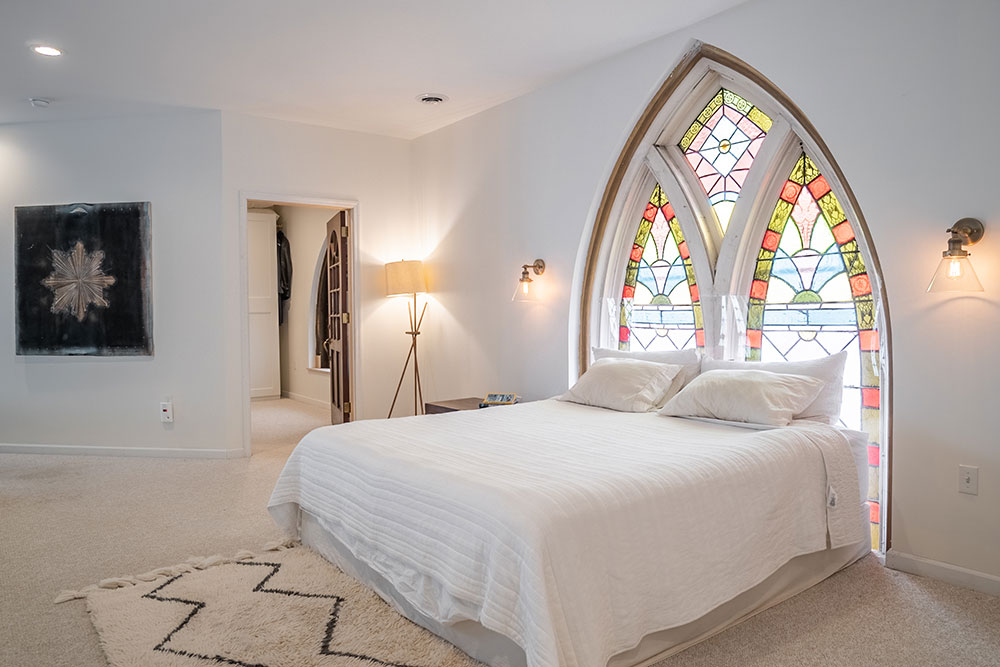 “I said to him, “What’s wrong with the building?’ He said, ‘Nothing, except the price is too low,’” Ferreira says with a laugh.

Ferreira, who owns REMSTATE Energy Group, an oil and gas consulting agency — as well as a side business in real estate investments and rentals — says he spent more than six months negotiating a price he found fair for the building, all while dreaming up plans for the space.

However, the peace of mind he felt as he ascended the dual staircase from the building’s lobby onto the main floor, bordered on each side by a series of original, floor-to-ceiling stained-glass windows, can only be described as priceless.

Although the property no longer has any iconography, it retains the hallowed feeling of a beloved church.

“When you walk upstairs, you get this feeling of just warmth and comfort,” Ferreira says. “It’s just grand. I have a picture of me walking around and looking up at it and I know just what I was thinking in that picture, and it was, ‘Wow, this is so awesome.’” 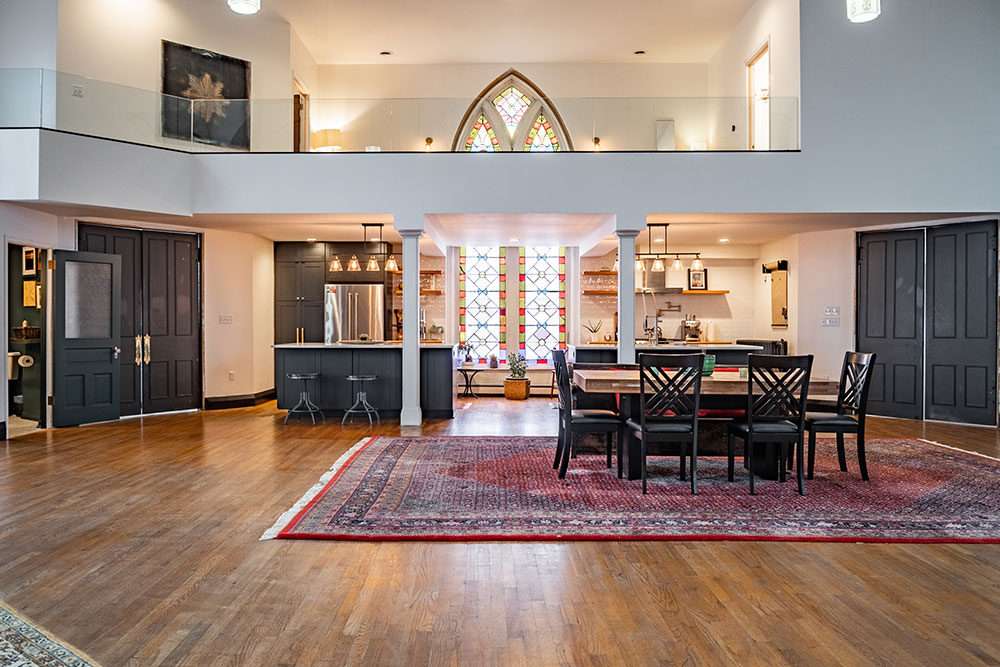 His joy was followed by a marathon of physical labor. The building, which already included a one-bedroom apartment on the lower level that opens into a courtyard — Ferreira jokingly calls it the pied-a-terre — was generally in good shape, but it still needed work, which Ferreira calls par for the course with old buildings.

“We did repointing on the bricks, some power washing, and cleaned up the ivy,” he says.

While the main doors to the church are original — and Schurman says they were mostly hands-off with the exterior — he and Ferreira did go before the city’s Historic Review Commission for approval to insert a garage door where a set of commercial glass doors once led to Fresh from the Farm Juices. The space, which still has a mural from the juicery on the concrete floor, now is a four-car garage. It also was used as a staging area during renovations. 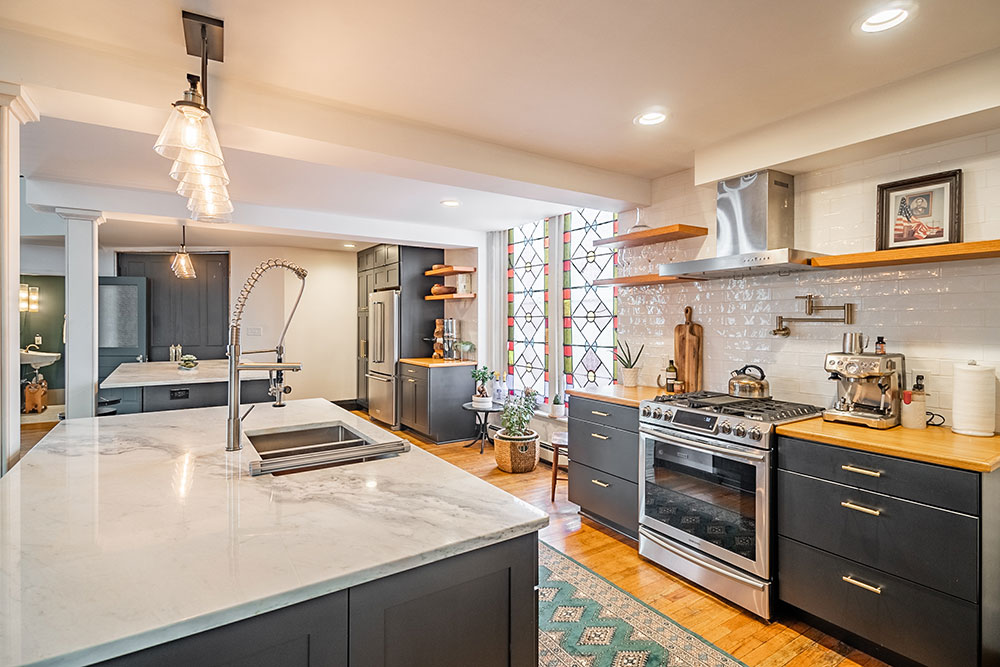 One of the most transformative changes took place in the kitchen. Aided in the construction by a trio of Joes — local contractor Joe Grimes, his son, Joe Jr., and grandson Joe III — Schurman redesigned the existing kitchen, which he described as “hacked together.”

“The kitchen area improved one thousand percent,” he says.

“The church space itself we did absolutely nothing because it was beautiful as is,” Schurman says.

Well, not completely nothing. Much to the amusement of his contractor, Ferreira — who originally planned to turn the cavernous space into two units — often spent downtime before or after work or on weekends scraping and repainting the 28-foot-high tin ceilings from atop the scaffolding he bought shortly after moving in.

“Joe would say to me, ‘Hey Da Vinci, what are you doing up there,’” Ferreira says. 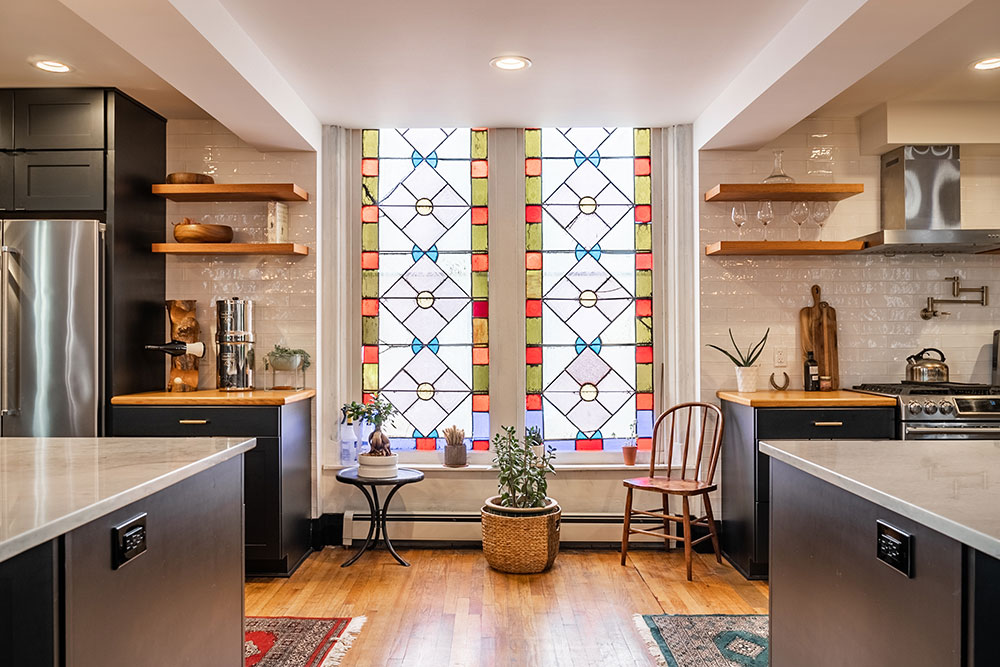 After careful consideration, Ferreira repainted the forest green portion of the walls a rich black, which he felt complemented the remaining white walls, the original brass pendant lights that dangle from the tall ceiling, and the gold cornices of the buttresses that embrace the heart of the living space like a set of ribs.

Also receiving a major overhaul was the alcove above the kitchen — believed to have been a choir gallery — which Ferreira, after shoring up the archway supports, turned into a loft bedroom surrounded by a clear glass railing that overlooks the main floor.

While the loft has many modern amenities, including a walk-in closet and a spacious ensuite bathroom, it retains its original character in the form of an arched stained glass window that acts as a headboard for Ferreira’s bed.

“It gets beautiful light in the morning, but you can’t really sleep in,” he says.

Although the staircase leading to the bedroom appears authentic, it actually was constructed by Grimes using wood Ferreira picked up in Ohio and refinished. A vintage newel post at the bottom of the steps is courtesy of an old farm in Indiana.

Indeed, the entire space is dotted with second-hand pieces, many found at Construction Junction in Point Breeze. This includes the French provincial-style chandelier suspended over the clawfoot tub — a Craigslist find — as well as a long wooden vanity, which Ferreira topped with a marble slab to create dual sinks. 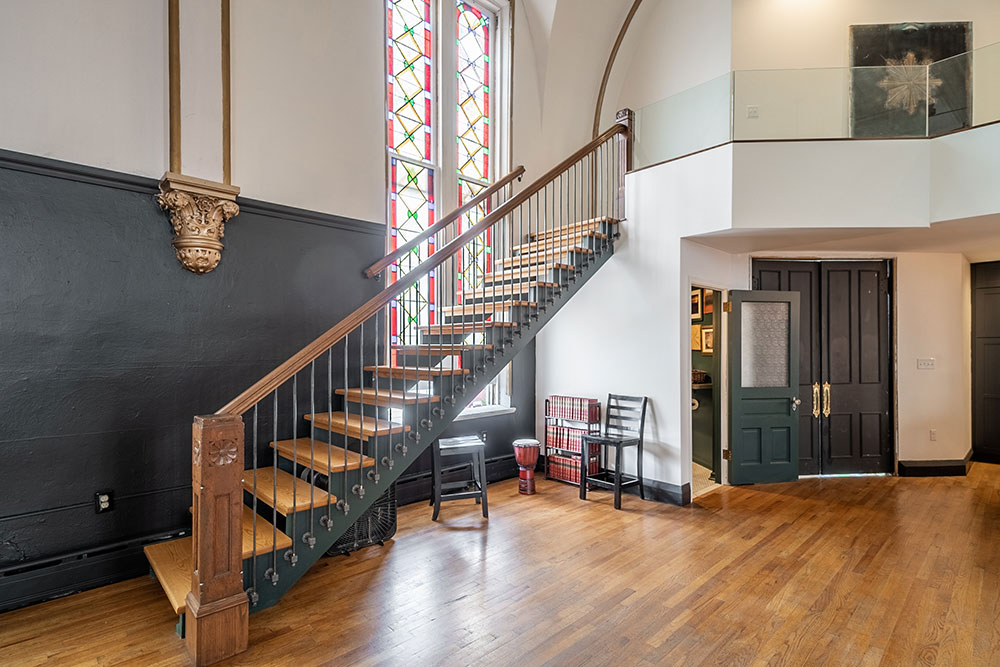 “When doing a renovation, in order to stay within the budget, or close to it, you have to get creative,” Ferreira says, adding he got on a first-name basis with Construction Junction employees.

Although he sounds nonchalant as he describes the hard work that went into renovating the space, he admits there were days where he felt overwhelmed, particularly as black dust enveloped the bathroom area.

“There are days you don’t enjoy it, and you can lose sight of the end goal when you’re in the thick of the renovation process,” he says. “But it always felt like my place, like something I wanted and needed to do.”

That feeling only intensified when he discovered a wooden clock box with an inscription noting it was made in Plymouth, Connecticut, the same small town where Ferreira grew up and where he lived before moving to Pittsburgh in the mid-2000s to open the former Oh Yeah! Ice Cream and Coffee Co. in Shadyside (now home to Millie’s Homemade Ice Cream) with a buddy from college. 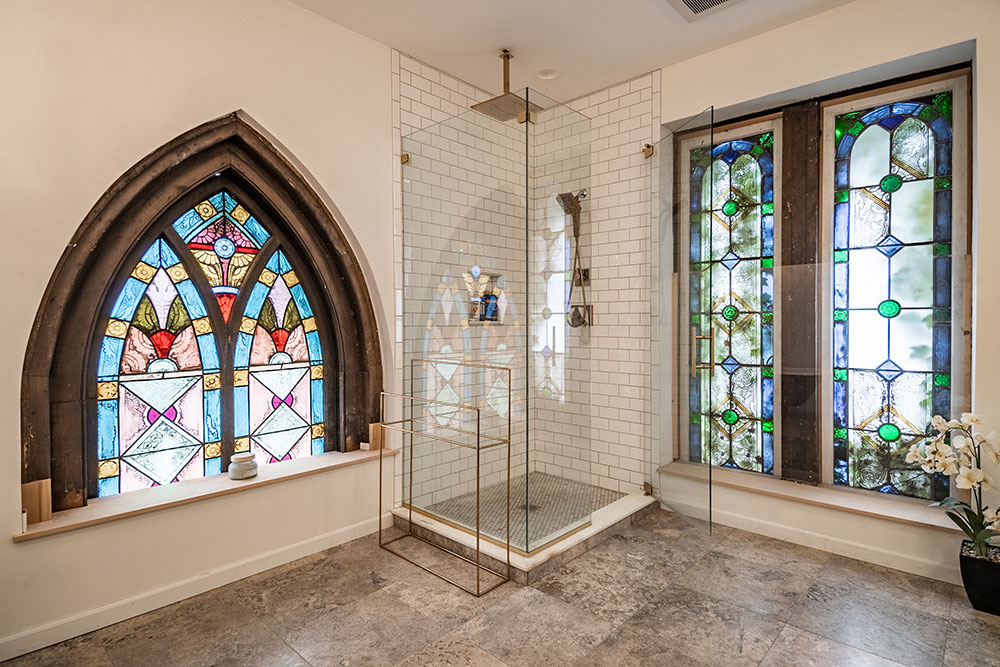 Ferreira is equally philosophical when it comes to discussing what’s next for the property. Days after listing it for sale with RE/MAX Select agent Dustin Hook (with an asking price of $850,000), Ferreira received an offer, which he is currently negotiating with the potential new owner.

“This place is for the creative type, the artist, for someone who enjoys letting their mind roam,” he says. “I wouldn’t feel slighted if he changes the things that I did. Everyone wants to make something their own, and everyone should be able to make it their own.”

As for his own next move, Ferreira is undecided, although he wouldn’t rule out taking on another renovation.

This article appears in the October 2020 issue of Pittsburgh Magazine.
Categories: From the Magazine, HOME + Design, Hot Reads