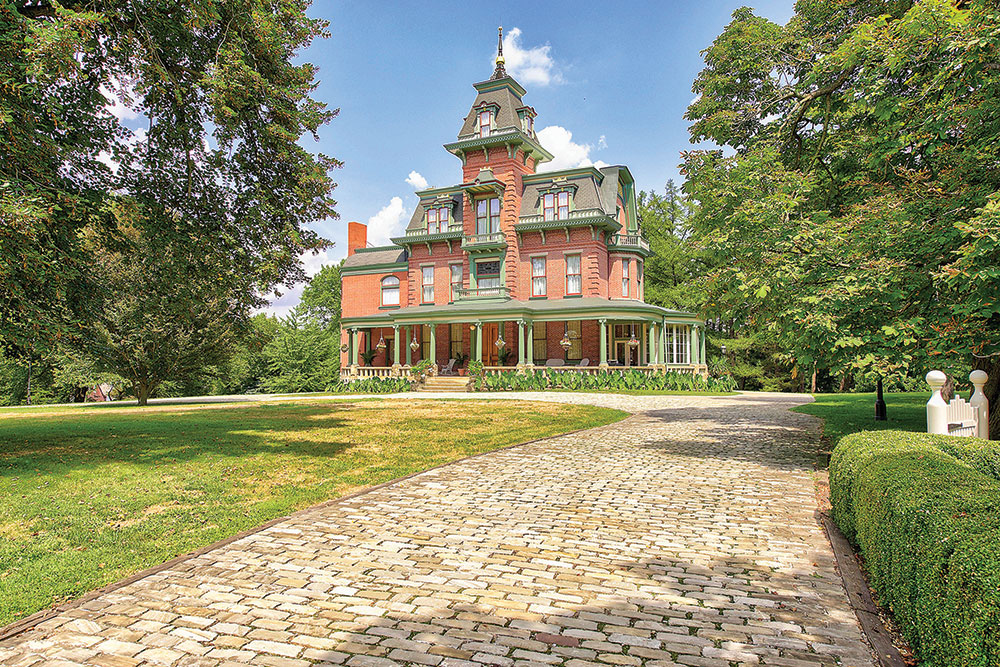 To kids like me who grew up in the neighborhood, it’s just known as “King’s Estate.” We never gave much thought to the grand house at the end of the street in Highland Park. (In fact, we never knew the street had a proper name.) For us, the main attraction was sledding down that awesome bowl of a hill.

At first snow, we dressed and dragged our gear there. Little kids with parents would traverse the side closest to North Negley Avenue, a long cozy slope where speed isn’t a factor. When your skills improved, you graduated to the cobblestone side of the street. Bars of Ivory soap emerged from pockets to wax sled blades to perfection and races to the bottom of the hollow were decided by a lookout, who determined the winner by whoever passed first under a low hanging branch — the de facto finish line. 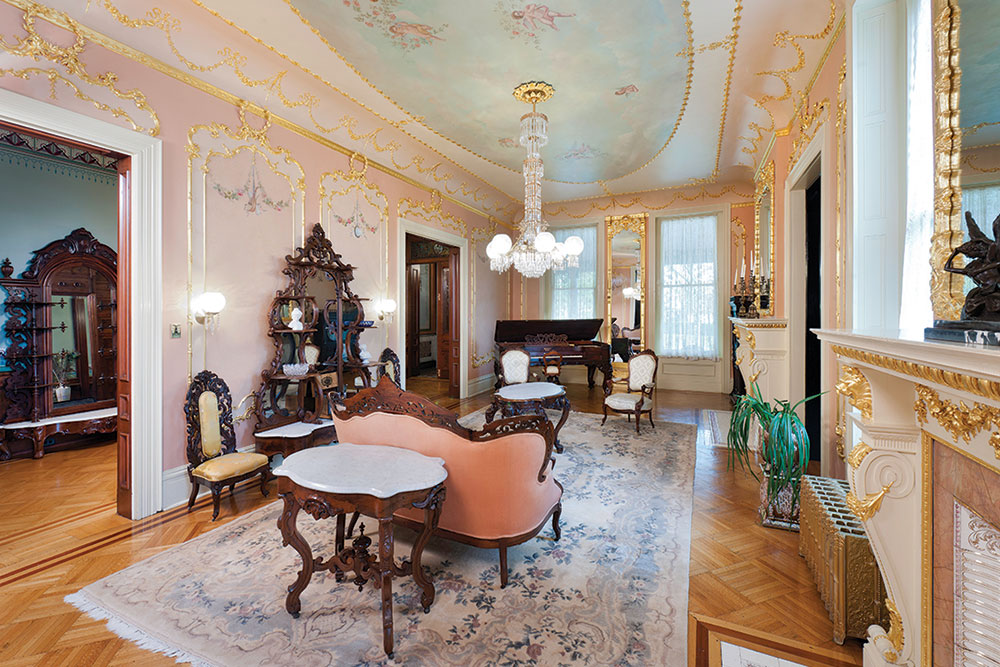 Near the mansion, the steepest part of the hill has a single castle watchtower. Back then, we would climb to the second level and stare out of the rifle pit, wondering if a “real” soldier ever guarded the place. The steepest side is also where daredevil kids would pack the snow for a double-jump. Only the bravest of hearts would start from the top and go airborne.

Growing up, I never imagined I would spend a great deal of my life writing about houses, people and places that make this city great. What a privilege it is.

Now, I get to bring these stories to you through the pages of Pittsburgh Magazine. Four times a year, we’ll look at the Houses Around Here and check out what sold, what’s available and what’s coming soon. Weekly, you can check out Nest online as we present some hot properties. 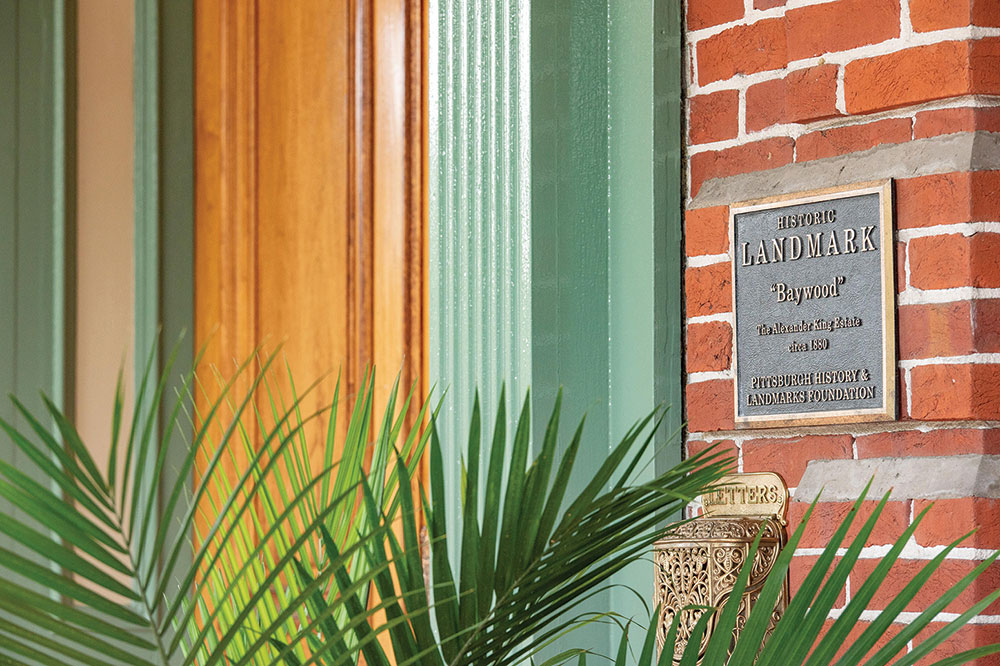 By the way, that house? It’s called Baywood. It was built in 1880 for Alexander King, grandfather of Richard King Mellon. Its real address is 5501 Elgin St. And it’s for sale.

Dr. Frank Brown and his wife, Maura, bought the 22-room Second Empire-style mansion from the city 26 years ago. It was in a frightful condition. Among the atrocities inside were numerous rooms, wallcoverings and mahogany woodwork painted in layers of black, then painted over again white. The Browns made it their mission to restore this grand piece of Pittsburgh’s history.

Alongside some of the region’s greatest craftsmen, they put in years of personal sweat equity to rehabilitate the home. Walls have been repainted and regilded. Several rooms now wear Bradbury & Bradbury wallpaper on the walls and ceilings, and even the plumbing was restored with historic pieces, including a rib-cage shower unit in one of the baths. It is a true historic treasure, with museum-quality work.

This is on top of all new wiring, mechanical systems, plaster repairs and exterior restorations that encompassed removing dozens of layers of white paint and rebuilding a wrap-around sun porch. It is proudly one of the finest homes in the world, as well as a designated landmark by Pittsburgh History & Landmarks Foundation. 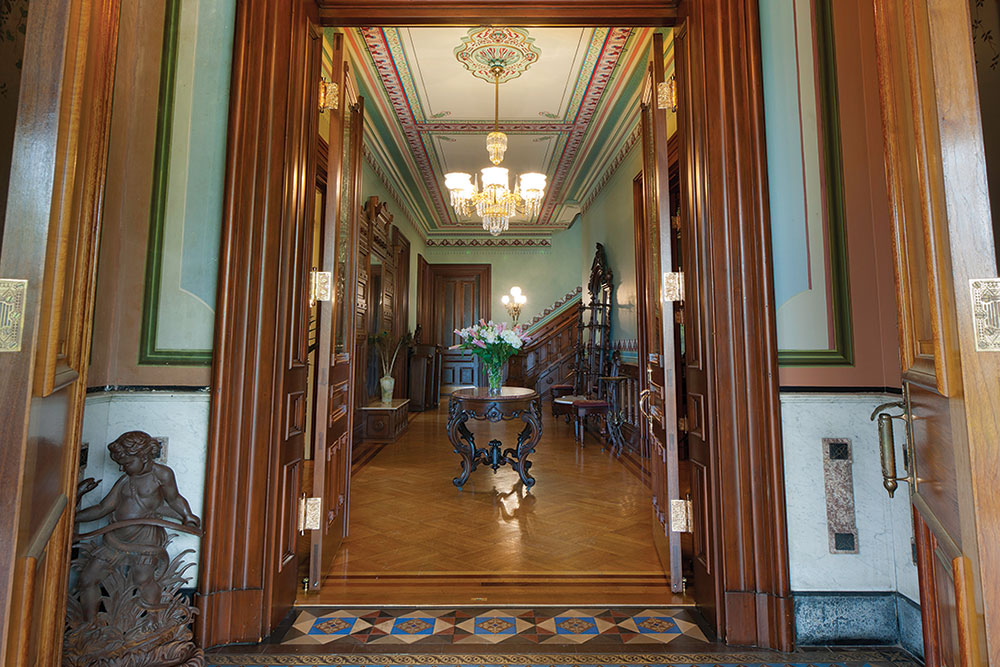 Most of the home’s antique furniture is included in the sale. Pieces of noted provenance include a bed attributed to Andrew Carnegie, a circa-1875 Brunswick Monarch pool table and a stunning office suite with carved gryphon legs and chairs. 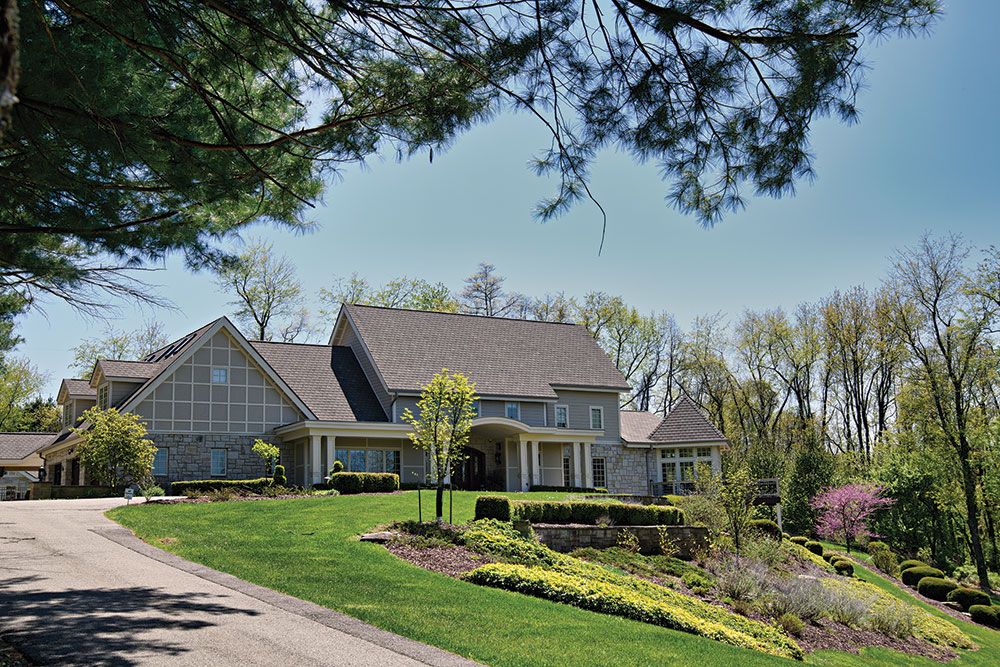 Last year was a banner one for former Steelers defensive linebacker Ryan Shazier. He officially retired from the team and launched the Ryan Shazier Fund for Spinal Cord Rehabilitation. In December, Ohio State University Athletic Director Gene Smith announced Shazier completed his degree in psychology with a minor in business management at the university. Then, Shazier spent the holiday season spreading good cheer with shopping sprees for families affected by spinal cord injuries. 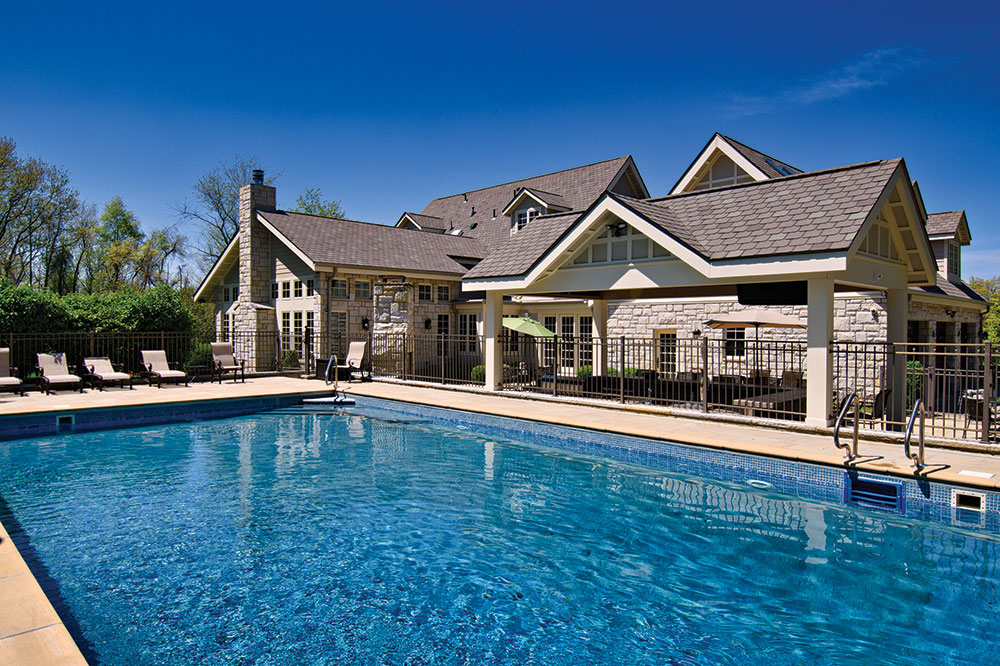 He also is selling his family home in Fox Chapel. Howard Hanna realtor Trudy Ward points out the seven-bedroom house has a lot of high-end amenities. This includes a chef’s kitchen with Sub-Zero, Miele and Dacor appliances and a swoon-worthy walk-in pantry, one of the most sought-after features in homes today. Situated on more than 9 acres, there is an outdoor kitchen, fireplace, swimming pool and a pool house. The owner’s suite has a private balcony, sitting room and a luxury bathroom with radiant floor heating. And yes, there is a wine tasting cellar, so bring your prized collection; it will fit with room to spare.

Modernly Wild Renovation
Former Steelers player Ian Wild listed his renovated home for sale in September. The Mt. Washington home, located in Grandview Park, features 1,567 square feet of living space with sprawling views of Downtown and Point State Park. The renovation turned the century-old cliffside home into a modern oasis with two exterior viewing decks (one on the rooftop) and industrial siding that can withstand the elements. Inside, large picture windows give way to an industrial modern vibe that is clean and crafty. The black and white encaustic bath floor tile lends a nice touch. A Pittsburgh native and alumnus of Baldwin High School, Wild served as the general contractor on the home, a trade he learned from his dad, Jim Wild, owner of JJ Wild Construction Co.

City Charm
A lovely, covered porch, sidewalks and mature trees made this renovated storybook brick within walking distance to Walnut Street a winner. Built in 1900, the Shadyside home’s original features include inlaid wood floors, arched windows, doors and lots of space. The renovation was respectfully completed and the new kitchen has custom cabinetry, open shelving and subway tile. Bathrooms are light and bright, providing a fresh update. The lower level has a bar kitchen, billiards area, custom paneling and an original fireplace. The home sat on the market for a year before Michele Van Balen of Piatt Sotheby’s International Realty took over the listing. The pandemic put the brakes on a lot of real estate work for several months and she was able to pick it up just as the juggernaut was starting to free. The listing closed at the end of December for $899,000. “It’s a great house. I was very happy to list it and have success with it,” Van Balen says.

This article appears in the Jan/Feb 2021 issue of Pittsburgh Magazine.
Categories: From the Magazine, Hot Property, Hot Reads