The Cape Cod-style home has a lovely arched doorway and a cozy family room addition. 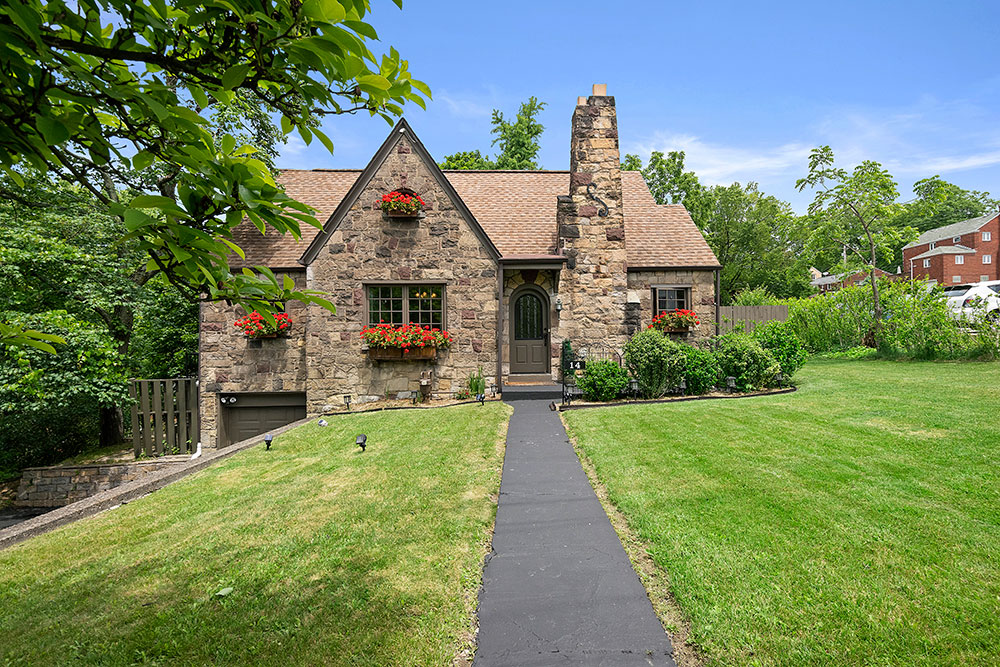 It’s easy to see why Charles Kuchta fell in love with his home in Pleasant Hills.

Built in 1939, the storybook Cape Cod-style home sits on a double lot and features a stone façade. Planter boxes spill over with fresh flowers, and the arched front doorway makes a charming statement. A lovely community church is the next-door neighbor. 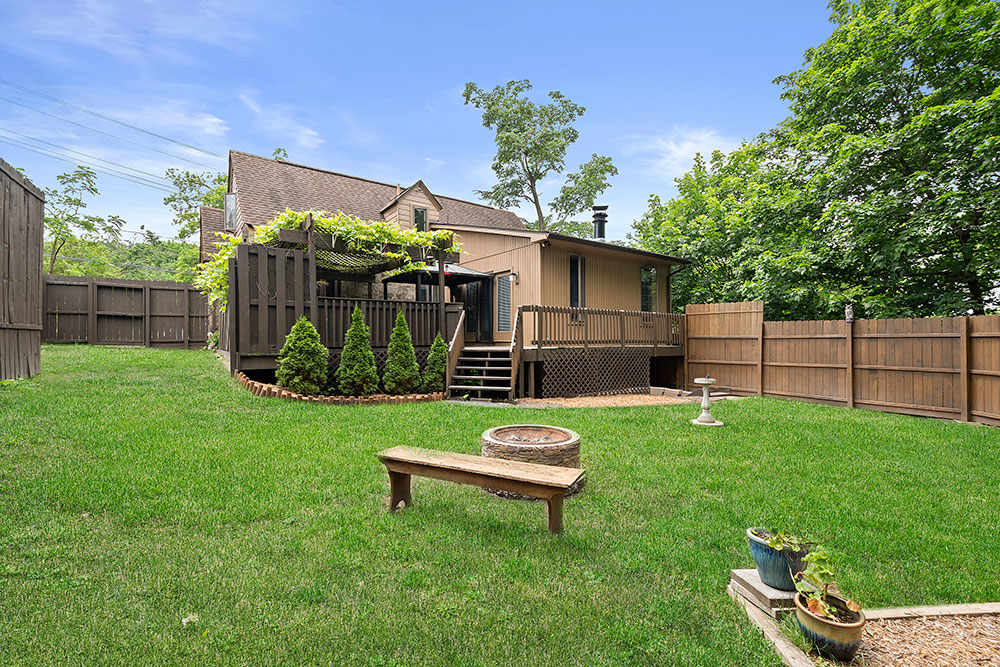 The expansive backyard — where Kuchta has hosted many cookouts and outdoor movie nights — boasts tiered spaces that include a vine-covered pergola, pavilion and several smaller decks that offer privacy as well as multiple entertaining options.

“The previous owner added a series of decks that wrap around the back of the house,” Kuchta says.

Inside, the three bedrooms and two and one-half bathrooms are equally charming.

But all of that loveliness wasn’t enough to outshine a Pittsburgh winter.

“We are moving out of state,” Kuchta says. “The weather is hard.” 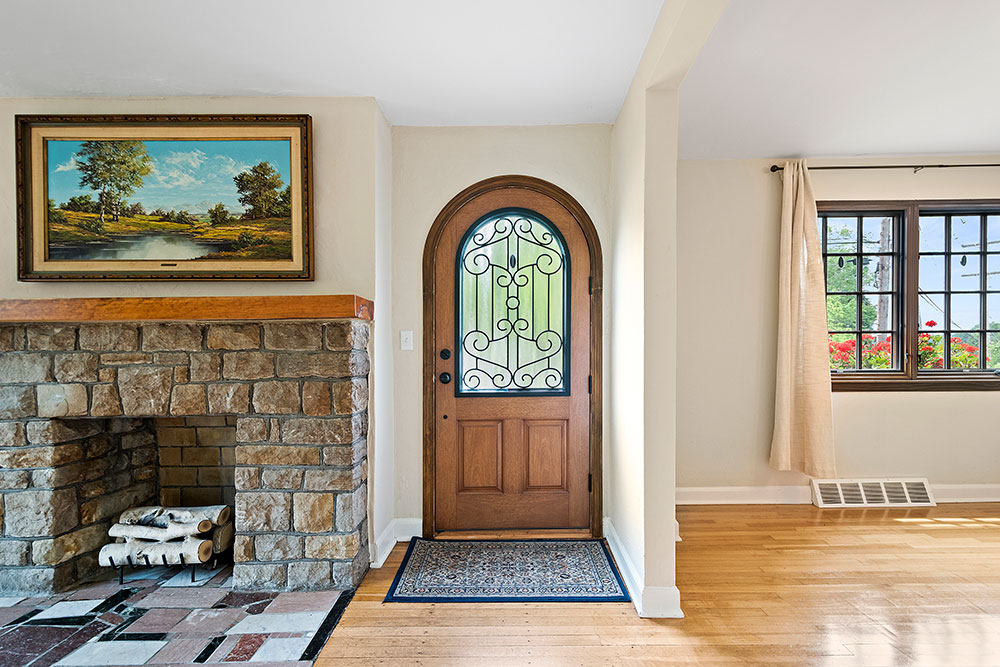 The interior’s original hardwood floors and a grand stone-façade fireplace with a gas insert give a homey vibe to the 16-by-13-square-foot living room. The hardwood floors extend throughout the home, including the dining room and the two separate family rooms. 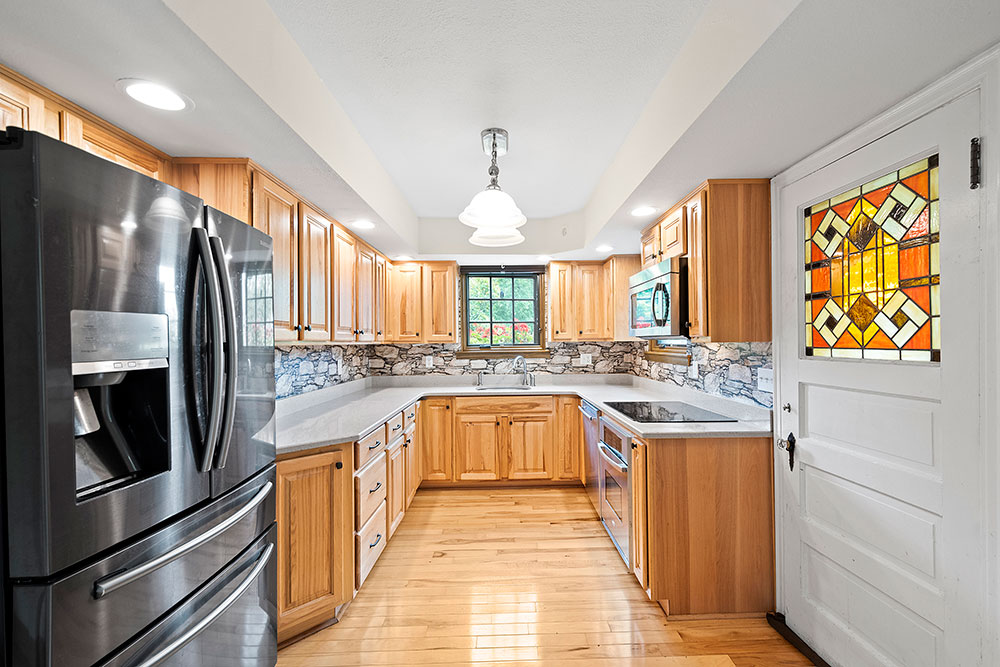 The kitchen is a nicely sized 23-by-10-square-foot space featuring a stone backsplash, oak cabinets and a built-in cooktop. Upgraded appliances include a double-drawer, French-door-style refrigerator and a digital oven. 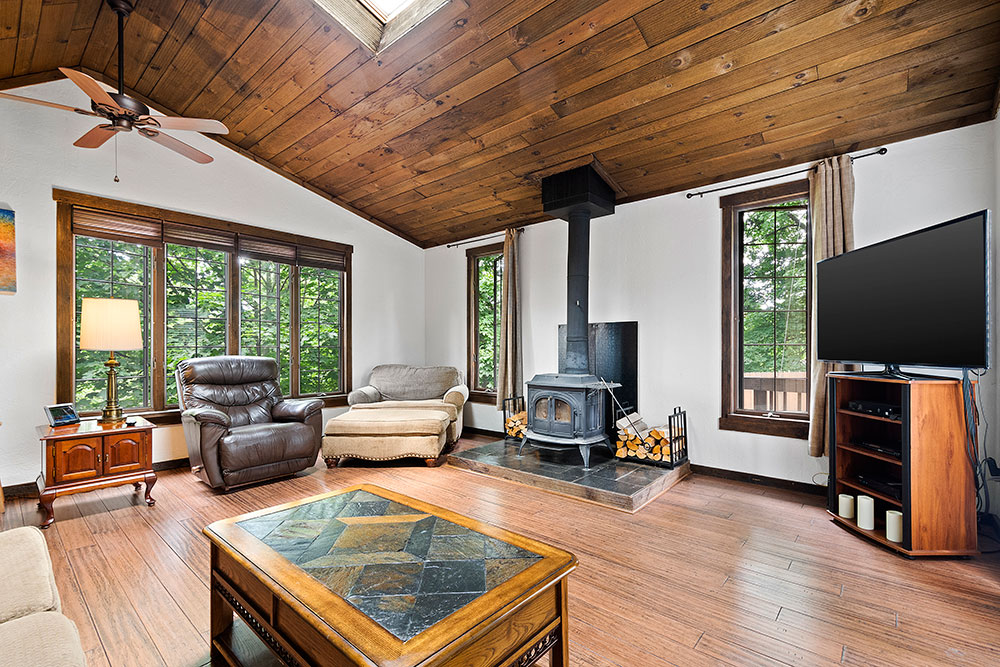 A 17-by-10-square-foot family room was added to the back of the house by a previous owner and has a stone wall because it was built onto the exterior. The vaulted ceiling is finished in hand-scraped wood, and a Vermont Castings wood-burning stove heats the entire space in the winter.

The bedrooms include a 14-by-13-square-foot primary bedroom, a 12-by-10-square-foot secondary bedroom and a sweet 10-by-9-square-foot bedroom with a built-in alcove bed made from barnwood and cedar. 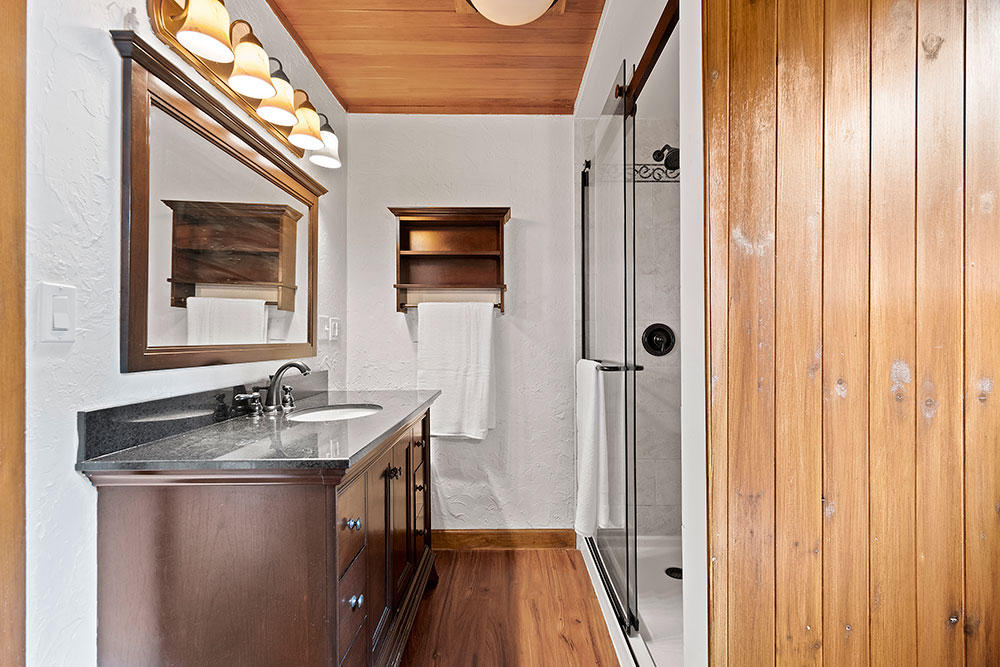 The two full bathrooms were completely renovated. The ensuite bathroom has an all-white bath/shower combo and single vanity sink. The second bathroom has a large standing shower with upgraded glass doors, a 60-inch vanity with stone top and wooden floors that match the ceiling detail.

The clean and bright finished basement has a suspended ceiling, plush carpeting and a gas fireplace. There’s also a laundry room and an extra storage room used as a custom workshop.

Lots of updates make this home move-in ready, including all-new Pella windows, a newer roof and mechanicals. The driveway can fit up to three cars and there is an integral garage.

“My favorite part of the house was the back addition,” Kuchta says. “I just loved that room. You can’t find that in Florida.”

Drawing on her years of experience covering the region’s real estate industry, Rosa Colucci offers Hot Property, an inside look into unique and historic homes on the market. Each week, Hot Property goes behind the For Sale sign to share the story of a special Pittsburgh-area home. And four times a year, Hot Property gives an in-depth look at the region’s real estate market in Pittsburgh Magazine HOME, tracking housing prices and sales and detailing where the hot properties can be found. Rosa can be reached at onecordovaroad@gmail.com.p

About: Pleasant Hills (pleasanthillspa.com)
Population: 8,268
Planes, Trains & Automobiles: A 35-minute commute to the airport. Daily transport via Port Authority. On-street parking.
Schools: West Jefferson Hills School District (wjhsd.net) is ranked 50th out of 500 school districts in the state for academic achievement and 17th in Western Pennsylvania. Thomas Jefferson High School offers a complete slate of AP classes.
Neighborhoods: Pleasant Hills was originally part of the Province of Virginia. It then became part of Westmoreland County and, in 1788, was partitioned off to the newly formed Allegheny County. The area was named after Pleasant Hill Farm, owned by William Walker Jr. The community is home to the A.W. Robertson Arboretum, a 16-acre tract of land with trees that date back more than 200 years when the Shawnee, Delaware and Mingo Native American tribes called the area home. It also is one of only a few areas left in the United States with preserved virgin woodland.