Local comedians share fun facts about Pittsburgh as you tour the city. 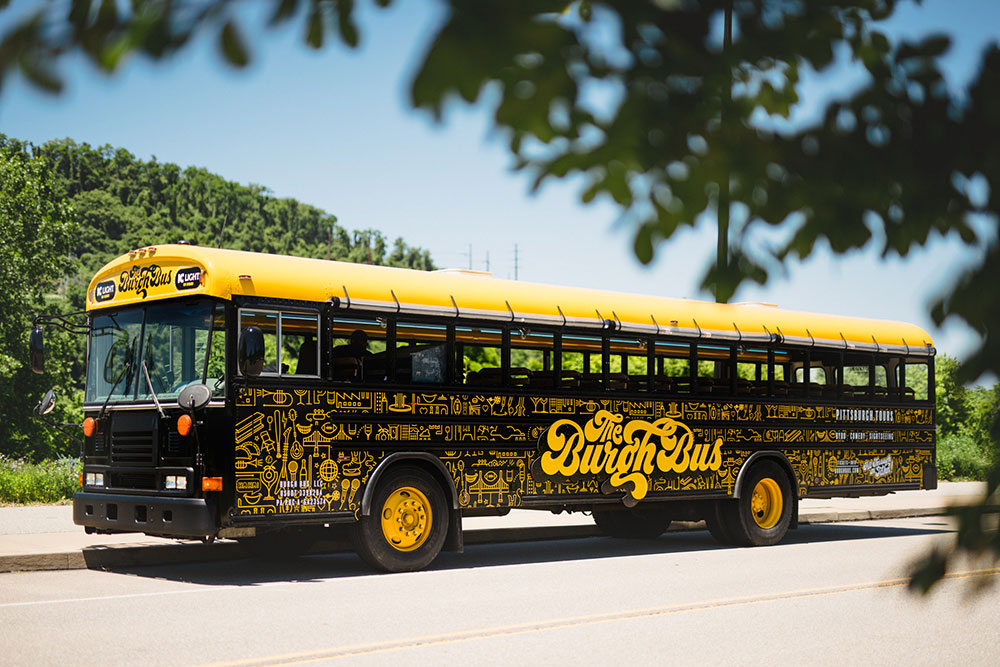 It’s big, it’s bold, it’s black and gold — it’s the Burgh Bus. With its windows wide open, a megaphone blasting and passengers cheering, it will be hard to miss this new tour bus driving Downtown.

After the iconic Just Ducky Tours ended here in 2019, the Burgh Bus is trying to fill that void. Unlike typical tours, the Burgh Bus tours are fully narrated and guided by a local comedian. The tours combine quirky Pittsburgh facts, personal stories and jokes galore. Additionally, every tour is BYOB, which could be an I.C. Light or pop. 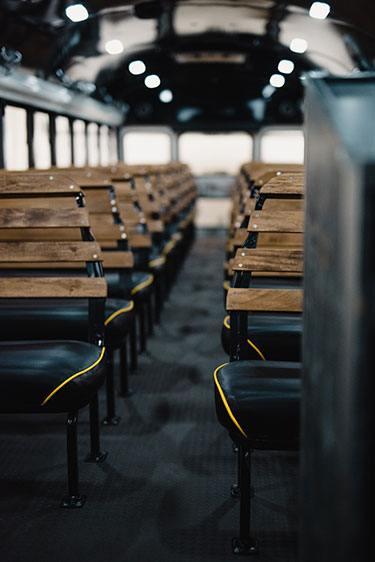 “I feel like we’re kind of scratching that adult Ducky Tour edge that we needed but we can actually drink and still have that cool effect,” says local comedian Jeff Fieldhouse, who started stand-up in high school and hosts the “Babyface Assassin” podcast. “We drove past people that don’t even know about the bus, but it says ‘The Burgh Bus’ and they’re like, ‘Honey, take a picture. We’re getting this framed.’”

The first tour in the converted school bus launched June 11. Currently, the company has two types of 90-minute tours that have the same route starting on Penn Avenue, between 10th and 11th streets, and require pre-purchased $35 tickets — the “All through the ‘tahn”’ tour and the “R-Rated” tour. The “All through the ‘tahn’ tour is a standard excursion for tourists and families during the day. The “R-Rated” tour runs at night and invites locals to have more of a party while also hearing some sightseeing Pittsburgh facts.

“Each tour has its own identity,” says another comedian, Matt Light, who’s been named best comedian in Pittsburgh four times and is a regular guest on WDVE. “For example, the daytime tours are actual tours, where some of the comedians will be more factual-based and give you an actual tour. The night show, for me, is pretty much if you could put Carson Street into a bus. It turns into an absolute party.”

Since local comedians host tours, every ride is different. Currently, the bus has six comics in its rotating crew but is looking to add even more. According to Burgh Bus owner Nick Walker, they strive to appeal to both locals and tourists. With so many various comedians who have loads of jokes and interactions with people on the street, passengers can expect a new show every ride — even diehard Pittsburghers who bleed black and gold will learn something new.

“It gives a one-of-a-kind atmosphere,” Light says. “When you go to a comedy show, you kind of know what to expect. The thing about Burgh Bus is every single show that I’ve done on the bus has been completely different.”

The Burgh Bus introduces local comedians to a new audience, too. According to comedian Chrissy Costa, who studied sketch comedy at Chicago’s famed Second City, the bus promotes local comedians and they help promote the bus. This positive feedback loop helps the Pittsburgh community learn about their city and all its hardworking and interesting residents. Additionally, the bus helps comics spread their brand.

“That’s definitely an exciting part of it, especially if you have people from out of town who ride the bus,” says comedian Matty Malloy, who has appeared at Arcade Comedy Theater and Pittsburgh Improv and produces drag queen bingo and comedy shows around town. “That’s a big thing to even get your name to people who aren’t from Pittsburgh because for most of us, that’s kind of our home base.”

According to comedian Aarik Nesby, the bus also helps with learning how to do crowd work. Nesby has been performing around town for five years and is known for his laid-back style and charming stories. 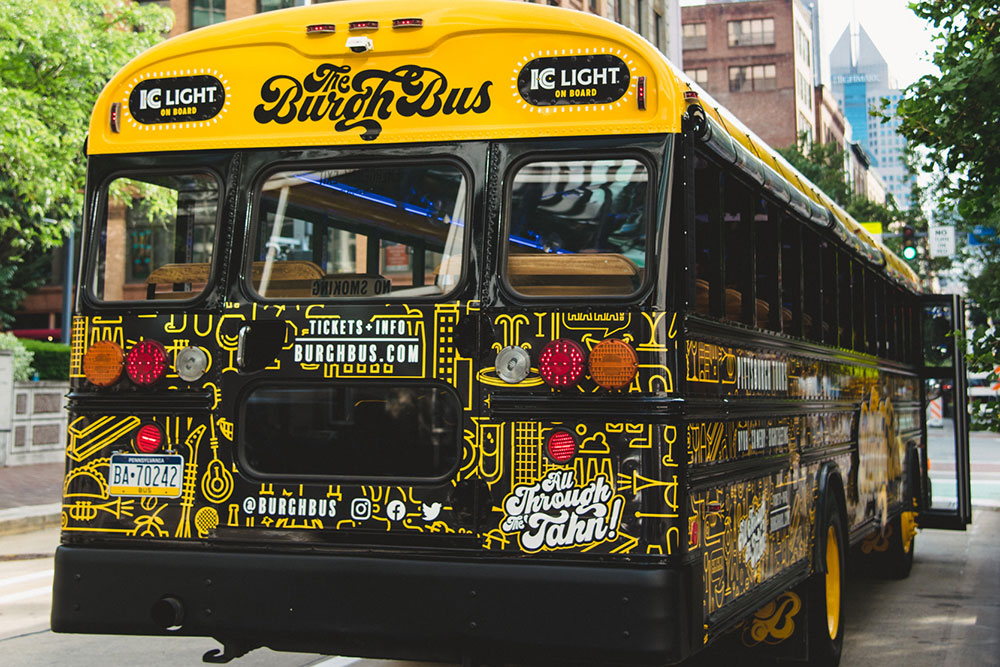 “Because obviously, it’s a very intimate setting,” Walker adds. “If you have 44 people on a tight bus, it’s much different than a comedy club and it opens up a lot of possibilities for them as performers and comics. I think they all see that they’re all really excited for those opportunities.”

Comedians can apply to become a host on the Burgh Bus website. Since the company is new, Walker reached out to the current comedians, like Brittany Alexis, to kick off the rides. Alexis got into comedy to become a better public speaker and has now performed all over town; she also teaches comedy classes at Arcade Comedy Theater.

Walker made a point to choose people who love the city and excel in entertainment. 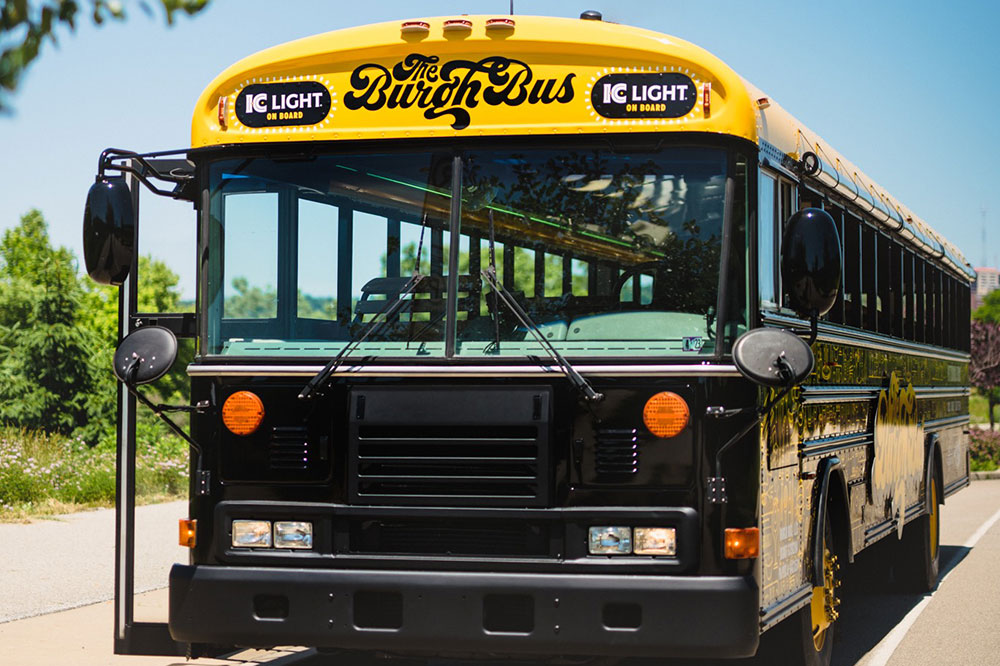 “I am the ultimate yinzer,” Light says. “I love this city, I love how gross our accents sound, I love the worst things about this city. I love to be able to share my love of Pittsburgh with an intimate group of 44 people for an hour and a half.”

Says Walker: “We want to become an iconic Pittsburgh institution. Something unique that the city is proud to call its own.”