The soon-to-be-Mrs. Right searches (and searches) for the perfect Honeymoon destination.

I’m more excited for the honeymoon than I am for our actual wedding day, and that makes sense since just as much planning went into the honeymoon as the entire wedding. Although the trip has been booked for a couple months now, there were several long months leading up to that day when I finally pulled the trigger and typed in the credit card number.

I’m a frequent online shopper, and no matter what I’m buying, I am always sure to compare prices and search for coupon codes. When it came to planning the honeymoon of our dreams, getting the best deal was more important than ever. The first decision was to sign up for a travel rewards credit card. After much comparison, we chose the Hilton Honors American Express. I figured we could charge a lot of the major wedding expenses and rack up the rewards points.  While it may not help with the honeymoon, at least we could save up for another vacation.

The next order of business was to choose a location. Mr. Right’s first choice was Chateau Lake Louise in Banff, Alberta Canada. While I will agree it is a beautiful resort, I do not wish to spend my late-September honeymoon at a ski resort in Canda. My honeymoon dreams have always been of tropical climates.

Tripadvisor.com quickly became my new best friend.  I was obsessed with reading reviews from other couples who had spent their honeymoon at the same exotic locales we were considering. At first, the slightest negative review (not enough lounge chairs at the pool or a rude concierge) would quickly cross a location off the list, but I soon realized that even the highest-rated resorts had some bad reviews.

Night after night, I was fixated on the honeymoon search. I had an elaborate spreadsheet organized by location, amenities, price, number of restaurants and more. (I’m a bit of a picky eater, so having a variety of foods to choose from was very important.) At any given time, I would have at least five different browsers open to Trip Advisor, American Express Travel, Expedia, Orbitz and Travelocity. I tirelessly searched for all-inclusives in Jamaica, Costa Rica and St. Lucia. 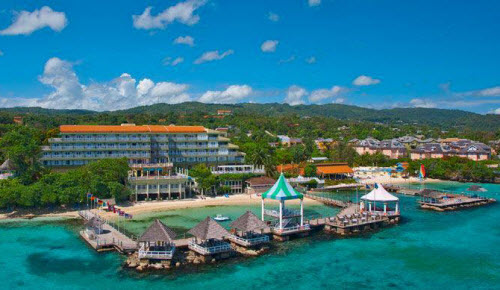 In the beginning, I tried to rule out Sandals Resorts because it seemed so cliché, but each search would eventually lead me back to Sandals. So, now the list was down to Jamaica and St. Lucia, but with three Sandals Resorts in each country, the comparison shopping continued. Since St. Lucia was a bit more expensive, we decided to go with Jamaica. The resort in Dunn’s River Falls had no vacancy, and Montego Bay had fewer restaurants, so the final decision was made—Sandals Grande Ocho Rios.

After comparing the deals on all possible sites, I found they were pretty much all the same. AAA and American Express both offered insurance and were the exact same price, but we would get extra points and a Sunglass Hut gift card (which can only be used after the vacation) with American Express. I’m a sucker for freebies, so I guess I’ll just treat myself to some new shades for the vacation we might be able to take someday with our AmEx points. After five months of research, the decision was made and the credit card was charged.

Everything including food, alcohol and several activities are already paid for, so I’m looking forward to leaving my coupons and frugality in Pittsburgh and enjoying a nice, relaxing vacation with my new husband. 40 days until I’m sunning myself on the white sand beaches surrounded by waterfalls and the sounds of a steel drum band.