Home of the Year 2014: Best Renovation

Touches of glass, modern art and plenty of color transport this Edgeworth home from the 1970s to the present. 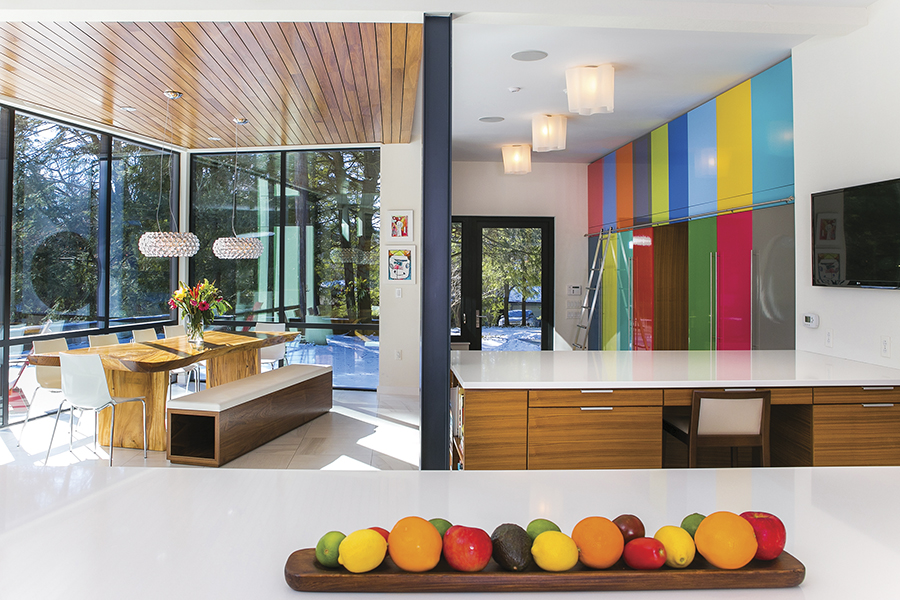 When Betsy Wentz and her husband bought a home in Edgeworth, they considered expanding with a simple addition to accommodate their family of five. But Wentz, an interior designer, felt the 1970s layout with a living room and other outdated aspects was too old-fashioned and lacked a consistent composition. So the couple enlisted mossArchitects and J. Palumbo Contracting, INc. to remodel and transform the space into a home that suited them.

Betsy Wentz knows her modern home with large glass windows may not seem conducive to life with four children under age 11 — the youngest of whom was born just after renovation was completed.

“I tell them people in glass houses shouldn’t throw stones,” she says with a smile when describing her three boys and their playmates. 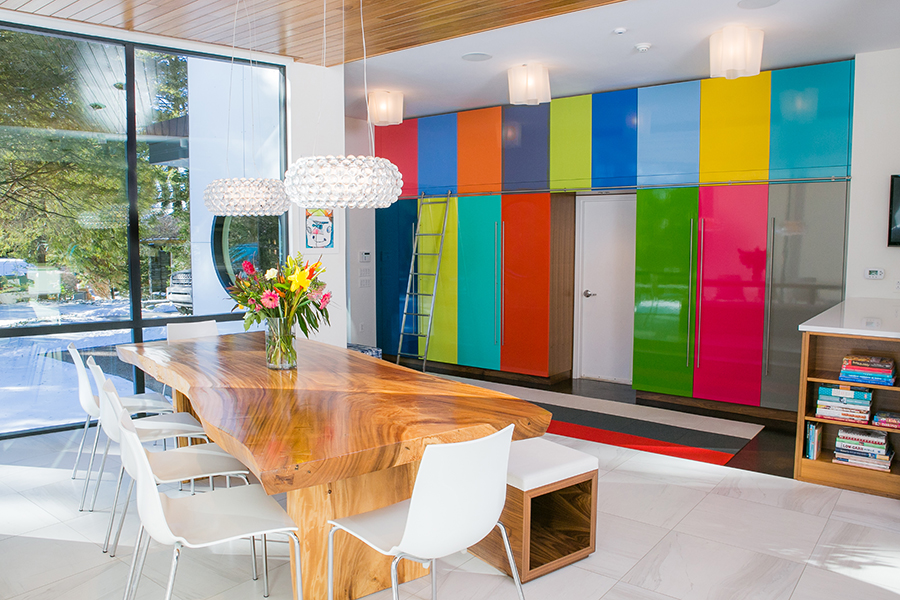 But Wentz, who owns Studio B :: Kay Wiegand Inc. in Sewickley, made sure the renovated space feels like a family home. Color is used everywhere you look, from the Trend tile backsplash above the Miele kitchen range to the modern abstract art that lines the bulkhead ceilings downstairs. Wentz commissioned Phoenix-based painter Grant Wiggins, a friend of a friend, to create two canvases — she also purchased three more pieces of his work — for the home.

“I know it’s not for everyone,” she says of this approach. “But it shows who we are and what we love. It’s a fun house, and it’s a happy house.”

“I was very impressed they took what was a very ordinary, nondescript house and made it into a very pleasant environment, and the usage of color was truly wonderful,” he says. 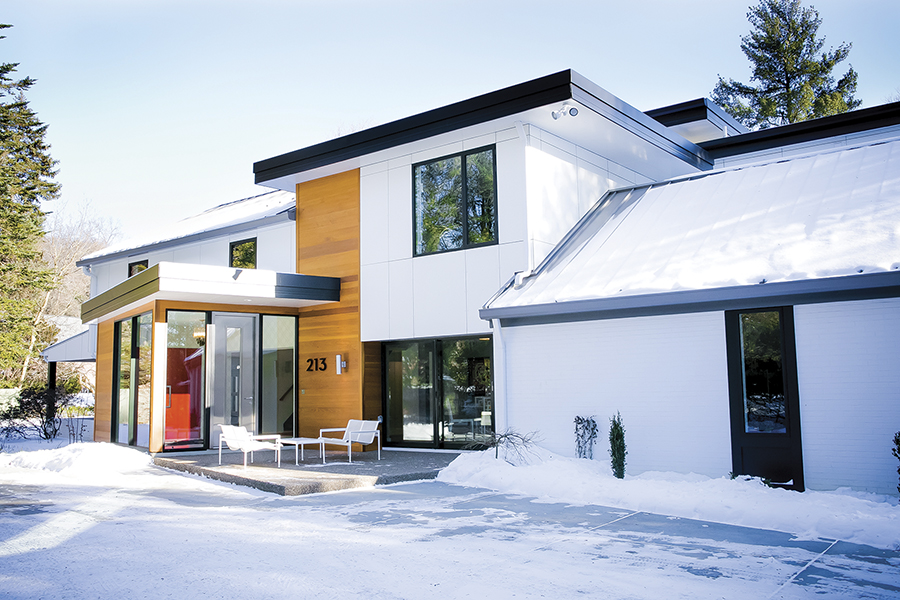 During the one-year, $750,000 renovation, the home underwent major changes. The existing wall separating the front entrance and the main living space was removed, opening up the home’s center.

“It’s great that they chose to push forward and really redo the entire house,” says Andrew Moss, principal of mossArchitects. “You don’t recognize this house as the old, nondescript 1970s house it once was.”

The Wentzes wanted to add a separate wing for their bedroom — the home’s existing three bedrooms went to their four children — so they also expanded with an addition. The first floor of the addition consists of a new, 720-square-foot kitchen-dining area. 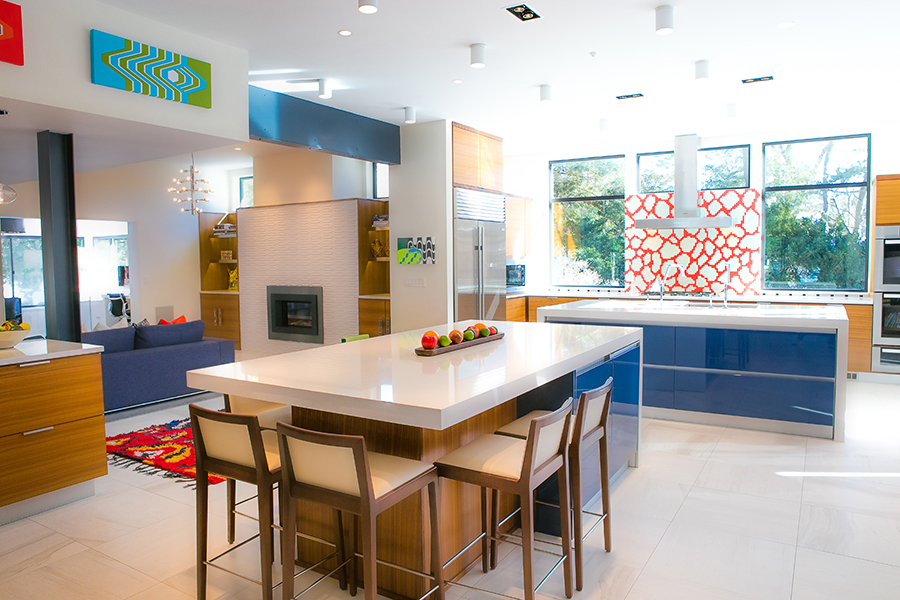 “It’s a well-thought-out and carefully orchestrated insertion of a contemporary space in a traditional, 1970s house,” says Home of the Year judge Stephen Lee. “The excellent use of large expanses of glass captures beautiful views on site.”

When the family moved into the house, its entry was Wentz’s least-favorite room; she says it resembled an old barn entrance with an “odd, Tudor-like” appearance from the outside. Now, it has floor-to-ceiling glass windows angled to mirror those in the new dining room extension on the opposite side of the home.

“One of the things we really wanted to do with this house was have the addition really engage and become a part of the existing main portion of the house,” says Moss. “We really wanted to pull [the design] through and have it be a part of a new front entrance. I think it really comes down to trying to knit all of the pieces together.” 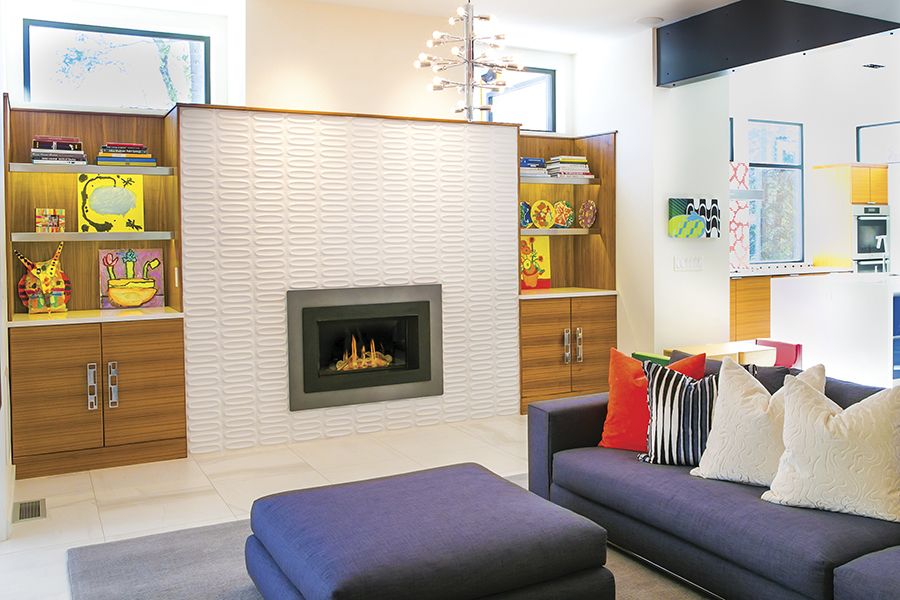 Upgrading the living room presented one of the more difficult challenges. A standing wood-burning brick fireplace was transformed into a gas-burning fixture surrounded by Heath Ceramics tiles. The mid-century modern tiles were individually glazed and couldn’t be cut easily, so walnut bookcases on either side had to be built into the tile.

In the kitchen-dining room, the Wentzes wanted floor-to-ceiling windows, with each containing recessed solar shades. A walnut live edge slab table came from Weisshouse in Shadyside, as did all of the blue lacquer kitchen cabinetry and islands. The walnut cabinetry in the kitchen and master bathroom is from Bittner Distributors in the Strip District. 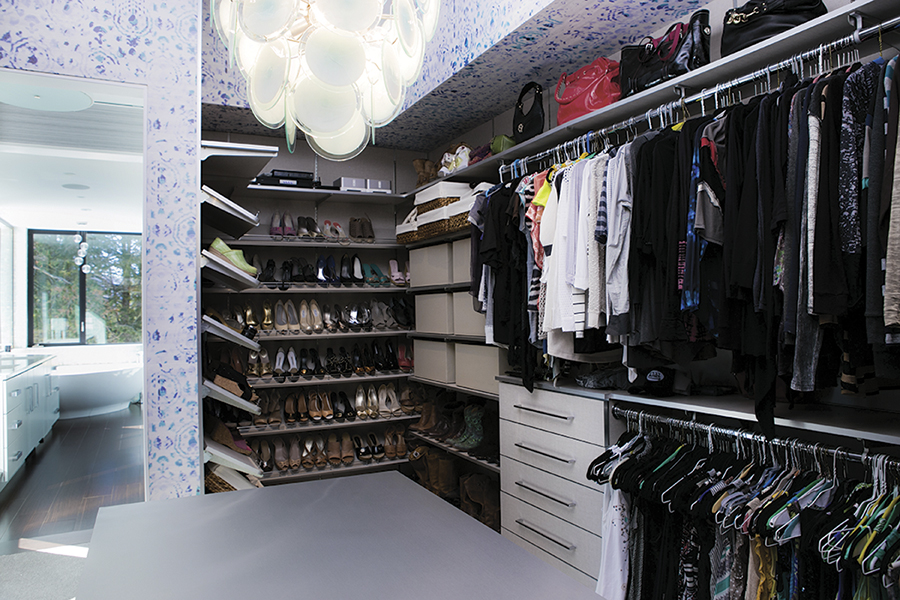 Upstairs, three steps lead from the main interior room to the master-bedroom addition that includes a 225-square-foot walk-in closet and a master bath.

Another gas fireplace — with a concrete slab hearth — is the focal point of the master bedroom. Surrounding white quartz ledger stone stretches to the ceiling and around the corner to the closet entrance.

“We use it every single night,” says Wentz, noting the design was her husband’s idea. 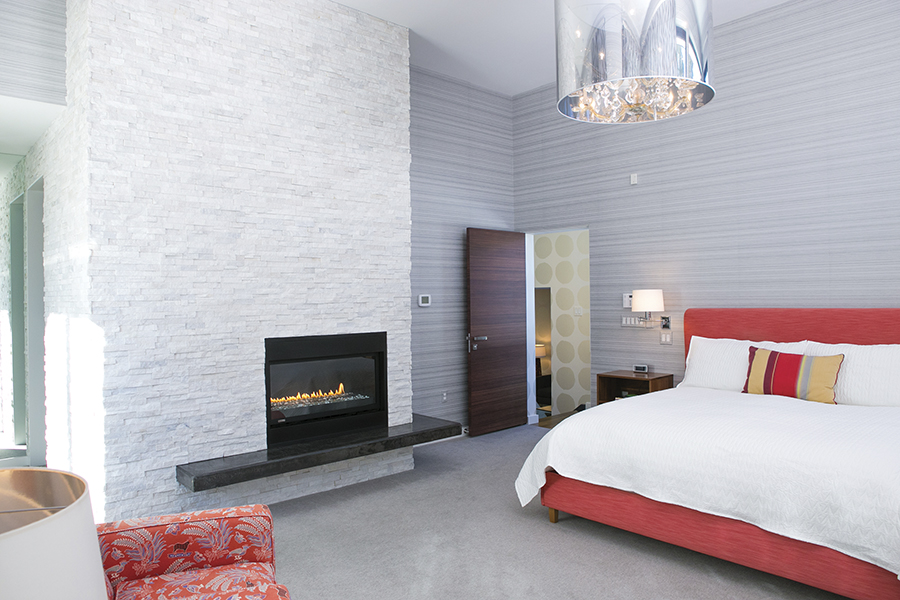 The children’s rooms may have changed the least, but they include such updates as larger windows and a corkboard wall covered with mineral wallpaper that enables the children to hang whatever they like.

Wentz has spent much of her professional life designing residential spaces; this home is among her latest projects. The family renovated their previous home, in Sewickley, about eight years ago, but Wentz spotted the new location while jogging through the neighborhood and noticed it was on the market. 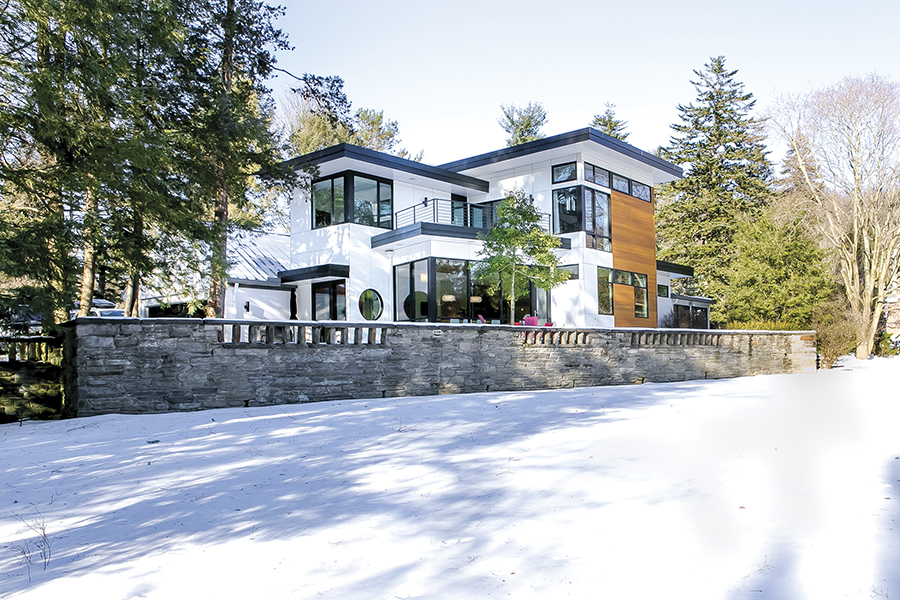 The property spans nearly 2 acres — one purchased from a neighbor in 2011 — and an arbor sits on the home’s southwest side. Stone walls covered in moss and ivy are left from the estate of William Lewis Clause, a president of Pittsburgh Plate Glass, who reportedly owned the property in the early 1900s before his death in 1931.

“I basically fell in love with the land,” she says.

When she broached the subject of moving, her husband reminded her that it hadn’t been that long since they renovated their current home. Wentz persisted, knowing their boys were outgrowing that space. Her husband joked if she could sell that house in a very small window of time — Wentz remembers the deal being about a week — they could purchase the other home. She came through with her end of the bargain, and he held up his. 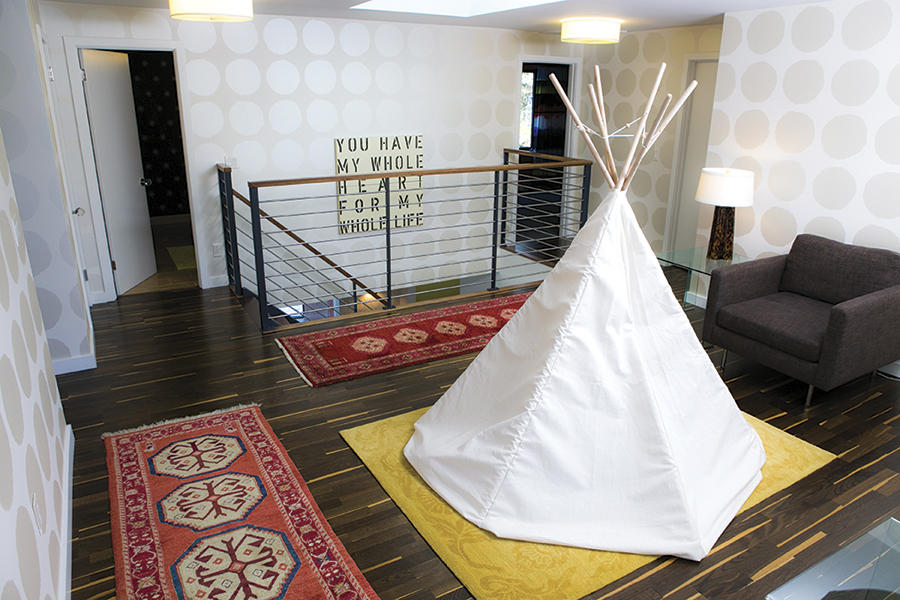 They moved in 2008 and lived in the home for three years before beginning its renovation, most of which was scheduled to take 10 months to complete. No sooner did they move into a temporary home than Wentz learned she was pregnant. The couple’s daughter, Marlowe, was born two days after they moved back into the renovated space in March 2012.

“We still had a huge punch list that was not complete,” says Wentz. “It was a really crazy time, but it was a good time, too.

“I think I’m drawn to this because of my business and what I do for a living. I work on so many traditional houses, and this is different.” 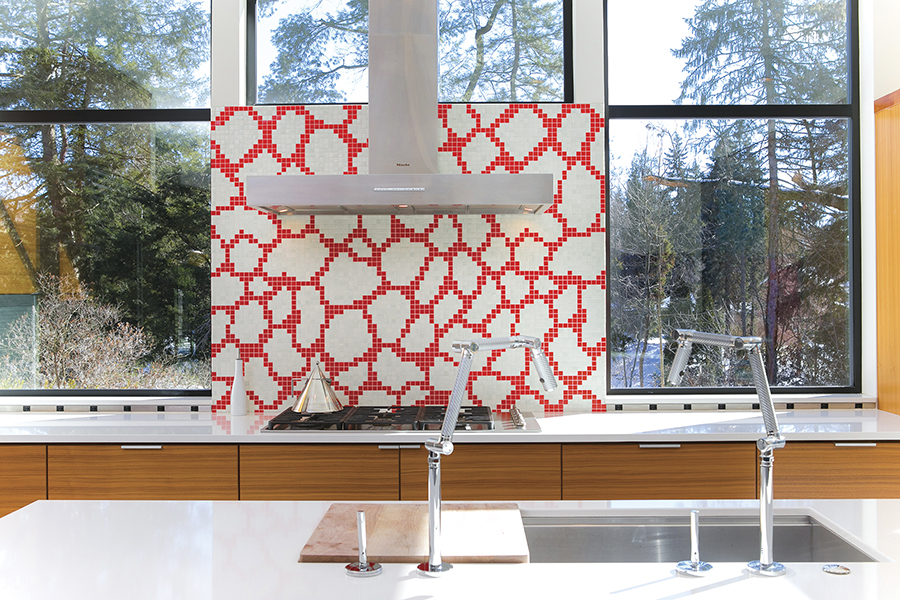 Even with its modern touches, the home is comfortable and suited to family life. A baby gate guards the staircase surrounded in granite ledgerstone that leads to a basement rec room. Sitting between the four bedrooms upstairs is a room containing a teepee for play; Wentz plans to make it into a study area with built-in desks. Three large kitchen islands provide lots of space for projects and homework.

The back entrance features seven multicolored lockers, each with an electrical outlet. One is assigned to each member of the family to help them stay organized.

“The kids love it,” says Wentz. “They think it’s cool to live in a different kind of house.” 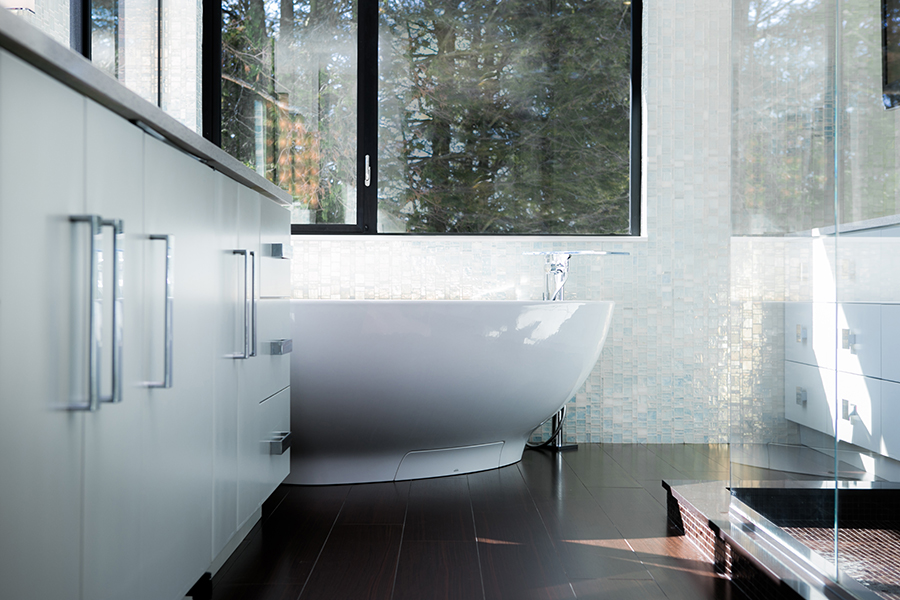 Although Wentz’s itch for new projects helped to get her family started with this one, she says she feels her family now is home for good.

“I think we’ll stay here,” she says. “There were some challenges, but it’s special because it does have a piece of what it used to be. It’s just our stamp on what was here.”

Stephen A. Glassman, president and CEO of the Design Center, has advanced degrees in architecture and art history from Brown and Yale universities. Before joining the Design Center in 2011, the award-winning architect was the principal of his own firm, Art and Architectural Design, for 25 years.

Professor Stephen Lee is the head of the Carnegie Mellon University School of Architecture and the track chair of the CMU Master of Science in Sustainable Design degree. He is a LEED-accredited professional and provides sustainable design consulting services in Europe, Asia, Canada and the United States.

Louis J. Talotta, of Shadyside-based Parke Interiors, Inc., has been an interior designer for more than 50 years and specializes in both residential and commercial projects. He is best known for his use of color and knowledge of period details; he says creating spaces that reflect his clients’ personalities and interests are his foremost concern.

This article appears in the March 2014 issue of Pittsburgh Magazine.
Categories: Best of Design