Home Is Where the Art Is

After decades of collecting, Jack Tomayko designs and builds an East End home that is a testament to his appreciation of art. 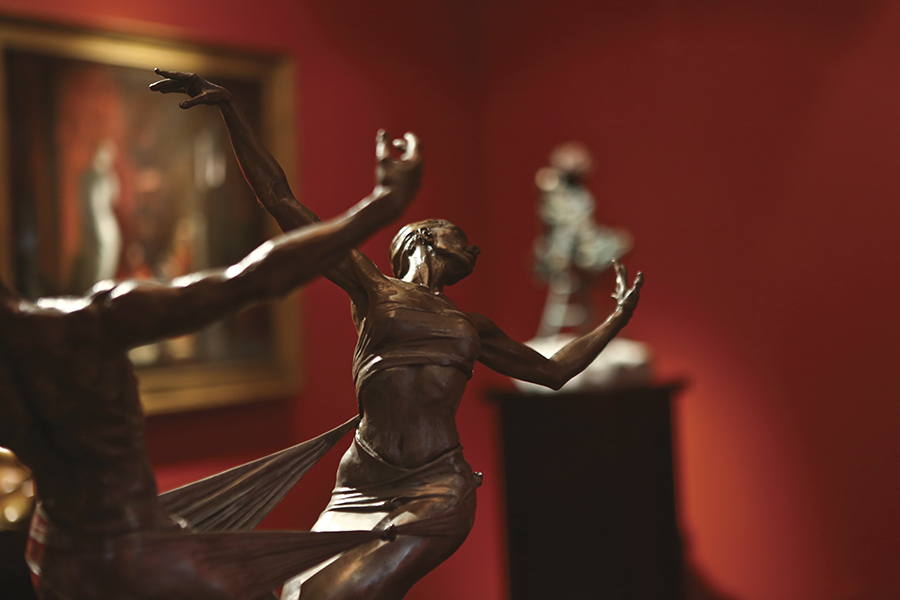 I n a third-floor room of Jack Tomayko’s home, two sturdy wooden benches offer prime spots for viewing the framed original paintings on the walls and the sculptures displayed on Amish-built pedestals.

The Pittsburgh entrepreneur has collected art for 30-plus years. He also owns a private gallery in Shadyside and hosts annual art shows at Point Park University, where he is a member of the board of trustees.

So including a personal gallery as well as additional space to display and appreciate art was a priority for Tomayko as he planned to construct the house in the East End where he and his partner, Martha Yannessa, have lived since 2011.

“Once you get [to] collecting, you become addicted,” he says. 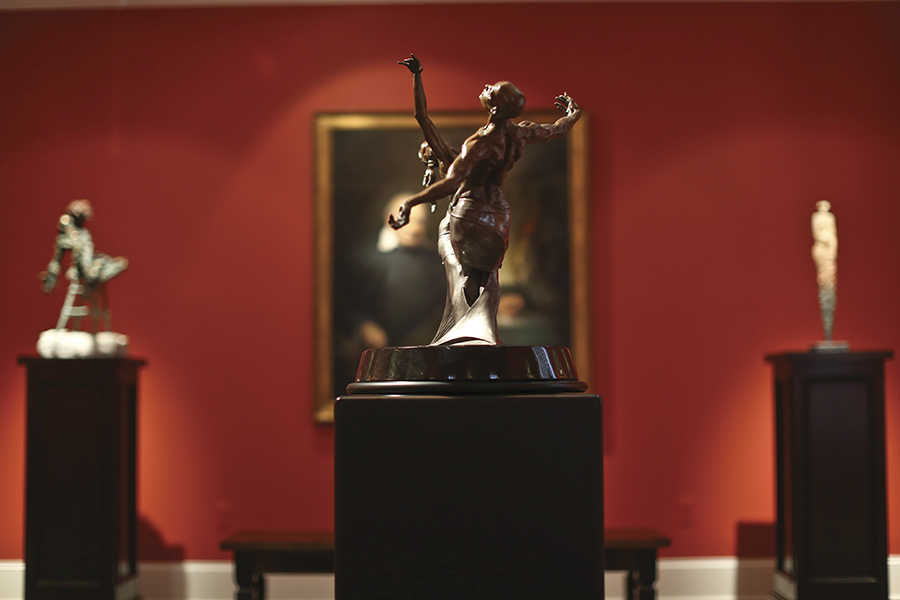 Linking the home’s four stories is a platform staircase, with each landing containing a few framed paintings. One landing also houses “Divine Milieu,” a clear acrylic sculpture by Frederick Hart. The work is part of a larger piece, “The Creation Sculptures,” made for the Washington National Cathedral in Washington, D.C. A turnstile pedestal depicts three figures being formed from the Earth.

The stairs lead down to a lower level that contains a small wine cellar — with another painting inside. Its iron doors inspired the model for the staircase railing crafted by Red Star Ironworks of Millvale. Tomayko says he also wanted the railing to complement a bronze sculpture — “Sisters,” by Gustavo Torres — at the bottom of the stairs.

“They tried to make it all work together,” Tomayko says of the contractor. “They’re pretty artistic.”

Tomayko previously lived in a house in Shadyside that now houses TomaykoARTS, a larger gallery where he displays items from his private collection as well as other pieces on consignment. When he planned to move, he knew he wanted to build a home that would be designed specifically to incorporate his art and other features, so he opted to tear down the frame house that stood on the property he chose. Primrose Homes of Harmony handled construction aspects of the project; architect John Francona from Astorino, downtown, was commissioned with the home design. Yannessa designed the home’s interior elements with consultation from Richard Barranti of Richard Lawrence Interiors in the Strip District. 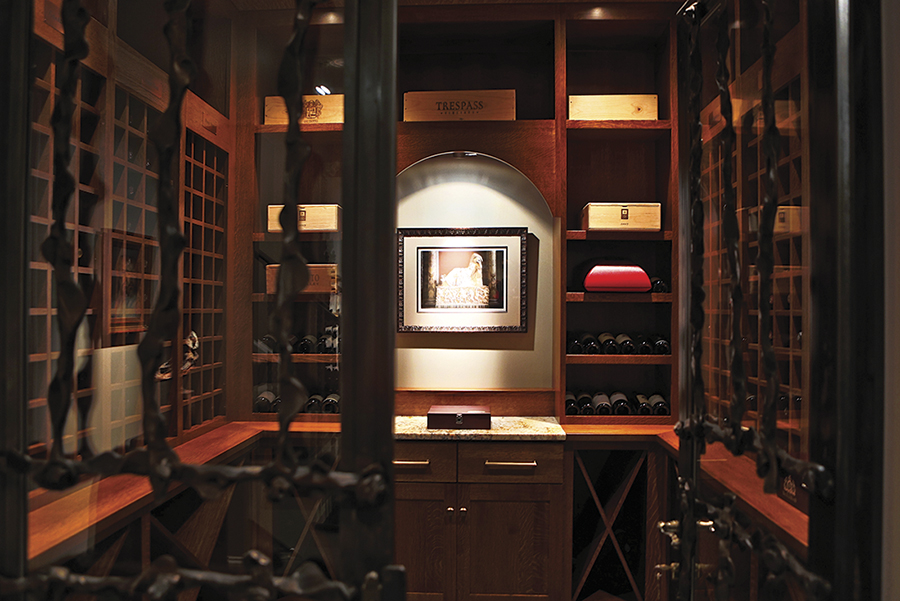 For the couple, some features of the design mattered more than others — the wine cellar, the gallery, a fitness center and an outdoor courtyard.

“I knew there would be art, obviously, throughout the house,” Tomayko says, noting that the contemporary design of the platform staircase complements the displayed art. “There’s an advantage when you build [from the] ground up.”

A Charleroi native, Tomayko, 63, is president and CEO of The Tomayko Group, a South Side-based network of integrated health-care companies. He says his regard for art developed in young adulthood as he wandered through the former Bondstreet Gallery in Shadyside and admired work displayed there. On each viewing, Tomayko says he discovered something new to appreciate, even in pieces he’d seen over and over again. It’s a joy he says he still derives from his own collection as well.

“You can collect cars. You can collect wine. But I think the nice thing about collecting art is [that] you can see it every day, and [what you see in it] changes,” he says. “[When] you look at something on a daily basis, you notice something different every time.”

His first acquisition was “The Anatomy Man” by mid-20th-century painter Frank Mason of New York. Tomayko purchased the piece in the 1980s after seeing it at Bondstreet.

“It really stood out for me,” he says. “[Mason] didn’t have good representation. He’s won lots of awards and commissions, but you wouldn’t see his work in very many galleries. He was known as a master teacher.” 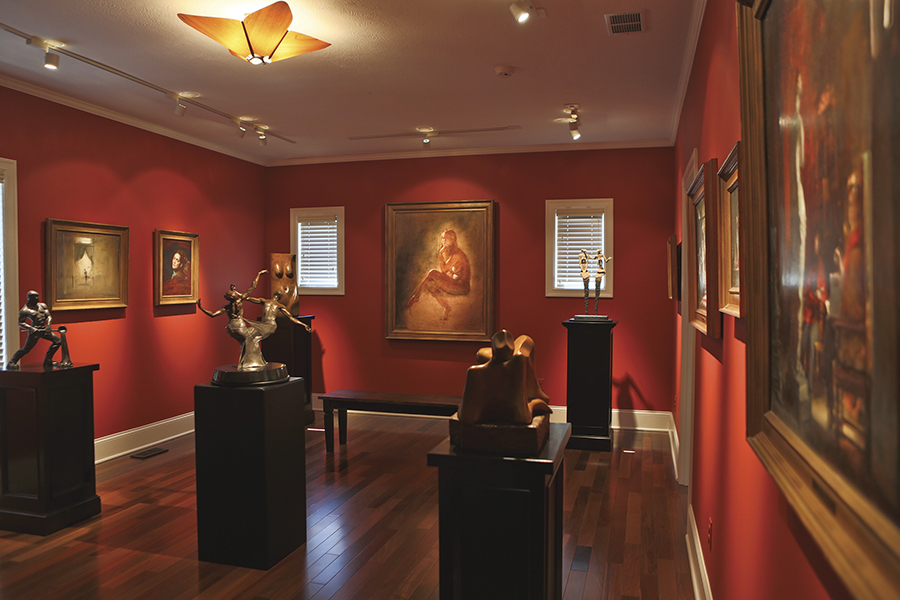 A few years after purchasing that piece, Tomayko attended an art convention in New York City, where the owner of Bondstreet Gallery introduced him to Mason and Mason’s wife, Ann. The couple invited Tomayko for coffee, and over time, they became friends. Tomayko says he and Yannessa often visited the painter’s studio in his fourth-floor walkup in Little Italy.

“[He played] the piano while you [walked] around, so [it was] a real engaging experience,” Tomayko says of the artist who died in 2009. “I was thrilled with his art.”

Tomayko says he enjoyed getting to know the Masons, adding that they were good contacts in the art world. They helped the budding collector to begin amassing works by offering him a payment plan on pieces he purchased from them.

Mason’s work in general consists of traditional scenes, landscapes, still-life compositions and genre portraits — as do most of the paintings in Tomayko’s collection. Tomayko also has a “fairly extensive regional collection,” and he says he appreciates that the mid-century American art encompassing most of his collection is “accessible” and “a little pricey, but not crazy.” 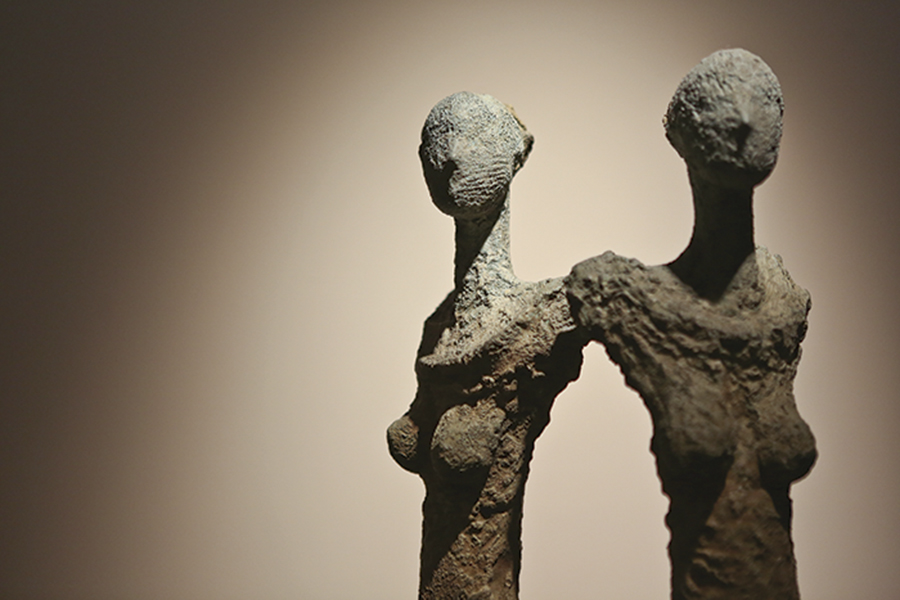 Mason’s work is featured almost exclusively in Tomayko’s home gallery, where clay-red walls offset the art. Around 15 of the 160 pieces Tomayko possesses are housed in the room. The remainder of his collection is distributed throughout his home in Pittsburgh and another home in Kiawah Island near Charleston, S.C., as well as at Point Park and at TomaykoARTS. A few pieces also are on display and for sale at the Inn on Negley in Shadyside, which one of Tomayko’s friends owns.

A few photographs hang in Tomayko’s guest bedroom, including “House, Furnace, Skyline,” by Mark Perrott. The striking black-and-white piece showcases Pittsburgh’s latter-day smokestacks in the foreground, with downtown glittering behind them. More Mason paintings hang opposite family photographs in the living room, while in the dining room pedestals display more sculptures by Bradley and Torres.

Tomayko stores some of his older paintings to make room for new works, but he says he likes to display as much as he can.

“I want to see them,” he says. “I’ve never understood why people have 2,000 pieces of art they’re never going to see.” 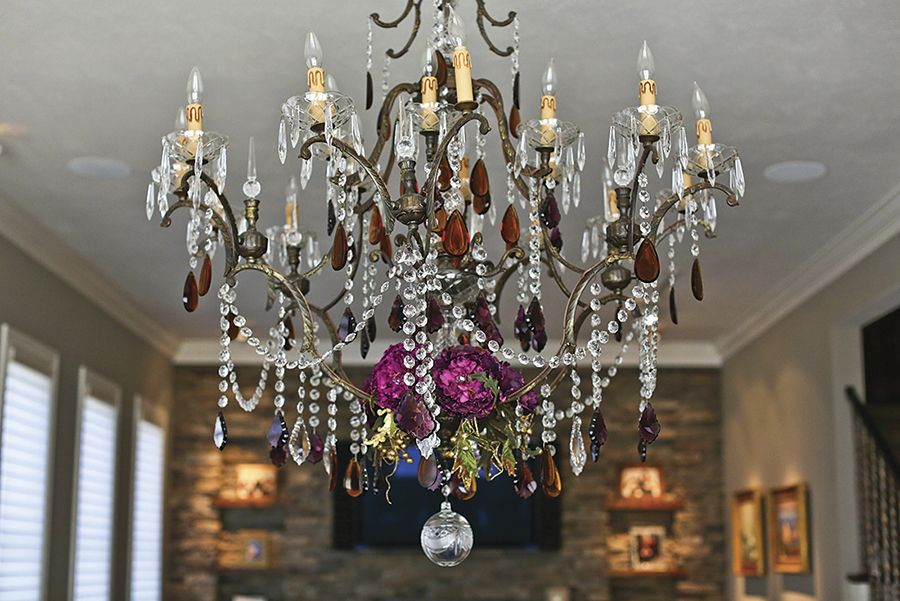 Tomayko formed a connection with Point Park in the 1980s when he served a graduate assistantship there through the University of Pittsburgh, where he pursued his Ph.D. in health administration. He has been the host of two to three annual shows in Point Park’s Lawrence Hall Gallery for about five years; the first featured Mason’s work. The most recent of those shows, “Visions and Revelations,” premiered in May with works from members of the National Association of Women Artists. In the fall, Tomayko showcases a solo exhibitor.

At the entrance to the gallery is the sculpture, “Freedom Bound” by Paige Bradley, which Tomayko donated to the university around six years ago.

“I think the university would say it’s been a very nice complement,” he says. “It’s good for the students and the community.”

When it comes to his home, the collector acknowledges that he’s paid more attention to displaying his art than the rest of the décor, but that’s what has made him happiest.

“An interior designer would have a whole different opinion,” he says. “But me, I’d rather see the art and not worry about the color of the couch.”

Tomayko’s advice for building around an art collection: