Not every appliance store can claim its own chef. At Don’s Appliances, Anthony Marino will show customers what the latest products can do. 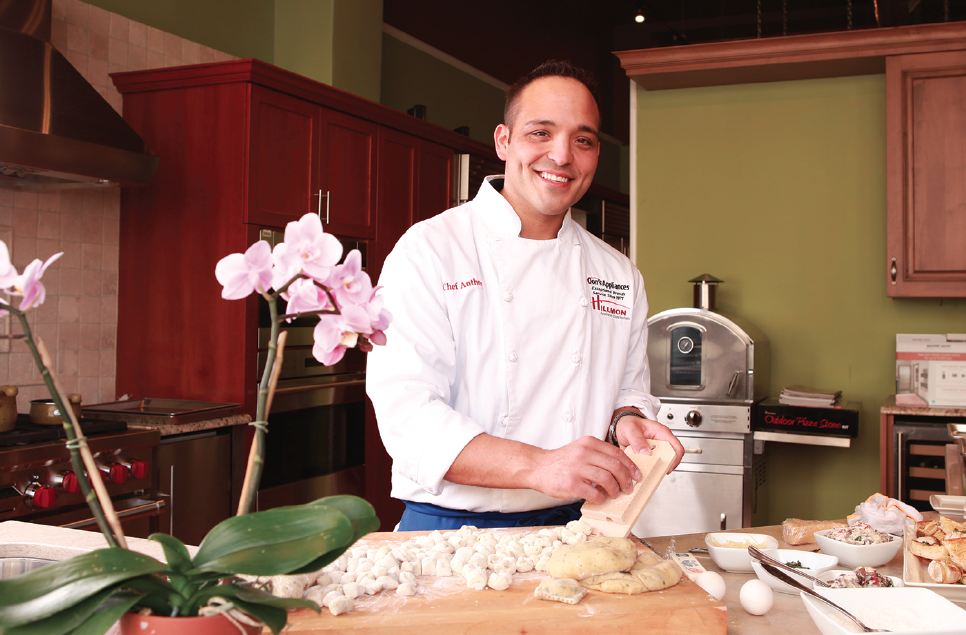 Anthony Marino uses a convection and steam oven to bake (rather than boil) ravioli, which both steams and browns in the appliance. The dish cooks in less time than it would in a conventional oven. Native Pittsburgher Anthony Marino, a graduate of the Culinary Institute of America, is the corporate chef at Don’s Appliances, cooking up demonstrations and classes in the stores’ fully operational kitchens.

“My job is to demonstrate our various products to the client before [and even after] they buy them,” he says of his role, which he took on full-time in August.

Products he works with include steam, induction, convection or standard ovens, as well as gas griddles, teppanyaki grill pans and coffee pots. "More people want to see these in use before they buy, almost like buying a car,” he says. “Say you purchase an in-wall oven with rotisserie but aren’t sure how to use the rotisserie part.” One of the newer products for residential kitchens is the steam and convection oven, which Marino says he loves to employ for multiple purposes. Among its uses:

Bake a cake. Marino gave one of his latest creations the nickname “steam cake” after experimenting with a chocolate cheesecake recipe in the oven; it baked in 50 minutes. “It had a huge rise and a great texture,” he says.

Reheat food. Any food can dry out when reheated in a microwave, but Asian food, especially rice and chicken, is especially susceptible to that problem, Marino says. In a convection oven, the steam brings moisture back to the food, readying it for second-day helpings.

Versatility. It’s possible to do an entire six-course meal in the ovens without transferring flavors, Marino says, noting you can sear steaks, bake bread, simmer sauces and even keep plates warm in separate compartments at the same time.

This article appears in the April 2014 issue of Pittsburgh Magazine.
Categories: HOME + Design