PittGirl discovers why the famous female aviator made an unplanned stop here. 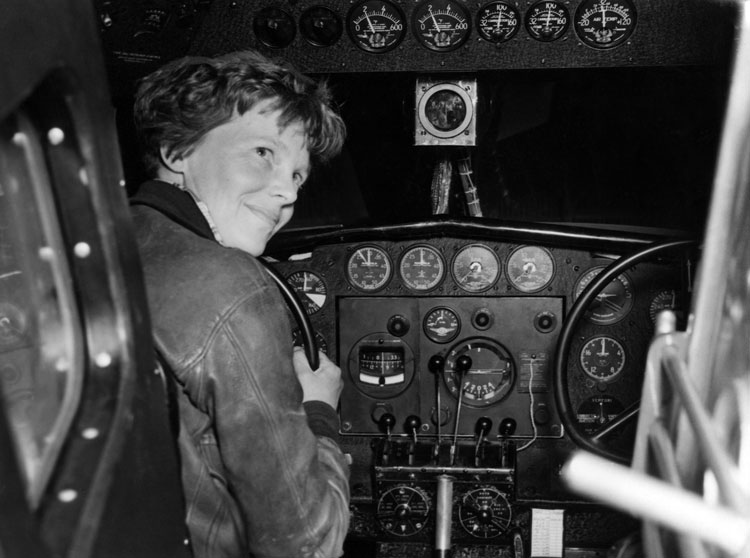 Each time I visit the Carnegie Science Center’s miniature train exhibit, I discover something new. I’m one of those annoying visitors who doesn’t just soak in the big picture — the seasons, the water, the hills, the lights, the speeding trains. No, I STUDY. I study the details. The little couple dancing on the porch. The woman using a stick to beat the dust out of a rug hanging on a clothesline. The baseball player sliding into second base at Forbes Field. The dude who is ill-advisedly about to jump from a high cliff wearing paper wings. (RIP, that dude.) The people riding the Whip cars at Luna Park. The dude who is very shocked that the outhouse door flew open while he's occupying it.

My most recent visit to the railroad display was the first time I took a moment to read the placard describing Rodgers Field, the grassy airfield represented in the exhibit. I never really paid attention to any mention of Rodgers Field. Never heard of it, even.

I love Amelia Earhart. As a child, teen and young adult, I was an air-and-space fanatic, and everything about the late Amelia Earhart spoke to me. Her style. Her hair. Her eyes. Her smile. Her bravery. Her belief in the power of women. Her unwillingness to let being a woman dictate the choices she made or the accomplishments on which she set her sights. Amelia Earhart. Badass.

This particular flight to Pittsburgh took place Aug. 31, 1928, nine years before she would disappear, four years before her solo transatlantic flight and just two months after becoming the first woman to be flown across the Atlantic. She was 31 years old, and she had decided to take a vacation after writing her book “20 Hours, 40 Minutes.”

She was flying a plane she purchased from “Britain’s Lady Lindy,” Lady Heath, and was accompanied on the first two legs of the flight by George P. Putnam, the man who would become her husband just a few years later. At the time of this particular flight, however, Putnam was married to another woman but was spending lots of time with Amelia because he was her publisher.

Back to the flight.

Amelia landed her plane at Rodgers Field, which basically was a grassy pasture at that point in time. Initially, Amelia’s landing was “perfect” — but then, well
. . . take a look at the report that ran in the Pittsburgh Post-Gazette on Sept. 1: 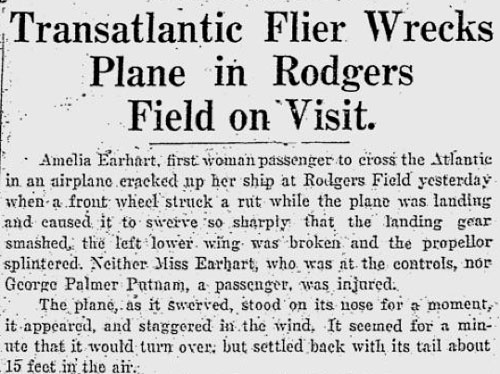 There’s even a picture, showing what looks to be Amelia checking out the damage: 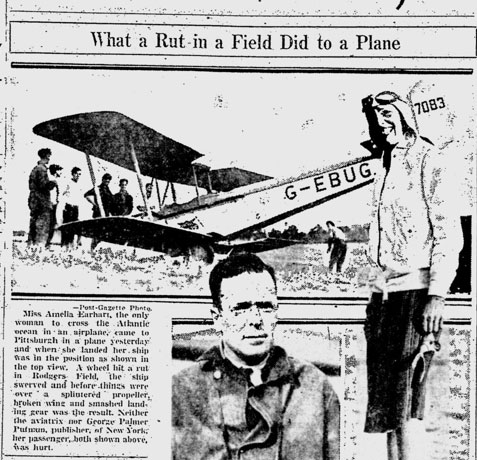 While talking to the local press about her accident, Amelia maintained a sense of humor. According to the Post-Gazette, on a previous visit to Pittsburgh (I’m assuming this one from a few months earlier), Amelia was given a key to the city, and she said at Rodgers that she wished she had been given a bridge over the rut instead.

Oh, Amelia. If there’s one thing Pittsburgh has a lot of, it’s bridges.

Luckily the plane was repaired quite quickly — record speed, in fact — and Amelia continued on her vacation, heading to Ohio and then onward across the country.

Did you know Amelia didn’t plan to land in Pittsburgh? Nope. She actually was heading toward Cleveland.

“She was so impressed with this city from the air that she decided to land here.” (Click here for a look at the Golden Triangle close to this time.)

I always knew I liked that lady.

I’m getting that on a shirt.

This article appears in the January 2015 issue of PittGirl.
Categories: PittGirl