Historic Men on an Ordinary Roadtrip Through Pittsburgh

Following the trail of the Vagabonds, a quartet of prominent travelers who journeyed to Pittsburgh and beyond. 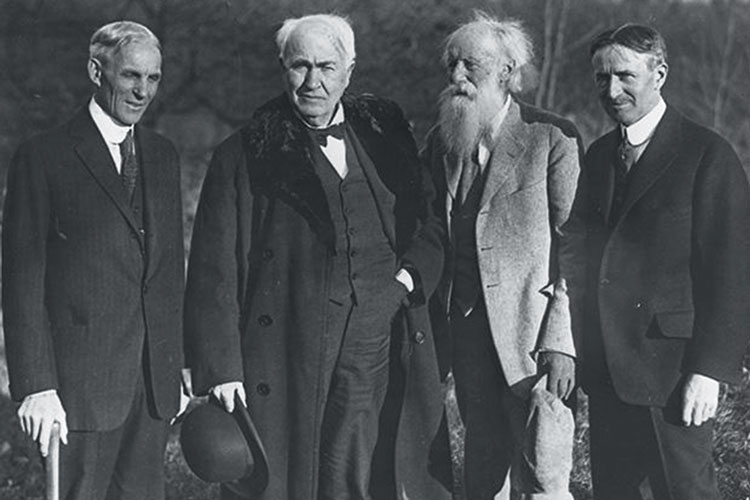 Ninety-nine years ago, a group of prominent Americans met in downtown Pittsburgh to begin a slightly goofy journey. The inventor Thomas Edison, then 71, and the bestselling nature-writer John Burroughs, a spry 81 with a full white beard, had already travelled 400 miles in two days in a Packard touring car on the relatively new Lincoln Highway. They had spent Saturday night in the classy Fort Pitt Hotel at Tenth Street and Penn Avenue.

On Sunday, Aug. 18, 1918, the innovative automaker Henry Ford, then 55, and the rubber king Harvey Firestone, 50, arrived via train from Columbiana, Ohio, where they had spent two days at Firestone’s home.

These four successful and prosperous gentlemen called themselves the Vagabonds. They and their crews made an annual automobile excursion together — camping and “roughing it” (in their own well-to-do way), as they drove through different parts of America on mostly unpaved roads, seeing small towns and enjoying nature. It started with a 1914 trip into the Everglades, then a drive along the West Coast in 1915; a jaunt through the Adirondack and Green Mountains followed in 1916 (no trip was made the following year). This 1918 road trip would venture south into the Great Smoky Mountains.

Burroughs documented their somewhat-improvised itinerary. As a naturalist, he wrote frankly: “Pittsburgh is a city that sits with its feet into or very near the lake of brimstone and fire, and its head in the sweet country air of the hilltops. I think I got nearer the infernal regions there than I ever did in any other city in this country.”

The group didn’t leave Pittsburgh until late afternoon, so they didn’t get far before looking for their first night’s camping spot. They found it about 2 miles east of Greensburg at a grove of oak trees known as Miller’s Woods.

The group shot rifles at the Greensburg camp and discussed the Great War: “Not much of the talk that night around the campfire can be repeated,” Burroughs wrote, “but it gave us an inside view of many things we were curious about. … How could we help freeing our minds about the Huns?”

The next day, the Vagabonds headed south on the road we now call Route 119. They soon developed problems with one of the cars, with fan blades cutting into the radiator. Things looked bleak when they got to a garage-and-blacksmith shop in Connellsville, where mechanics thought they would have to send for parts — until Ford himself fixed things well enough for the caravan to continue.

When they stopped southeast of Uniontown at the Summit Hotel, they decided to spend the night. The Vagabonds all signed the hotel’s registry; that famous page has been copied and framed and still hangs outside the Wunderbar in the hotel’s beautiful vintage lobby.

Once they left western Pennsylvania, things went relatively smoothly through to Asheville, N.C., where they spent the night on Aug. 27 at the grand Grove Park Inn.

Burroughs caught a train home from there, and the remaining Vagabonds drove north to Hagerstown, Md., where the 1918 trip ended on Aug. 30.

Later, Burroughs wrote, “What beauties and wonders we saw! What glory of mountain tops and what summer ripeness and repose in the broad river valleys! How such a trip enhances one’s knowledge of, and admiration for, his country!”

The Vagabonds continued their road trips into the mid-1920s, teaching Americans about the joys of auto-touring and camping.

This article appears in the October 2017 issue of Pittsburgh Magazine.
Categories: Rick Sebak