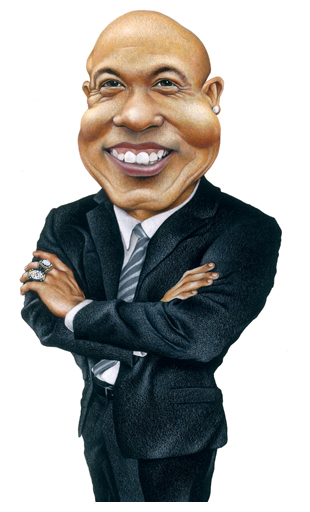 Hines Ward’s life off the football field has never been dull. He showed off his footwork on “Dancing with the Stars,” joined up with some zombies on “The Walking Dead,” and now the retired Steeler great is preparing to take on a 140.6-mile IRONMAN race in Kona, Hawaii, next month.

The IRONMAN World Championship is not for the faint of heart. It’s a 2.4-mile, open-water swim; a 112-mile bike race in winds of up to 60 miles per hour; and a marathon (26.2 miles) that must be completed in 17 hours.

But then you have to consider that Hines Ward was a Super Bowl MVP.

But he still needed some training. Back in February, Ward couldn’t run more than a mile. Seven months later, and 30 pounds lighter — less than he weighed in high school — he’s ready for the Oct. 12 competition.

An online documentary series will air video of his training process, and NBC will also be following his race, with a plan to air it in November. On race day, IronmanLIVE.com will broadcast the event. Catch Ward at one of those times to view him in the “Super Bowl of Triathlons.”

Want more? Don't miss our interview with Ward. He talks retirement, sacrifice and — of course — the Ravens.

#Art: Looking for Theater in the Unlikeliest Places

Pittsburghers are generally pretty great about finding under-used spaces and making them better. The team behind “Unlisted: Second Steel” aren’t all ’Burghers, but they know a good bit about awesome stuff in unlikely places.

Produced by locally born theater collective Yinzerspielen, Unlisted will perform three original works this week at a trio of nontraditional sites: a pair of adjacent lots in the Hill District, TOWNHOUSE in East Liberty and a North Side parking lot. The performances, each by an international team of artists, will explore the way we — both as ’Burghers and, you know, humans — use our urban spaces.

This is the second “Unlisted;” the project debuted a year ago in Belgrade, Serbia. The shows, which run from tonight through Saturday, are free and open to the public. Get the exact showtimes and locations here.