Gem tones, brass finishes, luxurious velvets and colorful leathers are some of the hottest styles to come out of the influential furnishings trade show High Point. Oh yes, and the ’70s are back. 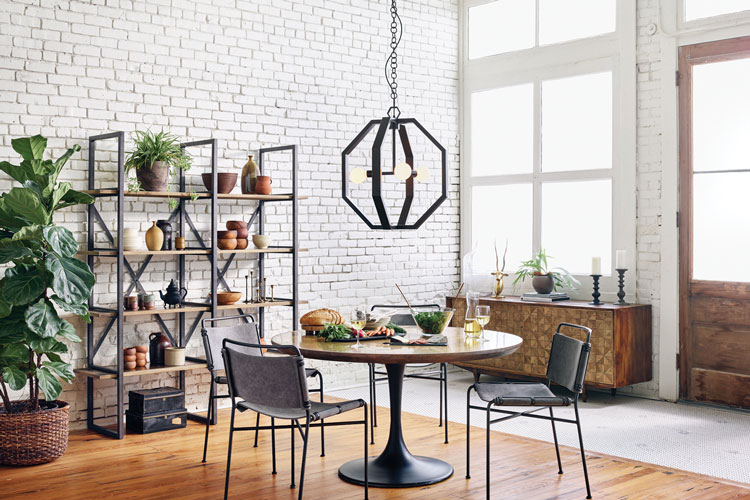 Unusual pairings, such as deconstructed elements partnered with more elegant details, were a major trend at the October market. PHOTOs COURTESY MARIE flanigan​

When it comes to the High Point Market furniture shows, experts say it’s always best to expect the unexpected. As Houston-based interior designer Marie Flanigan notes, raw materials met polished ones, bright colors sidled up to moody tones and deconstructed elements were united with those that are more highly refined.

“The combination of really different textures was key at this market,” says Flanigan, who acted as a 2016 “Style Spotter” at the markets. “I’ve been telling my clients, you can create this trend by mixing materials within your own room. If you have wood and leather, you could bring in new material such as plaster or metal.” 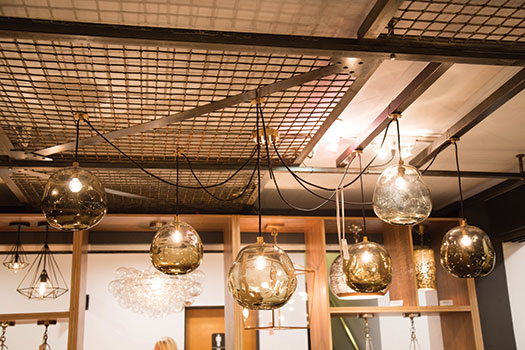 Held twice annually — in the spring and in the fall — the High Point Market regularly attracts more than 75,000 visitors to High Point, N.C. for the largest furnishings-industry trade show in the world. On display at the event are cutting-edge home products from more than 2,000 vendors representing more than 100 countries.

Much like Fashion Week in New York City, the furniture show serves as a harbinger of the latest home trends and colors that soon will be popping up in décor stores (and living rooms) worldwide.

Pittsburgh Magazine looks at some of the biggest trends to come out of the October market. 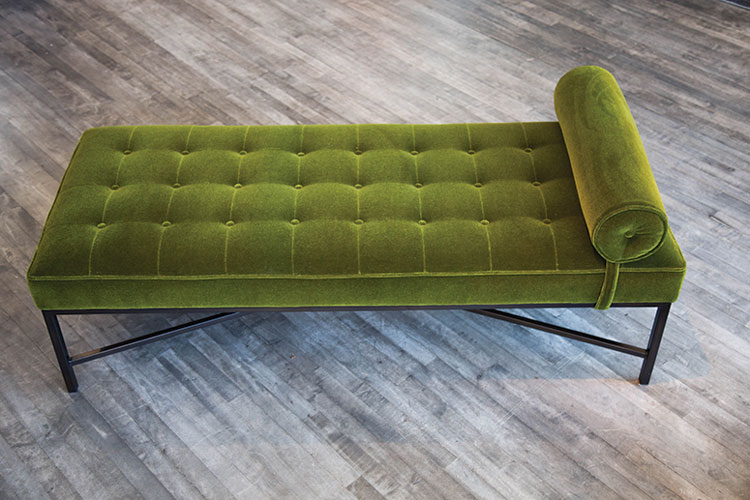 Flanigan, who heads Marie Flanigan Interiors, says she noticed lavish metals, luxurious fabrics and saturated hues such as lily-pad green and indigo blue throughout the market.

“Although I’ve been thoroughly enjoying the company of a neutral color palette and raw, organic textures, it was a joy to see that sultry gem tones and lush fabrics and finishes are continuing to make themselves comfortable on everything from furniture and rugs to lighting and wallpaper,” she says in her winter Style Report.

Stacy Weiss, president and owner of Weisshouse in Shadyside, agrees indigo is one of the strongest color trends to emerge from the market.

“We saw it on sofas, in denims, navy leathers, flat-weave striped carpets and lamps, on both vintage and new designs,” she says. 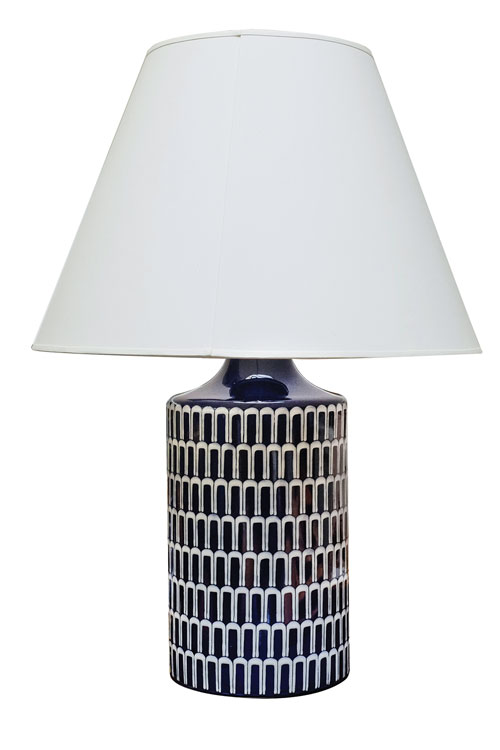 As has been the trend in the last few markets, neutral greys still are a popular hue, says Rachel Lenchner, an interior designer at Today’s Home and Designer Furniture Outlet, which has locations in Ross Township and Scott Township.

Pink is continuing to have its moment, and Lenchner says the dusty rose and soft purples hues nicely complement the prevalent grey. In particular, she loved a glamorous light pink leather sofa from Century Furniture. Colorful leathers, she adds, were another High Point trend. “It was so fun to see,” she says. 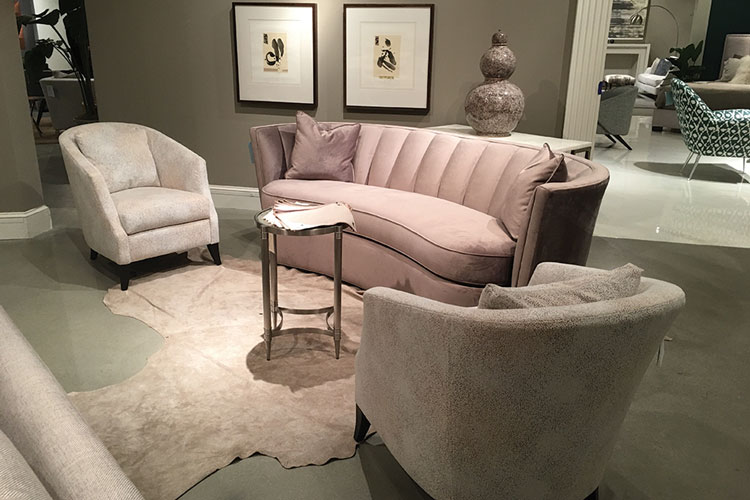 Los Angeles-based lifestyle blogger Anne Sage says chartreuse brought a welcome pop of color to the market, appearing on everything from accent pillows to velvet upholstery.

When joined with whites or brights, chartreuse appears pretty and preppy, Sage says. The startling greenish yellow also was paired with deep peacock blue, magenta and rust — color combinations Sage says are reminiscent of the 1970s. 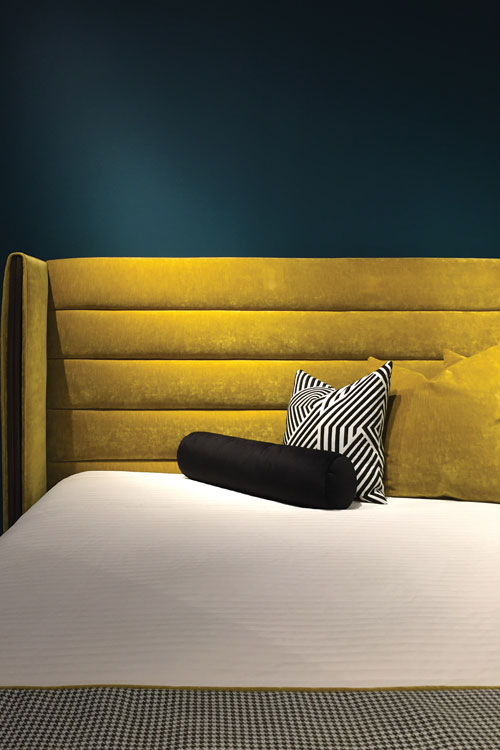 Yes, the ’70s — and the ’80s — have returned with all of the decade’s grooviness, and less of the cheesiness.

“They’re back,” Sage confirms. “I didn’t expect to like it but I really, really love it.”

Some of the ’70s styles on display were low-profile sofas and chairs, which necessitated low-slung accent tables and lighting. Bold furniture silhouettes, another ’80s throwback, were found throughout the market, Sage says. 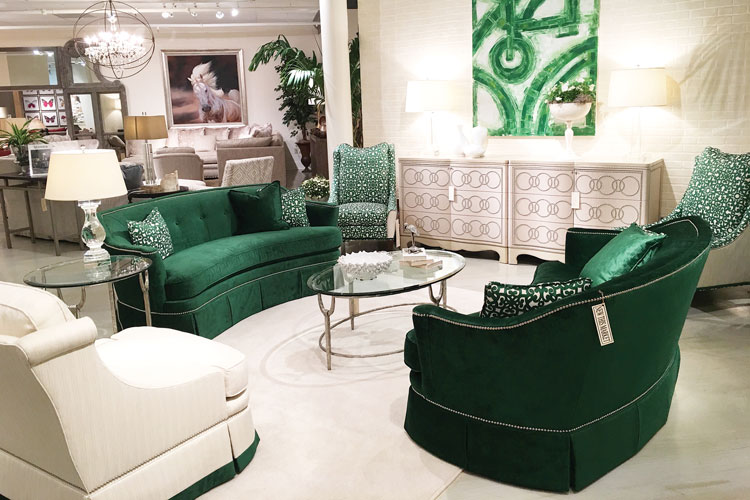 STYLES FROM THE 1970S AND ’80S, SUCH AS BOLD FURNITURE SILHOUETTES AND LOW-PROFILE SOFAS ARE MAKING A COMEBACK. PHOTO COURTESY TODAY’S HOME

Also making a comeback are floral patterns, but these aren’t the old-fashioned, tiny prints favored in the ’80s. The new florals, taking influence from Rifle Paper Company, are big and bold, Flanigan says.

“The way they’re doing large-scale florals is really fresh, in almost a painterly way,” she says. “I just did this amazing headboard in a large floral and it was so modern.”

“The circle trend was sort of a component of a larger trend that I saw, which was a move toward a pure and simple form,” she says. 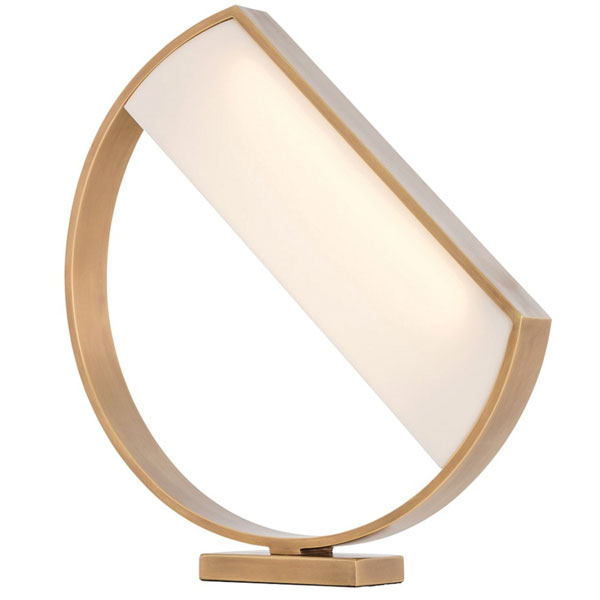 Weiss says small geometric shapes were on display throughout the market, appearing on everything from lamps and pillows to sofas and rugs.

“We bought some fabulous geometric indigo boxes, shibori print-inspired ceramic lamps and bold, striped flat-weave rugs by Ralph Lauren, which are both classic and on trend,” she says. 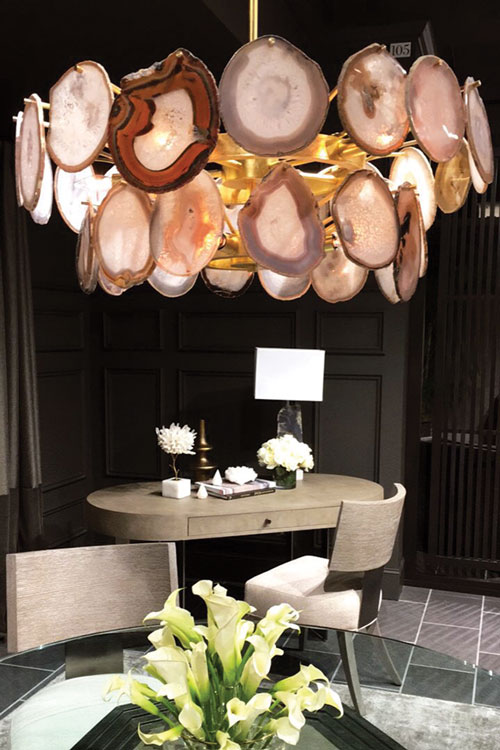 Brass, natural elements and velvets were among the most popular materials employed in pieces shown at High Point. PHOTO COURTESY TODAY’S HOME

If you’re thinking about switching up your bathroom or kitchen fixtures, or adding a new lamp, step away from the chrome. Weiss says brass was the way to go at the show; Lenchner says chrome and gold were joined by mixed metals and brass. Weiss says she adores metal lighting fixtures by noted designer Kelly Wearstler, many featuring brass elements.

If you really want to add a natural but still sparkly piece to your living space, Lenchner says geodes, including a chandelier made from the crystal-lined rock, are on trend. Weiss adds natural elements popped up in every showroom.

“A mix of raw edge and modern silhouettes were found in marble, stone, granite, river rock and quartz,” she says. 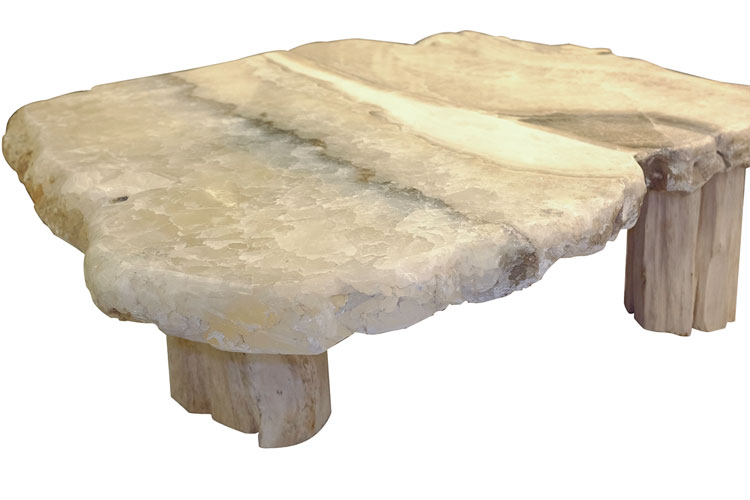 Also fashionable at the fall show were luxurious velvet materials and accent tables and chairs with clear acrylic legs. One of Lenchner’s favorite pieces: an acrylic bedroom set from Bernhardt.

“That was really stunning,” she says.

This article appears in the January 2017 issue of Pittsburgh Magazine.
Categories: From the Magazine, HOME + Design, Hot Reads