Hidden in Plain Sight: A Modern Haven of Glass

A former motor-repair shop is transformed into a spacious two-story home in the South Side. 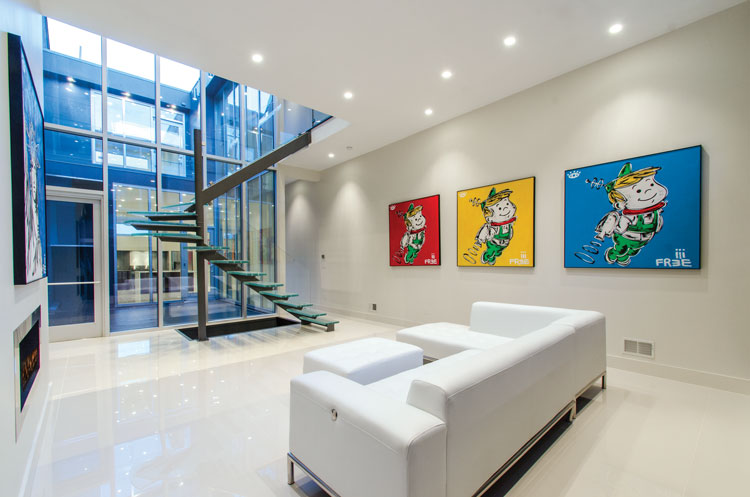 The atrium and a steel-and-glass staircase are the centerpieces of the open, airy structure/ Photos By Michael Haritan

Mark Frankovitch emerges from the cellar doors on the corner of 18th and Sarah streets in the South Side of Pittsburgh. He dusts off his calloused hands against his work pants.

“That’s quite an entrance, huh?” he says.

He stands in front of two buildings of opposite styles: one, a classic, pre-World War II building Frankovitch is renovating; the other a renovated home of modern, minimal design.

Before its makeover, the home at the intersection of 18th and Sarah was a single-story garage that once was part of an electric motor repair shop adjacent to a hotel and bar. The garage had been vacant and boarded up for 30 years before Frankovitch discovered it. 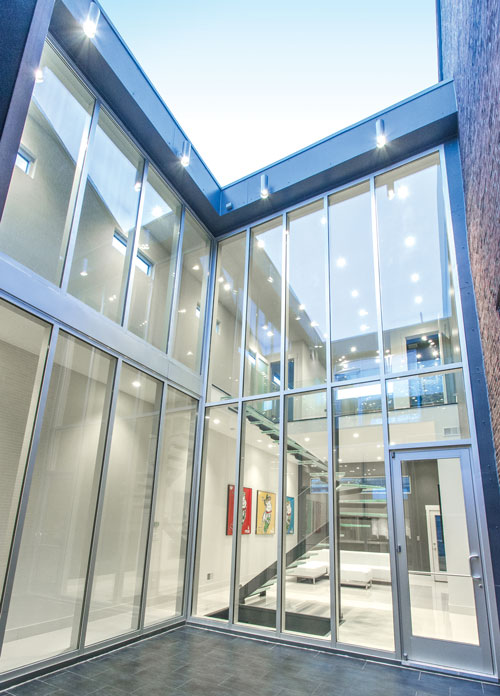 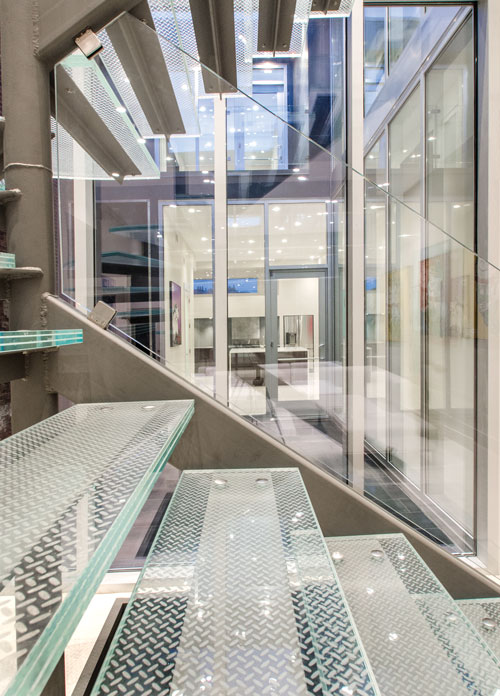 Walking through the breezeway, visitors are welcomed by a flood of natural light streaming from the glass atrium in the middle of the space.

Two and a half years ago, the former realtor purchased the property with the intention of restoring the hotel and bar to its original beauty. He now is working on historically accurate renovations for that building.

He didn’t know what to do with the garage next door, though. He considered tearing it down, using it for parking or simply selling the structure and the land it occupied. Eventually, he decided to renovate the garage into a modern two-story, single-family home, now for sale for $669,000 through Millcraft Real Estates Services.

With its slim exterior, the building exudes a sense of mystery. Passersby may wonder what’s behind this rather intimidating front. But anyone who enters through the stone-and-steel breezeway is welcomed by a flood of natural light streaming from the glass atrium in the middle of the home.

The atrium and a steel-and-glass staircase are the centerpieces of the structure. Featuring three two-story glass walls, the courtyard is open to the elements. Although it’s 2,800 square feet, the house feels much larger — open and airy due to so much natural light.

The ground floor holds a two-car garage and a basement room that could double as a second master bedroom with a cozy outdoor courtyard and gas fireplace. Upstairs, the atrium connects the kitchen and living room, which features a fireplace and outdoor balcony. 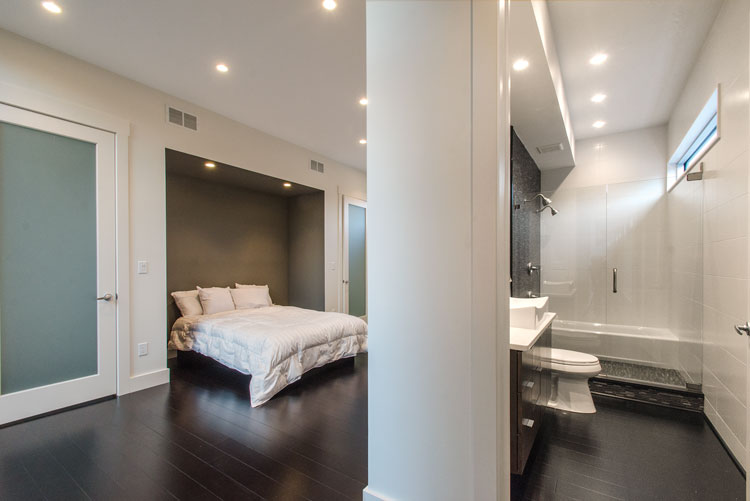 It’s a house filled with contrasting ideas: the warmth of the fireplace against the cool, crisp walls; the rigid steel facade against the spacious floors. Frankovitch says this aesthetic played a part in his decision to buy the original building and garage.

“I’m restoring the building next door with a more traditional front, so it’ll contrast with the super-modern front of this one,” he says. “I just saw those two, and I envisioned the whole thing.”

The garage, the glass atrium and the entire first level are equipped with heated floors, adding a cozy feel while preventing ice or snow from accumulating in the courtyard. You get all of the freshness of being exposed to the ice and snow but none of the hassle, Frankovitch says. Glass walls also cover the center of the second floor, which holds the master bedroom, a full bathroom and walk-in closet, as well as a space Frankovitch envisions as a small office. 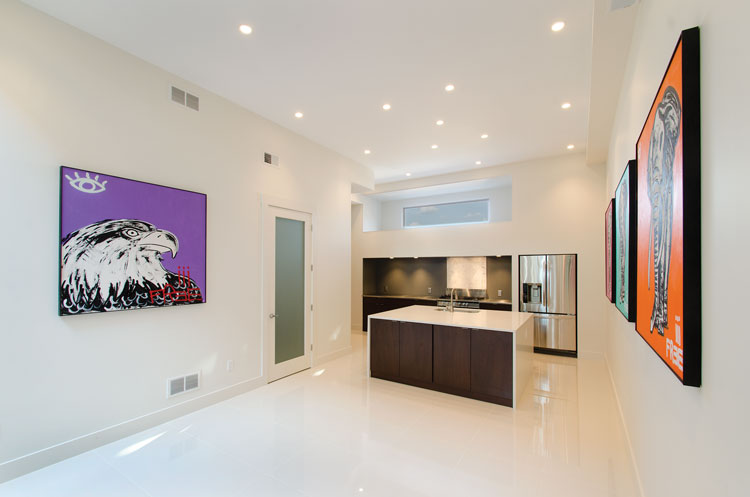 Except for the glass walls, every window in the house is slim and horizontal, preventing any interaction with the busy intersection outside.

“I wanted to have something where you still have the outdoor space but you have the privacy within the walls,” Frankovitch says.

As is, the house is partially furnished and decorated with artwork by Baron Batch, a local artist and former running back with the Pittsburgh Steelers. Batch created every piece in the house to complement the space, Frankovitch says.
​ 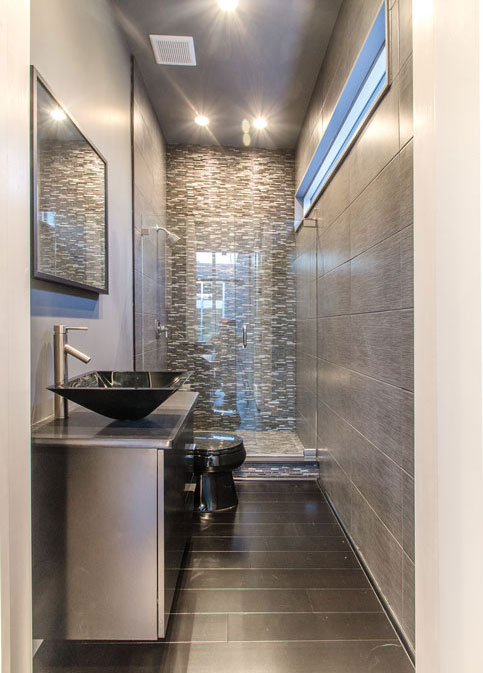 Frankovitch, 33, has lived in Pittsburgh for more than 10 years. He initially worked as a commercial realtor after earning a master’s degree from the Donahue Graduate School of Business at Duquesne University; later, he moved into development. At this point in his career, Frankovitch has built and remodeled about 15 different projects, ranging from restaurants and offices to houses and apartments. With each new property, Frankovitch draws and designs the renovations himself, then employs a small group of workers to help with the manual labor. It usually takes his team a year to renovate each building, he says.

In addition to the old hotel next door, he is working on transforming a former car wash into a taco shop in Toronto, Ohio, across the Ohio River from Weirton, W.Va., where he grew up.

“I could do this endlessly,” he says. “Each house builds like a resume.” 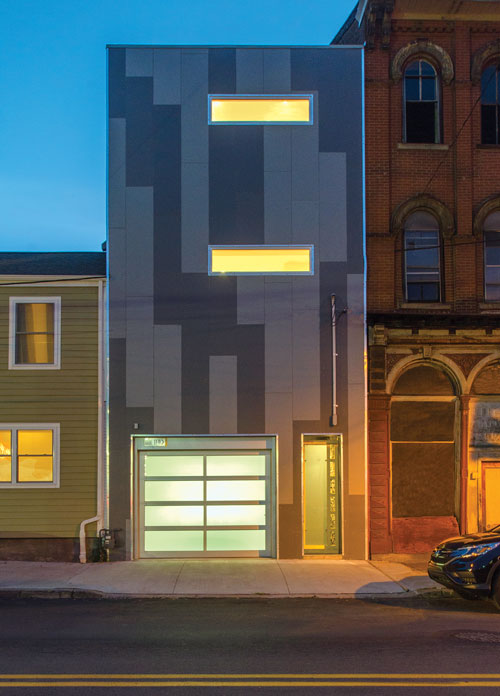 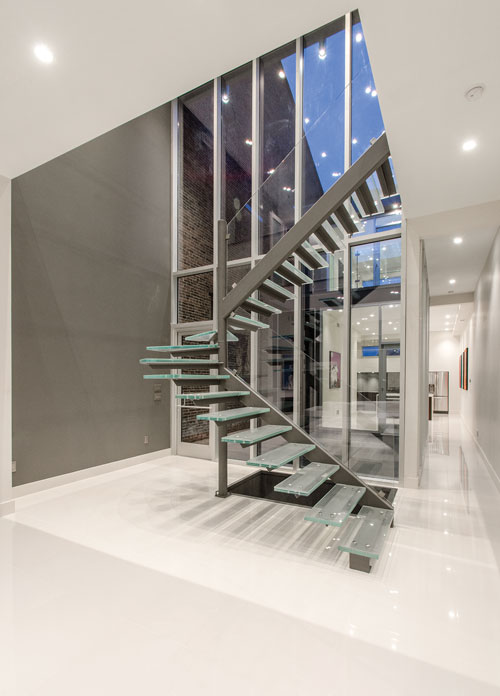