Stephen Smith knows how artificial intelligence will speed up your commute. 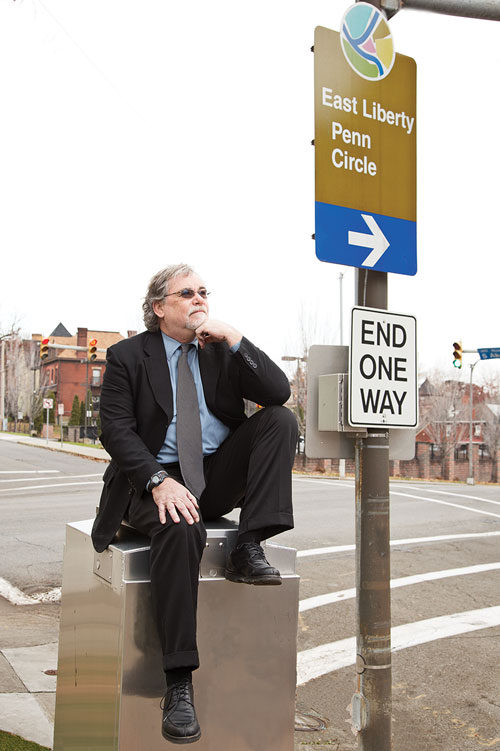 About six years ago, Stephen Smith was stopped at a traffic light in East Liberty, driving home from Carnegie Mellon University. The robotics professor had been working over a tricky problem — how to make urban traffic flow more efficiently. Computer simulations showed his proposed system worked, but he needed a place to test it amidst aggressive drivers, slow buses and errant pedestrians.

And then he saw it: At the traffic light, mounted on a pole, was a camera.

Smith, 63, had no experience as a traffic engineer — he had spent his career working on technologies for automated warehouses, manufacturers and other uses. But he had been pulled into the Traffic21 Institute at CMU, initially funded by the Hillman Foundation in 2009 to make Pittsburgh a hub for intelligent transportation. The Hillman grant helped to pay for 12 projects, including real-time bus-arrival tracking with the Port Authority of Allegheny County, a parking app and vehicle sensors to detect road conditions.

Developing the adaptive traffic lights Smith had in mind was one of the more complicated projects. Conventional traffic-light systems are pretty straightforward. An engineer does a short study to assess traffic flows, builds a system of traffic phases and puts it online. Unless a police officer assumes command at the corner, the system is locked for average conditions.

But such systems can fall wildly short in non-average traffic, so Smith and his team installed computers that were capable of assessing traffic and adjusting on the fly at nine East Liberty intersections. If cameras saw a backlog of cars, computers could allow a green light to linger for a few extra seconds; if no one was turning left, computers skipped the left-arrow phase entirely.

The system helped reduce travel time through those intersections by an average of 25 percent, according to studies conducted by Traffic21, which turned the system on and off at different times of day.

“It’s not because you’re driving faster but because you’re stopping less and not stopping for as long,” Smith says. The system now includes 50 lights, running from Penn Avenue at Bakery Square into Oakland on Baum Boulevard.

Smith subsequently spun off a company, Rapid Flow Technologies, from CMU and licensed the technology he and his research group created, dubbed “Surtrac.” The company is receiving part of a recent $10.9 million federal grant to add another 150 lights to the system, including some Downtown.

“We’re trying to see what we can get out of the tech in the short term,” Smith says. Eventually, he envisons consumer vehicles outfitted with radios to transmit their locations, as well as potential routes, to traffic lights. Armed with both, an adaptive traffic system would make the flow even more efficient, he says.

With the rise of automated vehicles, Smith thinks the need for smart traffic systems will only grow. “A lot of people claim either rightly or wrongly that we will see less vehicles on the road. I’m not so sure I believe that; there will be less need for parking. But congestion is not going to go away — more and more people are moving to the city.”

This article appears in the January 2017 issue of Pittsburgh Magazine.
Categories: Community Feature