Here Comes the Groom: Terrific Wedding Style Ideas for Him

How can grooms show their personalities on their wedding days when they’re usually confined to two choices: tuxes or suits? We rounded up some stylish Pittsburgh grooms for inspiration.

When it comes to bridal style, women have lots of opportunities to make their looks their own. A bride’s taste can shine through in her dress, veil, hair, makeup, shoes, jewelry … the list goes on. Grooms can have just as much fun showing off their personalities on their big days.Here are a few ideas to get your creative juices flowing. 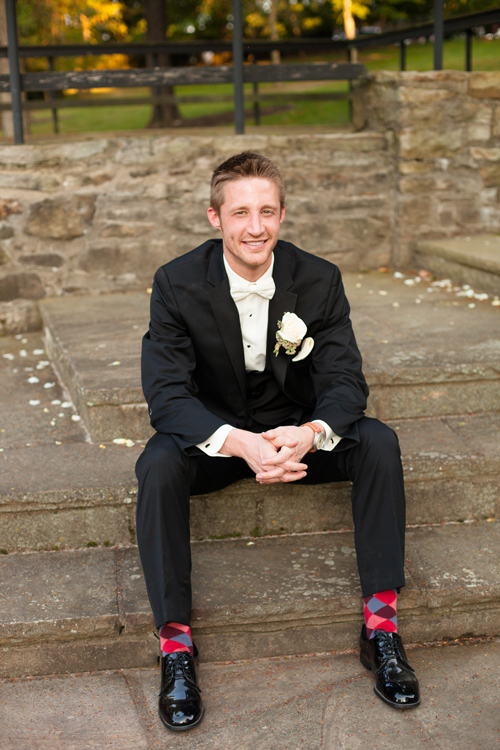 Not long before his wedding to Ashley Leichtenberger on Sept. 20, 2014, Ben Harris started changing it up in the sock department, favoring bright colors and interesting patterns over the traditional solids. While shopping with his bride-to-be, Ben decided the socks would be a great place to add some personality to the black-and-white wedding tuxedos.He loves red, so the color pop was a no-brainer. 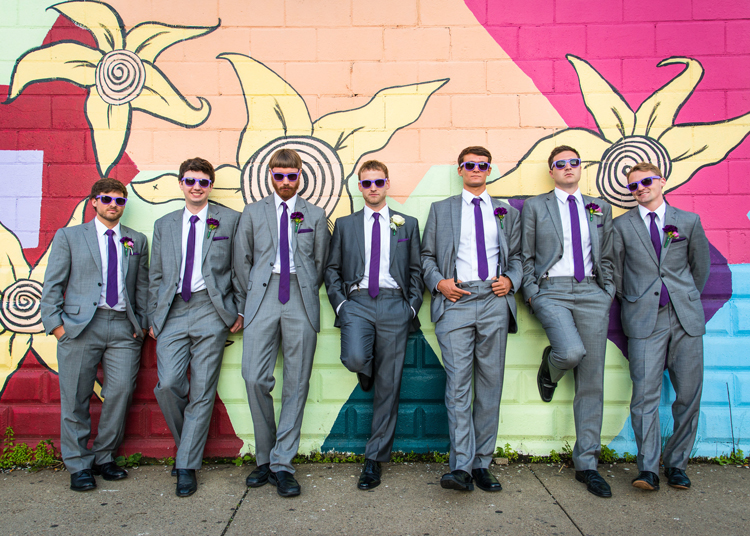 Robert Jack was the mastermind behind his June 13, 2014, wedding’s purple-and-silver color scheme as well as all of the style choices for himself and his groomsmen. They wore purple Wayfarers as a tribute to a black pair Robert wears often. “The Wayfarers are a classic with a modern pop of purple,” says his wife, Alyssa. “He also chose the socks and the super-thin suspenders that all of the groomsmen wore, which again mixed a classic style with modern touches.” At the reception, Robert took it one step further by changing into a bolo tie to celebrate the couple’s coming move to Texas. “It was a funny nod to the new stage of our lives,” Alyssa says. 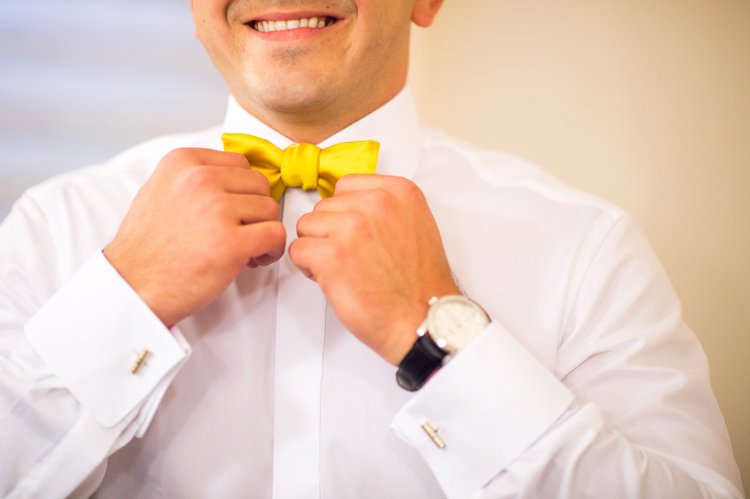 Put a Bow on It

Julian Andronic’s upbringing inspired his ensemble for his wedding day on Aug. 23, 2014. “Julian is from eastern Europe but spent most of his young adult years in Virginia — where bow ties are commonplace,” explains his wife, Alison. Julian’s groomsmen wore silver ties, so he decided to stand out from the group by adding sunny yellow accents. Both the bowtie and the matching pocket square were custom-made at Joseph Orlando in downtown Pittsburgh. 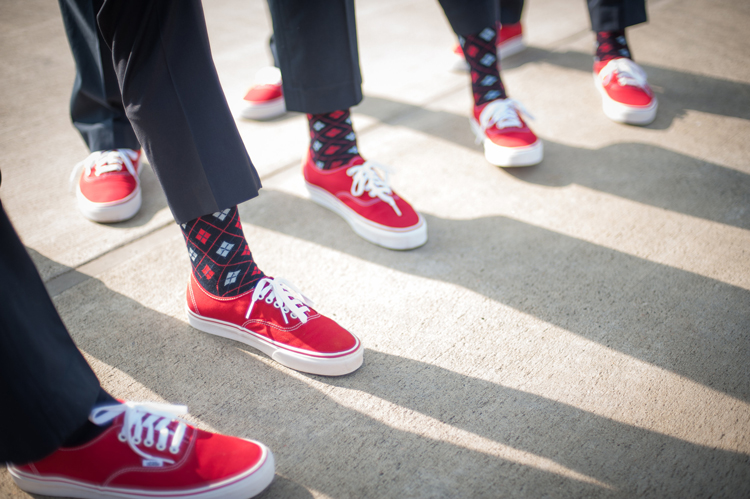 Because they live in Los Angeles, Mike Metz and his wife Lindsay wanted a non-traditional wedding with a California feel. “We wanted aspects to reflect our personalities,” says Mike of their wedding on Sept. 20, 2014. “For me, that means a schmancy navy tux and … Vans. I wear Vans all the time on non-wedding days, so why not today?” Not to be left out, Lindsay, a Pittsburgh native, and her bridesmaids all changed into Vans for the reception. Mike says he also wanted to do his groomsmen a favor by including an outfit element that they truly would be able to wear again. 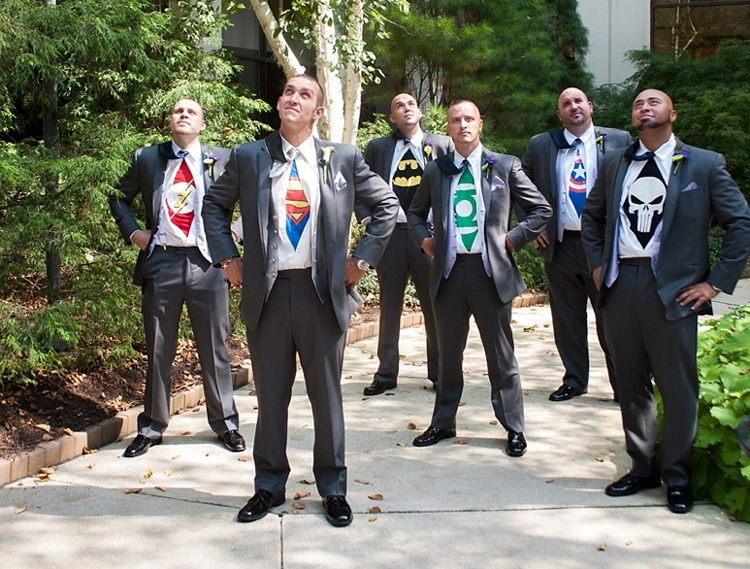 Be Your Own Hero

Ben Susan’s bride bought a Superman T-shirt for him, saying he is her superhero. That gift gave Ben the idea to share the fun with his groomsmen at the wedding on Aug. 30, 2014. He presented the groomsmen with their own shirts — all different, and each bearing the likeness of a superhero that reminded Ben of its recipient. The wedding photographer snapped a shot of the men in formal attire, with their dress shirts unbuttoned and their superhero shirts showing through underneath. “That picture is one of our favorites from the day,” says Lauren, the bride. “My husband will always be there to ‘save my day!’” 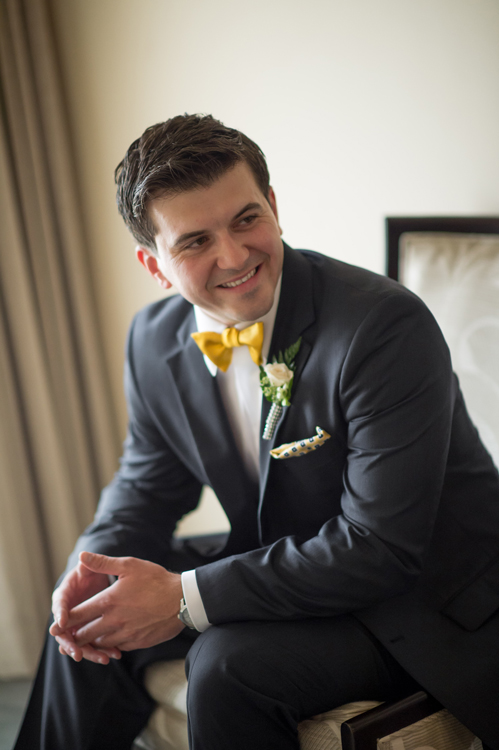