‘Her Things’ Hurls You Over the Fourth Wall

The interactive theater production “Her Things” is the most fun you can have this weekend. 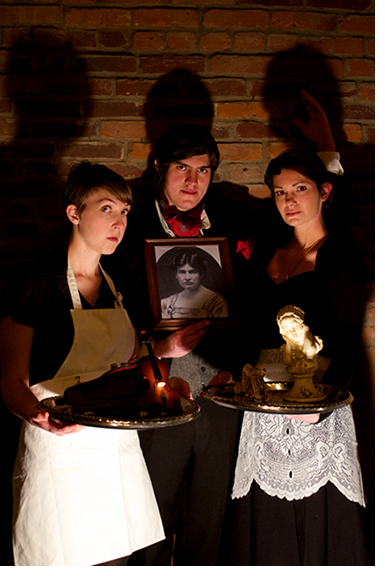 Hey, I’ve got an idea for something to do this weekend: Want to go to a mysteriously deceased woman’s room and rummage through her personal effects? Grill her confidants about her death, trying to piece together the mystery of a troubled life? That sort of thing?

Because that’s totally on the table.

We’ve previously chronicled the rapidly expanding world of interactive theater in this space, with looks at Bricolage's "STRATA" and The ScareHouse Basement. Among the handful of performers who appeared in both of those productions is Ayne Terceira, a veteran improviser frequently spotted at comedy venues around town. Inspired by those experiences and other works that trade in mystery and exploration, Ayne decided to create an immersive event of her own.

“Her Things: An Interactive Estate Sale,” playing through Saturday at ModernFormations Gallery, takes you inside the home of the recently departed Willa Ballard as her worldly possessions are auctioned off. You’ll have the chance to look them over, of course — open the drawers, read the letters, rifle through items hidden and mysterious. Who’s going to complain? When it comes time to bid, though, you’ll learn that it takes more than cash to solve some riddles.

As you begin trying to piece things together, you’ll be helped (or hindered) by an officious, occasionally sinister representative of the estate (played by Brett Goodnack), an enigmatic-yet-friendly maid (Ashley McKinney) and her more down-to-earth compatriot (Renee Rabenold). Another pair of performers, Justin Vetter and Tamara Siegert, turn up later, but I won’t spoil the surprise on their identities.

The cast is made up of skilled improvisers who will answer your questions, tell you about their lives and memories, and hint at the truths you’re yet to uncover. As the evening progresses, you’ll forget that these are performers and find yourself forming alliances with some and provoking arguments with others; the commitment of the cast to the illusion (and the game) at hand is so convincing that it was tough for my mind to accept that they weren’t real. Each gives an absolutely remarkable performance. You’ll find yourself turning the characters over in your mind days later.

There’s no one way to proceed through the event, and even the most studious participants will walk away having uncovered only a fragment of the mysteries in the room. By the end of the performance I saw, several audience members had begun collaborating on a grand theory; even after teaming up, though, there were aspects we couldn’t begin to explain.

The essential thing: “Her Things” is ridiculously fun, from beginning to end. Even sheepish attendees will quickly find the voyeuristic delight in combing through Willa’s stuff and quickly find themselves stalking characters around the room to eavesdrop on private conversations. By the time you start needling the performers on points of contention or rounding up posses to throw out accusations, you’ll realize that this goes beyond any definition of theater — even interactive theater — you know. The “Her Things” website describes the show as “a live video game, really,” and that’s very accurate. Even if you attended every performance, though, I don’t think you’d fully crack the code.

I can go ahead and guarantee that “Her Things” is the most fun you can possibly have in Pittsburgh this weekend. It’s also another harbinger of my favorite growing trend in the city’s art and theater scene — events that coax you into not just taking in a work of art but having a moving experience. If we’re lucky, there will be events like “Her Things” happening on a weekly basis a few years from now.

Even if that happens, though, most of them won’t be nearly as awesome as this one.