The Steelers' All-Pro, all-class tight end lets his play do the talking. 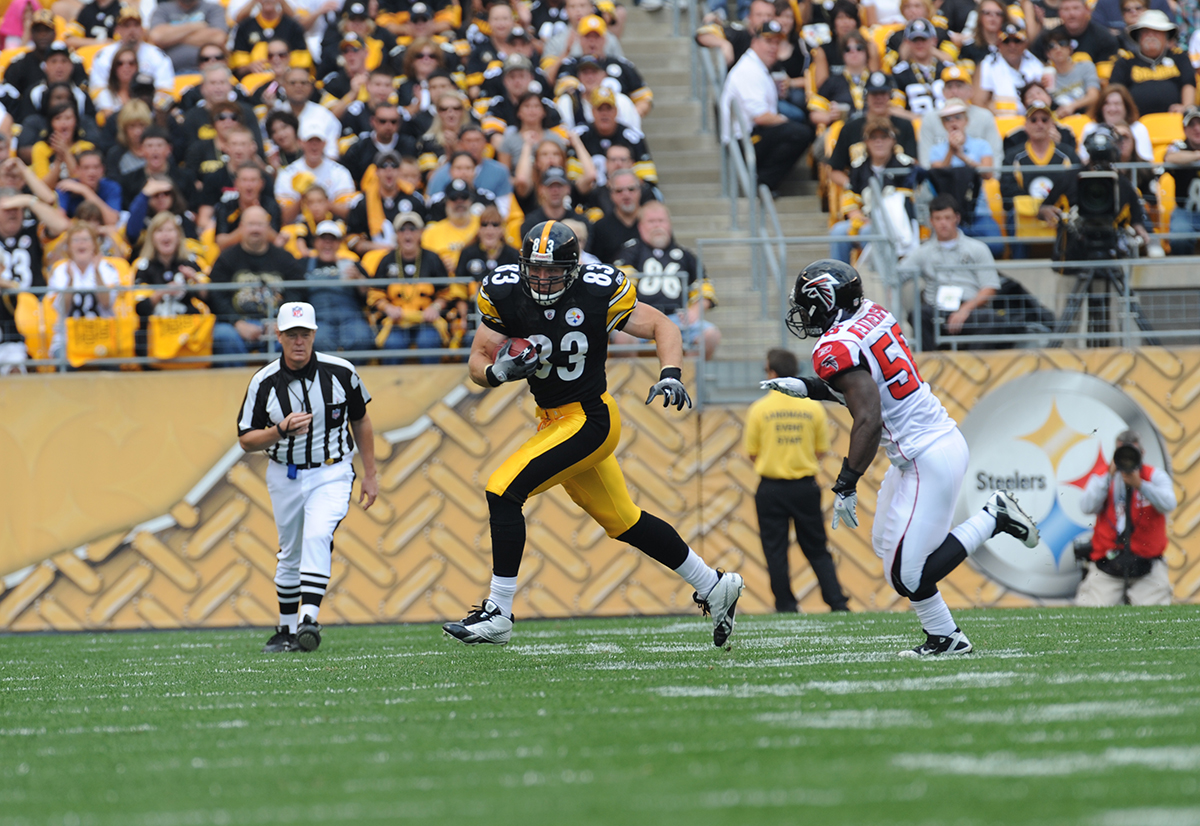 Heath Miller doesn’t like to talk about himself. But ask anyone else about him, and you’ll get an earful. In Swords Creek, Va., a tiny mining town just 40 miles from the Kentucky border, everyone has a favorite story.

For Doug Hubbard, Miller’s former football coach at Honaker High School, it’s the one about the dirt snowball. In 2000, Miller was the Honaker Tigers’ star quarterback when tensions started to boil over during a state playoff game. Miller just completed a crucial first down to his wide receiver, who was slammed hard onto the turf. So hard, in fact, that Miller’s teammate picked a clump of dirt and grass out of his face mask and whipped it at the opposing defender to taunt him.

When the receiver returned to the huddle, Hubbard recalls, Miller turned to him and said softly and simply, “If you ever pull something like that again, you’ll never get another pass from me.”

“That was the kind of leader he was,” Hubbard says. “There would be times when we ran the option and Heath could have just strolled right into the end zone, but instead, he tossed the ball back to a teammate and blocked for them just so they could score.”

Even after converting to tight end at the University of Virginia and going on to win the John Mackey Award (given to the college football’s best at the position), plus two Super Bowl rings and a trip to the Pro Bowl with the Steelers, Miller hasn’t forgotten home. Every year since being drafted in 2005, he used his Reebok endorsement money to buy cleats for the entire Honaker football team.

“I’m not sure Heath even understands how much that meant to our kids,” Hubbard says. “I see students that don’t even follow football walking around the hallways of the school wearing Heath’s No. 83 jersey.”

For Hubbard, Miller’s character evokes memories of Steelers legend Jack Lambert, who on the outside may seem nothing like the mild-mannered tight end. “Chuck Noll once made the comment that Lambert was a defender of what is right in the world,” Hubbard says. “And I think that statement is the best way to sum up what Heath is all about.”

PM: Be honest. What’s harder: blocking Ray Lewis or keeping your 2-year-old son entertained?
HM: Oh gosh, my son is all over the place right now. When I come through the door every day, he doesn’t even say hello to me—he immediately goes and finds a ball. He holds it up and says, “ball.” That’s one of the few words he can say. When I’m home, I’m chasing him and throwing balls around the house all day.

Do you have to suffer through any kids’ TV shows?
Absolutely. “Yo Gabba Gabba” is the favorite. Actually, we went to the [live-action] “Yo Gabba Gabba” show in Pittsburgh. LaMarr Woodley and some of the other guys took their kids, too, and they got up on stage and started dancing with the crew. It was pretty entertaining.

Why didn’t you get up on stage?
I didn’t want to ruin the experience for my son.

Who is your closest friend on the team?
Off the field, it’s Brett Keisel.

Did you encourage Brett to grow that magnificent beard?
No, but I bought him a beard comb a few weeks ago for that thing. He needs to use it.

What’s his secret? Does he borrow Troy Polamalu’s Head & Shoulders conditioner?
I hope so. I’m not trying to get close enough to him to see if it stinks or not.

When you came out of college, scouts had you pegged as a pass-catching tight end whose only weakness was blocking. Now, you’re arguably the best blocking tight end in the NFL. How did that happen?
I was always pretty confident in my ability to block, but the longer I’ve been in this league, the more I’ve realized that hard work is the way you stick around. Every year, you see so many talented guys come and go. I take pride in doing whatever I’m asked to help the team win.

Being in the trenches also has its drawbacks. Troy has expressed concern about the serious effects of concussions. Does it ever worry you?
Yeah, certainly. The reports coming out about the long-term effects you have from this game definitely make you think twice when you go home and look at your son. I want to be around to see the person my son grows up to [be] as an adult. It’s a tough situation that we’re all trying to educate ourselves about. I know this game won’t last forever.

What do you want Steelers fans to remember about you at the end of your career?
Hopefully that I gave everything I had to the team. And that I was respected not only as a player, but also as a person.

Favorite restaurant in the 'Burgh: Any steakhouse.

Most-played song on your iPod: Anything by Pearl Jam.

This article appears in the December 2010 issue of Pittsburgh Magazine.
Categories: From the Magazine, Steelers