The LGBTQ-friendly variety show offers one of the city's most unusual (and often unforgettable) lineups of comedic talent. 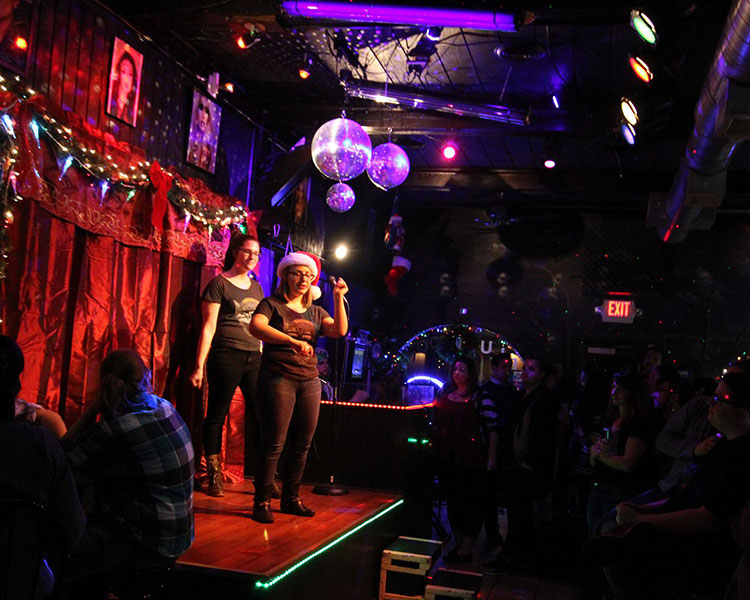 Comedy is unusual in that practicing, ideally, needs to be public. If you’re a stand-up experimenting with new material, you must try it out on an audience; you can write all you like, but you need to see how people respond. If you’re an improv group, you can rehearse, but your act won’t truly be tested until you take the stage.

For that reason, new ideas are often hard to come by. Those experimenting with forms or trying new things must often do so on more underground stages — and by the time those fresh ideas are ready for a show, they may be watered down or otherwise softened. This isn’t inherently a bad thing. But it can make truly off-the-wall shows a bit hard to find.

That’s a big part of the reason why I’m so enamored with the Quick and Shameless Comedy Hour, a monthly showcase at Blue Moon in Lawrenceville. Launched last June, Quick and Shameless was designed to spotlight LGBTQ and ally acts and performers in the comedy scene — and also to serve as an environment where experimental and otherwise off-the-wall ideas are not only permitted, but encouraged.

“It’s not about shock value; it’s about redefining what comedy in Pittsburgh means,” says Frank Joseph McDade, an improviser and frequent performer at Quick and Shameless. He created the show along with fellow performers James Jamison and Michael Quigley (who hosts the shows as Qarma Kazee). “Often, there are times when we’re booking shows for a month where we will have to push a ‘more traditional’ act to another month to make room for a new, fun and out-there idea.

“We like to use the gauge of ‘Would John Waters enjoy this act?’”

In my visits, that has included sketch, improv, drag and stand-up acts. But it has also included an elaborate bit with improvisers taking on the personas of poorly crafted taxidermy animals projected on screens above the bar. Interactive performer and playwright Ayne Terceira assuming a half-dozen characters in a fully improvised musical drama, completely alone. Stand-up comic Ian Insect beginning his own jokes before improvisers interrupt to riff new punchlines.

I left one show with a pocket full of seashells, and I honestly can’t remember why.

While the show does make LGBTQ performers and groups a key component, it’s more broadly about openness and inclusion — both personally and artistically. “The initial intention wasn’t to showcase acts who felt they were underrepresented in other venues, but to bring together a variety of diverse acts that you may not necessarily see doing a comedy show together,” Quigley says. “We always wanted to include LGBTQ acts in every show; in fact, from day one we always loved the idea of having a drag queen act performing right before or after a traditionally ‘straight’ act.

“That’s not something you see in the majority of comedy shows, not just in this city, but in general.”

Both Quigley and McDade cite a summer 2015 show featuring a full lineup of female performers as the point at which Quick and Shameless started to catch on. “There are so many insanely talented women in this city, and being able to showcase that was very important to me,” Quigley says. “I’ve been drawn to female comedians and performers my entire life.”

“The response was overwhelming, and the audience was so vocal about how much the show meant to them,” McDade adds. “Why? Because you don’t see large groupings of female comedians — just as you don’t [with] LGBTQ performers.”

The show’s growing success means that we’ll likely see more events and projects under the Quick and Shameless banner in 2016. McDade and Quigley mentioned filming more sketches (another staple of each monthly performance, as short films are aired mid-show) and finding a venue to cater to performers and audiences not yet old enough to attend a show at a 21-and-up establishment as goals for the new year.

The next installment of Quick and Shameless is set for 8 p.m. tonight. If you go, you’ll see musical improv, drag, short films and who knows what else. It’s a night unlike anything I’ve seen in Pittsburgh, and speaks very well for the diverse future of local comedy.

Just arrive ready for anything and you’ll be set, Quigley says. “The beauty is that, even if [an act] doesn’t go the way you’d hoped, the crowd will always be supportive — and happy to see that you went for it.”