He Tries to be a Blessing to Someone Every Day 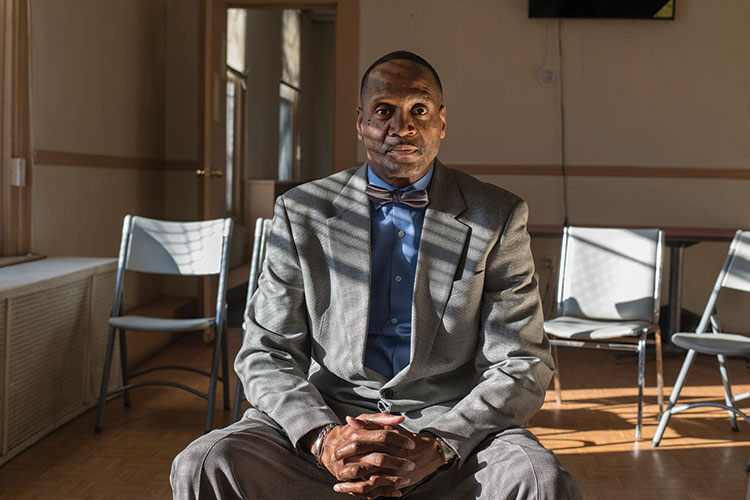 At the historic Centre Avenue YMCA in the Hill District, Doug Williams has no specialty. Or, perhaps, he has too many: program coordinator of housing, head cook, case manager, operator of a free store, organizer of an eight-week life skills course.

“I am a very resourceful kind of guy,” he says, in a bit of pronounced understatement.

Williams arrived at the Y in 2012 as a cook. He soon implemented breakfast and dinner service for the 70-plus men who live in the building’s dormitory-style housing. “You could see the despair,” he says.

He hadn’t worked at the Y for long before he started sitting down in the computer room, seeing what the men there needed and helping them get it. At the time, Williams was working toward his associate’s degree in social work at the Community College of Allegheny County.

More importantly, he could relate to their struggles. Williams once had been where those men were.

While growing up on Larimer Avenue, he started drinking and smoking marijuana when he was in junior high. Then pills, cocaine, heroin. Fatherhood at 16. Twenty years of active addiction culminated in homelessness in his early 30s; he sought another path after six months in jail for robbery. He arrived at the Y with 16 years of sobriety and the 12-step service ethos. “Be a blessing to someone today,” he says. “That’s what I’m in the business of doing.”

Williams shares his story with the men who come in; often, seeing how far he’s come helps them persevere. One man, who grew up with Williams, recently arrived at the Y.

“Now I’m in the right place,” he told Williams. “If you can manage to come up in your life like that,” then he could, too.

Aaron Gibson, Williams’ supervisor, also grew up with Williams. “We went in two different directions,” Gibson says. When Williams showed up at the YMCA, Gibson thought he deserved another chance. “I was in the position to give him the opportunity. He’s been very, very successful. We haven’t been seeing guys come back” for repeat services after transitioning out, he says.

Williams is now working toward earning his bachelor’s degree from Geneva College. “The excitement for me is that I just give away my experiences,” he says. Those experiences are also on display in his packed office: Almost 30 signed T-shirts from organizations that have invited him to serve. His most prized is from Homewood Community Sports, a youth mentoring program he directs.

At the Y, Williams says, “We work on getting the people who stay here every amenity that a human should have that lives in a regular home.” He’s stocked the facility with overflow from the Salvation Army, churches, closing stores and people’s basements: furniture and bedding, two refrigerators and a stand-up freezer, equipment for an on-site doctor’s office, breakfast for six months, hot dinners five nights a week for two years — all for free.

Self-sufficiency is the ultimate goal: a job, a driver’s license, a return to family, enrollment in school, whatever it takes. And then to give back, whether at the Y or another community resource.

Many make a return visit after they’re back on their feet. Williams cherishes those appearances, with familiar faces “coming up to the door looking all good and stuff.” They’ll donate food for a cookout or offer to rake leaves. They point to Williams and say to their families, “That’s why we’ve got what we got today.”