He Runs a Fleet of Cabs and One Unique Barbecue

The head of the Pittsburgh Transportation Group has a very tasty side gig. 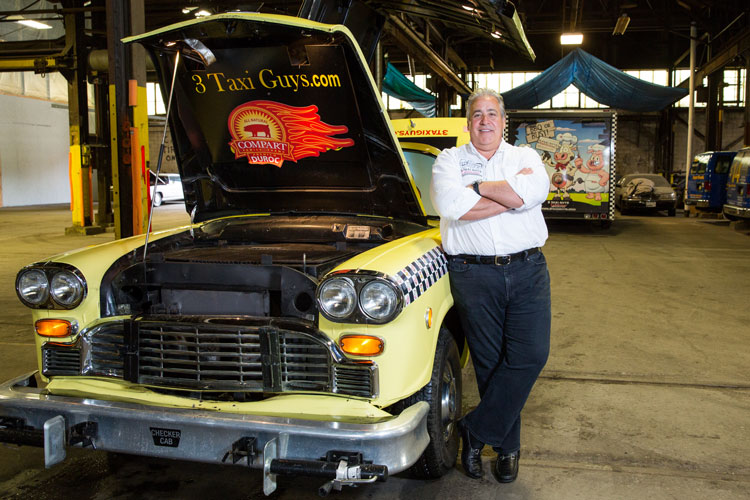 At Pittsburgh Transportation Group’s annual drivers’ picnic, President Jamie Campolongo stands removed from the party to point out the features of one particular vehicle.

“This thing all lights up; there are speakers on the side — we’ll crank out the music,” he says, tapping a trailer affectionately. “Go big or go home.”

No one will be riding to the airport in this taxi, however. The tagline for 3 Taxi Guys, a barbecue-rub and -sauce retailer and competition-barbecue team, is “Cabilicious” — but “go big or go home” could be considered its guiding principle.

The sound-and-light spectacular of the trailer constitutes just half of the company’s mobile real estate. The other half is a full-size smoker built from a former working cab.

For the third year in a row, 3 Taxi Guys journeyed to Tennessee for the Memphis in May World Championship Barbecue Cooking Contest. They wet-cooked nearly 600 pounds of dry-rub meat before the festival closed.

“We’re considered straight-line traditional; we really don’t even serve sauce to the judges. You can hide a lot with sauce. But this is bare-naked barbecue, baby. If it doesn’t taste good, they’ll know it as soon as they try it.”

The 3 Taxi Guys — Campolongo, Rick Hewatt from Atlanta and John Lazar from San Francisco, all taxicab executives — discovered a shared love for barbecue over a campfire in 2008. It might have remained a club of backyard aficionados were it not for Campolongo, who bought a domain name and built a website.

“I like building stuff better than running stuff,” he says.

As head of Pittsburgh Transportation Group, Campolongo does both. After Uber and Lyft changed the rideshare market, he retooled the way the company offers services; a new app offers on-demand rides as well as a feature that allows booking in advance.

“We sat in a non-competitive marketplace for a long time, and we learned a huge lesson,” he says.

Switching back to barbecue, Campolongo says he’s made all of the common mistakes. Unlike most people, he seems to know how to turn those experiences into something delicious.

This article appears in the July 2015 issue of Pittsburgh Magazine.
Categories: Business